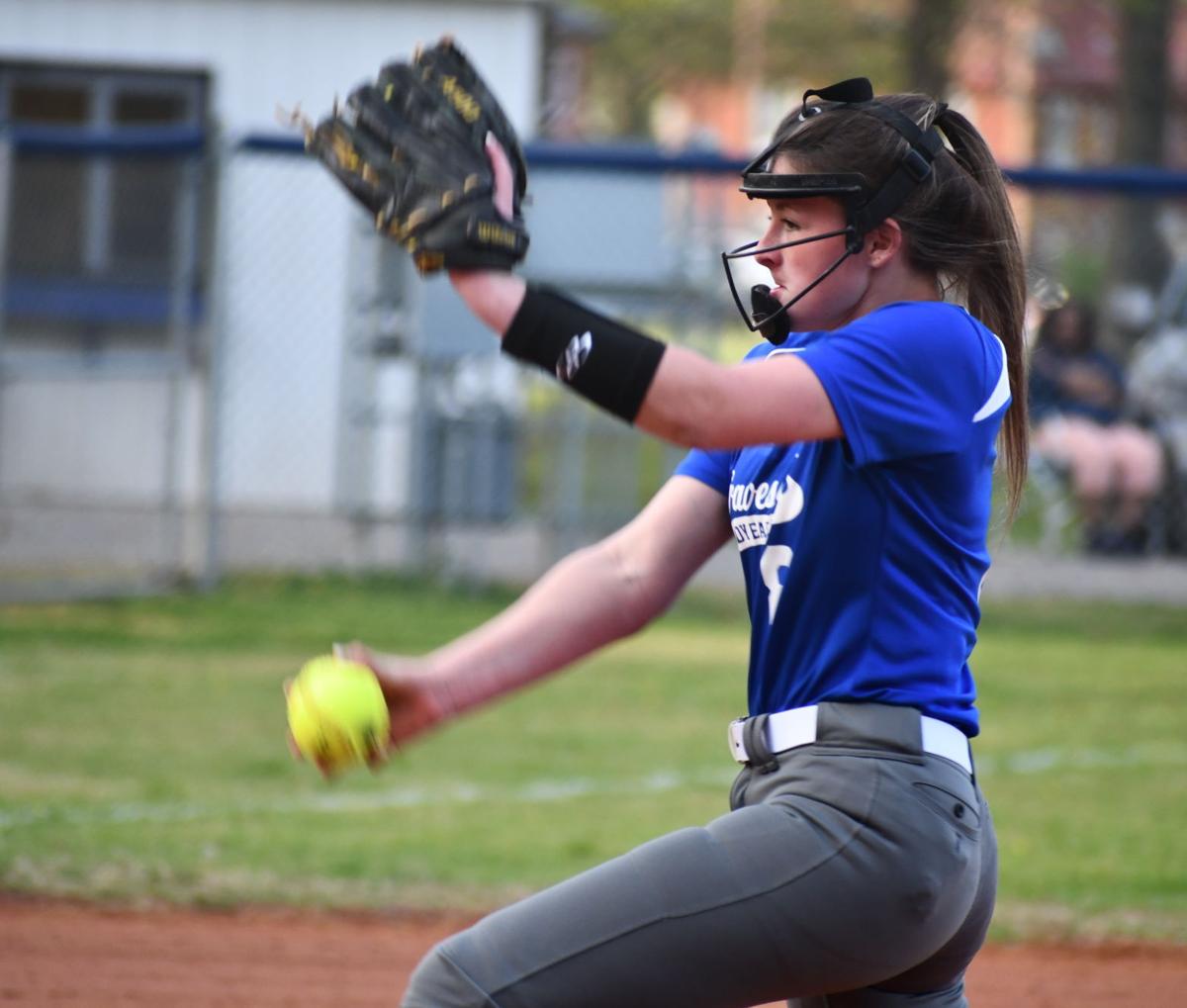 Graves County freshman Bailey Wimsatt winds up to throw a pitch during Monday’s game at Paducah Tilghman. Wimsatt threw a four-hitter and had 15 strikeouts in the Lady Eagles’ 8-2 win. 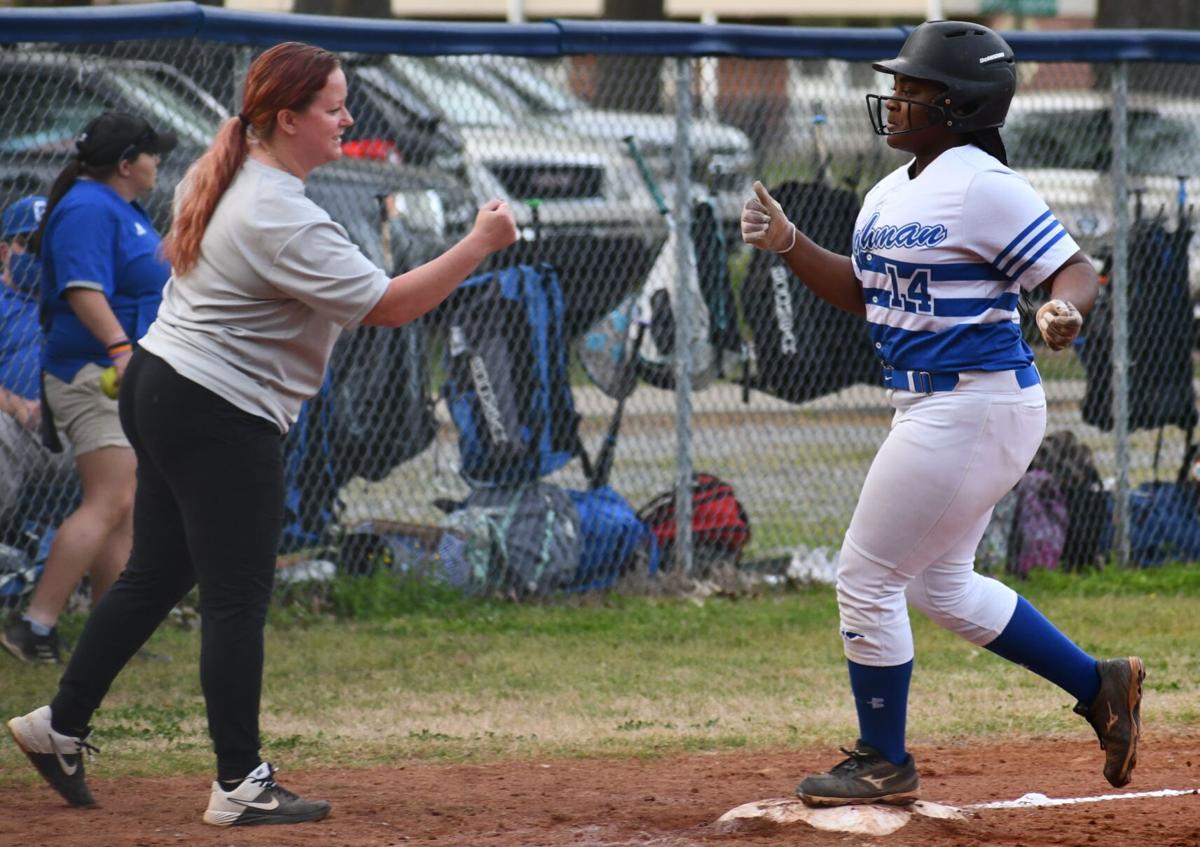 Paducah Tilghman sophomore Jada Knox crosses third base to get a fist bump from head coach Sarah Trover after hitting a solo home run in the second inning of Monday’s game against Graves County.

Graves County freshman Bailey Wimsatt winds up to throw a pitch during Monday’s game at Paducah Tilghman. Wimsatt threw a four-hitter and had 15 strikeouts in the Lady Eagles’ 8-2 win.

Paducah Tilghman sophomore Jada Knox crosses third base to get a fist bump from head coach Sarah Trover after hitting a solo home run in the second inning of Monday’s game against Graves County.

As a softball coach, you know you have a talented pitcher when she records 15 strikeouts despite not being at her best. Graves County head coach Scott Tucker said that was the case for freshman pitcher Bailey Wimsatt on Monday at Paducah Tilghman.

“Truthfully, she wasn’t as sharp tonight as she was the past two games,” Tucker said of Wimsatt, who pitched all seven innings and allowed just four hits and a walk to go with the 15 strikeouts in the Lady Eagles’ 8-2 victory.

To Tucker’s point, the four hits and two runs were the most Wimsatt had given up in three games this season. She threw a no-hitter with four walks and 13 strikeouts in a 10-0 win over Mayfield to open the season and followed that with a 17-strikeout performance while giving up just two hits and one walk in a 10-0 win over Ballard Memorial.

It was much the same Monday at Tilghman despite not having command of her full repertoire of pitches.

“There’s no question she threw an awesome game, but she was having a little trouble getting her curveball to move, and she had a little trouble with the rise ball early, so we went with mostly fastballs and changeups. And it worked — she throws hard enough that she can get away with it,” Tucker said.

There was some concern in the bottom of the fourth inning when Wimsatt appeared to be suffering some abdominal pain, but she battled through it.

“We thought she had pulled something, but we think she just had a little upset stomach,” Tucker said.

Tilghman (2-2) had trouble connecting on Wimsatt’s pitches, but head coach Sarah Trover didn’t leave the game too concerned about her team’s hitting abilities.

“Her changeup was something we were struggling with,” Trover said. “We’re still struggling with some pitches at the plate, but I’m not really worried about it.”

The Lady Blue Tornado’s biggest hit of the night came off the bat of sophomore Jada Knox, who hit a solo homer over the left-field wall to lead off the second inning and cut into a 4-0 deficit. But Wimsatt responded by striking out the next three batters.

Tilghman cut the lead to two, 4-2, in the bottom of the fifth inning after sophomore Trinity Parrish reached on an error. She was replaced with a courtesy runner in seventh-grader Myiesha Smith, who advanced to second on a groundout, stole third and then scored on a Lady Eagle error on a bad throw to third base.

The comeback was stifled in the top of the sixth, however, as the Lady Eagles (3-0) padded their lead with four more runs. Seventh-grader Ginger Martin had an RBI single that was followed by a two-RBI triple from sophomore Ebonee Bell. Another run scored on a bunt from junior Abbey Williams.

Tilghman mustered just two hits — a single from Knox and a double from senior Nikayla Donaldson — in the final two frames as Wimsatt closed out the victory by getting four of the final six outs via strikeout.

“We have a lot of kids who haven’t started on varsity before, so I’m very tickled,” Tucker said afterwards of his team’s 3-0 start.

In addition to their big sixth inning, the Lady Eagles put up four runs in the first frame thanks in large part to some sloppy fielding by Tilghman.

Graves recorded no hits in the inning but did draw three walks while taking advantage of four Lady Tornado errors for the early 4-0 lead.

“That’s kind of been the story of our last two games is we’ve made a few mistakes, and that’s led to teams executing on us,” Trover said. “This game was a winnable game, but those little errors are what really cost us.”

The pitching duo of senior Hannah Scott and freshman Reagan Hartman otherwise fared fairly well. Scott got the start and allowed four runs on one hit and three walks while striking out two over three innings. Hartman pitched the final four frames, giving up the other four runs on five hits, a walk and a hit batter to go with five strikeouts.

The Lady Eagles notched just two hits from the second through fifth innings.

“Our bats went flat after that first inning — we couldn’t hit anything,” Tucker said. “The lefty (Hartman) came in, and we had trouble with her.”

After the game, Trover said the end result and her team’s .500 record doesn’t have her discouraged in the least.

“I have really good expectations for this team,” she said. “We’re spending these first few weeks learning and growing and figuring out who’s fighting to be out there. That’s something we haven’t always had is the depth to play lots of girls off the bench. And every single person in our lineup can hit the ball. We’re going to look to keep executing the little things and cleaning up those errors, and I feel like we can definitely be a contender for our region.”