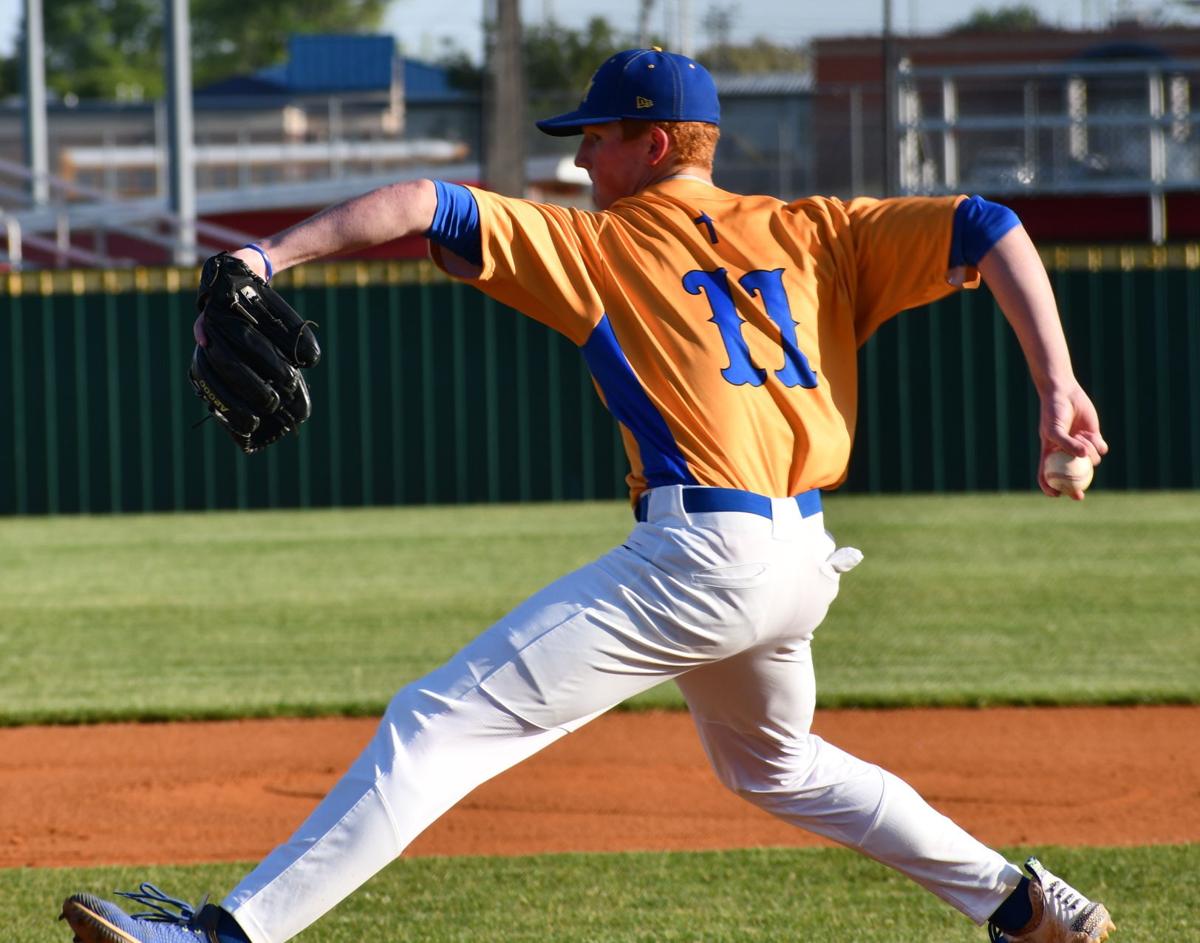 St. Mary’s Parker MacCauley winds up to pitch during one of the Vikings’ games earlier this season. MacCauley plans to pitch and play around the infield in college at Tennessee Tech. 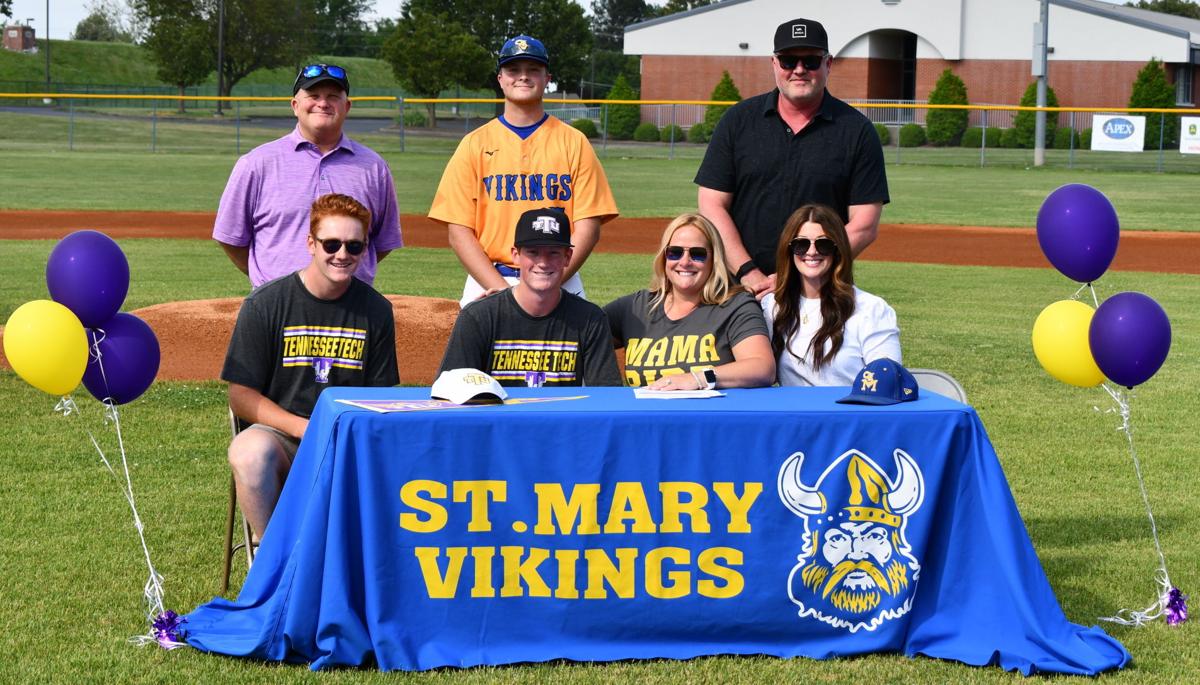 St. Mary’s Parker MacCauley winds up to pitch during one of the Vikings’ games earlier this season. MacCauley plans to pitch and play around the infield in college at Tennessee Tech.

It’s hard for coaches to take notice of your talent when you’re not on the field. That was the case for high school athletes in the spring of 2020 — their seasons were canceled amidst the COVID-19 pandemic.

For St. Mary’s Parker MacCauley, that missed year came after he was forced to sit out much of the previous season due to injury. But he didn’t let any of that stop him from achieving his dream of playing collegiate baseball at the Division-I level, as he recently signed to play at Tennessee Tech University.

“The past couple years, with COVID-19 and everything, have been tough. It’s been really hard to find places to play. And I was hurt with an injury in my sophomore year, and I missed about 75% of that year too. That was hard, for sure,” MacCauley said. “So to have this opportunity is pretty special to me. I’ve been waiting for a while. I feel like I’ve worked pretty hard, so I’m excited to be able to do this.”

MacCauley spoke with The Sun after signing his letter of intent during a ceremony on the Vikings’ home field prior to their game against Mayfield on May 25. He said his participation in summer ball played a big part in getting him the exposure he needed to play in college and was thankful for the opportunity to play at the NCAA Division-I level.

“It was definitely difficult for coaches to see everyone, so I really lucked out, and I’m pretty happy to be where I am,” he said. “It’s just always been a goal of mine, so it’s pretty special to me to achieve that goal, and I’m really excited.”

St. Mary head baseball coach Chris Haas said the signing meant a lot to him after having coached MacCauley since his T-ball days.

“You could see natural talent and ability in Parker, and I’m proud of how hard he’s worked to get to where he is today, and I’m looking forward to seeing what he can do at the next level,” Haas said.

In signing to play at TTU, the 6-foot-3 MacCauley joins his brother, John, as a Division-I baseball player. John MacCauley is a 6-foot-2 redshirt junior pitcher at Butler University, and Parker credits him for helping him achieve his goal.

“My brother is always pushing me, and he said I could do it (play D-I),” he said. “He’s taught me to compete and push through everything when adversity strikes. He’s been a great role model of mine and my No. 1 fan, and he’s always pushing me every single day. I definitely wouldn’t be here today without him.”

Haas has been another important presence in MacCauley’s baseball journey.

“I can’t even explain to you what all he has done for me,” MacCauley said. “Playing T-ball ever since I was 4 years old, he’s been my coach my entire life pretty much. He’s not just a baseball coach. I can always go to him with anything. He’s taught me many life lessons along the way. He’s always teaching us not just to be better baseball players but also better people in life, which is big.”

Haas said MacCauley has meant just as much to him and the St. Mary baseball program.

“He’s a good kid with a good attitude, and he comes ready to play every day,” he said. “You never have any worries or any troubles out of Parker. He has a lot of natural ability, and he’s ready for the next stop.”

That next stop is Tennessee Tech, which is located about 80 miles east of Nashville in Cookeville. MacCauley, who plans to major in business, described TTU as “the best fit” among the schools he was considering.

“The coaches and I seemed to have a pretty good connection. They’re great coaches and great guys,” he said. “I’ve been to visit a few times. It’s just a really fun atmosphere to be at. I’ve been to a few games, and it was really fun watching them. It was really just a fit thing for me, and that’s where I feel like I belong.”

MacCauley added that the Cookeville community is “really supportive” of the TTU sports teams.

“There were a lot of people at their games supporting them, which is really cool to see,” he said. “It’s a good school. It’s a little smaller — it’s not huge like a big university — which I’m kind of used to having gone to a small school my whole life. I just went and fell in love with it, and I think that’s where I’m supposed to be.”

MacCauley plans to continue splitting time as a pitcher and infielder at TTU and said this season has really helped him prepare for that role.

“I’m going to be hitting there (at TTU) too, but pitching is my thing,” he said. “So getting a lot of innings in and getting more reps this season has been big.”

Looking back, MacCauley’s baseball career began with T-ball and continued into travel ball with the Paducah Storm. He now plays for Knights baseball out of Nashville.

MacCauley has also played basketball and soccer for the past four years but said baseball is “definitely” his favorite.

He likes being a three-sport athlete, though.

“I think it’s important to play more than one sport. It helps your body become more athletic, and it’s a good way to stay in shape,” he said. “It’s been a ton of fun for me to play three sports here. It’s been a big part of who I am, and I wouldn’t trade it for anything.”

Now focusing solely on baseball, MacCauley is ready to do whatever the Golden Eagles need of him.

Because of the strong veteran presence on the team, he doesn’t expect to play much right away but is looking forward to learning a lot about the college game as a freshman.

Haas fully expects MacCauley to excel at the next level.

“He has a plus arm from any position in the infield and has good range. He has a good swing at the plate and good hands. He’ll have success, and he’ll have fun at the next level,” he said. “Parker is capable of playing at that level, and once he really believes in himself and gets settled in there at Tennessee Tech, he’s going to be just fine. If he can get a good pitching coach at the college level to help mentor him, he has the talent and abilities to have success at the next level. I’m excited to see how it develops.”