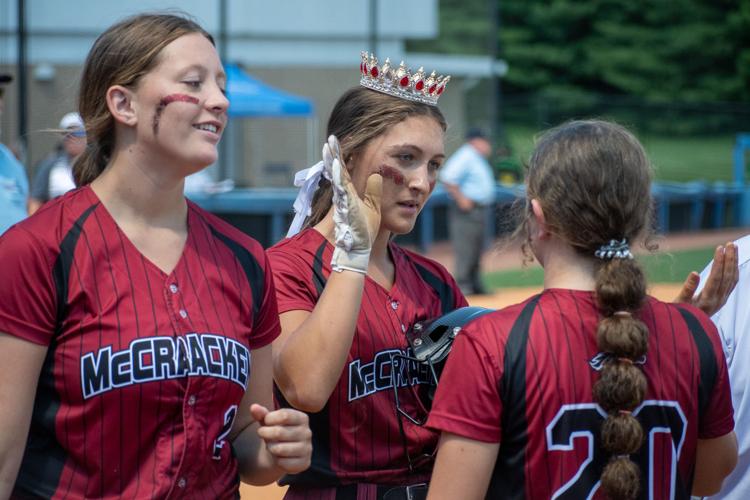 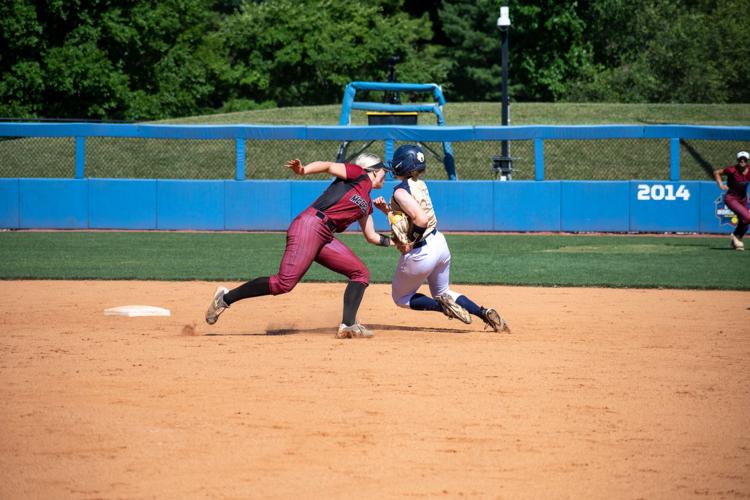 McCracken County's Ally Hutchins tags out the Elizabethtown runner in the bottom of the seventh inning for the first out. Hutchins earned the 9-6 win for her performance in the pitching circle on Friday afternoon.

McCracken County's Ally Hutchins tags out the Elizabethtown runner in the bottom of the seventh inning for the first out. Hutchins earned the 9-6 win for her performance in the pitching circle on Friday afternoon.

LEXINGTON — On Friday afternoon, the McCracken County Lady Mustangs returned to John Cropp Field for the first time since the heartbreaking loss last season for the first round in the KHSAA 2022 Fast Pitch Softball State Tournament.

With their motto being ‘Unfinished Business,’ the Lady Mustangs took a 9-6 victory over the Elizabethtown Lady Panthers to punch their elite eight-round ticket.

Although the Lady Panthers took a 2-0 lead in the bottom of the first inning, junior Ally Hutchins struck out three in the pitching circle. However, the Lady Stangs plated a run in the top of the second as Annie White knocked an RBI single to center field to score Addyson Morgan.

The Panthers added a run in the third inning as Alyssa Philpot doubled to left field while Hannah Riley scored on an error by McCracken County. Hutchins struck out the next three batters to get her team back in the dugout despite this.

McCracken County returned the favor in the top of the fourth inning. After being brushed with the pitch, which the umpire called foul, Hutchins knocked a triple on a 3-2 count. Courtesy runner Morgan came in for Hutchins and later scored as White hit a hard ground ball and reached on an error by Elizabethtown.

The scoring continued for the Mustangs as Izzy Story singled to left field, making it 3-3 with one out. Then, Raygan Rodgers reached on an error by the Lady Panthers, allowing courtesy runner Addy Bennett to advance into scoring position. Shortly after, Bennett scored on a wild pitch to give the Lady Mustangs a 4-3 lead.

Ariel Fox, who experienced the loss in last year’s sub-state game, ripped a no-doubt home run to center field to lead off the top of the fifth inning.

As her fellow Mustangs greeted her at home plate, they placed the princess crown on her head to push the game to 5-3.

With one out, KG Walker doubled to center field. Her courtesy runner Anna Kate Hawes and White scored the subsequent two runs on an RBI double by Zoe Smithson.

Although the Lady Mustangs had a 7-3 lead, the Lady Panthers were not giving up heading into the bottom of the inning.

Hutchins ran into trouble in the circle during the bottom half of the fifth with a lead-off single and back-to-back walks before Lilli Schwemmer ripped a line drive to the fence at center field. With an error by McCracken County, Riley, Phoenix Bell, and Heidi Tipton scored to make it 7-6 with zero outs.

After a meeting on the mound with head coach Tony Hayden, Hutchins struck out the next two and induced a pop fly into foul territory that Rodgers snagged in motion from third base.

White replaced Hutchins in the circle for the bottom of the sixth inning. The junior worked two innings and allowed one hit to close out the game while striking out one.

The Mustangs started with Story reaching first base on a dropped third strike in the top of the seventh inning. A single by Smithson moved Story into scoring position, which allowed her to advance to third base on a passed ball. A single by Rhea-Lee Joiner allowed Story and MiKaela Coburn to score and make it 9-6.

With White returning to the circle to close it out, Elizabethtown’s Tipton drew a walk to start the Lady Panthers’ last chance at keeping their season alive.

However, Tipton was caught stealing as Walker threw a bullet to Hutchins at shortstop to get the first out.

The following two outs came as Schwemmer grounded out and White struck out Avery Powers to end the game.

Taytum Spiers took the loss for the Lady Panthers. The eighth-grader worked over six innings in the circle, allowing 13 hits, nine runs (six earned), three walks, and struck out seven.

Kylie McKinney appeared in relief for Elizabethtown. McKinney faced two batters and did not allow a hit or run.

McCracken County will face Holy Cross Louisville on June 10 at 2 p.m. EST at John Cropp Stadium in the second round of the 2022 KHSAA State Tournament.