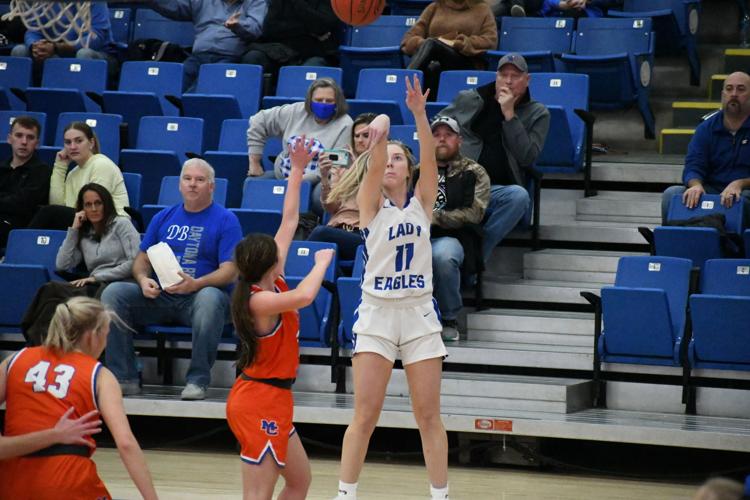 Ann Whikater (11) takes the outside shot as part of her 20-point performance in the Lady Eagles’ 40-36 win over Marshall County. 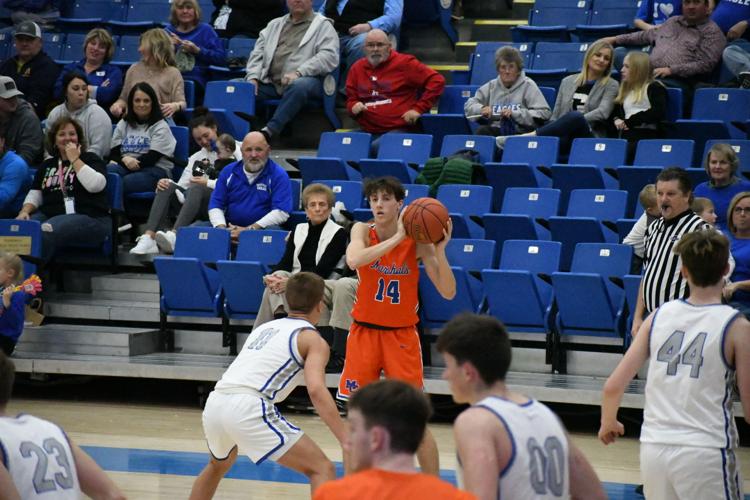 Cole Mills (14) surveys the floor looking for the open man as the Marshals beat out the Eagles in the final game of the night, 71-66. Mills led the Marshals with 17 points.

Ann Whikater (11) takes the outside shot as part of her 20-point performance in the Lady Eagles’ 40-36 win over Marshall County.

Cole Mills (14) surveys the floor looking for the open man as the Marshals beat out the Eagles in the final game of the night, 71-66. Mills led the Marshals with 17 points.

Just over a month to the day, Graves County and Marshall County met on the court of the Marshals for a night of basketball. After lengthy weather delays and a paused game that would have to be played later due to tornadoes in the area, the two met once again on Friday night.

The girls kicked things off with high intensity basketball, a feeling that would remain all night long, as Graves County would claim the victory 40-36. Marshall County struck first and maintained the lead through most of the opening period. They ended the quarter with a 12-10 difference but the Lady Eagles would be ready to change that after the break.

“Our girls have played everybody, and we just have to believe in ourselves,” Graves County head coach Lyndon Dunning said. “I thought our girls battled it out and I feel like our depth allows us to have nights like this where if one girl isn’t playing well someone else is.”

That someone was Anna Whitaker. She led all scorers with 20 points making 11 of her 15 free throw attempts. Nine members of the Lady Eagles put points on the board.

What was ultimately the game changer for the girls was the defense that stepped up when it mattered most for the home team.

Skylar Waller led the Lady Marshals with 19 points to be one of five to put points on the board.

Immediately after the girls, the boys took to the court to finish what wasn’t back on Dec. 10. With just 16.2 seconds left on the clock and The Eagles up one, Marshall County had one last chance to win the game. They brought the ball down the length of the floor, called a timeout to set their play up, took a corner three at the buzzer but it wouldn’t fall. Graves County won 46-45. The night was far from over though, and the Marshals would get their revenge before the night was over.

Each team separated to their locker rooms to compose themselves came back out and gave the crowd in the Eagles Nest a scrappy, physical, high tempo basketball game which resulted in a Marshall County 71-66 win.

A total of 39 fouls were called between both teams plus a technical foul for each team and an intentional foul on the Marshals. The Marshals shot a total of 35 free throws, making 26 of them while the Eagles shot 27, making 19.

It was a battle the whole way through as lead changes jumped back and forth the throughout the game. Graves County held a 16-13 lead after the first period but a technical foul on the Eagles would give the Marshals the lead right back. By the time the half rolled around it was a one-point game in favor of Marshall County, 34-33.

Several Eagles hit the double-digit mark in points with Drew Thompson leading the way with 23 points. Lukas Pigg had 18, Aydan Flint had 12 and Mason Grant had 10.

For the Marshals Cole Mills was the leading scorer with 17 points. Kole Sedlock had 13, Quinn Smith had 12, Colby Schroader had 11 and Wade Moore had 10.

In the end the Marshals shots were the ones that were falling and they were the ones making the big defensive stops to win the game 71-66.