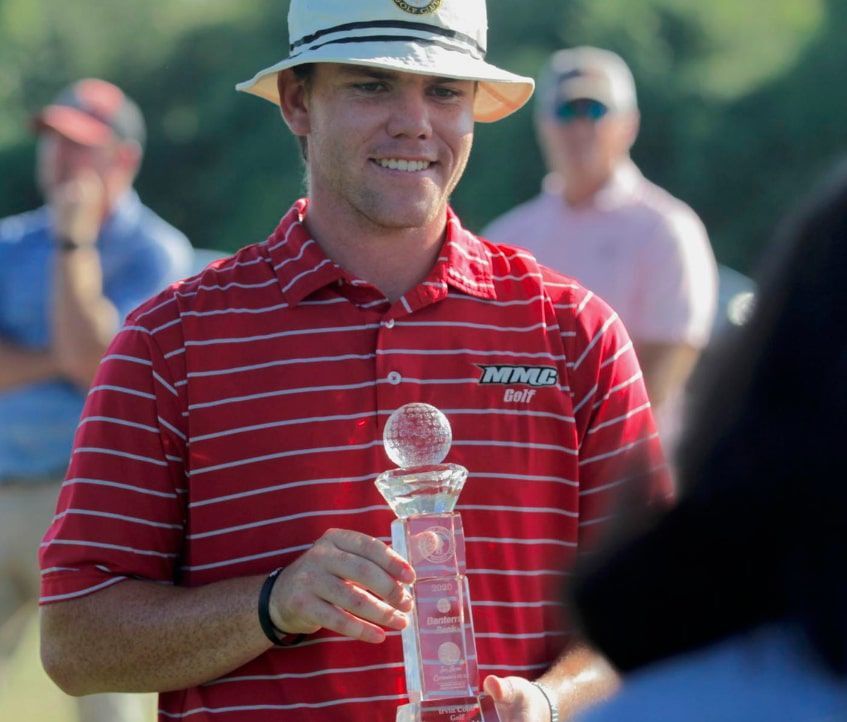 Justin Johns, of South Fulton, Tenn., claimed his first Irvin Cobb amateur title last year by winning a two-hole, sudden-death playoff against Christian Tooley and Avery Edwards behind a par putt on No. 17. All three players fired a 3-under 139 for the two-day tournament. Johns returns to defend his title in this weekend’s Irvin Cobb at Paxton Park of Paducah. 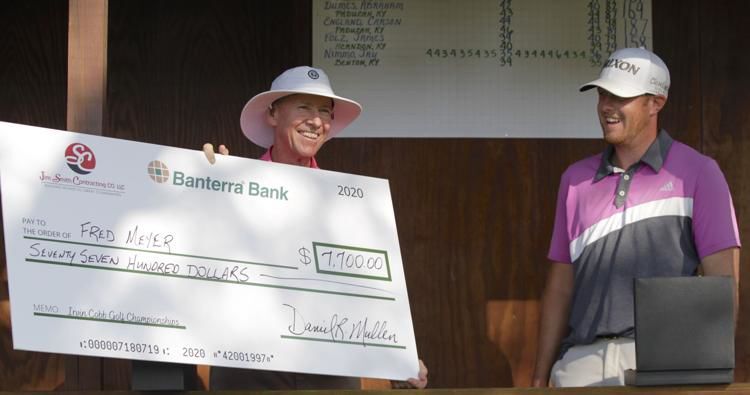 Paxton Park professional Danny Mullen (left) presents a $7,700 cash prize to Wilmore’s Fred Meyer, who won the 84th Irvin Cobb Championship professional title in 2020 after carding a two-day 131 (11-under) at Paxton Park of Paducah. Meyer is again in this weekend’s championship field.

Due to last year’s COVID-19 pandemic, professional golf tours were put in a state of flux and tournaments had to be adjusted weeks and months from their allotted dates. With that, some golfers kept their skills sharp by competing on local links.

So in 2020 while the Champions and LPGA tours were paused, notable pros such as Paducah’s Russ Cochran, Metropolis’ John Riegger and Princeton’s Emma Talley joined the lineup for the 84th Irvin Cobb Golf Championships at Paxton Park.

This year, Cochran, Riegger and Talley won’t be among those playing the venerable course as the world (including the golfing one) settles more into a state of near normalcy. But in that, this weekend’s Irvin Cobb will settle in too, which according to Paxton Park Director of Golf and Operations Danny Mullen involves a wide open field with plenty of homegrown talent playing in a homegrown tournament.

“We’ve got the traditional field with all the good, young local amateurs and older competitive amateurs and a lot of good up-and-coming mini tour professionals, as well as a lot of good PGA professionals from clubs around this tri-state area that still play well and like to compete,” Mullen said. “There’s still a lot of names in there that haven’t won it who are certainly capable of winning it.

“It’s chocked full of amateurs that are competitive every year that could win this for the first time. It’s got past champions in it that can light a fire under it this weekend and win it again,” he added. “We’ve got a lot of good past champions and a lot of good young guys who would like to get their name on that board for past Irvin Cobb champions.”

To those names are the past five years’ amateur champions of South Fulton, Tennessee’s Justin Johns (2020), Aaron Ingalls of Jackson, Tennessee (2018-19), Chris Erwin of Clarksville, Tennessee (2017), and Chase Landrum of Glasgow (2016).

Meyer, a former University of Kentucky golfer, claimed his 2020 title with a 6-under 65 for his opening round and came back Sunday with a 5-under 66 for a 131 total and three strokes ahead of runner-up Tim O’Neal, who is also in this year’s field.

Johns, meanwhile, had to endure a two-hole playoff after he, Christian Tooley of Bowling Green, and Paducah’s Avery Edwards were knotted at 139 after their two rounds last year, but emerged victorious on the par 3 No. 17.

While the golfers may provide a more traditional field for the Irvin Cobb, Mother Nature is providing something different for the course with recent bouts of wet weather. Mullen said the typical hotter and dryer conditions correlate to firmer, faster greens.

“Mother Nature is not cooperating and doing her part,” Mullen said. “However on other hand, (the course) is beautiful and lush and green and probably playing a little softer than it usually does because of the consistent rains we keep getting. That’s OK. It’s just a little different than what it normally is.

“What concerns us more is if we’re going to get any on the weekend and interrupt play. We’re hoping we can get through the weekend like Rolling Hills did last weekend and not have any significant weather interruptions so we can have a good event.”

The National Weather Service forecast has listed a 70% chance of precipitation for today (Friday) and Saturday, and then a 60% chance on Sunday.

Nevertheless, Paxton Park and its par-71 course covering 6,582 yards from the tips tests golfers even on the best days with tough par 3s, tight greens and some 2,000 trees, by Mullen’s count, which golfers have to navigate, as well.

As for challenging holes, he offered up drivable par 4s in the 285-yard No. 3 and 315-yard No. 12 that are slender with trouble on either side of the fairway. Coming down the stretch, Mullen added holes 15 and 18 — 494 yards and 544 yards, respectively — that he said are again not too long as par 5s but are ones golfers again can’t afford to venture too far wide on either side.

“One of the keys to Paxton is knowing how to approach the pins. The greens are not very big and if get underneath the cup you can be a little more aggressive with it,” Mullen said. “Even though they may not be as fast as we’d like them to be, over the weekend — and that kind of remains to be seen depending on the weather — you can’t be too aggressive from above the hole. So you’re better off trying to approach that pin from a more aggressive position and generally that’s below the hole.

“A little local knowledge here kind of goes a long way on the greens.”

The annual best ball pro-am is slated to tee off at 8:37 this morning with three amateurs paired with a professional. Mullen said it provides a bit of fun outside the regular tournament and also allows golfers a chance to play the course and be with buddies who may or may not be in the tournament.

The 85th Annual Irvin Cobb Championships is presented by Banterra Bank and Jim Smith Contracting. Mullen said they and all the event’s sponsors and volunteers make this tournament what it is — another place for the Paducah and McCracken County communities to hang their hat.