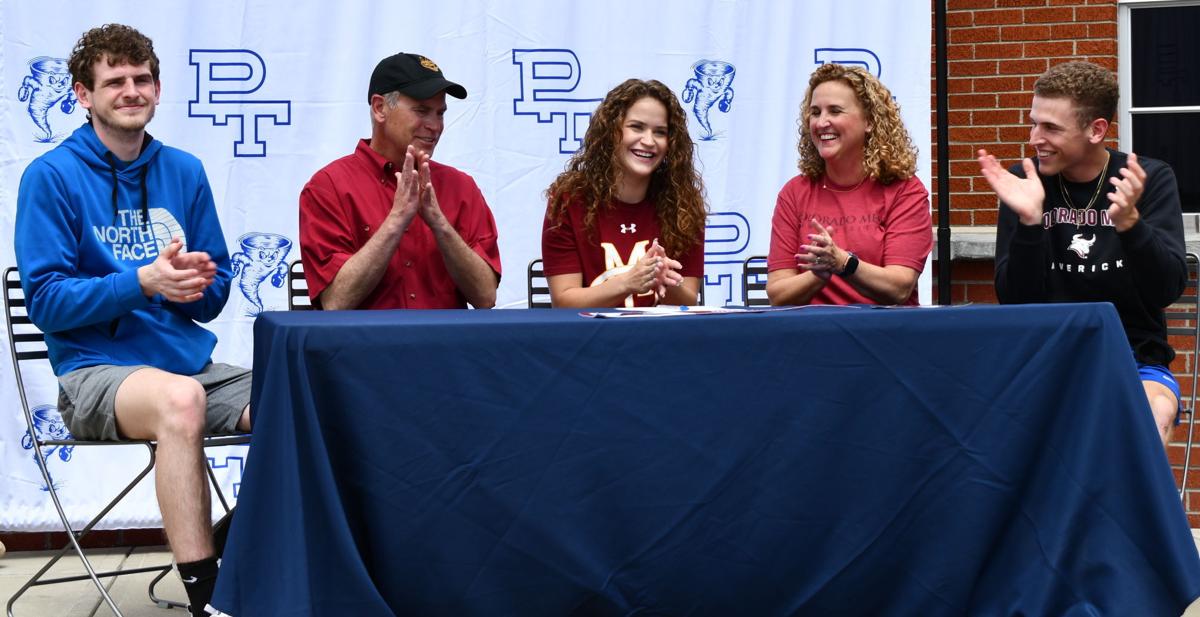 Paducah Tilghman senior McCall Hutcheson (center) smiles with her family after signing to continue her swimming career at Colorado Mesa University during a ceremony on Tuesday. Also pictured are her brothers, Jack and Grant Hutcheson, and parents, David and Crystal Hutcheson.

Paducah Tilghman senior McCall Hutcheson (center) smiles with her family after signing to continue her swimming career at Colorado Mesa University during a ceremony on Tuesday. Also pictured are her brothers, Jack and Grant Hutcheson, and parents, David and Crystal Hutcheson.

Many high school seniors opt to stay close to home when making their choice of where to attend college. Not McCall Hutcheson. The Paducah Tilghman senior is headed off more than 1,200 miles away to continue her academic and swimming career at Colorado Mesa University.

“It makes me a little nervous. It’s 18 hours away, so I think about, ‘What I am going to do if I miss my parents?’ I guess I’ll just have to FaceTime or something,” Hutcheson said. “I’m going to be starting a whole new life out there, so it’s going to be quite the ride. But I’m excited for it.”

Hutcheson spoke with The Sun during a signing ceremony in the Paducah Tilghman High School courtyard on Tuesday. She said signing the letter of intent was the culmination of a longtime dream.

“Today is very, very important to me. Ever since I was 8 years old, I decided I wanted to be a collegiate athlete, and I kept with it for so long,” she said. “I’ve definitely had my ups and downs, but I stuck with it, and today shows me how strong I am and how amazing my family is and how much support I have behind me and how much hard work I’ve put in.”

First-year PTHS swimming head coach Jordan Wessels, who was present for the signing, said he was proud to see Hutcheson achieve her dream.

“It’s always an accomplishment to have one of your athletes sign and be able to go to college for that sport,” he said. “That’s one of the main goals for a coach is helping your athletes pave the way for their future.”

Hutcheson, a distance swimmer, had lots of options as to where she would spend her next four years. In addition to CMU, an NCAA Division II school, she was also considering the likes of the University of Northern Iowa, Bellarmine University, Siena College and the University of Evansville. And she gave some thought to attending the University of Louisville for academics only. But that was short-lived.

“That’s just not something I could settle with,” Hutcheson said of possibly giving up her swimming career.

Hutcheson was introduced to CMU through a friend who used to live in that area, and she discovered the prestige of the school’s swimming program. A visit to campus sold her.

“Their distance program especially suited what I was looking for, and I fell in love with the place,” she said.

Located in Grand Junction — less than an hour from the Utah border in western Colorado — CMU boasts “one of the premier aquatic facilities in the western United States” in the El Pomar Natatorium, according to its website. The facility features over 800,000 gallons of water, four diving boards, hundreds of configurations and a state-of-the-art timing system, among other amenities, and Hutcheson was also impressed with the swimming team’s coaching staff.

“The coaches are amazing,” she said. “They are really supportive, but at the same time, they push you and are kind of hard on you. I’ve always worked well under coaching like that.”

“I’ve gone through several coaching changes, but I’ve blossomed because I’ve been more open-minded, and I’ve put in more work and have realized my potential,” Hutcheson said of her development as a swimmer. “So each practice I’ve had a better mindset going into it with focusing on what I can fix — one thing at a time. Ever since I’ve been doing that, I’ve been putting up faster times, and I’ve not been getting so upset at the failures and instead look at them as a learning process. So I’ve matured as far as how I approach swimming as a whole.”

Improving as a swimmer has also come with a lot of hard work and dedication.

“Whenever you get to a certain level, you start waking up every morning at 5 a.m. to jump in a freezing cold pool because the heater breaks sometimes. And you put in some of the hardest work you’ve ever done in your life — your lungs burn and your muscles burn, and you’re just completely fatigued,” Hutcheson said. “I can remember days when I would come home and I would just collapse on the floor because I was so tired. But then you have to get up and do it all again at night, and you start over again the next day. It’s a lot of perseverance and time management.”

Though he’s been with the PTHS swim team for just a short time, Wessels has been impressed with Hutcheson’s drive to succeed.

“She’s a hard worker and is very competitive,” he said.

As a distance swimmer, Hutcheson will be competing in the 500-yard freestyle, 1,000-yard freestyle and 1,650-yard freestyle events at CMU while perhaps also adding in some individual medley and backstroke races. She admits to being scared of distance swimming when she was younger, but she was drawn into it after discovering she had a natural talent for it. Now, she can’t see herself specializing in any other events.

“I don’t really like sprinting because I don’t get into the groove. But with distance swimming, I get to focus,” she said. “If I’m done with a race and my lungs aren’t burning, I don’t feel accomplished. I love the hard work and push of it all. I love pushing myself to my breaking point.”

Hutcheson will also be challenging herself academically at CMU, where she intends to major in cellular, molecular and developmental biology with minors in chemistry and business with an eye toward a veterinary career.

“I’m hoping after vet school that I can open up my own business and do my own vet programs,” she said. “But I have to get through undergrad first. A lot of work will go into that major.”

Wessels has high hopes for Hutcheson at CMU.

“I hope she’ll be able to adjust straight into it and hit the ground running and take off and have another good four years of swimming as well as pursuing her academic goals,” he said. “She’s going to be the dictator of how good she wants to be. She’s got the drive and the potential, and if she’s willing to continue putting forth the effort that she has so far, I don’t see why she can’t go wherever she wants to go.”