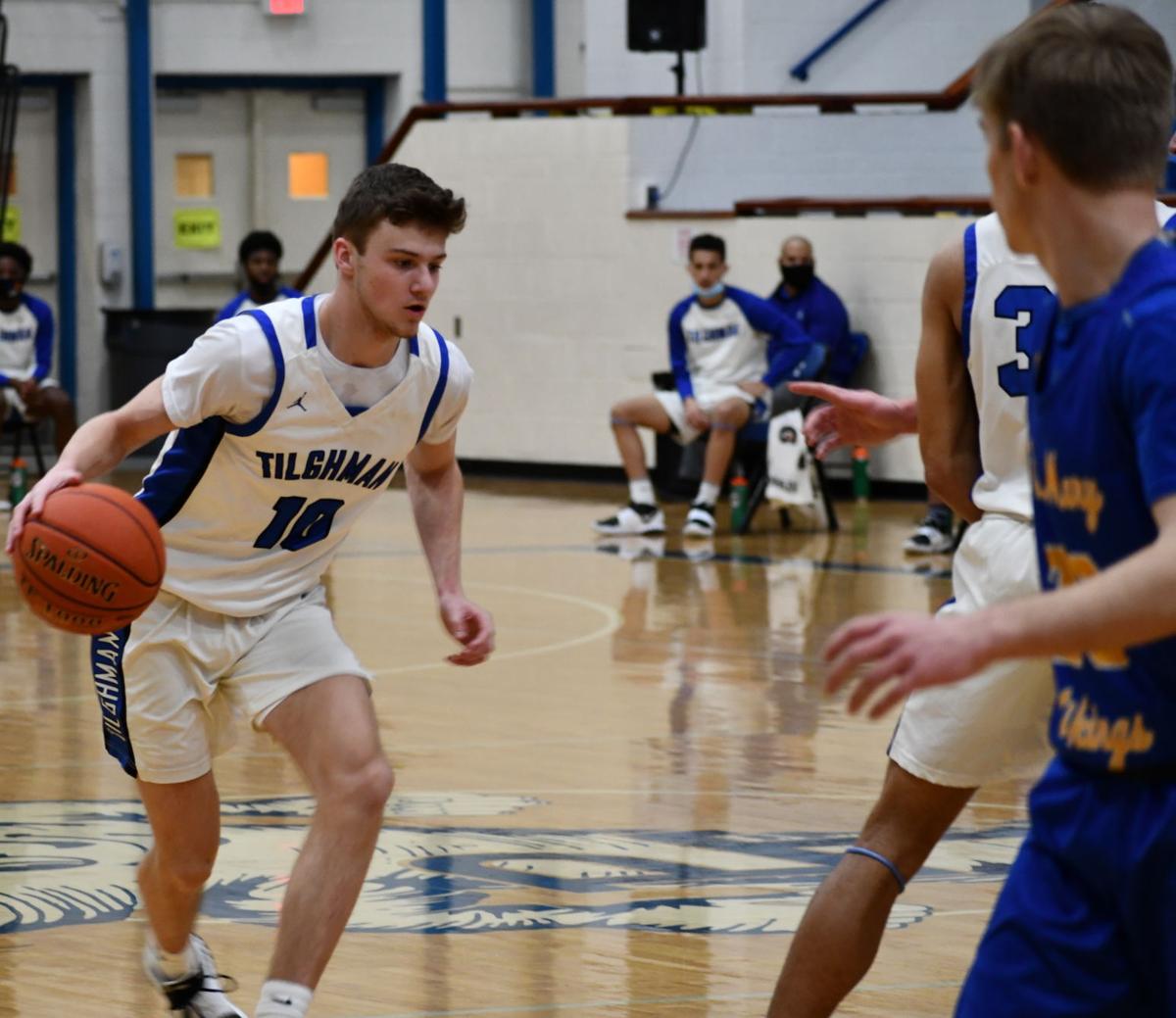 Paducah Tilghman senior Eli Brown looks to drive during a game against St. Mary this past season. Brown on Wednesday committed to continuing his academic and athletic career at Olney Central College in Illinois. 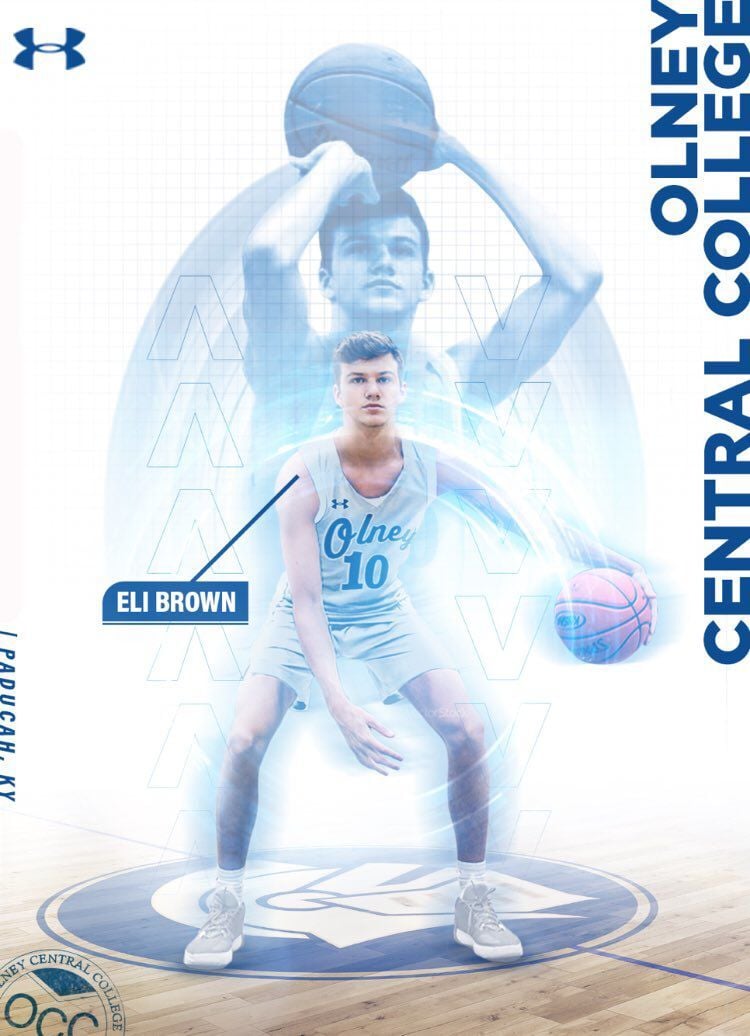 Paducah Tilghman senior Eli Brown looks to drive during a game against St. Mary this past season. Brown on Wednesday committed to continuing his academic and athletic career at Olney Central College in Illinois.

Brown announced his college choice on Wednesday, posting to Twitter that he has committed to Olney Central College. OCC is a public community college located in Olney, Illinois, in the southeastern part of the state approximately 140 miles northeast of Paducah.

“First I’d like to thank God for giving me the ability to play the game I love,” Brown said in a statement posted to his Twitter feed on Wednesday. “Next I’d like to thank all the coaches I’ve had during this journey for making me better on and off the court. Lastly, I’d like to thank my family for their love and support throughout this difficult process.

“COVID brought many challenges in the past year, but I’d like to thank all of the coaches who recruited and believed in me. This decision was not easy, but I feel it is the best decision for my future. With that being said, I’m proud to announce that I will be committing to Olney Central College!!! Thank you to Coach Wyllie and staff for the opportunity. I’m ready to be a Blue Knight and get to work.”

In speaking with The Sun by phone Thursday afternoon, Brown said he started building a relationship with Wyllie last summer during the AAU season.

“He came to a few tournaments, and we talked on the phone on a weekly basis. We talked throughout the high school season, and he came to a practice, and I went up there (to campus) to visit,” Brown said. “He was really loyal and kept it real with me from the start, and it all just felt right.”

Brown visited the OCC campus a few months ago to attend one of the Blue Knights’ games and came away impressed with the environment and the team.

“It’s a junior college, so it’s a small campus, and everything is right there. It just seemed like a perfect place for me to go there and get better for one or two years,” he said. “The team is graduating a few guys, and I feel like I’ll have a good opportunity to play and fit in with the group that they have coming back.”

Brown said Wyllie, who was recently promoted from interim coach, utilizes a familiar playing style — one that saw the Knights average 76.9 points per game this past season.

“His playing style fits the way I’m used to playing here at Tilghman,” he said. “They like to play fast and get up a lot of shots and press a little bit.”

With the 6-foot-3 Brown scoring a team-leading 16.8 points per game this season, the Blue Tornado averaged 66 points per contest en route to finishing with a record of 18-6. Brown also averaged 4.2 rebounds per game while showcasing himself as a top-flight shooter, making 51% of all his shots from the floor, 46% of his 3-pointers and 72% of his free throws. He finished with 67 made 3-pointers on the season and was voted as a member of The Sun’s All-Purchase Team.

Brown has come a long way in high school basketball at Tilghman. After playing in just one game as a freshman, he made 25 appearances as a sophomore, averaging 4.6 points per game and making 28 3-pointers. He really took off as a junior, averaging 14 points and 4.5 rebounds per game while making 63 triples on 39% shooting from beyond the arc as the Tornado went 21-12. But the COVID-19 pandemic severely altered recruiting.

“In my 16U summer, I was playing in front of coaches almost every weekend. Last summer, I didn’t play in front of a single coach all summer,” Brown said. “I think if it had been a normal year, I probably would’ve had the same amount of offers and probably even a good amount more going into the high school season rather than getting them at the end of the high school season. We just had to adapt to it and make the best out of it, which is what I’m doing, and I still think I’ll get to the level that I could’ve gotten to if it (the pandemic) hadn’t happened.”

Brown, who also received interest from Bethel University and a few Division II schools, has dreams of playing at the Division I level. He believes playing at Olney is a great first step toward realizing that goal.

“If I go there and improve my body and continue to get better, I’ll have a better shot of playing at a higher level than if I had gone (D-I) straight from high school,” he said.

Playing collegiate basketball has been a longtime dream for Brown, who has been involved in the sport for nearly his entire life.

“I started playing as soon as I could walk and have the ability to dribble,” he said. “My dad has been a coach all my life, so I grew up in the gym.”

He started taking the sport more seriously in middle school and took his dedication to an even higher level throughout high school as a spot on a college roster became an ever-increasing possibility. All that hard work has paid off, and he expects to see a significant amount of playing time as a freshman at Olney.

“He (Wyllie) told me that if I get in there and work, I’ll have a good opportunity throughout the season to get a lot minutes and show what I can do,” he said. “They have a really good point guard there, and they have some good wings, so shooting will be my main role. But I’m going to do whatever the team needs me to do to win.”

In the classroom, Brown, who boasts a 3.78 grade-point average and a 26 ACT score, plans to major in business as he continues to pursue his ultimate goal of playing college basketball at the Division I level. Based on his strong academics, his stay at OCC may be shorter than the customary two years. He’s keeping his options open at this point.

“I’m not sure I’ll be there the full two years yet because with my academics right now, I don’t necessarily need the two. I’ll play out next year, and if I feel like I find the right place and they want me for the next year, I can go ahead and leave. But if I need the second year, I can come back too,” Brown said. “Obviously, Division I is the dream, but I’m not set on that it has to be D-I. I’d go to a good D-II program, but I feel like if I play to my potential, I can get to the D-I stage.”