The Paducah Tilghman baseball team gathers with its trophy after winning the Kentucky 2A state championship on Sunday in Owensboro. 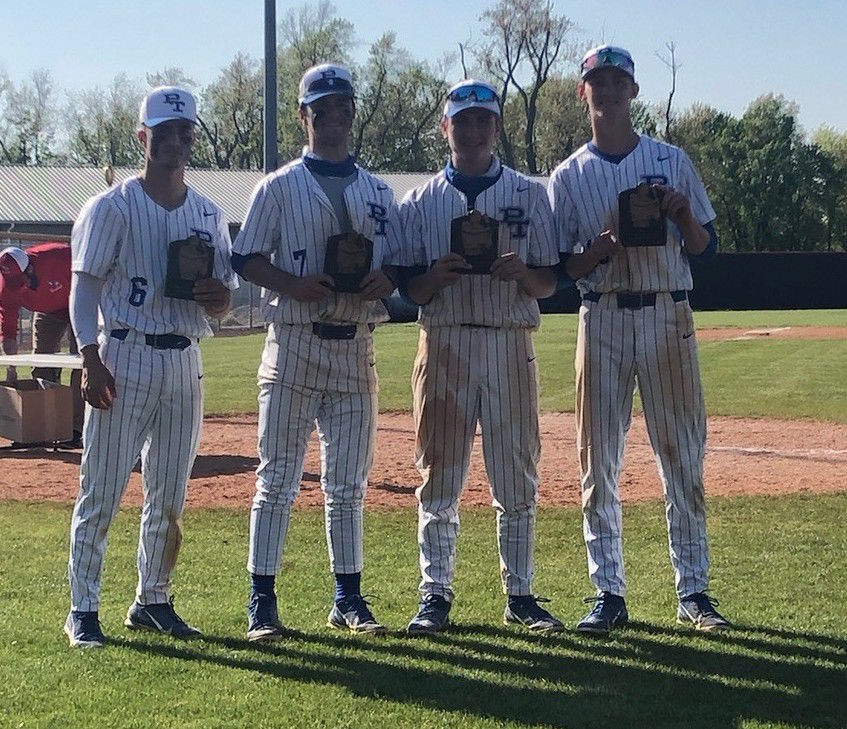 The Paducah Tilghman baseball team gathers with its trophy after winning the Kentucky 2A state championship on Sunday in Owensboro.

In his first official season leading the Paducah Tilghman baseball team, head coach Tremayne Donald already has a state championship to his name.

As part of their unbeaten start to the 2021 season, the Blue Tornado (15-0) ran through their three-game slate at the Kentucky 2A Championships to claim the state title over the weekend. They started with an 8-6 quarterfinal win over Lexington Catholic on Friday and followed that with a 10-0 victory over Taylor County on Saturday to advance to Sunday’s championship game against Christian Academy of Louisville. Facing adversity in the form of a 6-3 deficit in the sixth inning, Tilghman stormed back for a 10-7 victory over the Centurions for the state title.

“For the kids and the team, it means a lot that we represented our school the way we did and that we were able to bring a championship home to our school,” Donald told The Sun on Monday morning. “Baseball is the sport that we play, but the championship is for the whole Paducah Tilghman High School.”

For Donald, a Paducah Tilghman alum, the victory was of special significance.

“In my junior and senior years, I was able to play in two state tournaments. Now to coach in one and win one for Paducah Tilghman is extra special for me,” he said.

Donald said emotions ran high throughout the entire tournament, which he described as intense. He added that each of the Tornado’s opponents were “real solid teams,” meaning the margin for error was slim.

Tilghman was able to scrape past Lexington Catholic before blowing out a previously unbeaten Taylor County team.

“I told the kids that the first one was the biggest one to get out of the way. We did some things that were uncharacteristic of us and made that game tougher than what it was, but Lexington Catholic is a good baseball team,” Donald said. “Taylor County is a solid team as well, but we just got after them.”

That led them to Sunday’s matchup with CAL, which Donald described as an “unbelievable game.” Tilghman led 3-2 after five innings, but the Centurions scored four runs in the top of the sixth to take a 6-3 edge. Donald didn’t panic, though.

“I thought if the kids saw me bothered and uptight and panicking with my head down that they would put their heads down,” he said. “So I gathered them all together and said, ‘Look, we’re down three runs. We’ve been in situations like this before, but we haven’t been behind. Now we’re going to find out what we’re made of. We’re the home team, and we have two innings to get four runs. That’s not hard to do for us. This is a time when we can’t have selfish at-bats. If you want to win a championship, we have to have baserunners no matter what it takes.’ ”

That meeting led to an offensive explosion in the bottom of the sixth. Freshman Jaylen Seay had an RBI single, two runs scored via a CAL error, and senior Jack Hutcheson added a sacrifice fly to give Tilghman a 7-6 lead. Junior Gage Griggs added an RBI double, and junior Justin West followed with an RBI single to increase the lead to 9-6. The Tornado scored their final run on a double steal with West coming home and senior Zion LaGrone swiping second.

“There’s usually a couple innings where we have our way with people, and we had our way with them in that inning and put that game away,” Donald said.

CAL added a run in the seventh but would score no more against LaGrone, who was pitching in relief of West and sophomore Levin East.

West, who got the pitching start and threw 120 pitches over 5 1/3 innings, gave up six runs (three earned) on nine hits and three walks while striking out 13 en route to being named the tournament MVP. He was also a force offensively, as he tallied seven singles and six RBIs over the course of the Tornado’s three games.

“Justin was on fire,” Donald said. “He swung the bat well the whole weekend and played really well, and he did what he does on the pitcher’s mound. He was more than deserving of the MVP of the weekend.”

With a state championship on the line, Donald said there was no way he was turning to anyone but West to pitch against CAL despite it making him unavailable to start Tuesday’s game against McCracken County.

“Throughout our first 15 games, all those guys have been swinging the bat consistently, so I’m not surprised that those were the guys that were chosen for the All-Tournament team,” Donald said. “Levin had a great weekend at the plate and on the bases and pitched well and played good defense. I had a PBR (Prep Baseball Report) guy come up to me after the Saturday game, and he interviewed Gage and was talking to me about him. He said, ‘I really think he’s the best defensive shortstop in the state.’ I said, ‘There’s no doubt about it.’ He’s a college player, and I think he’s a Division I player. And Gunner came up big for us on the pitcher’s mound and swung the bat well.”

Fresh off their championship, the Tornado enter this week ranked No. 2 in the KHSAA RPI standings. But Donald still believes his team is somewhat overlooked.

“I don’t think we get the respect that our kids deserve, but we’ll get our credit eventually as long as we keep doing what we do and keep playing the way that we play,” he said.

Next up is Tuesday’s home game against McCracken County — No. 24 in the RPI — at Brooks Stadium on Tuesday at 6:30 p.m. Donald described it as a highly anticipated matchup, and he’s hoping his team can refocus following the excitement of the state championship.

“Hopefully we’re mentally tough enough that we can put the state championship behind us and look forward and get back on track, because we still have work to do,” he said. “We’ll see if the blue boys can rise to the occasion, and I think we will.”