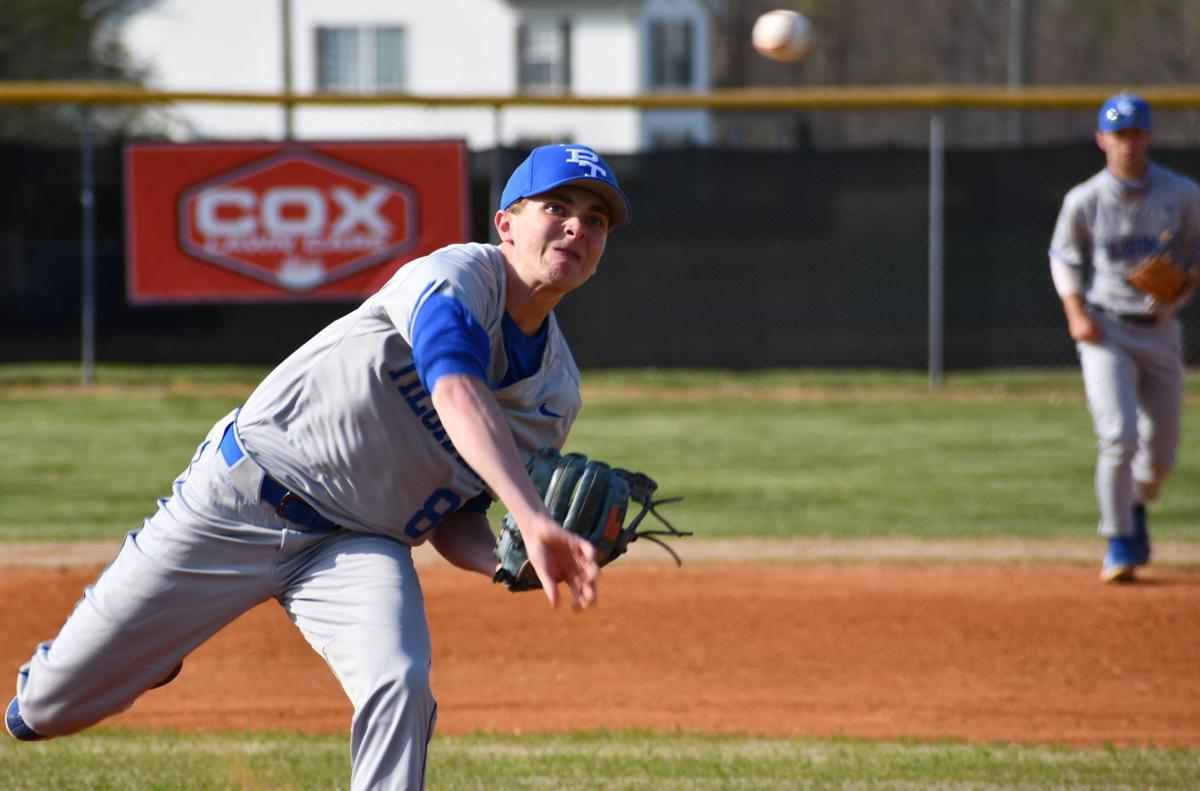 Paducah Tilghman sophomore Burke Waggoner throws a pitch in the bottom of the first inning of Tuesday’s game at Ballard Memorial. Waggoner allowed no hits and no walks while striking out six in the Blue Tornado’s 11-0 win. 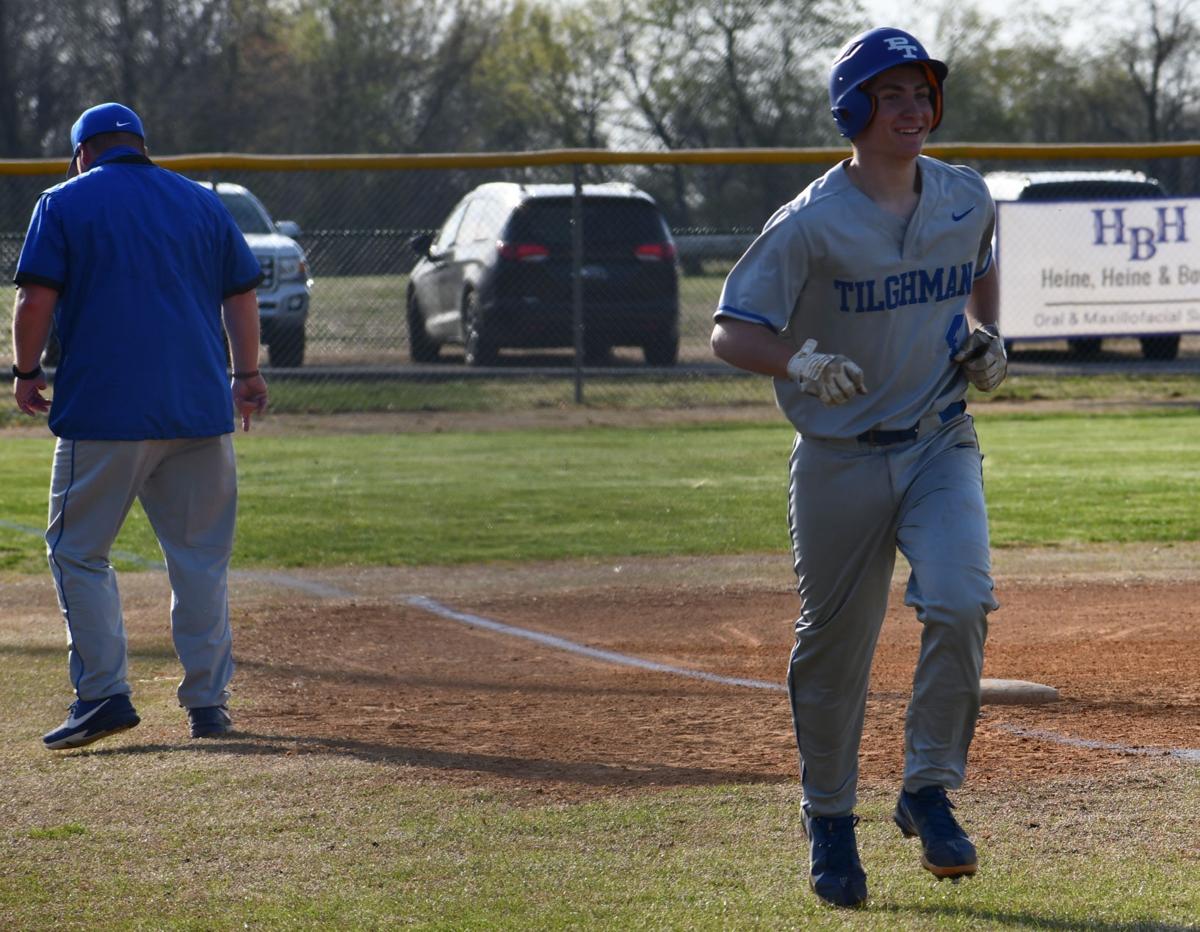 Paducah Tilghman sophomore Gunner Massey smiles as he trots down the third-base line after hitting a two-run homer in the fourth inning of Tuesday’s game at Ballard Memorial.

Paducah Tilghman sophomore Burke Waggoner throws a pitch in the bottom of the first inning of Tuesday’s game at Ballard Memorial. Waggoner allowed no hits and no walks while striking out six in the Blue Tornado’s 11-0 win.

Paducah Tilghman sophomore Gunner Massey smiles as he trots down the third-base line after hitting a two-run homer in the fourth inning of Tuesday’s game at Ballard Memorial.

LA CENTER — For a complete, all-around performance, Paducah Tilghman head baseball coach Tremayne Donald couldn’t have asked for much better out of his team late Tuesday afternoon at Ballard Memorial.

Sophomore Burke Waggoner pitched a no-hitter, and the Blue Tornado offense tallied 13 hits in an 11-0 win in five innings.

Less than 24 hours after the Tornado (6-0) struggled to get much going offensively in a 3-1 win over Carlisle County, the bats awoke to the tune of seven extra-base hits — three doubles, two triples and two home runs — against Ballard Memorial pitchers Konnor Myatt and Keaton Overstreet on Tuesday.

“We were in a tight, emotional game last night, and I still don’t know how we had eight hits and three runs. But to come out today and not let that linger and have quality at-bats, we put runs on the board,” Donald said. “I was really pleased with the way we came out aggressively swinging the bats today.”

Waggoner, who did not hit in the game, said Donald always preaches the importance of having quality at-bats. Those quality at-bats paid off against the Bombers (0-4).

“We always talk about quality at-bats and to go up to the plate and fight and make something happen,” he said. “Coach always says that if we have quality at-bats, we’ll score runs and win games.”

While his teammates were giving him lots of run support, Waggoner was having plenty of success on the mound. He faced just two more batters than the minimum — Myatt reached on an error in the first inning, and Mason Nichols was hit by a pitch in the third — and struck out six as he cruised to the five-inning no-hitter.

“I know I have a great defense behind me, and I knew to just pound the zone and make them (Ballard) hit the ball because I knew our defense would make plays behind me,” Waggoner said of his mindset on the mound. “We’re such a great team that I feel like I can be as comfortable as I have to be on the mound because my guys always have my back. So I just chill out and throw strikes.”

“I’m real proud of Burke for going out there and filling up the zone,” he said. “He got a lot of ground balls, and we caught the ball and played good defense behind him. I couldn’t ask for anything more.”

Waggoner was able to ease into the game after the Tornado built a 2-0 lead in the top of the first inning courtesy of an RBI double from Justin West and an RBI sacrifice fly from Zion LaGrone.

After a scoreless second frame, Tilghman plated six runs in the third. Singles from Jack Hutcheson and Levin East put runners on for LaGrone, who hit a two-out, two-RBI double. Gunner Massey brought LaGrone home on a double and scored on a Bomber error that allowed Devin Kiebler to reach base. Leyton Patterson and Clay Chandler followed with back-to-back RBI triples to centerfield before Myatt got out of the inning with a strikeout of Hutcheson.

Leading 8-0, the Tornado scored their final runs via a pair of homers in the top of the fourth inning. East hit a solo home run over the left-centerfield fence, and Massey followed a two-out single from LaGrone with a two-run shot to centerfield.

Tilghman got solid offensive contributions from throughout its lineup on Tuesday. Patterson was 3-for-3 with a triple and two singles along with an RBI. Other top performers included Massey (home run, double, 3 RBIs), LaGrone (double, single, 3 RBIs), East (home run, single, RBI), Chandler (triple, single, RBI) and West (double, RBI).

“I love these guys to death. They play the game the right way and compete, and that’s all I can ask for as a coach,” Donald said. “We’re getting it done right now.”