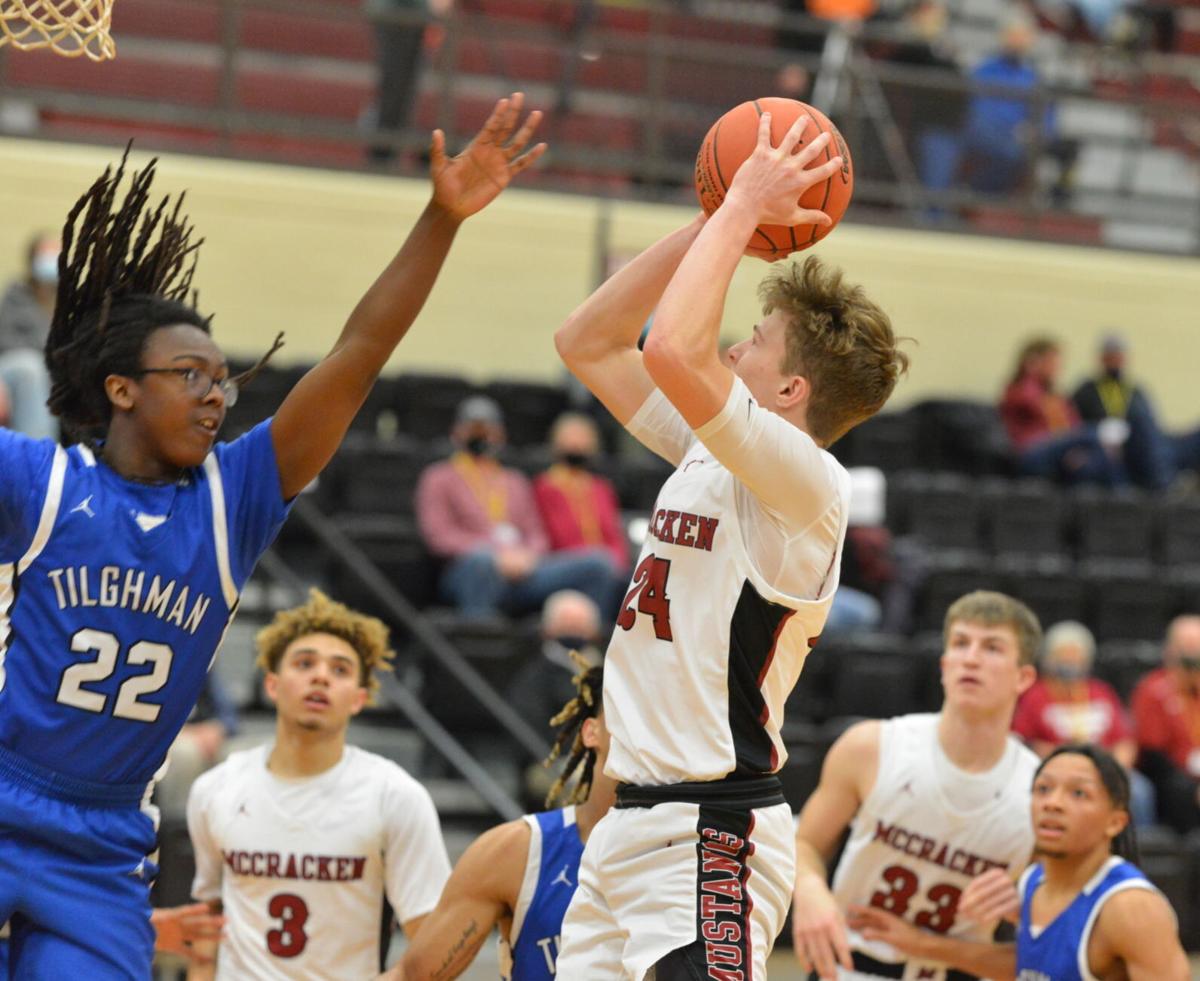 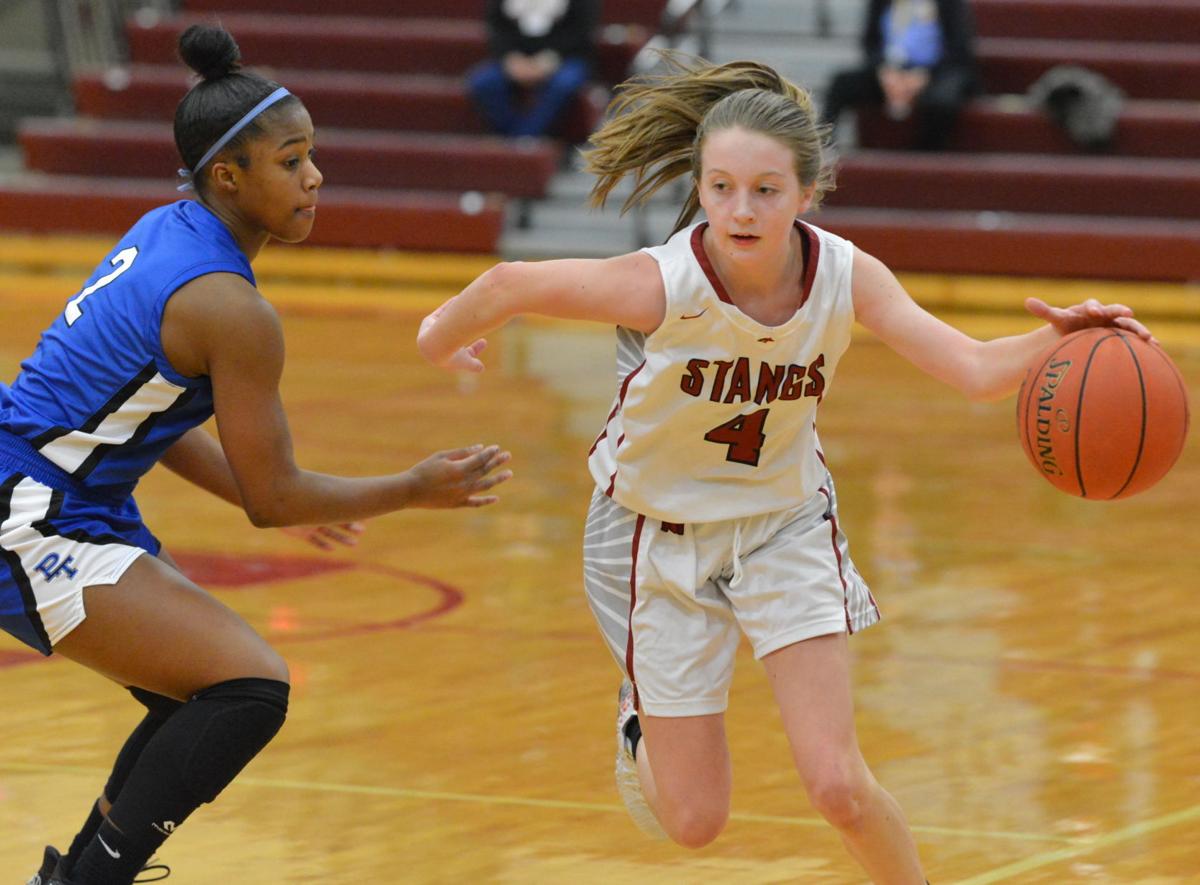 The McCracken County boys basketball team got off to a strong start Tuesday against visiting Paducah Tilghman, but it was the Mustangs’ finish over the final eight minutes that officially sealed the deal on a 74-56 victory.

Three-pointers from juniors Ian Hart and Max Blackwell and senior Noah Dumas helped the Mustangs (3-1) jump out to a 13-0 lead to open the game before the Blue Tornado (1-1) got on the board with a Troy Williams triple with 1:44 remaining in the period.

“We jumped out and really guarded like we were supposed to,” McCracken head coach Burlin Brower said.

However, Tilghman fought back to within three, 28-25, at halftime en route to taking a 45-44 lead into the fourth quarter. That’s when the Mustangs exploded.

McCracken junior Brant Brower made a layup with 5:33 left in the game that was the start of a 13-0 run over the next three minutes that put the Mustangs up 66-52. That run was part of a 30-point fourth quarter that sealed the victory.

“Once they got up, we had to spread out and chase them. They threw it to the right person and made the extra passes and shot layups,” Blue Tornado head coach Greg Overstreet said. “At the end of the day, they were tougher than us. We have to be able to get more loose balls and rebounds. We just didn’t get the job done.”

Coach Brower was proud of how his team took better care of the ball down the stretch and praised the play of his bench as well as that of Dumas, who finished with a team-high 18 points in addition to providing stellar defensive play.

“Noah Dumas did a great job defending Eli Brown,” he said. “I think Noah takes it personal when people say Eli is better than he is. And when Noah gets challenged, he can flat out guard.”

A layup from senior Landon Fitzgerald and a free throw from senior Brian Thomas had put Tilghman up 48-46 with 7:04 remaining, but McCracken’s Brower answered with a 3-pointer that ended up giving the Mustangs the lead for good.

Overstreet was pleased with the way his team held its composure to fight back from its early deficit but walked away disappointed in the overall outing.

“I want to leave every game thinking we played harder than the other team, and I don’t know that we did that tonight,” he said. “But I know we’ll get better.”

Fresh off his 400th career win, McCracken County girls basketball head coach Scott Sivills quickly got No. 401 at home on Tuesday against district rival Paducah Tilghman. And he had freshman Claire Johnson largely to thank for it.

“I thought Claire Johnson stepped up and made some big-time plays for us,” Sivills said. “When you have a point guard like her running the show, it helps out a lot. She sets the tone for us.”

Johnson made a trio of 3-pointers on the night and finished with 22 points in the Lady Mustangs’ 69-44 win.

“This was my best game of the season so far. I was pretty proud of it. I felt good,” the freshman said afterwards. “Before the game when I was warming up, I was getting excited to play, and I just went out there and played.”

Johnson’s performance on Tuesday showed how much she has improved over the past year.

Johnson credits last season for preparing her to play a major role as a freshman this year.

“Last year I got to play as an eighth-grader, and that helped me a lot,” she said. “It’s my time to shine this year. I get to start, and I’m really excited about it. And as the season goes on, I think I’m just going to keep getting better.”

Fellow freshman Mikee Buchanan finished second on the team in scoring with 14 points, while sophomore Caroline Sivills added 11 to go with six each from junior Shymiya Daye and freshman Grace Henderson and five from junior Haidyn Green.

“None of us were selfish. We all worked together throughout the whole game,” Johnson said. “We did what we needed to do, and we got the win.”

Caroline Sivills, the coach’s daughter, kickstarted a strong opening quarter for McCracken County with eight points in the period to send the Lady Mustangs into the second leading 20-6.

“She got some shots in her wheelhouse, and she made some really good plays to get us going offensively early,” Scott Sivills said of Caroline.

Tilghman senior Natalie Warren opened the second quarter with a 2-point shot, but McCracken answered with a 13-0 run to make the score 33-8 and essentially put the game out of reach.