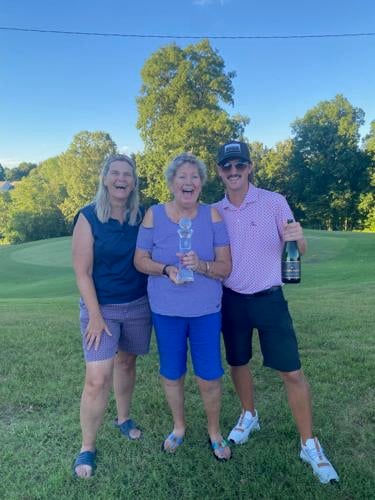 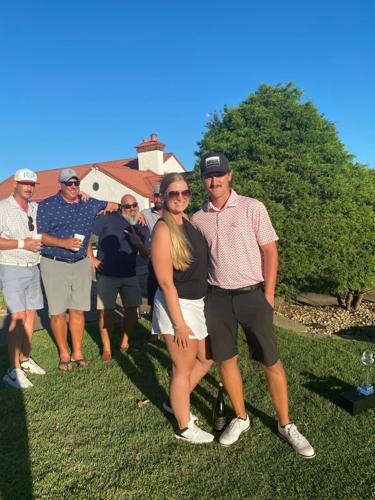 Drake Stepter is pictured with his girlfriend, Megan Bailey, after winning the Rolling Hills Invitational. Stepter is only the fourth competitor to win three back-to-back titles in the tournament.

Drake Stepter is pictured with his girlfriend, Megan Bailey, after winning the Rolling Hills Invitational. Stepter is only the fourth competitor to win three back-to-back titles in the tournament.

When Drake Stepter returned to Rolling Hills Country Club to defend his back-to-back championships at the Rollings Hill Invitational, he knew what he needed to do. Stepter became only the fourth champion to win three consecutive titles in the 66 years the tournament has existed.

“Rolling Hills has been my home for a long time,” Stepter said. “Everyone associated with this place is like a family, so being able to win for all of us and keep it in-house is a big deal for me.”

Stepter shot a 64 on Saturday and a 65 on Sunday, leading the pack from start to finish. He claimed the win by shooting a 15-under-par 129.

“The only added pressure was battling the expectations coming off last year, winning all three major events in west Kentucky and the Kentucky Mid-Am,” He said. “My goal was not to give anybody a reason to call last year a fluke and show this is the new standard — leave no doubt.”

The McCracken County and Georgetown graduate finished without a bogey on the weekend and birdied four of his first five holes on the second day of the Rolling Hills Invitational.

“Off to a good start with that,” Stepter said. “I’m going to put in a good week of practice this week and go for another Cobb title.”

Stepter will look to continue his winning streak during the 86th Annual Irvin Cobb Championships at Paxton Park this weekend. He earned his first Cobb title in 2021 after losing his father, Mike, days before the event. After winning the event, Stepter credited his father for guiding him to be the golfer he is as an adult.

Stepter finished 10 strokes ahead of runner-up and previous four-time champion Josh Rhodes, who shot a 139 (68-71). Dalton Bagwell finished third with a 143. In addition, there was a five-way tie for fourth between Ryan Demit, Andrew Watson, Brad Robbins, Will Cox, and Matt Scott with 144s.

Senior Champion Joe Johnson shot a two-day total of 141 (72-69), finishing eight strokes ahead of Greg Ford and Don Jordan, who tied for second with a score of 149.