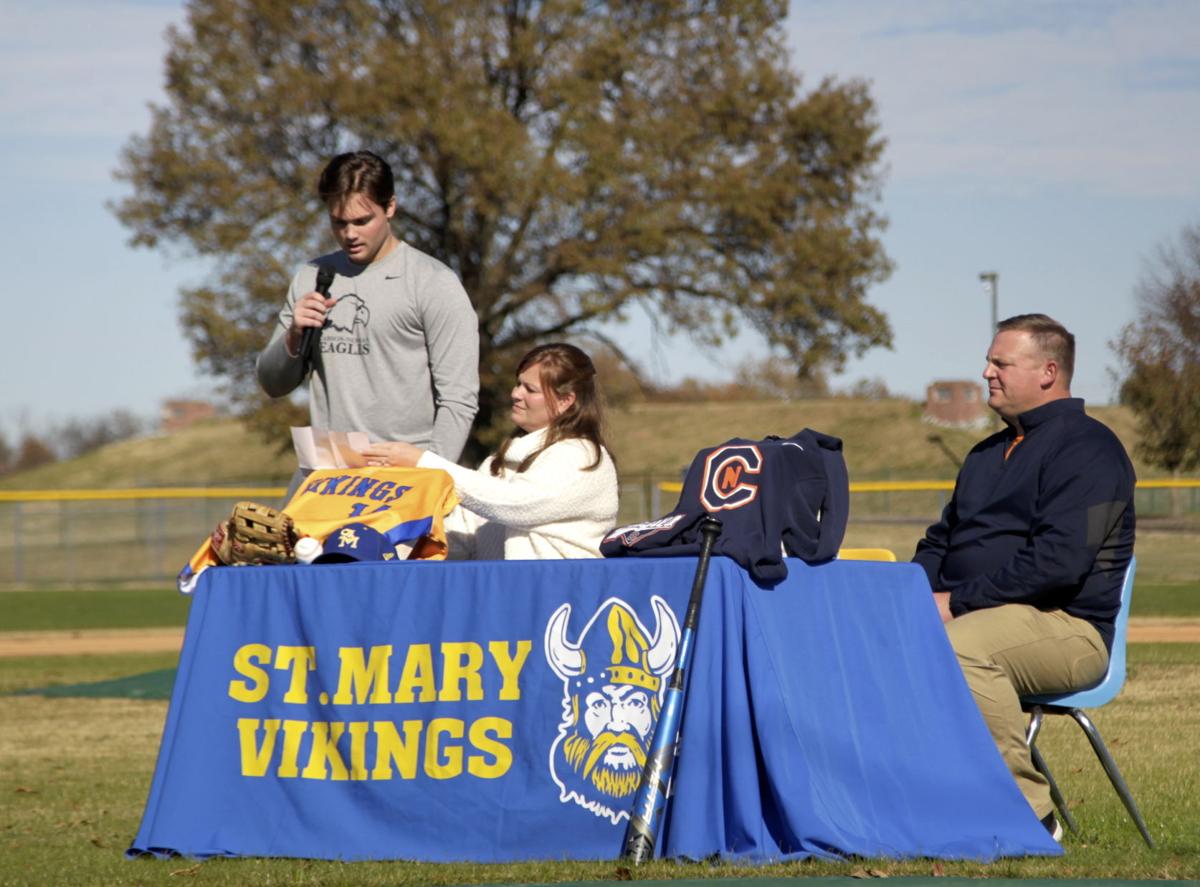 St. Mary’s Bryce Haas signed his national letter of intent on Friday at Vikings Field to join the Carson-Newman baseball team, one of seven across the nation to pick the Eagles in the Class of 2021. Haas had prepared a personal statement for the school and his parents, Beth and Chris (seated), and he’s ready to turn his attention to the rest of his senior year before bouncing to east Tennessee. 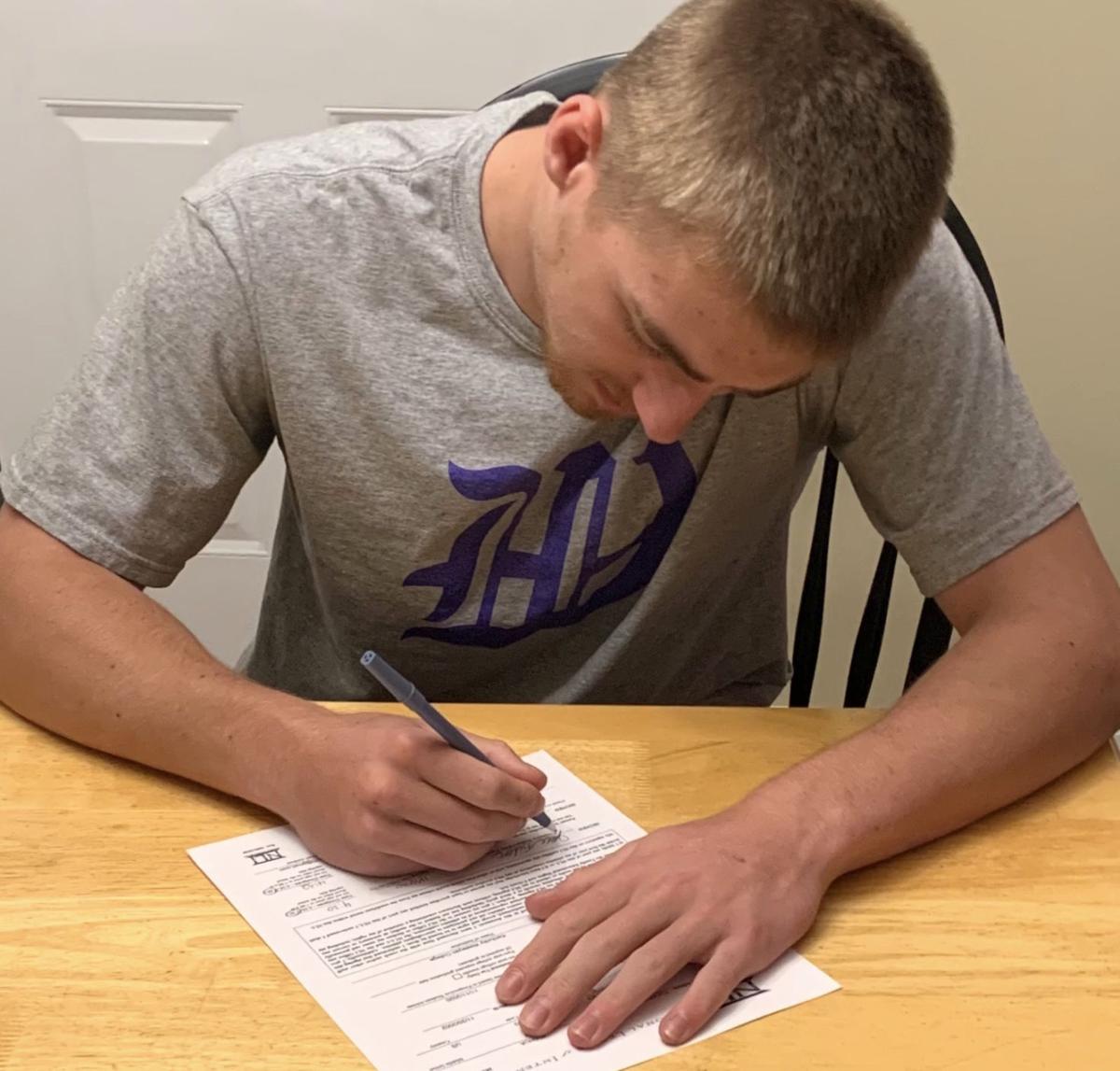 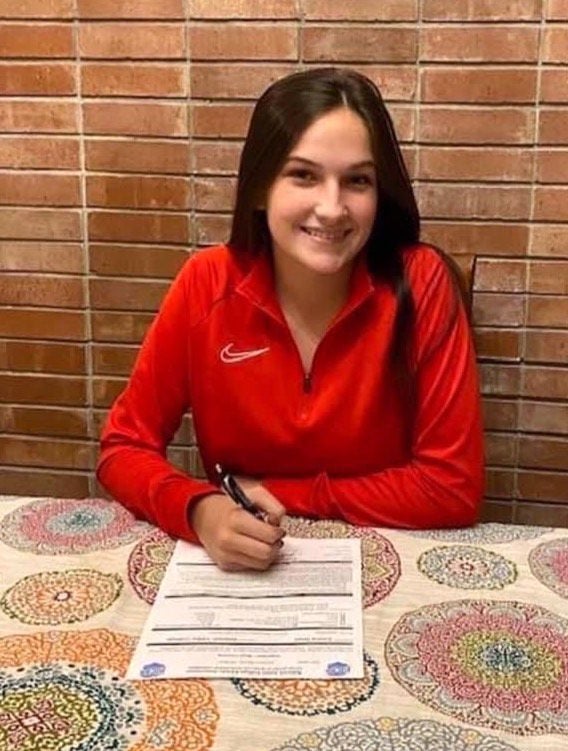 St. Mary’s Bryce Haas signed his national letter of intent on Friday at Vikings Field to join the Carson-Newman baseball team, one of seven across the nation to pick the Eagles in the Class of 2021. Haas had prepared a personal statement for the school and his parents, Beth and Chris (seated), and he’s ready to turn his attention to the rest of his senior year before bouncing to east Tennessee.

Signing a National Letter of Intent already comes with measured gravity — a weight lifted as an athlete inks with their college of choice.

Friday afternoon at St. Mary High School, senior corner infielder and pitcher Bryce Haas put his penmanship on paper while sitting in the heart of the Vikings’ diamond — a familiar, familial place full of home-grown hits and history.

“It was really neat to sign on the field that dad (Chris Haas) grew up playing on, and grandad (Louis) was his coach in high school…where they won, three out of four years, a regional championship,” he said. “It’s really cool to sign on the field my family grew up having a lot of wins on.”

In the backdrop, a large oak tree his pops used to aim for during afternoon batting practices, professional scouts watching and waiting in the stands.

Haas knows he’s not following the exact steps his father took in high school, when an offer from Ole Miss was almost enough to lure him from the thrill of minor league baseball.

But that’s okay. Carson-Newman baseball and the Eagles, under the direction of 16-year skipper Tom Griffin, was just the place for Haas and his future.

“From the moment I went down there, it immediately felt like home,” he added. “East Tennessee, it’s got a lot of similarity to west Kentucky. I can definitely see it being a ‘home-away-from-home.’ I feel comfortable down there. I feel like I can relate to the people down there. It’s got a really similar feel to Paducah.”

Basketball season will, of course, consume most of his time in the coming weeks, as the Vikings are set to begin on Nov. 23 with five seniors — including Haas — starting for second-year skipper Chase Denson.

Then, it’s back to baseball, and the ultimate focus of producing for the Vikings in 2021 before heading to Carson-Newman with hopes of contributing sooner, rather than later, for his new team.

“When I went down for my visit, I had a really good workout,” Haas said. “And coach Griffin said, ‘You’re going to come in, and the door is open for you. You’re going to make your own path here.’ He said I ‘absolutely had the ability to come in and make a difference, and could impact the team right away.’

“But it’s all in my hands. I can either take that and run with it, or I can let it get to my head and throw it away. The opportunity is there, and I plan to fully take advantage of it, and work hard.”

The 2020 spring sequester due to the coronavirus didn’t stop his next step, and over the last 3 1/2 seasons leading up to this senior year, he’s been a participant in the 2017 KHSAA state runner-up finish for McCracken County, as well as the Team Kentucky PBR Fall Midwest Championship in 2019, the Team Kentucky Southeastern Underclassman Shootout and the PBR Preseason All-State Showcase.

The Panthers, home in Owensboro, had won five straight games through March 7, 2020 and were 7-5 before a stoppage in play due to the pandemic.

A strong midfielder, Shell had one goal and two assists in 15 games this season, and is now set to join a Lady Warriors team that finished 2-10 in 2019 while averaging 1.08 goals per game on offense, and 4.00 goals allowed on defense.