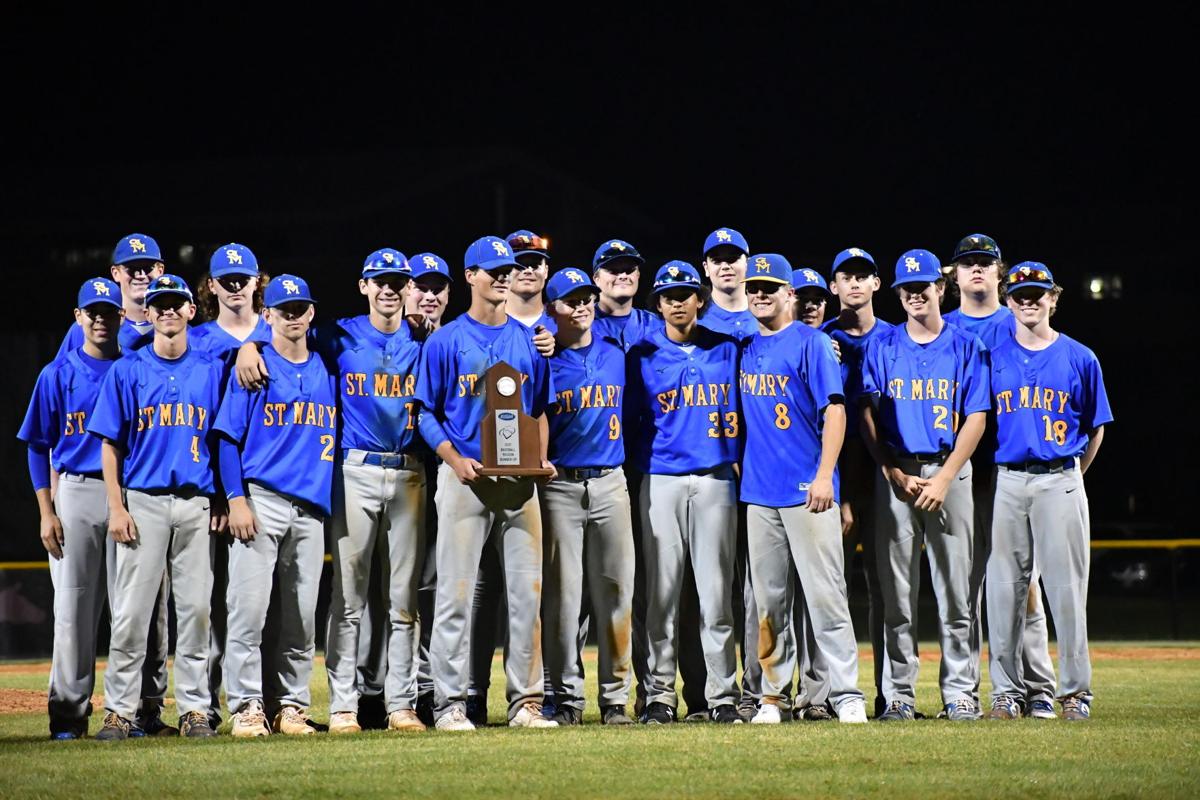 The St. Mary baseball team gathers with its First Region runner-up trophy after falling to McCracken County in the championship game on Monday night. This was the Vikings’ first regional tournament appearance since 2014. 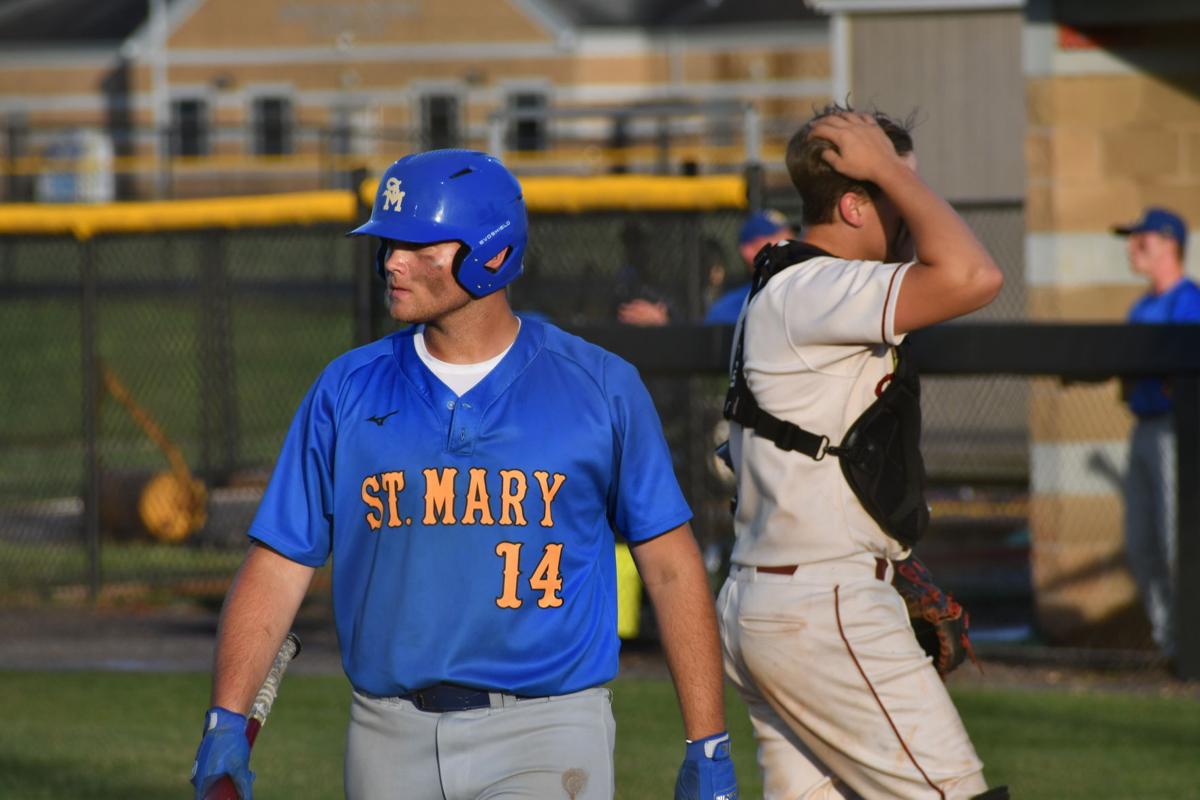 St. Mary’s Bryce Haas looks for the sign before stepping to the plate in the First Region championship game against McCracken County on Monday night. Haas will continue his career at Carson-Newman this fall. 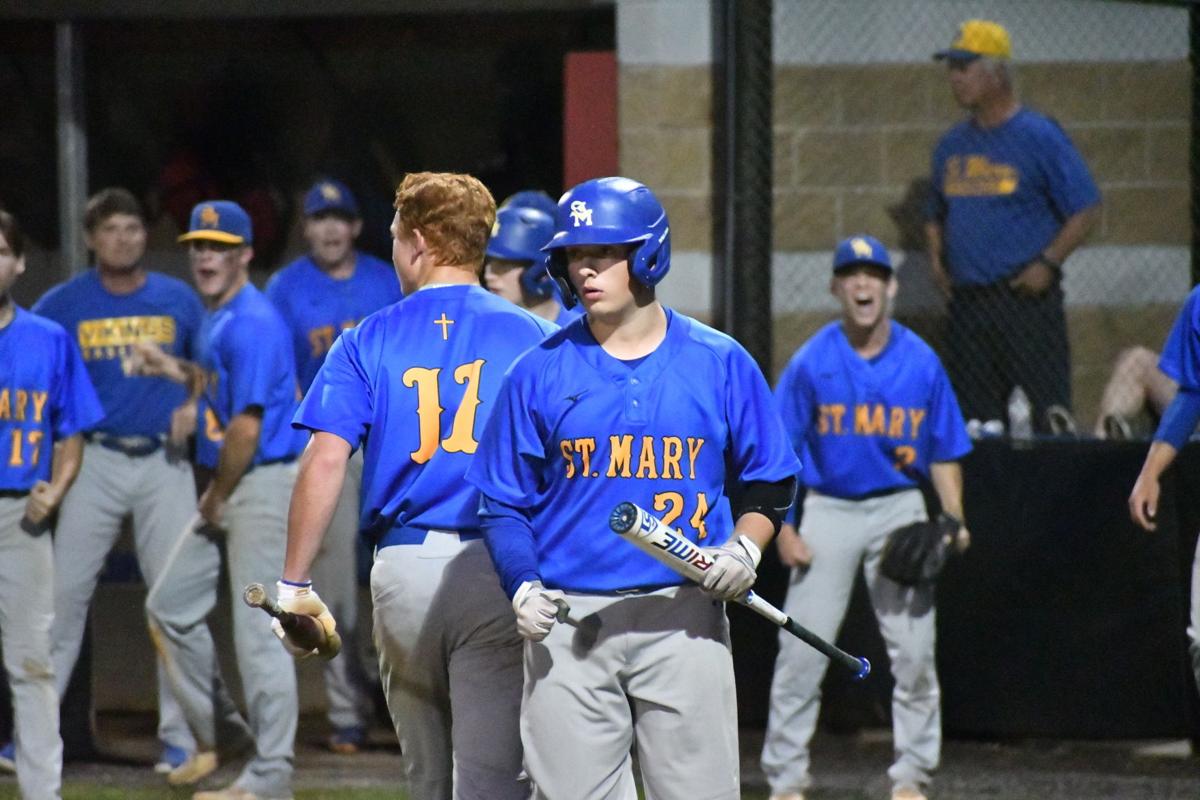 St. Mary players celebrate as they tie the score at 4-4 against McCracken County in the First Region championship game on Monday night as Landon Durbin steps up to the plate.

The St. Mary baseball team gathers with its First Region runner-up trophy after falling to McCracken County in the championship game on Monday night. This was the Vikings’ first regional tournament appearance since 2014.

St. Mary’s Bryce Haas looks for the sign before stepping to the plate in the First Region championship game against McCracken County on Monday night. Haas will continue his career at Carson-Newman this fall.

St. Mary players celebrate as they tie the score at 4-4 against McCracken County in the First Region championship game on Monday night as Landon Durbin steps up to the plate.

The St. Mary Vikings’ baseball season may have ended on Monday night, but the memories will last a lifetime.

For head coach Chris Haas, it was an emotional run to the finish line with a group of young men that had been under his guidance since the age of 4.

“The whole team is special to me because I’ve coached many kids through middle school and just one year before this in high school,” Haas told The Sun. “In particular, the seniors I’ve had since they were 4 years old, coaching them in T-ball and being able to coach them all the way through.”

It all started with a season-opening 5-4 win over Graves County on March 29. From then on, the Vikings knew this season would be different.

“These kids play a very good fundamental baseball game, and we performed extremely well on the field throughout the season,” Haas said. “It was seen as time got closer to the tournament and toward the end of the season.”

Going into the postseason, the Vikings knew what was needed to continue — beat Paducah Tilghman. The 6-2 win in the Second District semifinals would change everything and give the Vikings their first regional appearance in seven years.

In regional play, St. Mary defeated Graves County for the third time during the season with a 7-5 victory last Saturday.

“They brought their best and were playing their best at the right time,” Haas said. “These kids showed a lot of determination and heart, and it’s something that I hope that they will never forget.”

While the season ended Monday on Edward Jones Field with a 9-4 loss against McCracken County in the First Region championship, it opened eyes in the region that St. Mary has what it takes to compete with the big dogs.

“You know McCracken County is a great, great team with tremendous talent from top to bottom in that lineup. They’re well-coached by Coach Hobbs,” Haas said. “For our kids to go out and play that kind of game and be competitive, it was a 4-4 game there at one point. But just like any other game, it’s the mistakes that cost you, and we had a bad inning that was certainly our demise.”

During the First Region championship, the Vikings surprised spectators when they tied it up at 4-4 in the fourth inning on a Bryce Haas RBI single to right field.

“I credit our kids playing with a lot of heart and determination,” Haas said. “Take Michael Lurtz, he may not be very big, but he sure packs a punch. Lurtz did a tremendous job down the stretch for us.”

With Lurtz on the mound in critical games, the recent graduate was an essential piece of the Viking puzzle. He ended with a 2.12 ERA and 31 strikeouts in 43 innings.

“Overall, this was a great year for us. Even after some tough stretches during the season, the team kept working hard and continued to believe in each other,” Lurtz said. “We were lucky to have an amazing coaching staff that helped us succeed on and off the field. I loved playing with this group of guys.”

In addition to his magic on the mound, Lurtz led his team with 10 stolen bases.

“We’ve been playing baseball together for a long time,” Lurtz said. “Being able to compete for a regional championship was a great way to finish up our time playing with each other.”

Offensively, Lurtz collected 23 hits in 83 at-bats, with one home run and 11 RBIs.

The coach’s son, Bryce Haas, led his team with 23 RBIs, collecting 25 hits in 66 at-bats for a .379 batting average in his senior season.

“Certainly, Bryce playing for me was very special, and I couldn’t ask for a better kid. He’s an excellent student of the game and a tremendous person,” Chris Haas said of his son. “I’m going to enjoy seeing him play at the next level where he’s going to be playing for a coach that’s frankly not his dad. He is going to be a success in the next level and life.”

Bryce Haas, who has signed to continue his career at Carson-Newman University, said his final season as a Viking was a special one.

“I think we got the attention of every team in the region this year. Being a high school with a total enrollment of 85 students competing against the biggest school in the state for a regional championship is something I will never forget,” he said. “This team was gritty and was just really good at producing runs even when the offense was struggling. My dad has also coached me ever since I was 4 years old. I’m going to miss him as I move forward in my collegiate baseball career.”

While Bryce Haas has finished his high school career, he’ll be spending his summer at the historic Brooks Stadium playing for the Paducah Chiefs.

“It’s emotional for me because I played for my dad for four years in high school,” Chris Haas said. “And it’s something special to coach my sons.”

The younger of the two, Brett Haas, will be a force to be reckoned with shortly, as he enters high school this fall as a freshman.

Like Bryce Haas, another recent graduate, Parker MacCauley, played a big part in the Vikings’ success.

“Parker MacCauley really swung the bat and played well for us all year, especially down the stretch,” Chris Haas said. “I’m excited for Parker to play at the next level at Tennessee Tech. Going back to Bryce, I’m certainly excited to see him play at Carson-Newman. Those seniors, they’re great kids and players. Carson-Newman and Tennessee Tech are getting two fabulous kids.”

MacCauley came up clutch in big moments for the Vikings from the regular season to the postseason with his quick hands and natural athleticism.

MacCauley led his team with 35 hits, including six triples, in 91 at-bats.

“This season meant a lot to me. We knew going in we could be one of the best teams in the region, and we feel like we’ve proved that recently. Us seniors who have been together our whole lives wanted to lead this team to a region championship,” MacCauley said. “Unfortunately, that wasn’t the case, but we are still really proud of what this team has done. We had the best coaches all year and the best teammates. This team meant a lot to me, and it was so much fun to be able to have one last run at it. I’m going to miss those guys, and I can’t wait to watch what they do in the next few years.”

The Vikings finished the 2021 season with a 19-9 record, and with the amount of talent on hand for future rosters, they are only getting started.

“We’re trying to prepare our kids for the next chapter in their lives. It is a big part of what we do in our program, and certainly, our seniors are prepared for their next challenge,” Chris Haas said. “And we’re developing the young guys behind them and certainly are very appreciative of those seniors’ leadership in mentoring the young talent that we have. And certainly, I am excited for St Mary’s baseball in the future.”