Above: Collecting sports cards has been a national pastime since World War I, thanks to the T-206 Honus Wagner from the American Tobacco Company. In 1952, Topps created the first modern baseball card set, and a hobby ensued. Left: Panini’s 2019-20 “Mosaic” Collection hasn’t been released yet, but its promo card — this Ja Morant rookie card — will be one of many highly sought from its packages. 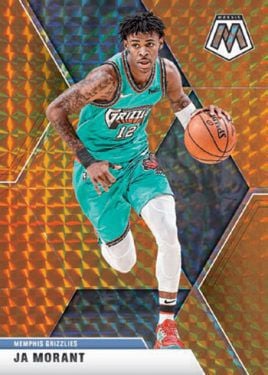 Panini's 2019-20 "Mosaic" Collection hasn't been released yet, but its promo card ... this Ja Morant rookie card ... will be one of many highly sought from its packages. 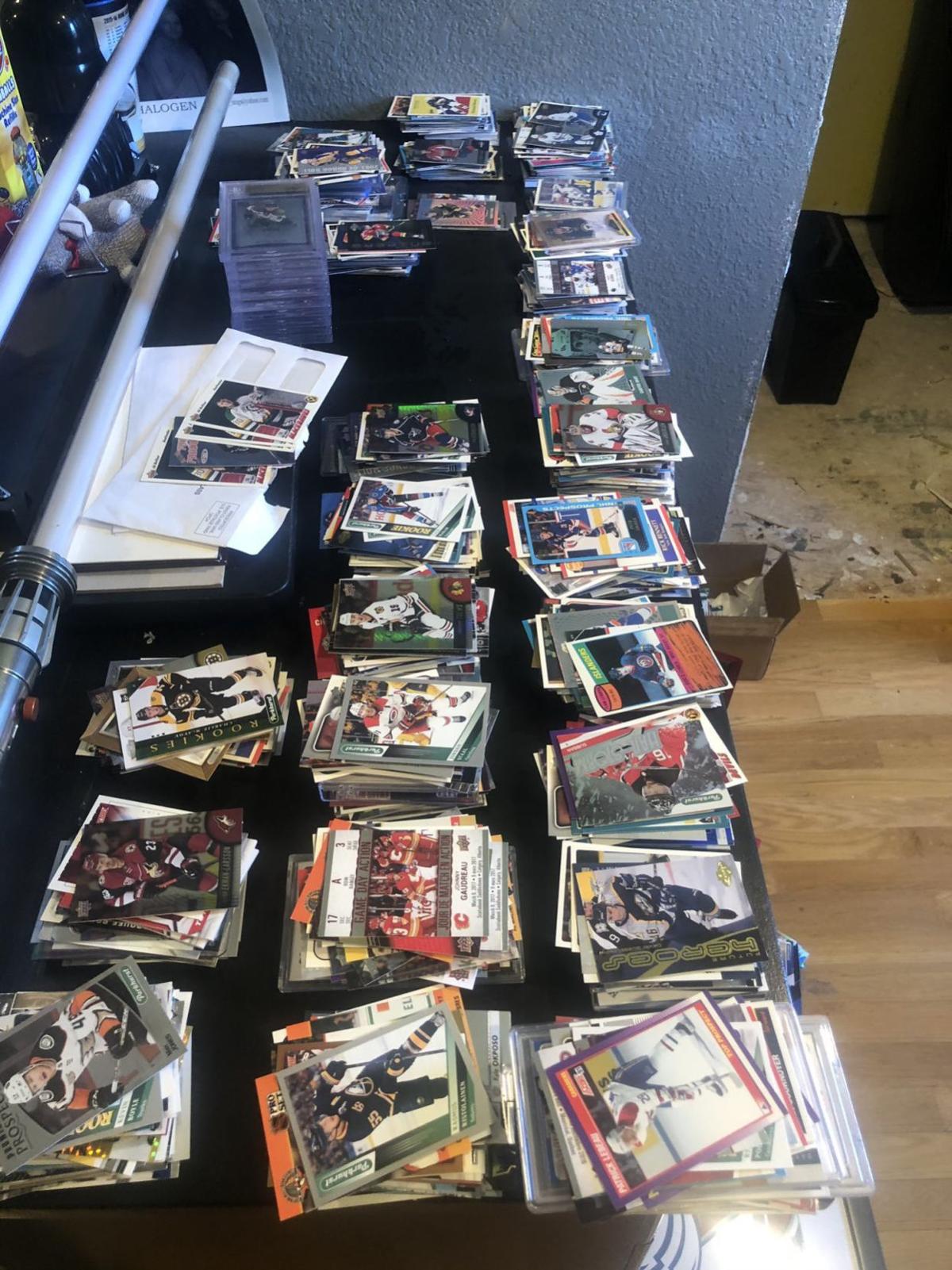 Murray native Michael D’Elia is one of many across the country sending out “#randomactsofkindness,” repackaging semi-valuable cards of different sports and re-gifting them to prospective young fans looking to get involved with the collecting hobby.

Above: Collecting sports cards has been a national pastime since World War I, thanks to the T-206 Honus Wagner from the American Tobacco Company. In 1952, Topps created the first modern baseball card set, and a hobby ensued. Left: Panini’s 2019-20 “Mosaic” Collection hasn’t been released yet, but its promo card — this Ja Morant rookie card — will be one of many highly sought from its packages.

Panini's 2019-20 "Mosaic" Collection hasn't been released yet, but its promo card ... this Ja Morant rookie card ... will be one of many highly sought from its packages.

Murray native Michael D’Elia is one of many across the country sending out “#randomactsofkindness,” repackaging semi-valuable cards of different sports and re-gifting them to prospective young fans looking to get involved with the collecting hobby.

In 1952, the Topps Chewing Gum Company of Brooklyn issued what many consider to be the first — and quintessential — modern baseball card set. Its development and production is often credited as the beginning foundation and rubric of a hobby now seven decades old and counting.

For as long as there is sport, the list will be virtually endless. And as sports icons cement their legacy with wins, records and immortality, their respective cardboard caricatures will often become collectible cash.

Over the last nine months, this explosion and fervor for card collecting has crept into west Kentucky and spread like wildfire. Walmarts in Paducah, Benton, Murray, Mayfield, Princeton, Hopkinsville, Madisonville and Henderson — as well as outlying cities like Evansville (Indiana) and Paris (Tennessee) — have entire chunks missing in their card lanes. Empty boxes and racks disheveled, as if ravenous wolves had picked the bones of an unsuspecting animal clean.

And this is just eBay.com. A quick search on Amazon.com, as well as local, regional and national hobby shops online, shows similar, stark prices.

“It’s just crazy,” notes longtime card collector Jacob Teasley. “Other than LeBron, I haven’t seen this. I don’t even think it was this bad with LeBron.”

The Bardwell native has been cracking wax since his mom took him to Gore’s in Lone Oak for his first pack of baseball cards. Born in 1983, he — like so many collectors these days — endured the “junk wax era,” in which the hobby’s top distributors (from roughly 1987-1994) mass produced cards to the point of diminished returns.

A set of 1988 Donruss baseball, pretty as it is, might as well serve as a doorstop.

A set of 1991 Topps football — save for legendary Dallas Cowboys and Arizona Cardinals running back Emmitt Smith’s rookie card — could be the next log on anyone’s fire.

Only the highest-graded cards from the decade (scored 9.5 or better, based on centering, luster, corner/edge integrity) mean anything, and when the top cards were culled and corralled by high bidders, it changed the market out of favor to the casual collector and dried up demand.

Teasley is seeing a similar trend in 2020. There are more sets. More inserts. More rare commodities. Jerseys. Autographs. Relics of the game, right in the palm of a collector’s hand.

But the price, while mostly affordable for a full-time employee, isn’t as kid friendly.

“It’s big boys with money,” he said. “Grown-ups buying into cards, and these kids can’t afford nothing.”

The local interest in Morant and Williamson does makes sense.

Having spent the past two years fine-tuning his skills at MSU, Morant is on an ascendant path to the 2019-20 NBA Rookie of the Year award. He has intrinsic value within the immediate region, and many fans, enthusiasts and collectors want a piece of the history.

Williamson’s trajectory is much the same. He’s largely been touted as one of the most fearsome future prospects in recent NBA history, and had he played more than 19 games for the New Orleans Pelicans — in which he averaged 23.6 points on 58.9% shooting — the Rookie of the Year award track would be contentious.

But these early rookie-card prices aren’t based in a local market. These are global prices, proving Morant and Williamson have value far beyond the reaches of collectors in west Kentucky.

Teasley and his wife, Lauren (Paducah Tilghman’s athletic trainer), do spend a lot of their off time breaking large amounts of product with great results.

“She’s got the hot hand,” he laughed. “I’ll buy hobby boxes and have them shipped to the house, and she always pulls good stuff.”

But it’s also led him to passing along cards he’s not interested in keeping or selling to the next generation, with two “youthful” neighbors quietly enjoying bolstered card collections thanks to his generosity.

“That card meant more to him than to me,” Teasley said. “If you can’t share and get a younger generation in it, then (the hobby) is going to die. That’s what happened in the ‘junk wax era.’ They mass produced it so much, and the good stuff got so expensive that the kids couldn’t get into it. And they quit collecting.

“If we can keep the kids in it, that’s the best thing about it.”

Feb. 6 was the last time Murray native Michael D’Elia found a box of 2019-20 basketball cards in the general area.

He agrees with Teasley on both fronts, in that he’s not seen this type of excitement in the hobby, and that prices are driving away would-be collectors, who now have even more time on their hands underneath quarantine restrictions with the pandemic coronavirus.

“I think over the past few years, the online presence has built the hobby back up with such things as ‘live breaks’ and such,” he said. “(And) I think people kind of forgot about the hobby around here — especially with one card shop. For sure this area has picked up because of Ja, but I think some of the Jordan-era collectors have kids now, and they are sharing the pack opening with them.

“Sadly, the prices on hobby packs have gone way up.”

In order to combat the price gouging and keep interest flowing, he’s joined up with several collectors from across the North American continent — repackaging extra cards he’s amassed, some valuable, and simply re-gifting them as part of a trading circuit.

“It’s #randomactsofkindness,” he added. “A ton of people (connect) on Twitter, and Upper Deck does awesome stuff for the kids. I’ve sent free cards to a bunch of kids, and a few of the guys I follow are amazing with the ‘RAKs.’ ”