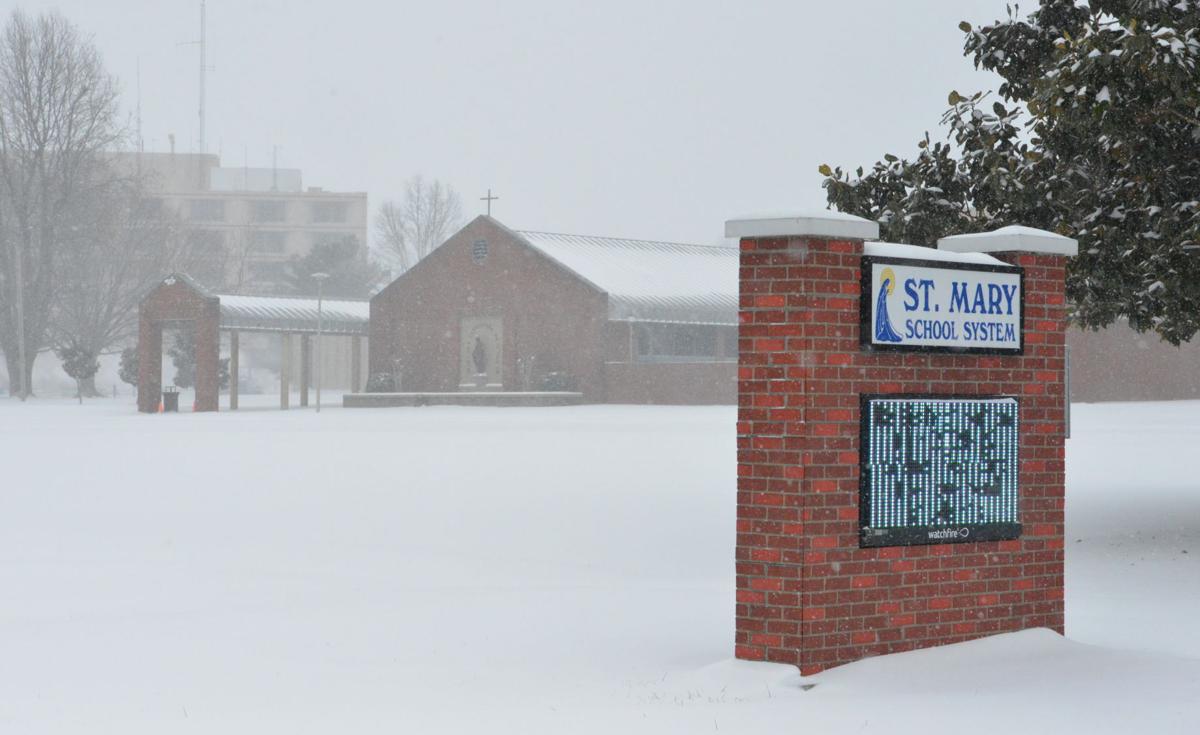 Snow blankets the parking lot outside St. Mary School System on Monday. The snowstorm canceled the St. Mary girls and boys basketball teams’ games at McCracken County and most other games on Monday’s schedule. The inclement weather threatens to take other games off the schedule for the remainder of the week. 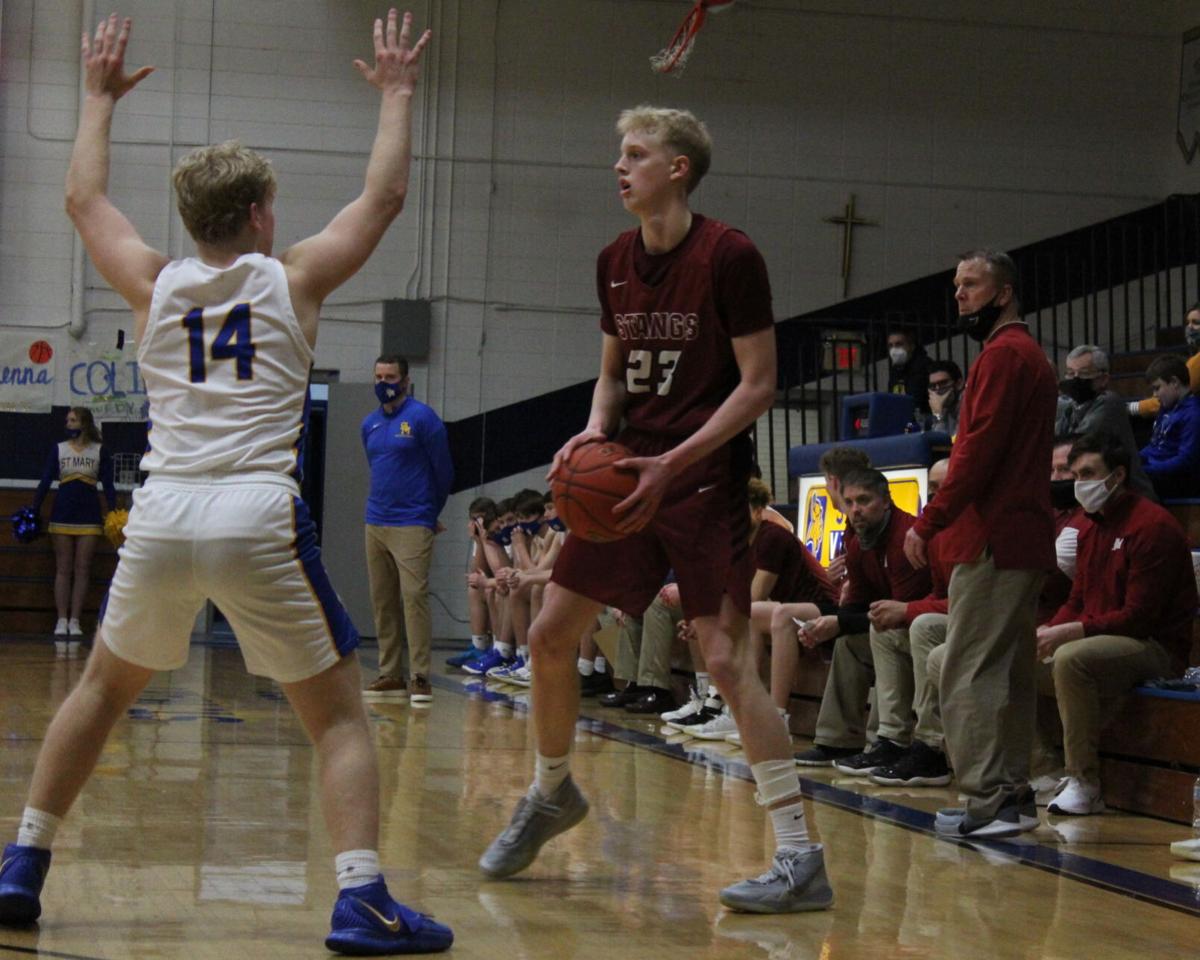 Snow blankets the parking lot outside St. Mary School System on Monday. The snowstorm canceled the St. Mary girls and boys basketball teams’ games at McCracken County and most other games on Monday’s schedule. The inclement weather threatens to take other games off the schedule for the remainder of the week.

Monday’s heavy snowfall and the threat of more snow later this week — totaling anywhere from 8 to 12 inches — has thrown a wrench into the high school basketball schedule.

“This weather is wreaking havoc,” McCracken County boys basketball head coach Burlin Brower said. “We have possibly a whole week of being out.”

With up to 3 inches of snow in the forecast for Monday, McCracken County High School canceled its doubleheader scheduled for that night against St. Mary. And those two schools weren’t alone -- the slate of games continued to dwindle throughout the day as cancelations continued to be announced.

The doubleheader matchup between McCracken County and St. Mary was the highest profile of cancelations for the Paducah area. While the McCracken girls and boys teams routed their St. Mary counterparts earlier this season — the Lady Mustangs won 68-12, and the Mustangs came out on top 69-36 — getting games played is not always about the end result, Brower said. That’s why there will likely be efforts made to reschedule this game at some point down the line.

“I think everybody is trying to make up every game. I feel like I owe it to the seniors especially. It’s their senior year, so every game is important,” Brower said. “You can’t worry about the wins and losses right now. Just let the kids play. You hate to see any game get taken away from them. If I was a player, I’d want my coach to schedule every game he could.”

Brower spoke to The Sun on Monday afternoon with his team coming off a hard-fought 66-61 home win over Marshall County in a rare Sunday game. Initially scheduled for last Friday, the game was postponed because of icy conditions, and both teams were amenable to playing on Sunday.

“That’s a tough game to play on a Sunday afternoon,” Brower said. “Sunday afternoon regular-season games are almost unheard of, but we’re lucky that both of our administrations allowed us to play it.”

The teams at St. Mary haven’t been quite as fortunate when it comes to getting games played. On top of the inclement weather, they’ve dealt with a COVID-induced pause in play that canceled multiple games over the past two weeks. The Lady Vikings haven’t played since Jan. 28 and have missed four games while the Vikings missed six games beginning Jan. 29 before returning to the court on Friday in a 62-60 loss to Hickman County.

Speaking to The Sun on Monday, St. Mary boys basketball head coach Chase Denson lamented the cancelation of so many of his team’s games.

“I feel bad for our kids, especially the seniors,” he said. “We’re coming off a period of like 15 days without a game, and now we’re off of quarantine, and now we have to deal with weather. We had a practice yesterday (Sunday), which was our first one since Wednesday, Jan. 27, so it was nice to get a practice in at least. But it’s frustrating to miss games.”

Denson said he and his team were certainly looking forward to facing the Mustangs, who are 13-3 on the season and currently on a 10-game winning streak.

“They’re playing the best basketball in the region right now, and it’s always a good opportunity to go over and play them on their home court. It’s a good experience for our kids,” he said. “Obviously, it would be a big-time test for us, but it’s always exciting to play the best teams in the region.”

Like Brower, Denson is hopeful the game can be played at a later date.

“We have a short amount of time left in the season with some games already scheduled, so it will be kind of difficult. But we’re definitely open to it if we can find a date that works for both teams,” he said.

Looking ahead, the inclement weather threatens the schedule for the remainder of the week, which is set to include the All “A” Classic state tournament at Eastern Kentucky University and the Marshall County HoopFest.

After Monday’s cancelation, the only other game on the Mustangs’ slate this week is Tuesday against Community Christian Academy as part of a doubleheader with the girls’ teams. Should that one get canceled as well, the schools will have no choice but to make it up, Brower said.

“I think the CCA game pretty much has to be made up because you have to play everybody in your district at least once,” he said.

However, the Mustangs will not make up their game from Feb. 5 against Paducah Tilghman that was nixed due to the latter being in a COVID-related pause.

“For them (Tilghman) to play it, they would have to cancel somebody else, and we’re fine with not playing it,” Brower said.

With the end of the regular season less than a month away, teams will have to decide just how many of their missed games they want to try to make up. In what marks the final season of their high school careers, seniors like McCracken’s Noah Dumas are grateful for any and all games they get to play.

“I didn’t think we were going to have a season this year (because of the pandemic), so we’re grateful for whatever games we get,” he said.