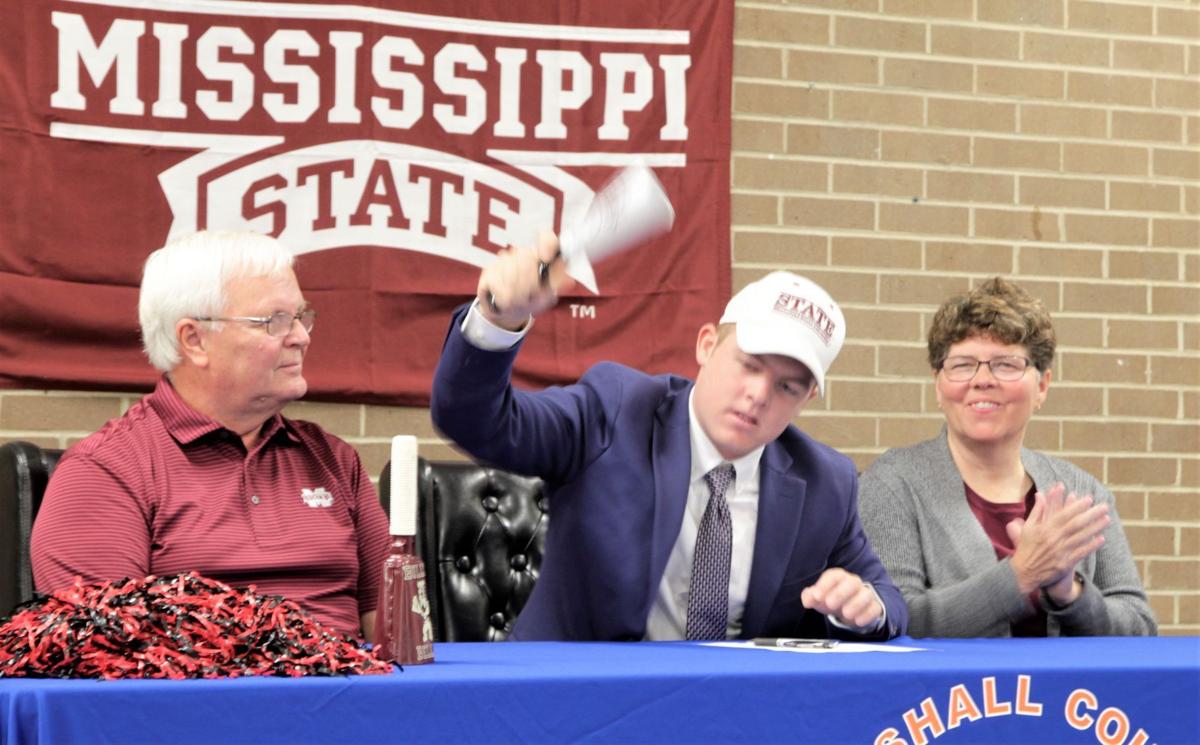 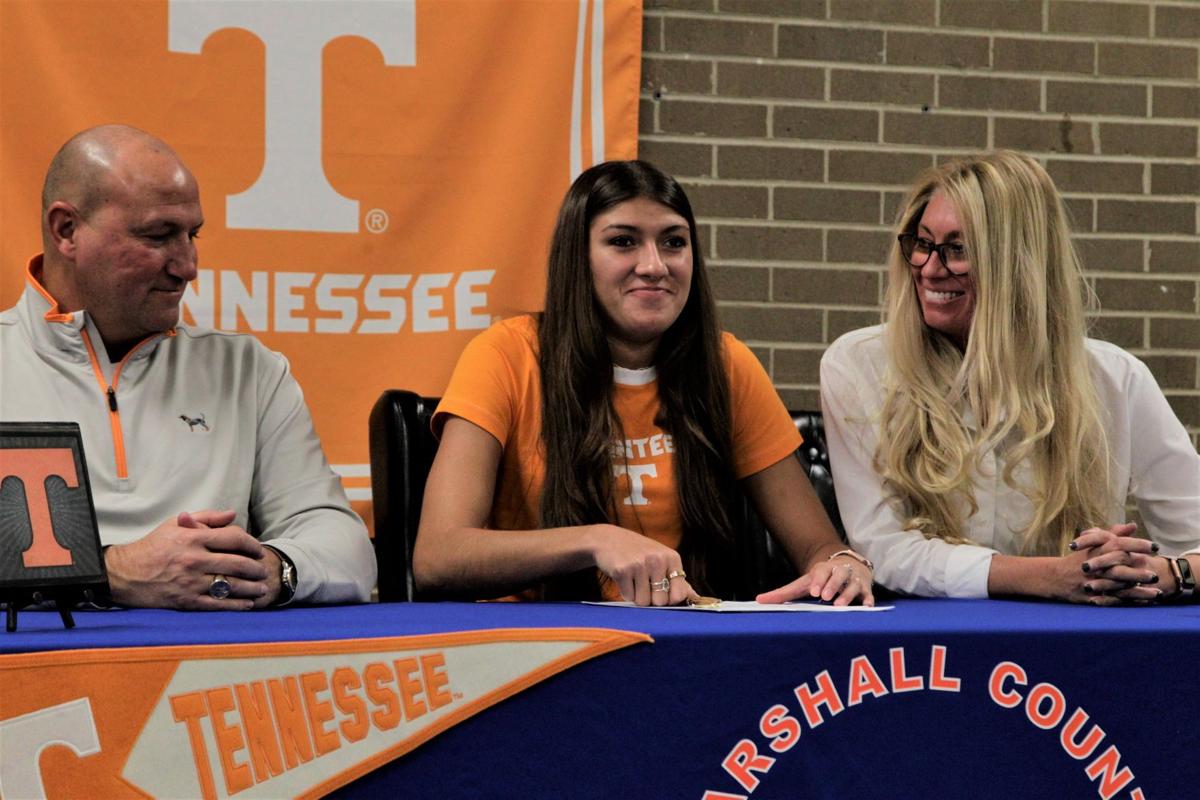 Marshall County’s Sophie Galloway is all smiles after signing with Tennessee track and field on Wednesday morning at Marshall County High School in Draffenville. 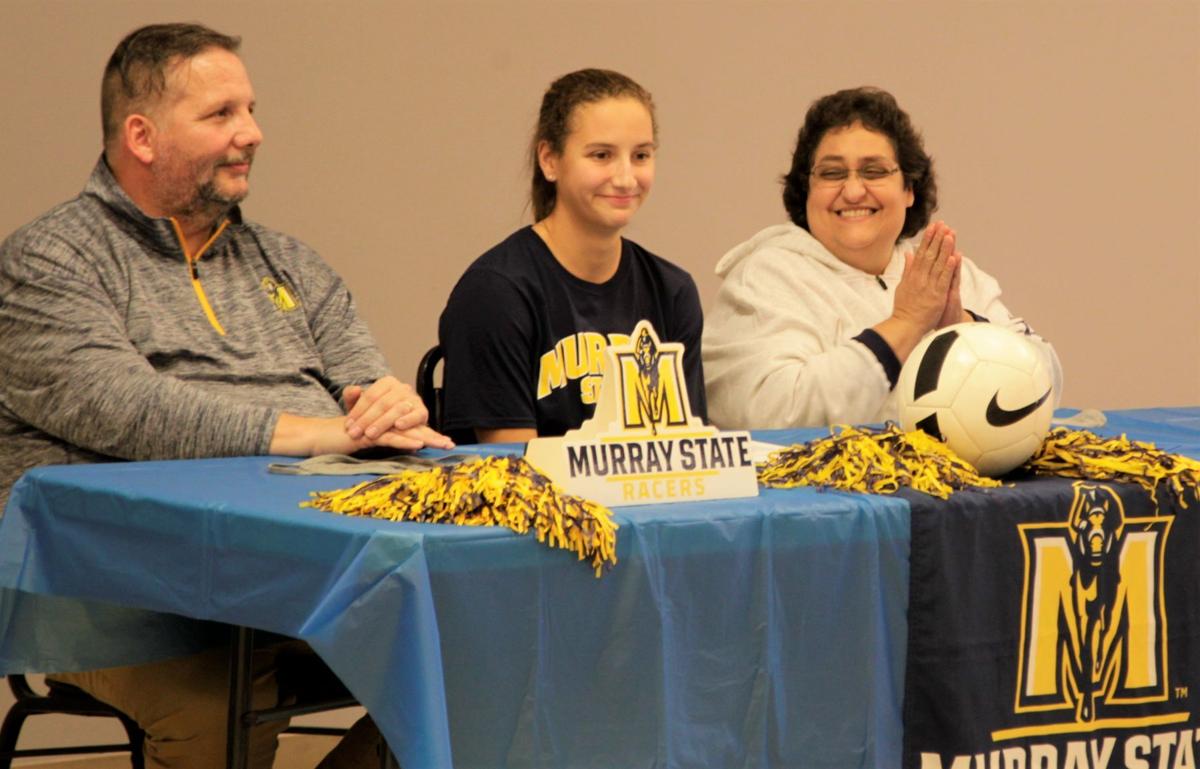 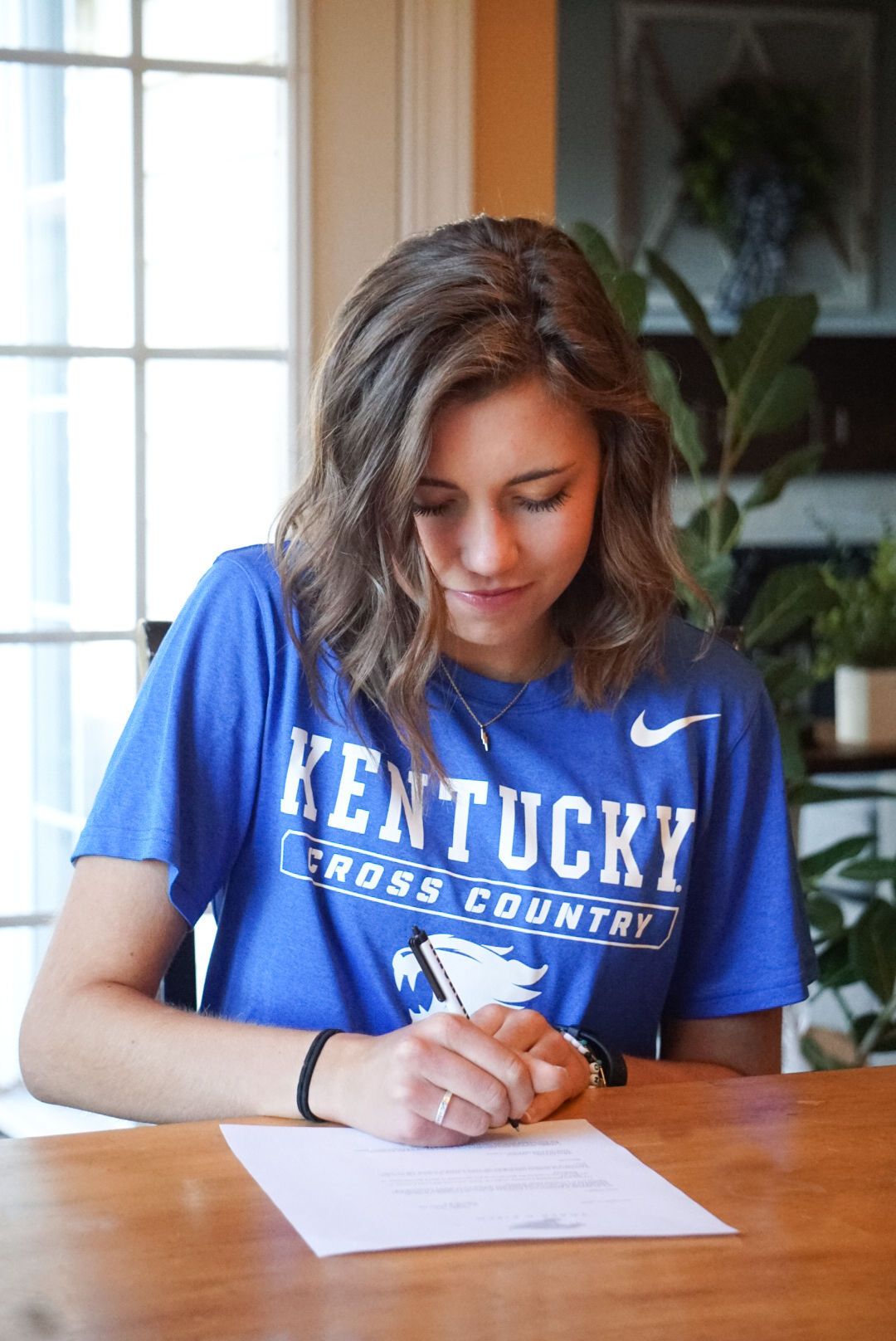 McCracken County’s Maggie Aydt signed with University of Kentucky cross country on Tuesday, in the comforts of her home. 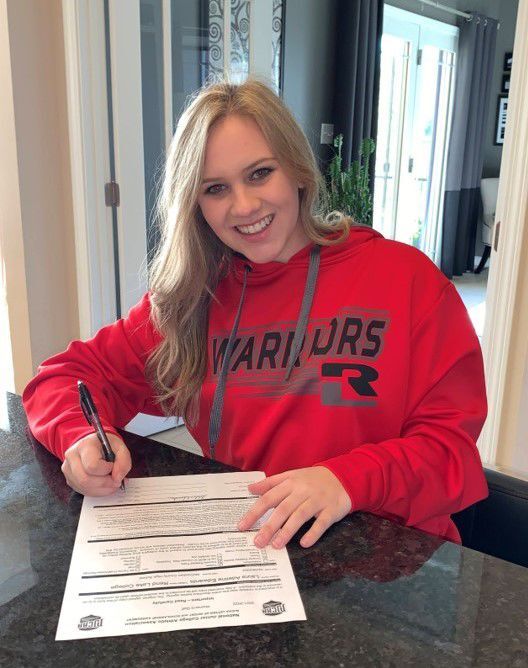 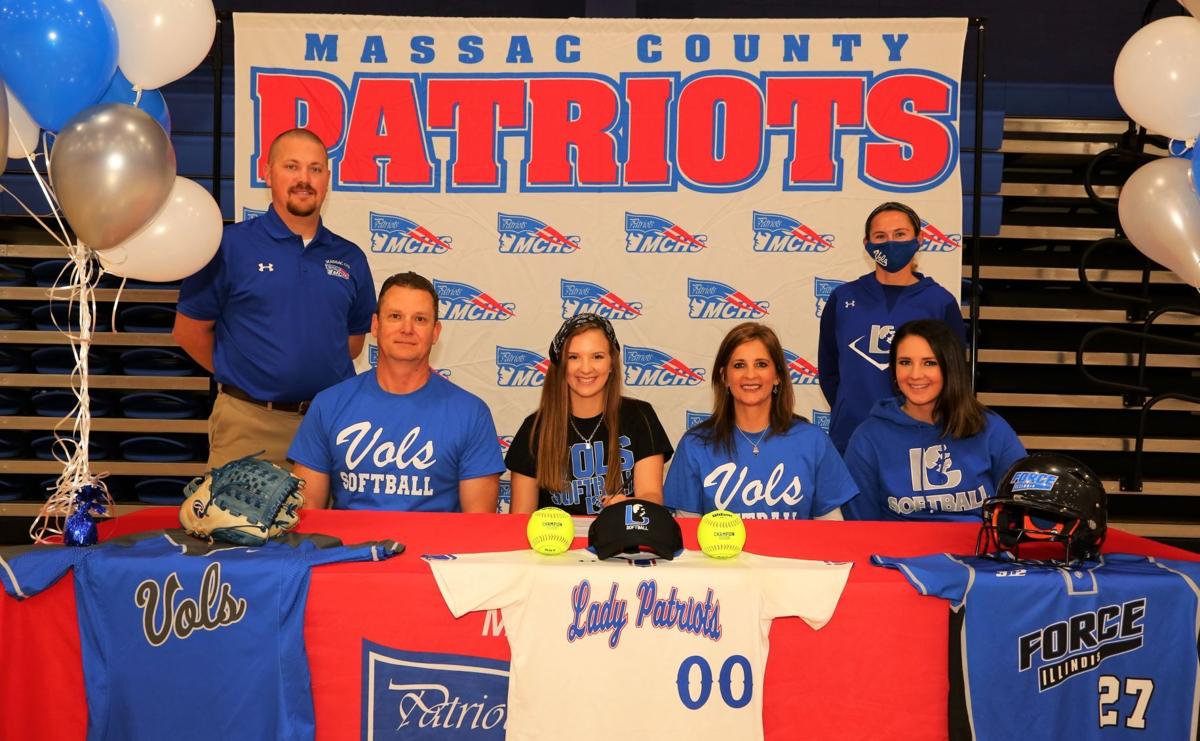 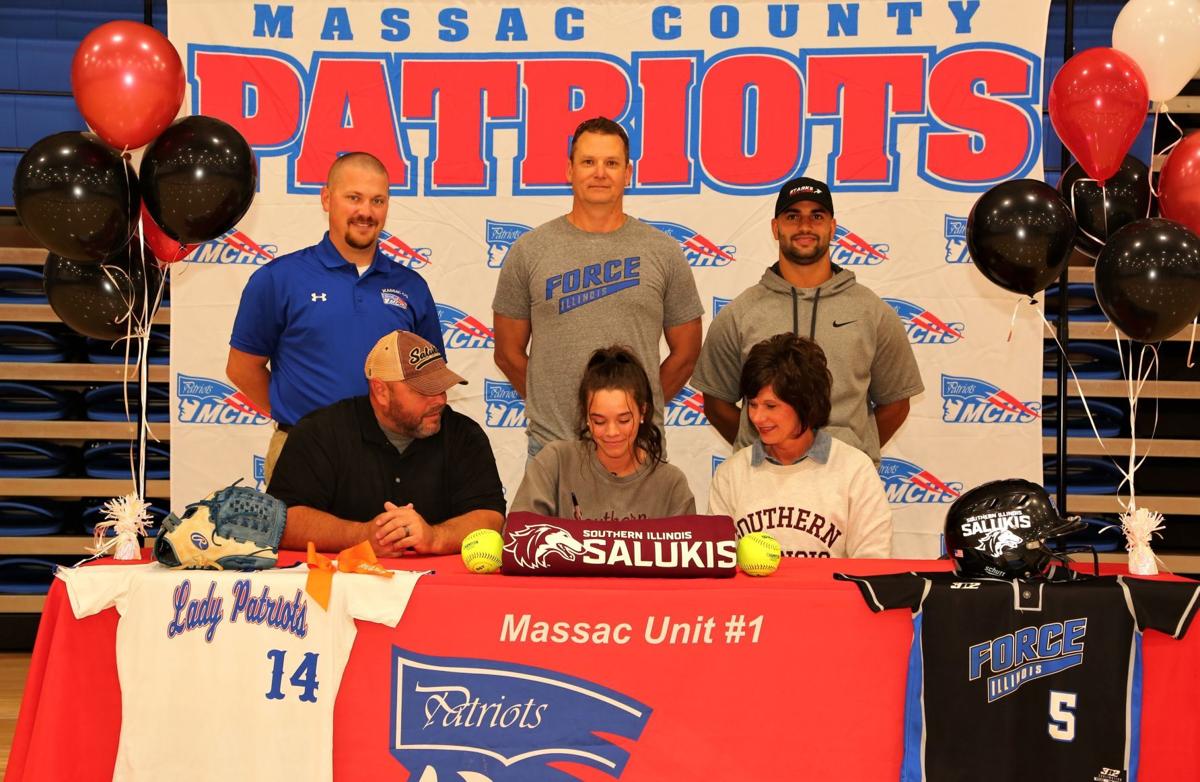 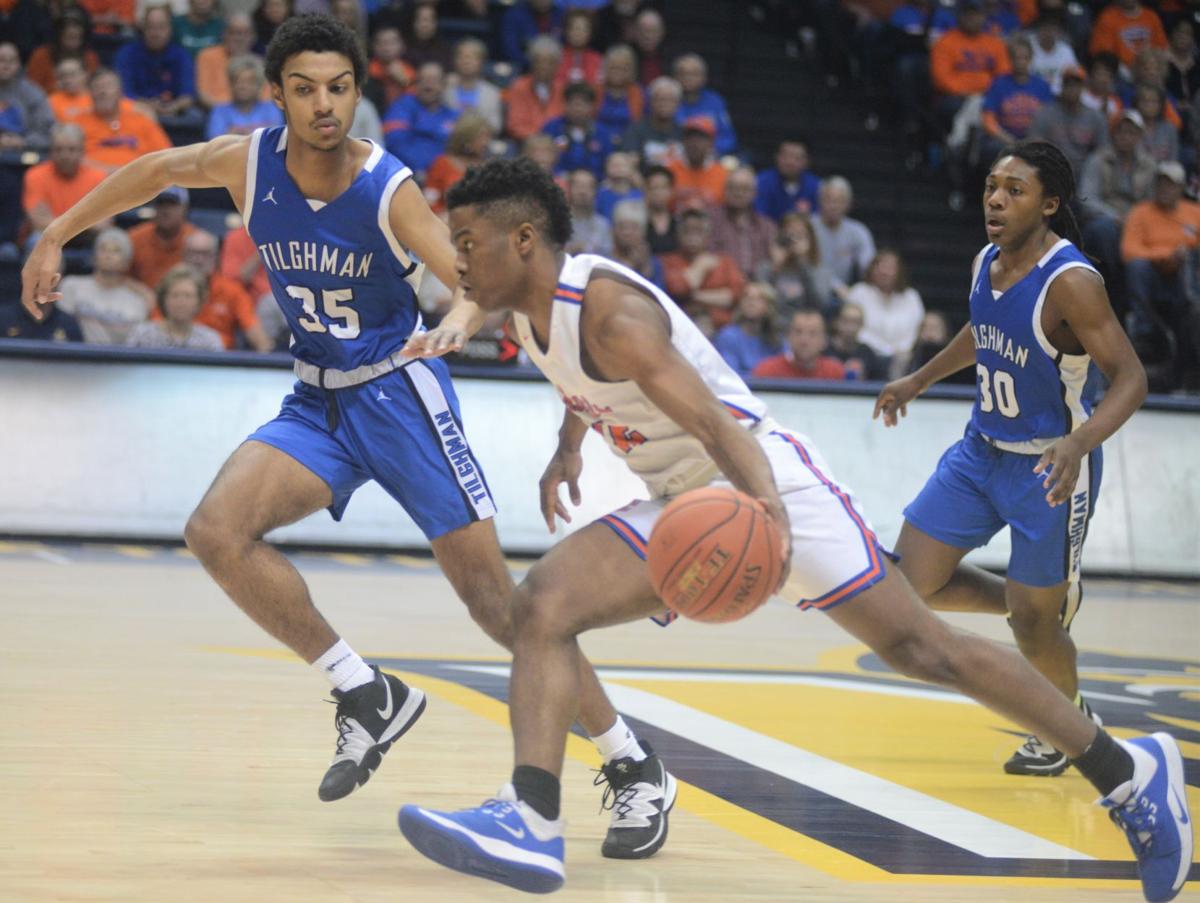 In a private ceremony not on the school’s campus, Marshall County’s Zion Harmon (dribbling) inked his national letter of intent on Wednesday afternoon to join Western Kentucky University men’s basketball as part of the Class of 2021. The vaunted point guard, considered one of the nation’s top 30 players in his class, is the prohibitive favorite to earn the state’s most prestigious award following the 2020-21 campaign: “Mr. Basketball.”

Marshall County’s Sophie Galloway is all smiles after signing with Tennessee track and field on Wednesday morning at Marshall County High School in Draffenville.

McCracken County’s Maggie Aydt signed with University of Kentucky cross country on Tuesday, in the comforts of her home.

In a private ceremony not on the school’s campus, Marshall County’s Zion Harmon (dribbling) inked his national letter of intent on Wednesday afternoon to join Western Kentucky University men’s basketball as part of the Class of 2021. The vaunted point guard, considered one of the nation’s top 30 players in his class, is the prohibitive favorite to earn the state’s most prestigious award following the 2020-21 campaign: “Mr. Basketball.”

Dressed for the occasion with a school hat, a maroon-tinted tie, maroon khakis and a leather belt branded with the school’s logo, Marshall County’s Jay Nimmo confirmed the inevitable on Wednesday morning, when he inked his national letter of intent with the Mississippi State Bulldogs men’s golf team as a part of the Class of 2021.

He even rang the cowbell, further signifying he’s beyond ready for Division I golf in Starkville, Mississippi, and the SEC.

“I’ve got the whole shebang,” he said.

Including, the golf game to go with it.

Currently ranked 35th overall and 15th in the Class of 2021 among his AJGA constituents, Nimmo finished with a 73.9 scoring average during his eight years with Marshall County boys golf — and with a 69.71 scoring average over his junior and senior seasons.

His longtime coach, Keith Bell, called Nimmo “one of the best golfers, if not ‘the’ best golfer, in Marshall County’s history.”

Strong words for a strong player, who’s going to spend the next few months getting even stronger through the AJGA circuit before heading into the collegiate ranks.

“If I can get better every day, by the time I get down there, there will be a good chance for me to contribute to the program and take it to the next level,” Nimmo said.

A five-time state champion — twice in the long jump, twice in the triple jump and once in the 100-meter hurdles — and a three time Gatorade “Player of the Year” for the state of Kentucky, Marshall County’s Sophie Galloway cemented her recent commitment on Wednesday afternoon, when she signed her national letter of intent for track and field at the University of Tennessee.

Out of high school competition for the past 18 months due to the coronavirus, Galloway has taken this time to prepare for the heptathlon, which she’ll be competing in when she heads to Knoxville to join the Vols.

“I just think I’m a diverse athlete,” she said. “I don’t just need to be jumping. I think that I need to be able to sprint and to throw and jump again. And I just love it. I think it’s a lot more fun. Instead of going to a one-day track meet, you get to do it over the span of two days.”

Perhaps the only thing stopping Galloway from competing in the decathlon is the fact that it’s not as readily available to women at the competitive level. The first women’s open decathlon championship under USATF didn’t happen until the summer of 2018, won by Kansas University star and then-senior Morgan Griffiths.

For now, Galloway is consumed with the idea of mastering these seven events — and will be using this basketball season with the Lady Marshals as the silence to her mechanism.

Then, it’s back to spring training.

“As a freshman, I’m just hoping to get used to the new coaching staff — and hopefully, at least, be an SEC champion,” she added. “But I’m just going to try to take things slow and better my events.”

A three-sport star for the Murray Lady Tigers, senior Angela Gierhart probably could’ve gotten some looks in basketball or softball.

But soccer is her true love, and on Wednesday afternoon, she inked her national letter of intent to join a near-and-dear program in the Murray State Racers under Matt Lodge as part of the Class of 2021.

For years, Gierhart has been die-hard in her attendance to MSU games — often perched on “The Hill” next to Cutchin Field.

Now, she’s just the next First Region star to join the program, going from MSU fan to MSU forward.

“It’s just the atmosphere,” she said about her choice. “It’s a great atmosphere to play for, and everyone loves going to their games. And there’s so much support there.”

Gierhart knows a thing or two about support. Often labeled as a striker, and deservedly so, her longtime coach in Shauna Traylor employed her in multiple positions during her four years of varsity. In 82 games, she finished with 50 goals, 49 assists and 56 career saves at keeper, truly showcasing a versatility not often seen in First Region girls soccer.

Much like his predecessor and friend, Jeremy Groves, Lodge has had zero issue identifying with local, homegrown talent.

So what will she play at Murray State?

“Probably midfield or forward,” Gierhart said, then laughed. “(Lodge) said my days at goalie are over.”

Fresh off of another top-10 finish in the KHSAA Class 3A State Championships, McCracken County’s Maggie Aydt spent Tuesday morning in the comforts of her home, signing her national letter of intent to join the cross country program at the University of Kentucky in Lexington.

A six-year letter-winner for golf with the Lady Mustangs, Edwards was a key member of the 2016 First Region championship team, as well as the 2015 and 2018 First Region runner-up squads.

As such, she’s a three-time participant in the KHSAA Girls Golf State Tournament in Bowling Green, and after two years with the Warriors, Edwards will have the opportunity to join a four-year women’s golf program should the opportunity arrive.

In a Veterans Day signing, Massac County’s Macy Pierce signed a national letter of intent to attend John A. Logan College in Carterville, Illinois, and play softball for the Vols.

In Pierce, the Vols are getting a solid glove and a potent bat. She made up her mind about JALC last Halloween.

She played volleyball her freshman year, but then decided to focus on softball, and made all-conference her sophomore year and was awarded the team’s offensive award in 2019.

She said her most memorable moment so far at Massac County was beating Marion in regionals in the 3A semifinals at Carbondale in 2019. In the regional finals that year, Pierce also clubbed a critical three-run homer against Carbondale, but the moment lost its luster as the Lady Terriers won in the ninth inning on a leadoff home run.

Off the diamond, Pierce is a member of the National Honor Society. As for her future, Pierce said she would like to play at a four-year school after JALC, but needs time to decide on a career path.

Massac County’s Emma Austin put her name on a national letter of intent Wednesday to attend Southern Illinois University and play softball for the Salukis.

In the speedy Austin, the Salukis are getting a top-of-the-order bat and a top-notch “fly chaser.” She patrols center field for Massac County, but said that wherever the Salukis want her to play will be all right with her.

An “on-base machine,” Austin said her most memorable moment so far was a home run against Carbondale, her first. Like her teammate in Pierce, Austin was superb in the 2019 regional finals against Carbondale. She led the game off with an all-out-hustle triple and recorded a multi-hit game in the wonderfully-played extra-inning loss to the Lady Terriers.

Austin made all-conference her sophomore year and was awarded the team’s defensive award in 2019.

Off the diamond, Austin is a member of the Fellowship of Christian Athletes and the National Honor Society. She thinks a career in the field of physical therapy, or something related, may be on the horizon when she hangs up her cleats.