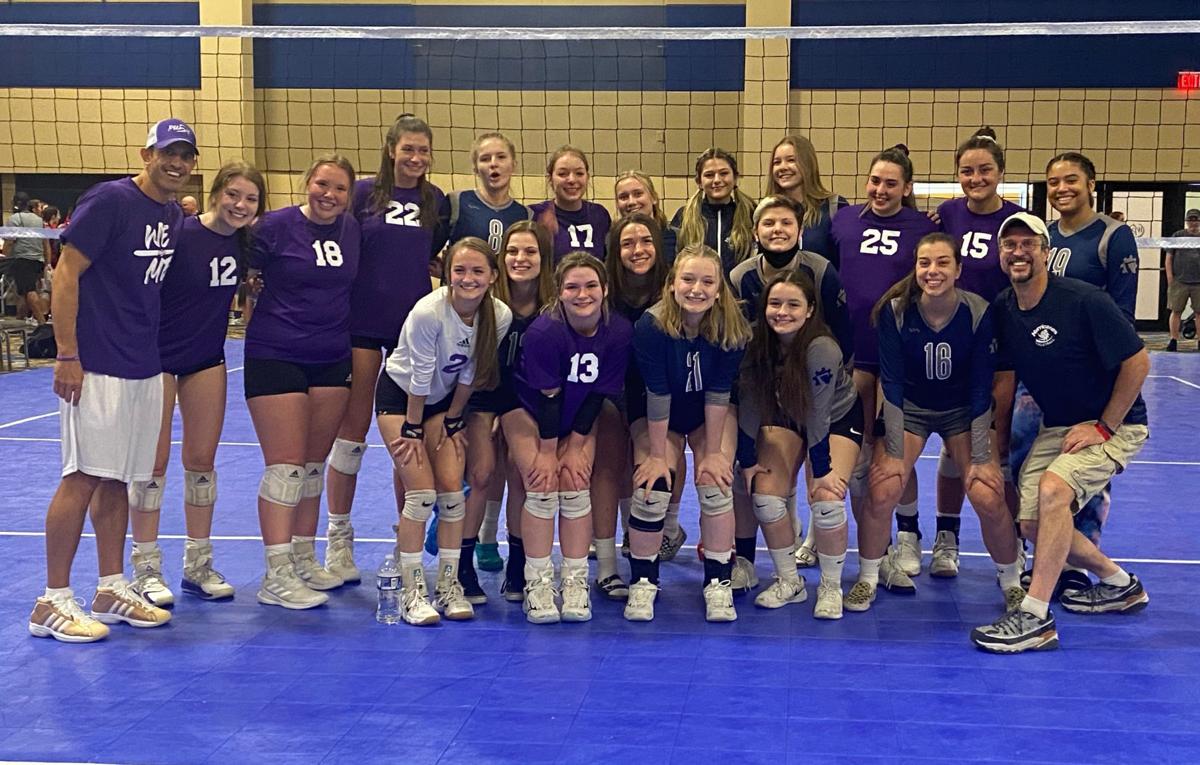 Coaches and players from PU5H VBC and the Hurricanes teams gather together on the court at the AAU West Coast Championships in Las Vegas. The two teams bonded after playing each other, and each team continued to support the other throughout the next two days of competition. 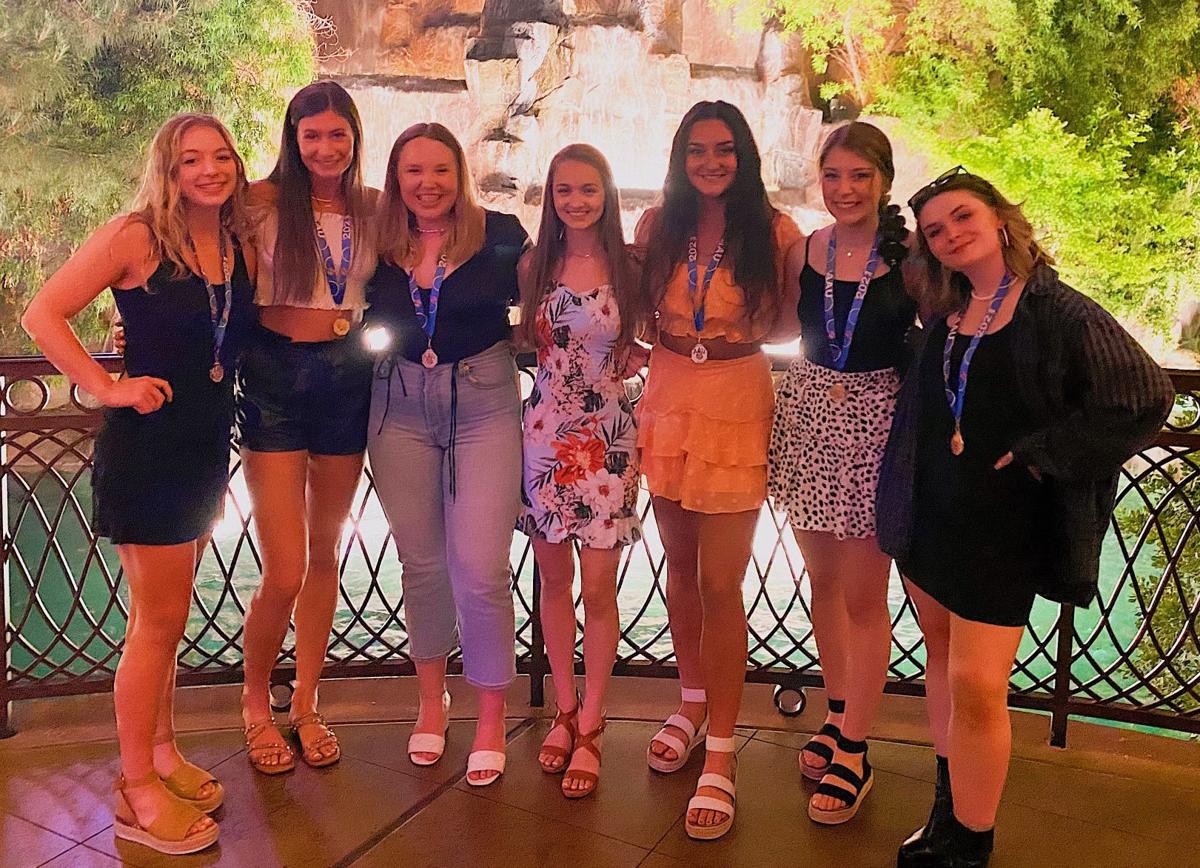 Coaches and players from PU5H VBC and the Hurricanes teams gather together on the court at the AAU West Coast Championships in Las Vegas. The two teams bonded after playing each other, and each team continued to support the other throughout the next two days of competition.

The PU5H VBC (Push 5 Volleyball Club) 18 team had quite the experience in Las Vegas late last month. They got to experience the sights and sounds of the Vegas strip and capped off their trip as the top team in the AAU West Coast Championships club volleyball tournament.

“It was surreal because we knew we were competing for a West Coast championship, and we were the only team from anywhere near our area that was attending,” team member Audrey Cariveau told The Sun of the championship experience.

Coached by Bret Cariveau, the Mayfield-based PU5H team played nine games in the three-day event spanning May 29-31, going 8-1 in that stretch en route to the title. And they did it all with a target on their back after entering as the overall No. 1 seed.

“We came in as the overall No. 1, so it was kind of nerve-wracking because we knew that teams wanted to play us and beat us,” Audrey Cariveau said. “When you know you’re the No. 1 seed, you can’t get a big head and get too cocky and confident because there are still going to be teams that are just as good as you, if not better. We played multiple teams that were just as good as us, and we just had to show them that we were No. 1 for a reason.”

Following pool play that featured 28 of the best club teams from the West Coast and other parts of the U.S., PU5H won three straight games in the championship tournament to claim the title. Upon returning to western Kentucky, Cariveau, a student at Graves County High School, joined Marshall County’s Halle Langhi and Paducah Tilghman’s Jennifer Goddard in talking with The Sun about their experience in Las Vegas, which they all thoroughly enjoyed.

The gamesPU5H entered the AAU West Coast Championships as one of the few teams from outside the West Coast region in the event and with relatively little fanfare. Nonetheless, they were considered the No. 1 overall seed.

“I was surprised that we were the favorites because we were going into this huge tournament,” Langhi said. “But being the No. 1 seed was definitely a confidence-booster.”

Goddard added that this new role — being the hunted instead of the hunter — pushed the team to play some of the best volleyball it has played all season.

“Normally we’re not seeded No. 1 going in, so our expectation is to play the No. 1-seeded team and beat them,” she said. “To go in knowing that we were in that No. 1 position, we knew everyone was going to play extra hard against us. It added pressure, but it also pushed us to play better, and I think we played the best at this tournament that we have all year.”

The West Coast teams’ different playing styles took some getting used to, though, Cariveau said.

“They definitely play a lot different than the teams around here. They’re able to go out and play on beach courts, so most of those teams have higher stamina, and they’re able to jump higher because they have different training,” she said. “You definitely have to adjust and learn how to play to their style.”

“Audrey and Halle played really well all weekend, and Bailey played probably the best she’s ever played,” he said. “And Jen has only been setting for five months, but her consistency is incredible. She’s giving the hitters hittable balls that they can score on.”

Audrey Cariveau impressed herself with her play.

“I would say this was one of my better tournaments that I’ve played in this club season solely because I was able to score against the big blockers,” she said. “Even if I wasn’t hitting the ball super hard every time, I was still able to find ways to score.”

Goddard added that those matches were some of her “best games.”

“At this tournament, I was like, ‘It’s time to be aggressive. It’s time to put the ball down. We need this,’ ” she said. “So I went outside my comfort zone a bit and tried new things, and that’s what set me up for showing improvement.”

Langhi, meanwhile, said she started out a little nervous but began playing better thanks to her coach’s encouragement.

This is Langhi’s first year in club volleyball, and Goddard said she “really flourished” in Vegas.

“Halle used to be kind of nervous, but in this tournament, she was like, ‘Set me. I want this winning point. Give it to me again — I’ve got it,’ ” Goddard said. “To see her become her true potential was crazy. She was serving and hitting and passing, and she even set some balls. She did amazing, and it was great to see that.”

It wasn’t all smooth sailing, though, as PU5H faced its share of deficits and three-set matches. But, more often than not, they found a way to erase those deficits and win.

“We have a bad habit of digging ourselves holes, but we always seem to get out of them,” Langhi said. “What helps is that we’re encouraging to each other. When we get down, we try to keep our energy up, which really helps. We don’t give up — we just keep fighting.”

The championshipThe team’s play ultimately led to the championship game against the high-powered Amazons 18 Mambas team out of California. Cariveau said several of the girls’ eyes widened at the sight of the opposition warming up, as the Mambas boasted plenty of height and hitting power. But PU5H wasn’t intimidated, sweeping the match in two sets — 25-22 and 25-18.

Goddard said PU5H had its eyes on the prize the whole time.

“The energy we had that day was so intense,” she said. “Everyone was like, ‘Get me the ball. I want it.’ That change in energy was so amazing.”

The victory was a big one for the PU5H program.

“It was awesome. It made us all feel good about ourselves,” Langhi said of the championship victory.

“It was probably one of the most incredible things that happened this season,” she said. “Coming in and taking that title shows that, ‘Hey, we might be from a small town in Kentucky, but we’re playing against big-name teams and winning.’ ”

For their efforts, the girls of PU5H earned a celebratory meal from their coach.

“After we won, we went out and ate at a Brazilian steakhouse, which was really fun and crazy because none of us had ever eaten somewhere that nice,” Cariveau said.

“That night was filled with pictures and bonding and talking about the tournament,” she said. “It was bittersweet because, yes, everyone was having an amazing time, but at the same time, we were realizing that this amazing trip was coming to an end.”

Busy scheduleThe AAU West Coast Championships packed a lot of games into three days, and teams weren’t afforded much down time to enjoy Vegas as a

“There was never a time when we were just sitting there,” Goddard said. “We were either scouting other teams, reffing, warming up, stretching or doing some kind of team bonding.”

Cariveau said game days often lasted from noon to anywhere between 9 and 10 p.m., making for some “really long days.”

But they did make some time to explore the Las Vegas strip.

“If we had extra time, we went to the strip and saw all the big buildings,” Langhi said. “It’s a lot different than down here in Marshall County. It was fun exploring and being a tourist.”

Another highlight of the trip was the bond PU5H formed with a fellow competitor in the Hurricanes team.

The teams played each other on the second day of the event and formed a mutual respect that turned into ongoing support.

“On Day 3, in the quarterfinals, they showed up early to come cheer us on, and we went and watched their championship game for a different bracket,” Cariveau said.

Goddard said the new friendships topped off what was already an incredible experience.

“The win was great, but making friends through the sport made it even better,” she said.

Up nextNext up for PU5H is this weekend’s Junior Volleyball Association World Challenge, which is a three-day event that began Friday in Louisville. And they’ll be facing a new challenge in playing at the premier level, which is a step up from club.

“I moved us up a division because of the success that we’ve had recently and trying to challenge the girls and help them get better,” Bret Cariveau said. “It’s not about winning — it’s about them getting better as players and learning to compete and fight.”

the players know they have what it takes to succeed.

“In Vegas, we beat multiple premier teams, and that showed us that we’re better than we think we are and that we need to push ourselves even more,” Goddard said. “We’re all extremely excited to see new teams and a new skill level.”

“We’re going in as the overall No. 8 seed, which is really good,” she said. “We’re really excited to see how we perform against nationally ranked teams.”

Goddard said winning in Vegas showed the girls of PU5H how good they really are, and she

fully expected her team to perform well in Louis-

“As a team, we see teams play and warm up, and we’re like, ‘Wow, they’re really good.’ And we forget that we’re really good,” she said. “We just traveled to Vegas and came home as national champions.”