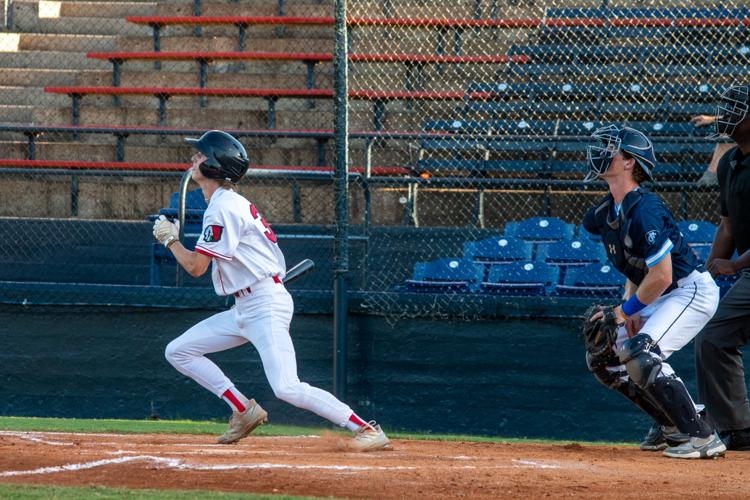 Lyon County native Gunnar Bingham rips a solo home run to right field in the first inning against the visiting Full Count Rhythm at Brooks Stadium. Bingham is the first Chief this season to hit a home run during a home game. 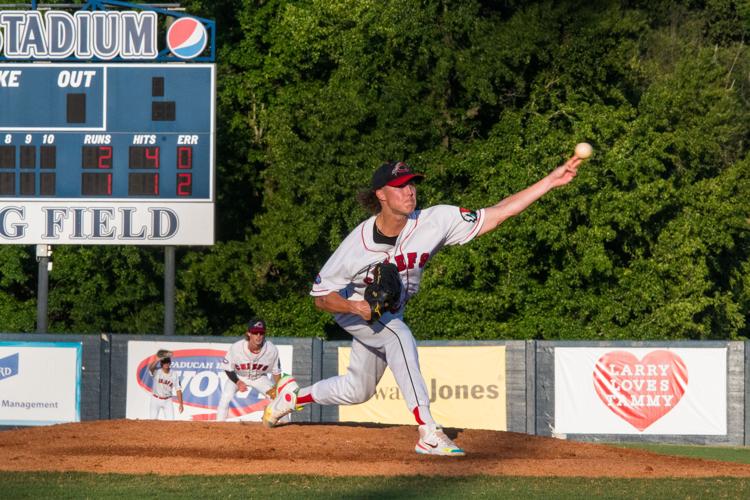 Lyon County native Gunnar Bingham rips a solo home run to right field in the first inning against the visiting Full Count Rhythm at Brooks Stadium. Bingham is the first Chief this season to hit a home run during a home game.

Despite falling 10-5 to the visiting Full Count Rhythm on Wednesday night at Brooks Stadium, the Paducah Chiefs fought hard and broke a home run curse that has plagued their bats all season at home.

Lyon County native Gunnar Bingham broke the curse at Brooks Stadium as the regular season winds down. Bingham’s solo shot to right field was the first Chief to hit a home run on their home field. However, his teammates greeted the future Murray State Racer as he touched home plate and cut Full County’s lead down to one run in the bottom of the first inning.

Kailen Hamson kept the Chiefs in the game for the first five innings while working the mound despite taking the loss. The Australian native allowed six hits, six runs, and four walks while striking out four on 99 pitches. However, the Chiefs began to falter once Hamson’s night ended.

The Chiefs kept a 5-4 lead over Full Count until the top of the sixth inning when Hayden Miller scored on a passed ball, allowing the Rhythm to tie it at 5-5. Full Count gained the lead as Ryan Miller sacrificed to right field, giving the go-ahead runner JJ Williams enough time to step on home plate. Paducah inched out of the inning as Henry Mosley grounded out with runners in scoring position.

Although the Chiefs were able to get runners on base in the next two innings, the Paducah club could not produce offensive support to take the lead back.

Things began to truly unravel for the Paducah club in the top of the ninth despite being down one run. Full Count’s Drew Lowery kicked off the inning with a double, then Hayden Miller hit a ground ball and reached on an error by the Chiefs. Then, with one out after Colin Hawkins struck out Williams, Tyler Boyd drew a walk to load the bases.

Henry Jackson singled on a line drive to left field, scoring Lowery and Hayden Miller. Boyd advanced to second base on the two-run RBI single to push the Rhythm’s lead to 8-5. The next batter, Levi Perrell, singled, scoring Boyd to make it 9-5.

Mosley singled to left field, scoring Jackson and giving his team a five-run lead. Despite the four-run inning, the Chiefs returned to their dugout as Franks grounded out to end the inning.

With two outs, Garrett Smith, Tucker Love, and Kyler Carmack were hit by pitches back-to-back to load the bases, and Bingham was due up.

Although Bingham went 2-for-5 with two RBI, the crafty lefty could not bring his team back in the game in the final inning.

Bingham’s line to second base ended the game, allowing Full Count to take home the victory.

Hawkins closed out the game for Paducah. He worked two innings, allowing four hits, four runs (two earned), and one walk while striking out four on 45 pitches.

The Paducah Chiefs will continue their home-stand on Thursday against the visiting Franklin Duelers.

The club hosts the Duelers on Friday night before the Fulton Railroaders and Hoptown Hoppers come to town to finish the Chiefs’ regular season games at Brooks Stadium.