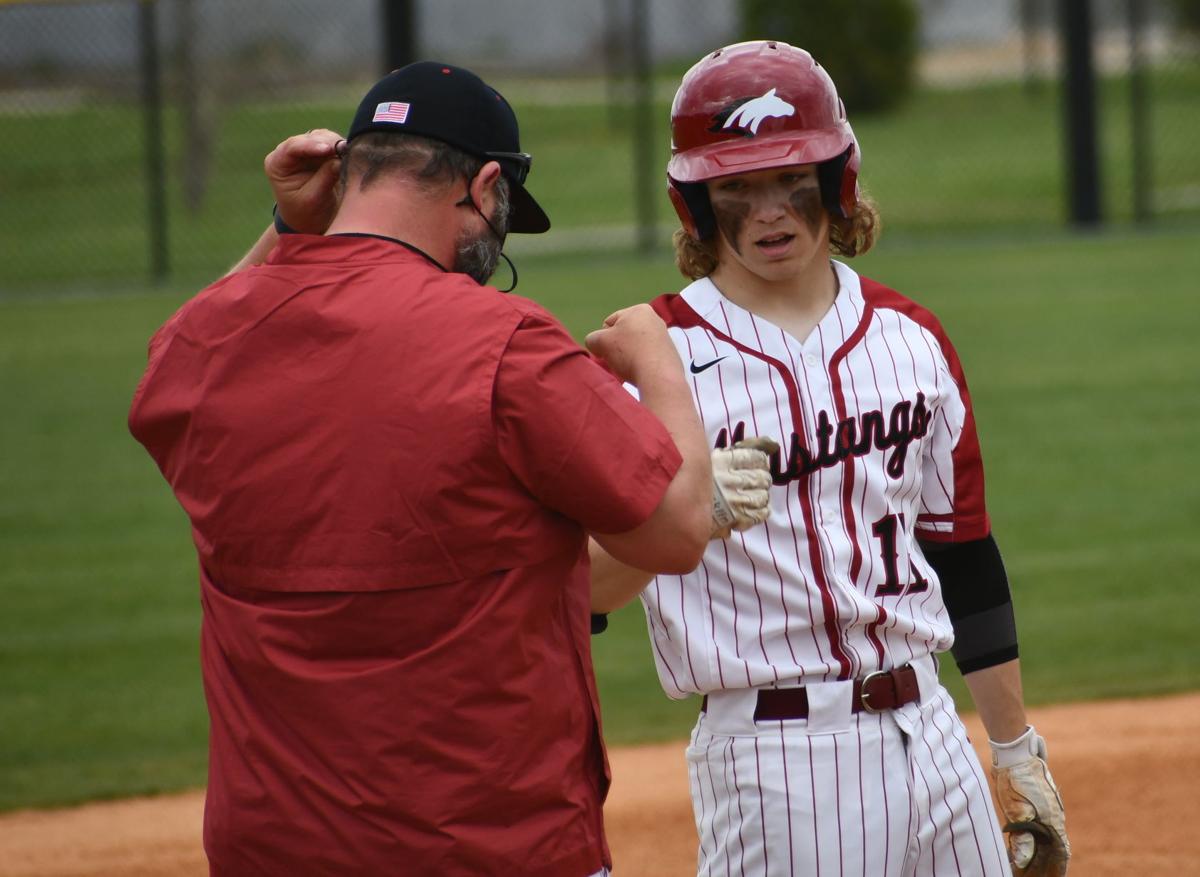 McCracken County sophomore Nate Lang gets a fist bump from head coach Zach Hobbs following his two-RBI triple in the first inning of Wednesday’s game against Russell County. The Mustangs finished with 11 hits in their 12-1 win. 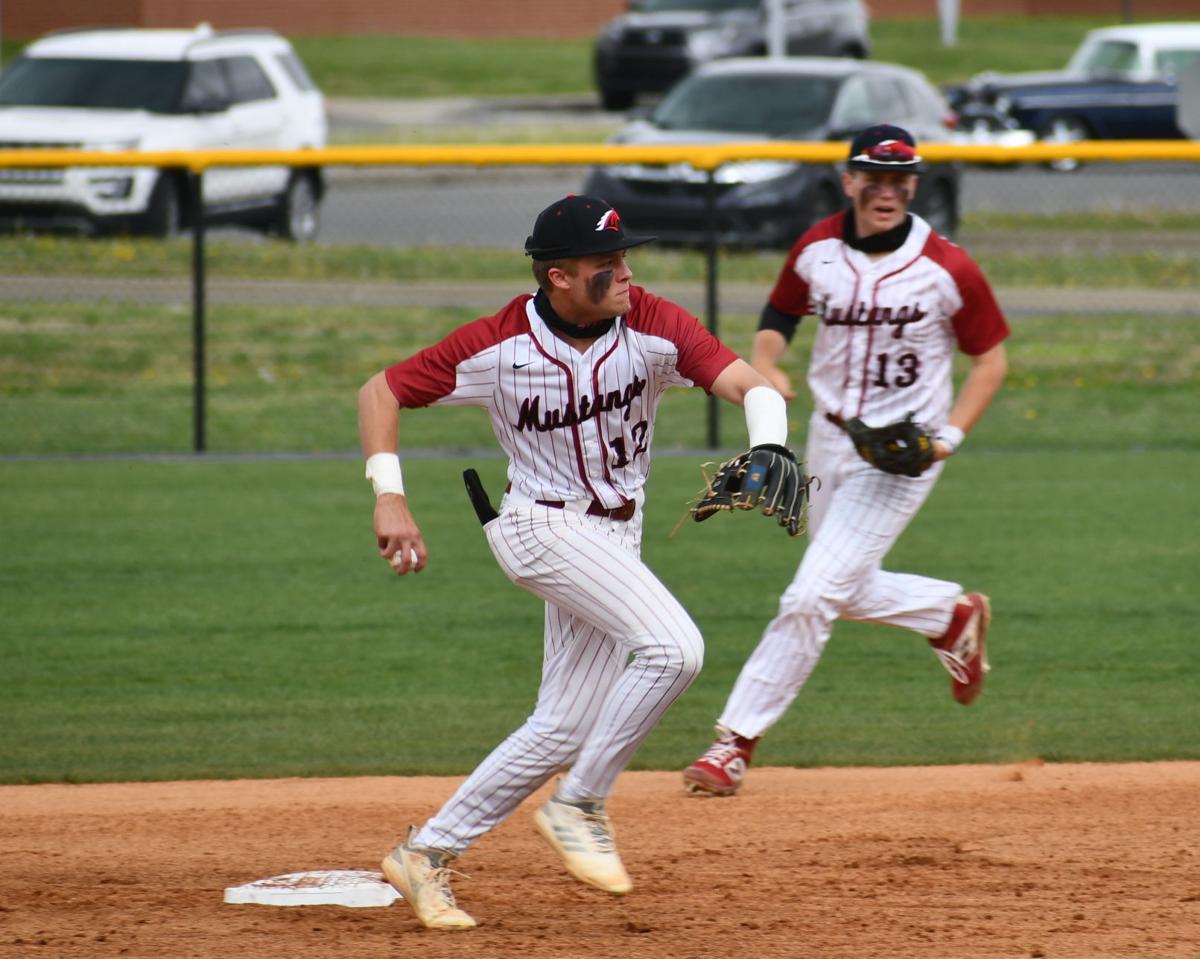 McCracken County junior shortstop Dylan Riley (12) lines up a throw to first base for an out during Wednesday’s game against Russell County.

McCracken County sophomore Nate Lang gets a fist bump from head coach Zach Hobbs following his two-RBI triple in the first inning of Wednesday’s game against Russell County. The Mustangs finished with 11 hits in their 12-1 win.

McCracken County junior shortstop Dylan Riley (12) lines up a throw to first base for an out during Wednesday’s game against Russell County.

The McCracken County baseball team’s dominant start to the 2021 season continued Wednesday afternoon with a 12-1 victory over visiting Russell County.

The Mustangs tallied 11 hits in the five-inning game while getting solid pitching from a trio of arms in getting their fourth run-rule victory of the season. Now at 5-0, they’ve won their games by a combined score of 57-5.

“We’re aggressive at the plate, and our pitching is doing a really good job of keeping us in games. We’re throwing strikes for the most part and keeping our pitch counts low. We haven’t had to extend anybody more than 65 to 70 pitches, so hopefully that will pay off later on in the season with keeping our arms fresh,” Mustangs head coach Zach Hobbs said of his team’s hot start to the season. “We have a lot to improve on, but for this time of year, we’re doing things pretty well.”

Hobbs didn’t have much to complain about on Wednesday save for the five walks surrendered by his pitching staff. Junior Jack Bennett got the start on the mound for the Mustangs in what was his first pitching appearance of the season. Over three innings and 65 pitches, he gave up one run on three hits and three walks while striking out four.

“Jack is a guy who will pitch a lot of quality innings for us and is going to do a really good job on the mound. But he was just trying to be a little too perfect today,” Hobbs said. “Instead of just pounding the strike zone, he was trying to nibble and get some swings-and-misses. We have to get some contact so we can extend him and let him go six or seven innings instead of three.”

Seniors Rivers Moffatt and Landen Jones each pitched an inning in relief with matching stat lines of no hits allowed along with one walk and one strikeout.

The Lakers (2-2) scored their lone run in the second inning after juniors Evan Hammond and Cody Luttrell walked and advanced to second and third on a passed ball.

Junior Gavin Gossage then hit into a fielder’s choice that scored Hammond, as the throw from the Mustang defense got Luttrell out at third base.

That run came after the Mustangs had already built a 5-0 lead in the first inning.

Senior Ben Higdon and Moffatt led off with a single and walk, respectively, and McCracken did the rest of its damage after Bennett and senior Grant Godwin struck out.

A walk to senior Brandon Dodd loaded the bases, and two runs scored on an error when a Laker outfielder was unable to corral a fly ball.

Sophomore Eli James followed with an RBI single, and sophomore Nate Lang added a two-RBI triple for the 5-0 edge.

McCracken added a run in the second inning via a sacrifice fly from Dodd and got three more in the third courtesy of a two-RBI triple from Higdon in which he came home to score when Laker third baseman Maxon Gosser was unable to control the ball when it was thrown in from the outfield.

The Mustangs closed out the scoring with a three-run fourth frame. Singles from Dodd and senior Braden Vinyard and a walk to Lang loaded the bases, and junior Dylan Riley and Higdon both drew RBI walks.

Batting for Moffatt, sophomore Davis Beale followed with an RBI sacrifice fly to put McCracken up 12-1.

“Offensively, I thought we had a good approach today,” Hobbs said. “We really work on being aggressive. We want to put pressure on people and run the bases, and our guys did that.”

Higdon (single, triple, walk, 3 RBIs, 2 runs), James (2 singles, RBI, 2 runs), Lang (triple, 2 RBIs, run) and Bennett (single, double) led the way for what was a balanced Mustang offense that got contributions from throughout the lineup.

“The thing I love about our offense right now is we have a lot of weapons,” Hobbs said. “Today our seven, eight and nine guys (James, Lang and Riley) did a lot, and our one, two and three guys (Higdon Moffatt and Bennett) can carry us. Everybody in our lineup can have a day, and that way, if somebody is off a little, we can pick each other up as a team.”