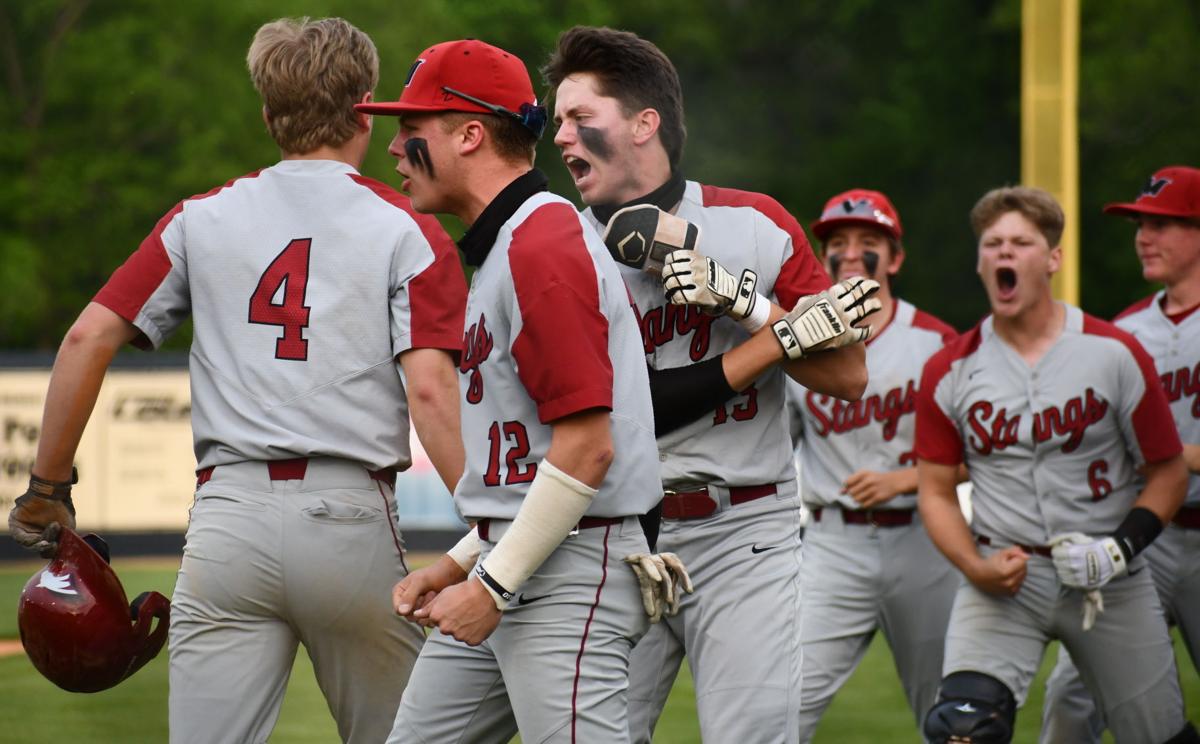 The McCracken County baseball team celebrates as Ben Higdon (4) returns to the dugout after scoring the first run of Tuesday’s game at Paducah Tilghman. The Mustangs went on to win, 8-4. 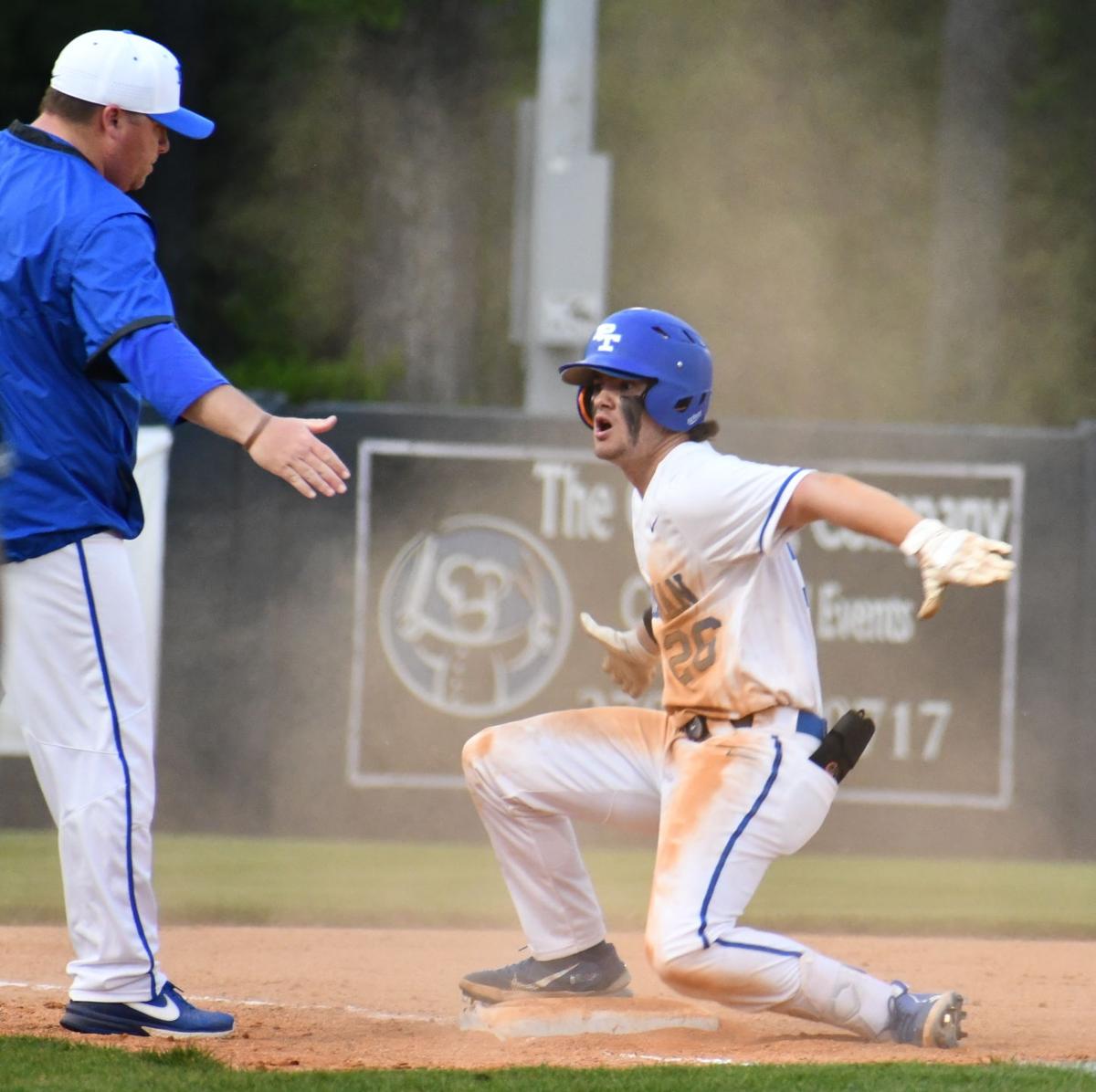 Paducah Tilghman’s John Kiebler celebrates after sliding into third base for a triple in the third inning of Tuesday’s game against McCracken County.

The McCracken County baseball team celebrates as Ben Higdon (4) returns to the dugout after scoring the first run of Tuesday’s game at Paducah Tilghman. The Mustangs went on to win, 8-4.

Paducah Tilghman’s John Kiebler celebrates after sliding into third base for a triple in the third inning of Tuesday’s game against McCracken County.

The McCracken County baseball team has a long history of success against in-county rival Paducah Tilghman. That success continued Tuesday at Brooks Stadium, as the Mustangs handed the Blue Tornado their first defeat of the season.

The Mustangs jumped out to an early 2-0 lead and finished with 12 hits while limiting Tilghman, fresh off a 2A state championship, to just three hits in an 8-4 victory. McCracken is now 20-1 all-time against the Blue Tornado.

“They won the 2A state championship, but that didn’t really matter to us. We just knew what we had to do — come in here and dominate the whole game. And I think that’s what we did,” McCracken senior Braden Vinyard said. “We work all offseason for this moment, and we came out here and did what we were supposed to do.”

“Tilghman is a very good baseball team. We were just trying to do what we do and be aggressive, and we thought we could compete with them,” he said. “It was so nice to have a good crowd, and we didn’t have to wear masks, so it finally felt normal, and we came out here and had some fun.”

Vinyard had a strong game at the plate, tying sophomore teammate Nate Lang for the team lead in hits with three. The senior had three singles and an RBI.

“I just focused on keeping my hands back and up and seeing the top of the ball and hitting line drives. Being comfortable at the plate is a big thing,” Vinyard said of his approach at the plate.

The Tornado (15-1) got a double from junior Gage Griggs, a triple from senior John Kiebler and a single from senior Zion LaGrone in what was a quiet night from their offense. Junior Jack Bennett got the pitching start for McCracken (12-4) and threw 31/3 innings, giving up one run on two hits and two walks while striking out two before being relieved by senior Josh Tucker.

Tucker entered the game with one out in the fourth inning and two runners on base but got out of the jam with two straight strikeouts.

“Tucker is guy we can put in the game in any situation. He’s a wiry little dude and likes to come in and throw,” Hobbs said. “He’s a bulldog, and that’s what you want in a guy like that in those situations.”

Tucker ran into some trouble in the seventh inning, loading the bases by giving up a single to LaGrone, a walk to sophomore Gunner Massey and hitting junior Devin Kiebler with a pitch. LaGrone scored on an RBI groundout from senior Leyton Patterson, and two more runs came home on a Tucker error when he overthrew first base, making the score 8-4. But Tucker ended the game by getting John Kiebler to fly out and striking out Griggs. Over 3 2/3 innings, Tucker allowed three runs (one earned) on one hit and one walk while striking out five.

“I’d put our pitching staff up there with anybody in the state,” Hobbs said. “We made some mistakes in the last inning. No. 27 (LaGrone) had a really good at-bat, and it was a really good piece of hitting. And then I think Tucker tried to get too fine and overthrew, and then he made that error — he said his hands were sweaty. That’s something that he doesn’t typically do.”

McCracken’s pitchers were able to work with the lead the entire game after plating a pair of runs in the top of the first inning via a Tilghman error and an RBI groundout from Godwin.

“You want to strike early in any game you play because it makes it a little easier since you can be a little more aggressive,” Hobbs said.

The Mustangs increased their lead to 3-0 in the third inning courtesy of the second of Tilghman’s four errors on the night. The Tornado cut the lead to 3-1 when John Kiebler scored on a passed ball in the bottom of the third.

An RBI double from James put McCracken up 4-1 in the fourth before a four-run fifth frame. All nine McCracken players got an at-bat in the fifth, which was highlighted by an RBI double from Lang and RBI singles from Bennett and Vinyard. The other run scored via a fielder’s choice off the bat of James.