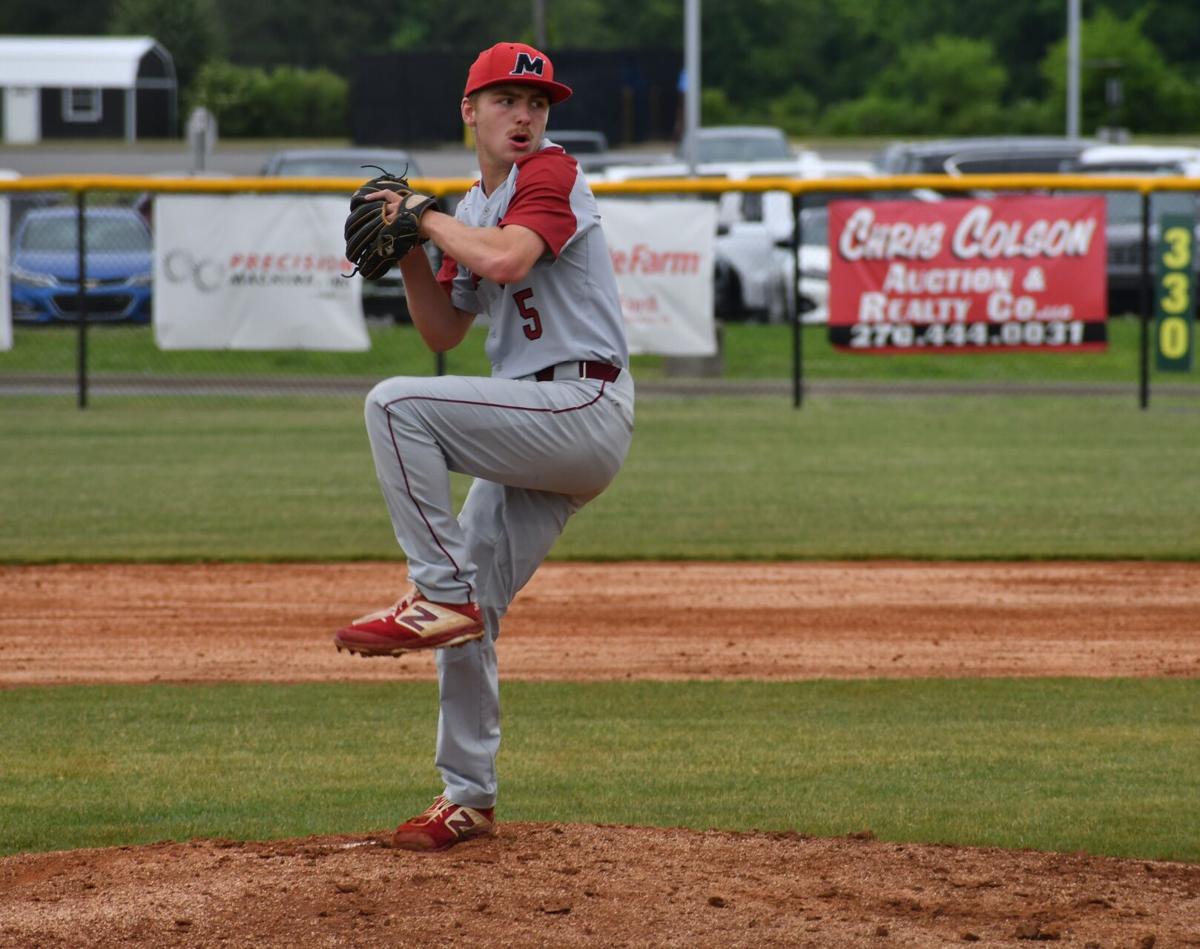 McCracken County's Josh Tucker winds up to pitch in the 10-3 win over Marshall County in Sunday night's region tournament semifinal game. Tucker went 6 2/3 innings and struck out six in his relief appearance. 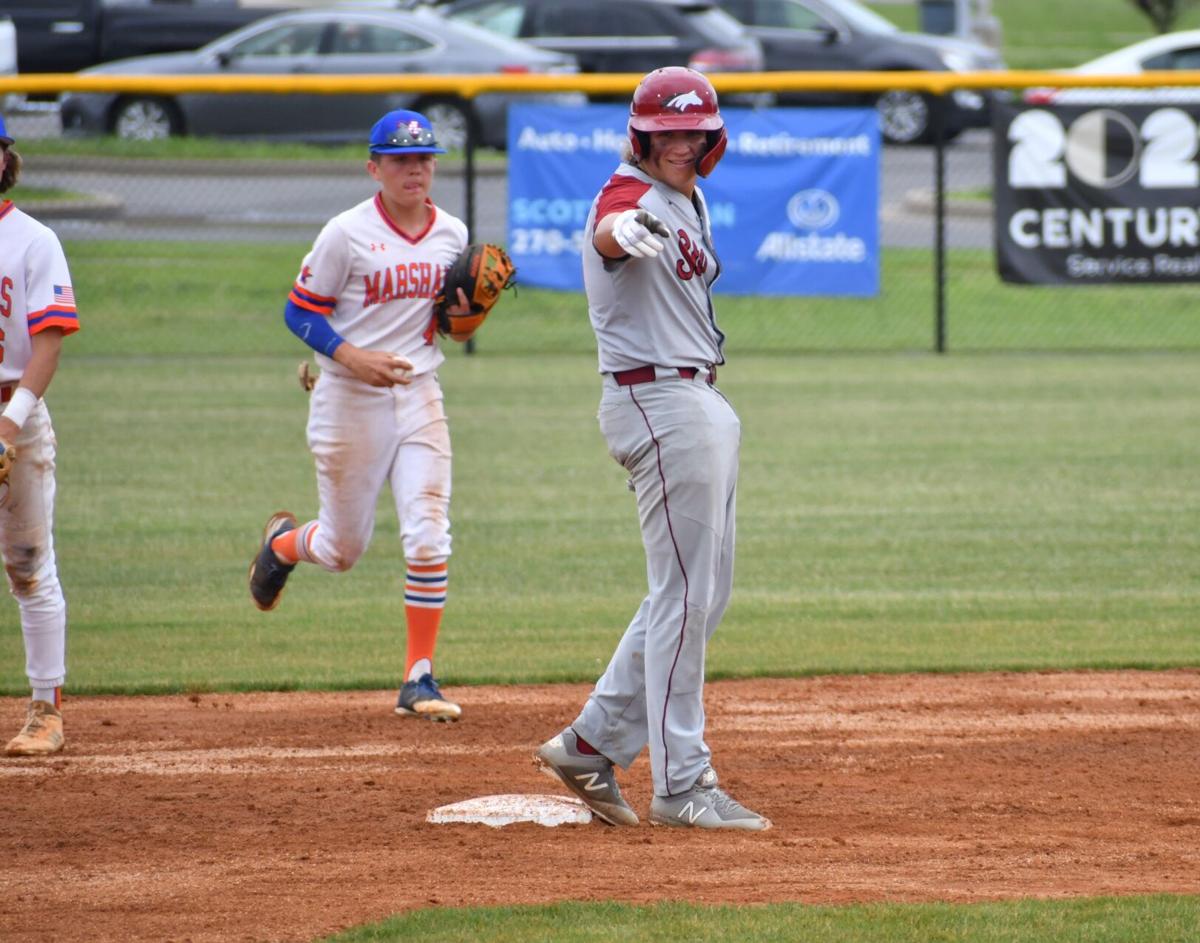 McCracken County's Eli James celebrates at second base after an RBI double in the top of the fifth inning. James went 3-for-4 at the plate with two doubles in the 10-3 win against Marshall County.

McCracken County's Josh Tucker winds up to pitch in the 10-3 win over Marshall County in Sunday night's region tournament semifinal game. Tucker went 6 2/3 innings and struck out six in his relief appearance.

McCracken County's Eli James celebrates at second base after an RBI double in the top of the fifth inning. James went 3-for-4 at the plate with two doubles in the 10-3 win against Marshall County.

It was a whole team effort for the McCracken County Mustangs to prepare Edward Jones Field for the semifinal round of the First Region Tournament on Sunday afternoon with a 10-3 win over Marshall County.

"Everybody in our program contributed to this win. The freshmen and sophomores that weren't in the game today," head coach Zach Hobbs said. "The amount of fieldwork they did today was amazing. Greg McKeel showed up as a hero with two pounds of conditioner and diamond dry. It saved the day to where we could get these games in."

Despite a lengthy rain delay, the story of the day would be McCracken County's Josh Tucker on the mound. Tucker appeared in relief of Ben Higdon in the first inning.

"Ben came out, and he struggled a little bit in the first inning, but I knew I needed to come in and throw strikes," Tucker said. "After that first inning, I knew I was on, and everything was going to work for me and go my way."

Earning the win, the senior hurler went 6 2/3 innings, allowing six hits and two runs while striking out six of the 27 batters faced in his appearance.

Backing Tucker was a powerhouse Mustang offense kicked off in the first inning with a double by Rivers Moffatt that scored courtesy runner Cooper Ford, who ran for Higdon.

Marshall County came back in the bottom half of the first inning by scoring one run on a bases-loaded walk by Higdon.

"It was a long day, and I'm proud of our guys. There were a lot of distractions that could have got us off track," Hobbs said. "With the work on the field that we had to do, waiting around, pulling the tarp and adding the game late yesterday. It was a team win."

The Mustangs would push the game to 8-1 in the top half of the second inning by plating six runs with assistance from two doubles hit by Eli James and Grant Godwin.

James doubled to left field in the top of the fifth that would miss clearing the wall by a few steps. On the hit, Cameron Willis would score McCracken's 10th and final run of the game.

James went 3-for-4 at the plate with two doubles.

Marshall County would tack on three runs in the final inning when Chase Shelton and Ty Davenport scored with two outs.

Higdon started the game for the Mustangs and went less than an inning, striking out one and walking four. The senior surrendered one run on no hits in his appearance.

Evan Oakley took the loss for Marshall County. Oakley lasted six innings, allowing nine hits and 10 runs while striking out two and walking one in his 108-pitch outing.

Parker Gibbs appeared in relief of Oakley. He threw one inning and gave up one hit while striking out one batter.