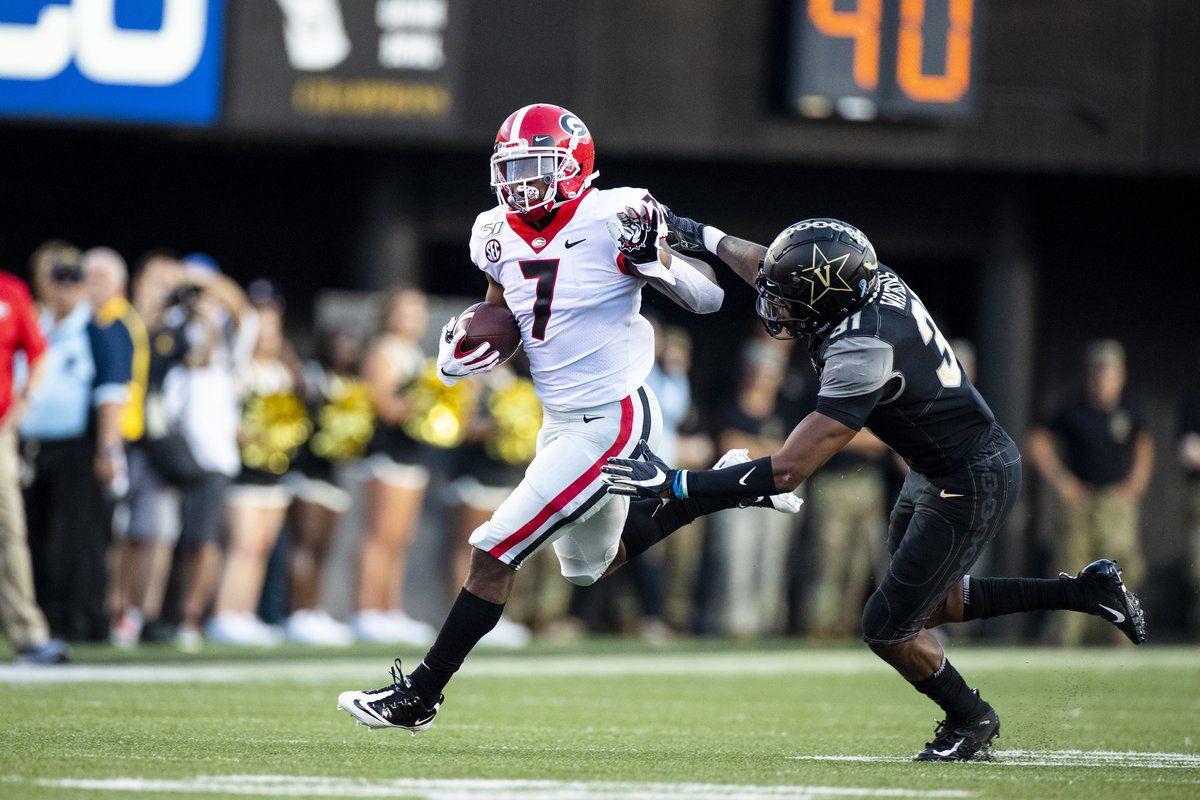 Georgia Bulldogs running back D'Andre Swift (left) fends off Vanderbilt Commodores defensive back Cam Watkins during the Aug. 31 matchup in Nashville, Tenn. Swift rushed for more than 140 yards in the 30-6 win. 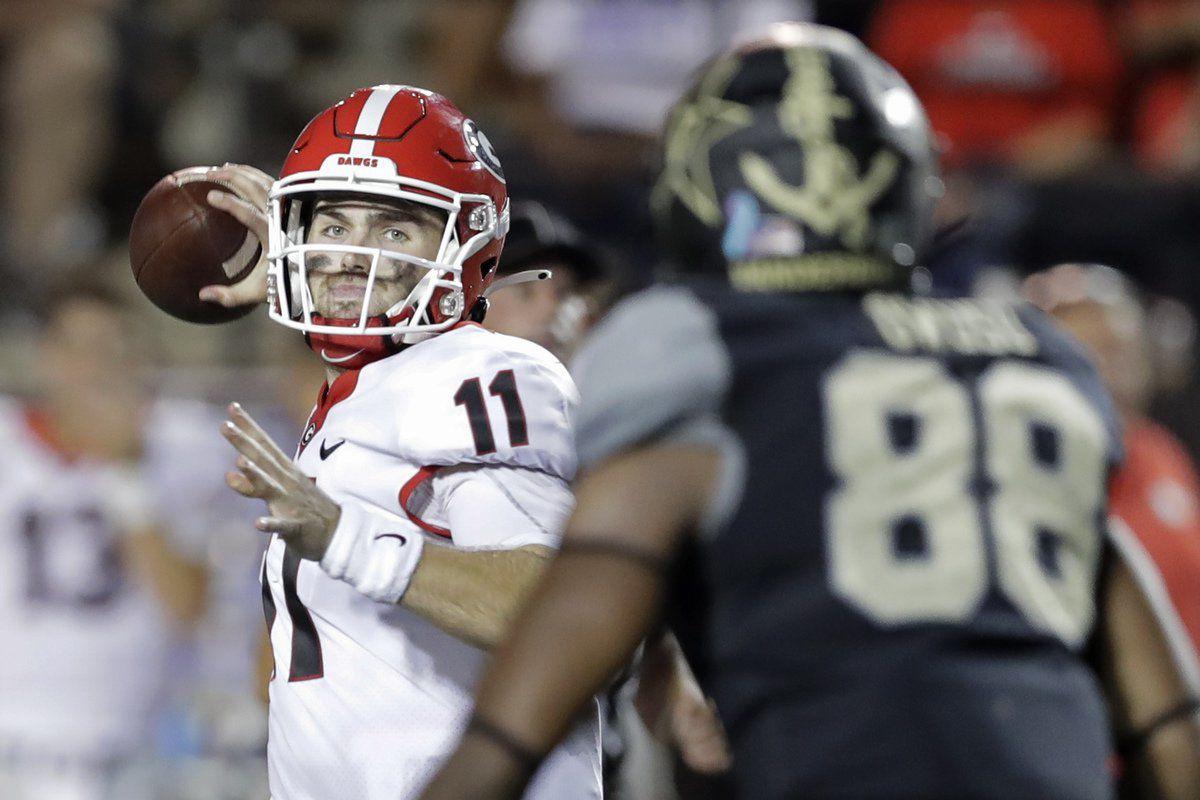 Georgia quarterback Jake Fromm (11) passes as he is pressured by Vanderbilt linebacker Michael Owusu (88) during the second half against Vanderbilt on Aug. 31 in Nashville, Tenn. Georgia won 30-6. Fromm and the Bulldogs take on the Racers in Saturday's home opener at Sanford Stadium in Athens, Georgia.

Georgia Bulldogs running back D'Andre Swift (left) fends off Vanderbilt Commodores defensive back Cam Watkins during the Aug. 31 matchup in Nashville, Tenn. Swift rushed for more than 140 yards in the 30-6 win.

Georgia quarterback Jake Fromm (11) passes as he is pressured by Vanderbilt linebacker Michael Owusu (88) during the second half against Vanderbilt on Aug. 31 in Nashville, Tenn. Georgia won 30-6. Fromm and the Bulldogs take on the Racers in Saturday's home opener at Sanford Stadium in Athens, Georgia.

MURRAY -- A 90,000-plus crowd. The strong, accurate arm of quarterback Jake Fromm. The quick twitch of running back D'Andre Swift. A devastating defense. A No. 3 ranking in the FBS Playoff Standings. A well-respected defensive guru in Coach Kirby Smart.

Yes, Murray State's next opponent -- the Georgia Bulldogs -- pack quite a punch, with the Racers clearly outmatched in every category when the two teams measure up at 3 p.m. Saturday in Athens, Georgia's Sanford Stadium.

So the Racers' plan is an uncomplicated one. Attack. Play football. Leave the effort unquestioned. And the rest will take care of itself.

This was the message from MSU coach Mitch Stewart to his team earlier this week.

"Say you've got a boxing match," he described. "The winner of that boxing match is always bloody. He's always got cuts on his face, just as much. You really can't tell if he's the winner or loser until you see the other guy.

"We've got to go into understanding that we're going to be put into some uncomfortable situations. There's going to be a lot of times where we're going to feel like we just stuck our head in a hornet's nest, and things are moving very, very fast.

The Racers spent this past week of practice dealing with uncomfortable situations: silent snap counts to combat crowd noise, shortened kickoff returns to simulate SEC speed, wideouts and defensive backs running similar defensive routes. All in the name of preparing for a harder, better, faster, stronger squad at every single position.

Will this result in any success for the Racers? Stewart won't know until he and his staff review the film on Sunday afternoon.

But Georgia absolutely had its way with the Vanderbilt Commodores last week in Nashville, Tennessee. Fromm was an efficient 15-for-23 for 156 yards passing, one touchdown and no turnovers. Swift rushed for 147 yards on just 16 carries, while Brian Herrien added 65 yards and a touchdown on 12 carries. Vanderbilt was held to 225 total yards, two field goals and a 3-for-14 third-down conversion rate.

Anything similar, or perhaps better, could be a small silver lining for MSU.

"Once you come in on Sunday, it's cool to see how many of your guys had success," Stewart said. "How many clips that you can pull up there in the team meeting room and say, 'Hey, look at this guy. Look at the effort this guy is playing at.'

UGA coach Kirby Smart is going to be familiar with some of Murray State's wrinkles coming into Saturday for a couple of reasons.

No. 1, his team spent 50% of Tuesday's practice prepping for the Racers' offensive scheme. But No. 2, Smart has a small branch in Stewart's coaching tree, when he served underneath Chris Hatcher and his famed "Hatch-Attack" Air Raid offense as defensive backs coach and defensive coordinator at Valdosta State during the 2001-02 seasons.

"They're 'Air Raid' type," Smart said of the Racers. "They'll spread you out and throw the ball around. Mitch has got a history with Coach Hatcher. They throw the ball around, spread it out with a lot of screens. Intermediate passing game. They get the ball out quick. They run the ball really well for what you think they would do. Everybody says they throw the ball on every snap, but they've got large splits … which make it tough to play the gaps. They make you defend the entire field, and they do a good job defensively, too. They really dominated last (week)."

Murray State at No. 3 Georgia

TO Diff. plus-3 even