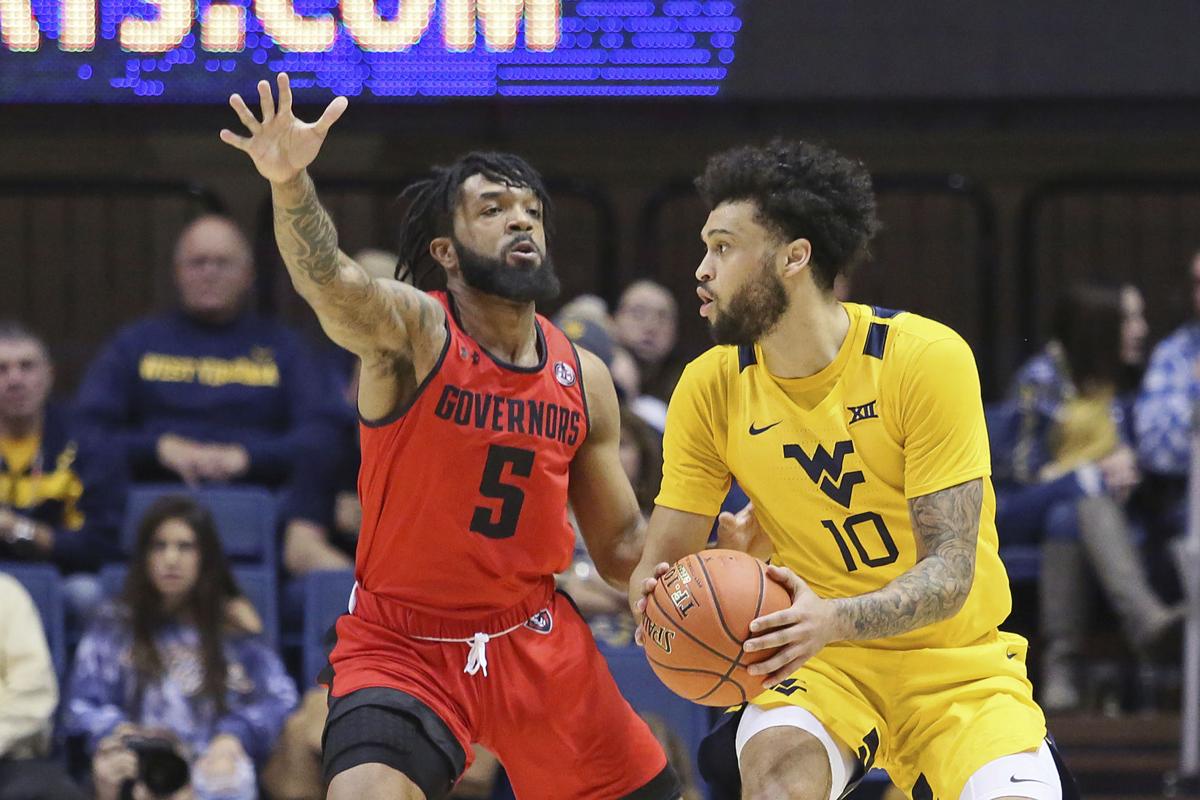 West Virginia guard Jermaine Haley (10) is defended by Austin Peay guard Jordyn Adams (5) as he goes to pass during the first half of an NCAA college basketball game Thursday, Dec. 12, 2019, in Morgantown, W.Va. (AP Photo/Kathleen Batten) 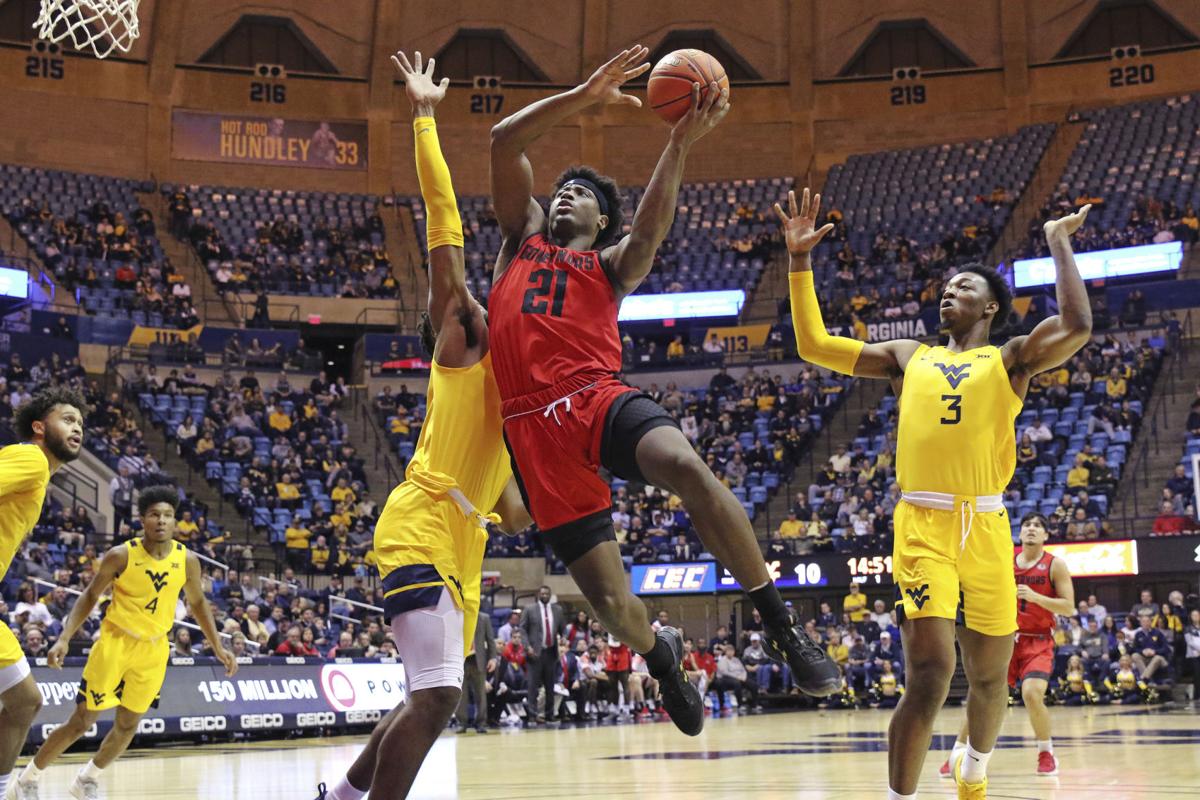 West Virginia guard Jermaine Haley (10) is defended by Austin Peay guard Jordyn Adams (5) as he goes to pass during the first half of an NCAA college basketball game Thursday, Dec. 12, 2019, in Morgantown, W.Va. (AP Photo/Kathleen Batten)

After a minus-13 start last Thursday against Belmont, and a minus-9 start last Saturday against Tennessee State, the Murray State Racers are looking for better beginnings against league opponents.

Two key chapters in a book on basketball offensive efficiency? Shot quality and turnovers, both of which were key issues in the first five minutes against both the Bruins and the Tigers.

By early Sunday morning, fifth-year MSU coach Matt McMahon could look back at two box scores and see a combined 38 turnovers committed, 39 points surrendered on those mistakes, but a rebound in shooting struggles -- as the Racers went for 39.3% at the Curb Center against Belmont, but shot for 48.1% at the Gentry Center against Tennessee State.

"We work on it every day," McMahon said. "Simple fundamentals. We've really prided ourselves for a long time here on our player development program. And that runs season-long, year-round, trying to get better individually. Make better decisions.

"As a coach, it's my responsibility to put our players in some better positions to where we're not turning the ball over as much. I think it falls on our coaching staff and my hands as much as anyone's. But I'm very confident in our players. I don't want them sitting around thinking about every turnover. I want them to play with great confidence and belief in each other. I'm not going to overanalyze it. We all know it's an area we have to make improvement if we want to win games in February and March."

In other words, McMahon doesn't want his rotation paralyzed by the moment. Nor does he want the fault to fall on one particular person, or practicum.

"It has nothing to do with who started and who came off the bench," he added. "(Those) runs covered our top nine players, that were in the game at different points in our rotation. Bottom line, we've got to play better. We've got to get off to better starts -- especially at the offensive end of the floor. Defense hasn't been bad. It's been more the offensive issues starting the games. Not getting high-quality shots, and turning the ball over too much. It's really that simple."

If he had a choice -- bad shot, or turnover -- McMahon laughed.

After opening its 2020 much like the Racers did -- a 10-0 start to Ohio Valley Conference play -- Austin Peay fell at both Tennessee State and Belmont last week, and now trails a game behind MSU for the coveted regular-season championship and No. 1 tournament seed.

And with six games to go, it means nothing. The Governors (16-9, 10-2), like the Racers, still control their destiny. As do Belmont and Eastern Kentucky, which are both 9-3 in the OVC.

APSU doesn't have anyone else in double figures, but freshman point guard and Venezuelan native Carlos Paez owns a 3-to-1 assist-to-turnover ratio and is shooting 38% from the arc (25-for-66). Add on sophomore guard Antwuan Butler (7.3 ppg, 80 assists) and redshirt guard/forward Eli Abaev (6.8 ppg, 6.6 ppg), and suddenly, the Govs' starting five looks pretty potent.

"This weekend changes nothing about Austin Peay," McMahon warned. "Winning on the road is tough. Winning on the road against good teams is really difficult. They've got a great team. Terry Taylor is not just one of the best players in our league, but in all of college basketball. Period. His production speaks to that, and he's done it for three years now. He presents a lot of problems, because he can score it in so many ways. And he's so good on the offensive glass.

"I think you look at the addition of Jordyn Adams -- the talented freshman from Texas -- and he can really score the ball. Can create his own shot, and they run good offense to get him good shots. They're the No. 1 offensive and defensive rebounding team in our league. Second in the league in forced turnovers. No. 1 in scoring efficiency. They're balanced. Present problems on both ends of the court."

It's also worth noting that Austin Peay is an unblemished 11-0 at home this season, serving as a cherry on top of Murray State's last three games on the road.

"In my decade or so of being here … I can't recall three more difficult back-to-back-to-back road games in an eight-day period," McMahon said. "Going into it, the three teams (Belmont, Tennessee State, Austin Peay) were a combined 27-2 at home. So, we know that this will the game that the fans will show up for there in Clarksville. We know it will be a great atmosphere. We all know the history of the great rivalry. It'll be a fun opportunity. It's one of those games -- whether you're at Austin Peay or Murray State -- as a kid, you grow up wanting to play in games like this. In this kind of environment."