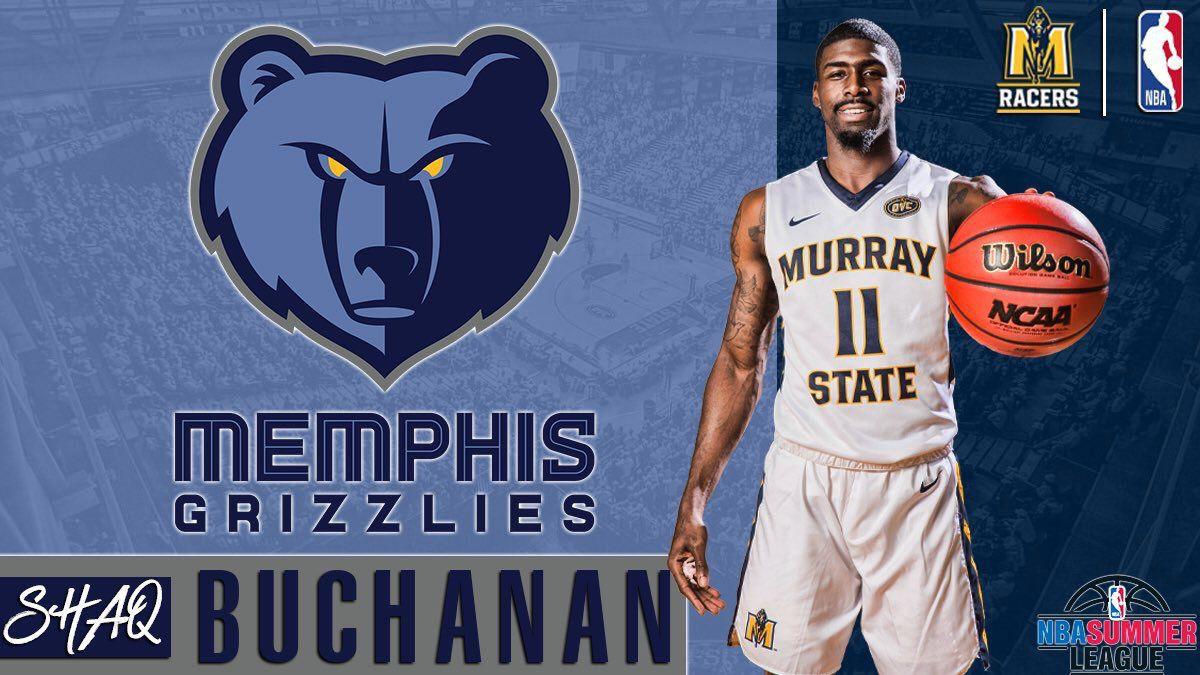 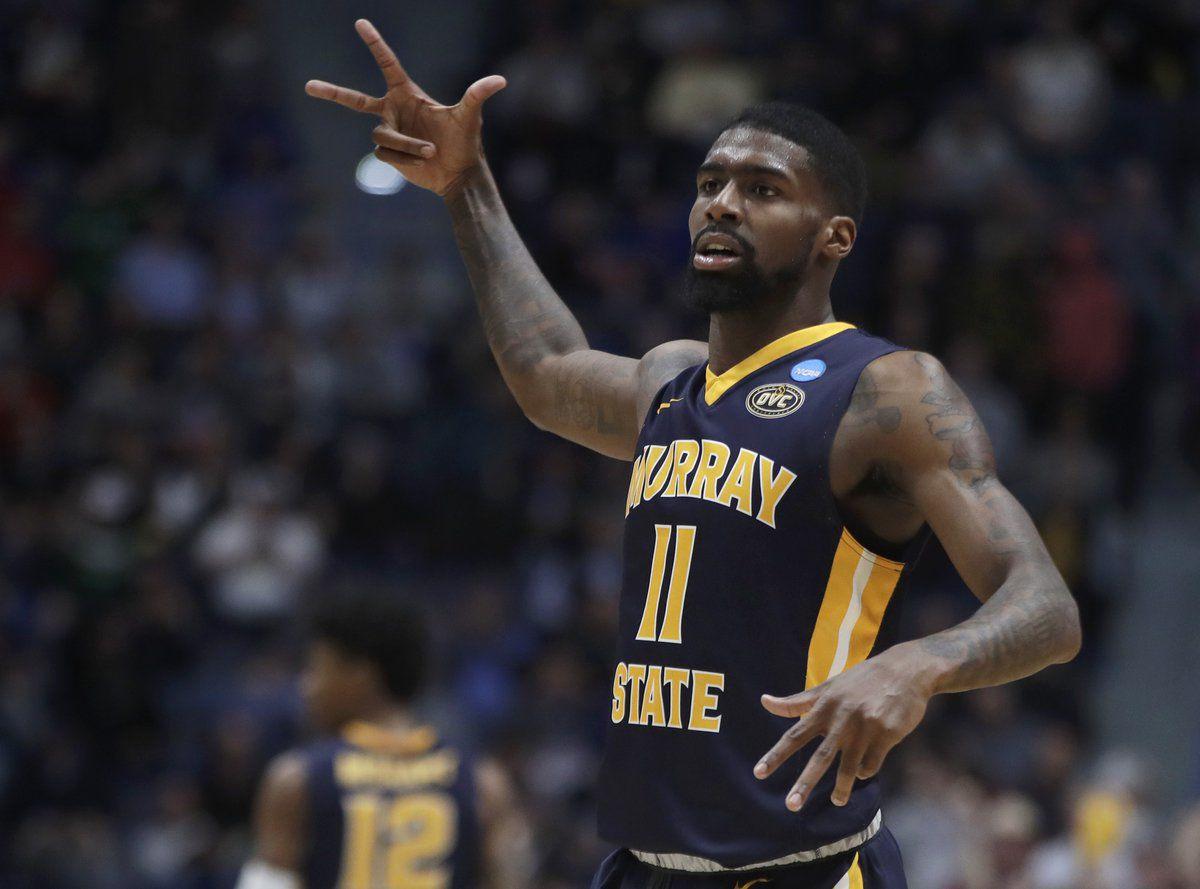 Murray State's Shaq Buchanan gestures after making a basket against Marquette in the NCAA Tournament on March 21 in Hartford, Conn. Saturday morning, Buchanan and Racer officials announced the two-year starter and reigning OVC Defensive Player of the Year would be playing for the Memphis Grizzlies in the 2019 NBA Summer League.

Murray State's Shaq Buchanan gestures after making a basket against Marquette in the NCAA Tournament on March 21 in Hartford, Conn. Saturday morning, Buchanan and Racer officials announced the two-year starter and reigning OVC Defensive Player of the Year would be playing for the Memphis Grizzlies in the 2019 NBA Summer League.

Since graduating from Murray State University this past spring, two-year men's basketball starter Shaq Buchanan has been busy.

Working with a trainer in Houston, the reigning Ohio Valley Conference Defensive Player of the Year spent the two weeks prior to the 2019 NBA Draft hopping flights -- first to Memphis for some work with the Grizzlies, then to the West Coast for clinics with the Sacramento Kings and Los Angeles Clippers, before bouncing back all the way east to meet with the Brooklyn Nets.

On Saturday morning, two days after the draft, the hustle paid off, when Buchanan announced he'd be spending the 2019 NBA Summer League with none other than Memphis -- the very team that took Murray State's Ja Morant No. 2 overall.

"It's just a step closer to getting to the next level," Buchanan noted earlier this week. "Play Summer League. Treat it as if it's a real season. Take advantage of the moment.

"It's been my goal since I was growing up, and that was the main reason picking Murray State. They produce pros, even if they're going overseas or to the NBA. I knew the coaching staff would put me in the state and condition to get there, and it turned out to be great. I'm working on living my dream."

During the 2018-19 season, he was named the league's top defender after collecting 60 steals and 18 blocks, and offensively he was just one of four players in the country to attempt 40 dunks with 125 3-pointers.

In a couple of workouts, Buchanan said he was compared to -- at least defensively -- a young Tony Allen. A humbling comparison, since the 6-foot-4 former lockdown star was named to the NBA's All-Defensive Team six times, won an NBA Championship with the Boston Celtics in 2008 and became the league's top perimeter defender during his seven-year tenure with the Memphis Grizzlies.

Buchanan is a little smaller than Allen, though, at 6-3 and 190 pounds, and as such has had to work more at the point guard position in most of his NBA workouts. "I've really just been working on the point guard spot, with me playing off the ball a lot in my college career," Buchanan said. "Been getting used to playing the ball up-and-down the court with teams, and making the right plays.

"With my height, I'd have to play the one a lot more. They've just wanted to see how I'd handle the ball."

Luckily for Buchanan, he's spent the past two seasons at Murray State operating alongside two of the program's more lauded point guards in former OVC Player of the Year Jonathan Stark (still with the G-League Iowa Wolves) and Morant.

In fact, Buchanan has stayed in strong contact with Stark, who spent this time last year making the same trips and enduring the same processes before locking in with the Minnesota Timberwolves organization.

"He's a guy that I talk to mostly every day," Buchanan said of Stark. "He's helped me through this journey, because he's been through it ... top to bottom. He's a great person to learn from, and I'm just taking everything he's giving me and taking advantage of it."

Buchanan knows he's got to continue to work on his shot, particularly from range and at the charity stripe.

But it's his knockdown 15-footer -- a deadly shot -- and an improved floater that he's hoping helps get him some meaningful minutes.

That, and some basketball IQ from guys like Stark and Morant.

"(I'm) improving my ball handling, and controlling the pace of the game at the point guard spot," Buchanan added. "I'm just taking high-basketball IQ at the point guard spot. Getting guys in the right spot. Setting them up in the spots where they can score and get easy buckets. Just create my own off the dribble."

The Memphis Grizzlies will tip-off their summer league schedule against the Indiana Pacers at 6 p.m. (all times Central) on Saturday, July 6, at the Cox Pavilion in Las Vegas. The game will be broadcast on NBA TV.

The event opens with all 32 teams playing four preliminary games each. The top eight teams then are seeded in a tournament, which culminates with a championship game at 8 p.m. July 15 on ESPN2. Teams that do not qualify for the tournament will each play a consolation game. Every team will play at least five games and as many as seven at MGM Resorts NBA Summer League.

Information from Memphis Grizzlies Public Relations contributed to this report.