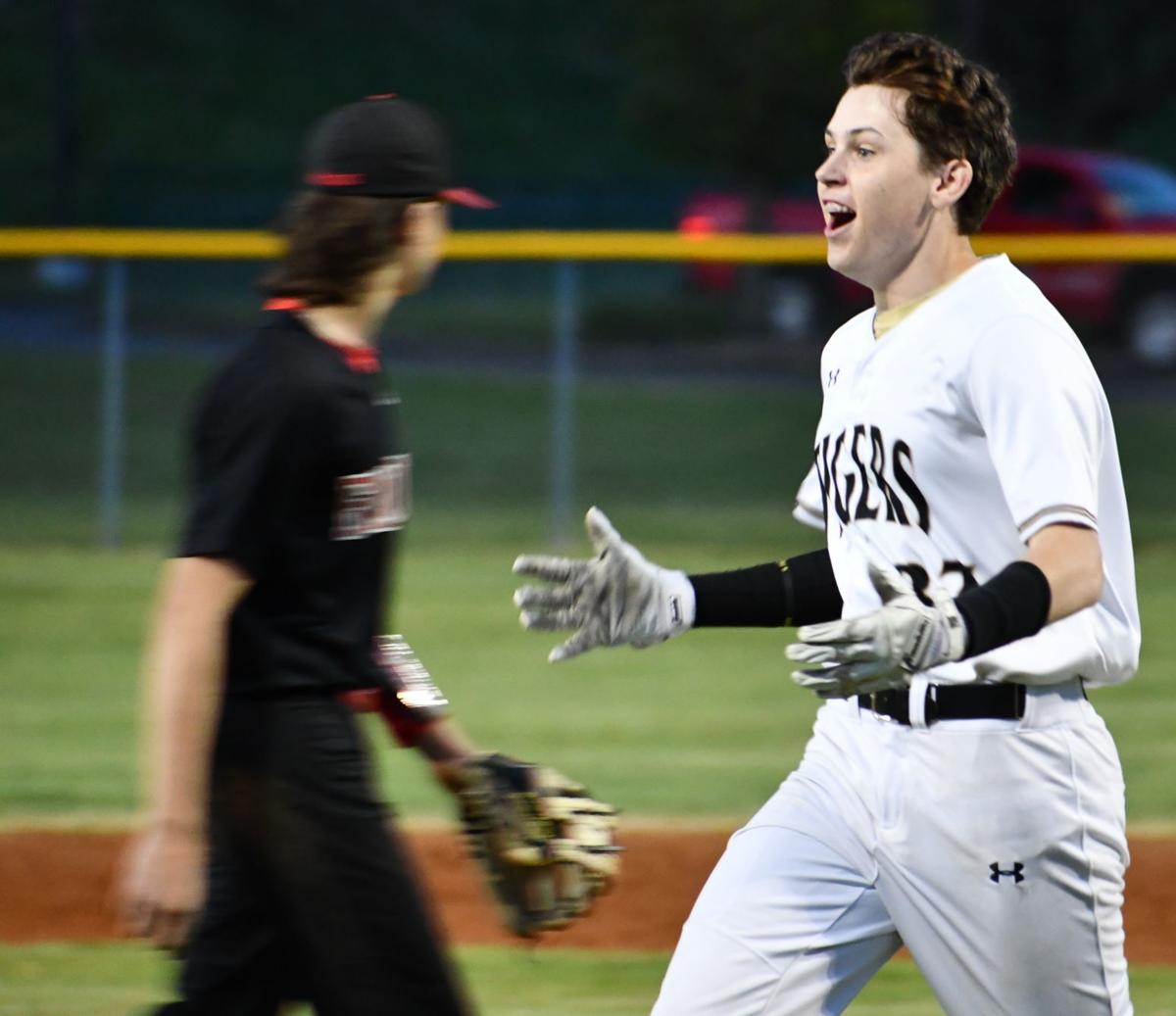 Murray senior Austin Miller runs to celebrate with his teammates after hitting the walk-off single that gave the Tigers a 5-4 victory over Hickman County in Wednesday’s All “A” First Region semifinals at St. Mary High School. 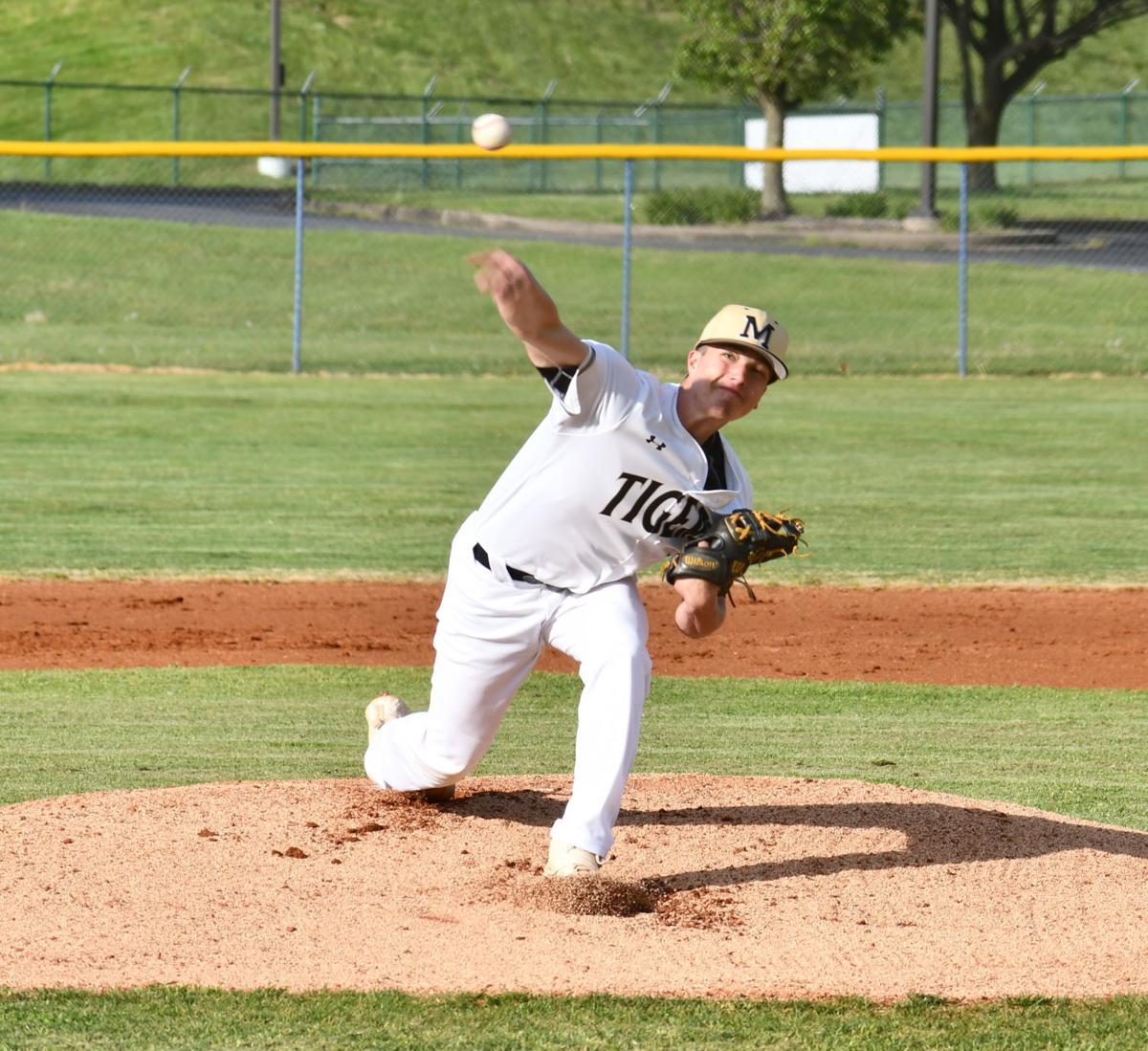 Murray senior Austin Miller runs to celebrate with his teammates after hitting the walk-off single that gave the Tigers a 5-4 victory over Hickman County in Wednesday’s All “A” First Region semifinals at St. Mary High School.

In need of a hit to avoid going to extra innings Wednesday against Hickman County, the Murray baseball team turned to senior Austin Miller. He delivered.

“I was 0-for-3 going into that at-bat, and they threw me a lot of curveballs,” Miller said of his mindset in his final at-bat. “I think I got two fastballs in the game, and they were barely in the zone, and in that last at-bat, I wanted to adjust and hit something in the outfield, and I was ready for the curveball to drive it.”

With the score tied and runners on second and third, Miller connected on a pitch from Hickman senior Eli Ambruster, sending the ball into right field to bring home the winning run in the 5-4 victory.

“It was more exciting than when I hit a home run,” Miller said of his walk-off hit. “It was a great team moment. I’m so proud of my team — everybody played a heck of a game.”

Tigers head coach Sam Rushing said he couldn’t have picked a more deserving player to have such an exciting moment.

“I get emotional thinking about it because that kid has worked so hard it’s unbelievable,” Rushing said, his voice cracking. “He’s gone through a total body transformation in the last year, and he’s put in so much effort to be that player in that spot. So it’s so rewarding to see him get that opportunity and to come through for us.”

Miller had a strikeout and a pair of flyouts to his name prior to his seventh-inning at-bat, but he was ready to deliver after freshman Carson Tucker drew a leadoff walk and junior Nick Holcomb bunted and reached on a Hickman error.

The Falcons hadn’t committed an error all game long up to that point, and that miscue proved costly, as it allowed the runners to advance to second and third.

Senior Nathan Rogers struck out, but Miller was next in line and came through in the clutch.

On the field at St. Mary High School, Miller was mobbed by his teammates in celebration after Tucker crossed home plate to score the game-winning run.

It was an important win for the Tigers (5-5), as it advanced them to the All “A” Tournament’s First Region championship game.

“After a year of not playing baseball and a year of working with not being able to see any reward for it, it feels really good to go out and play for something,” Rushing said. “For small schools, this (All ‘A’ Tournament) means a lot. We know how much this means to our school and our community and our fans, so we’re ready to play for it (the region championship).”

The Tigers left St. Mary a jubilant group, but they weren’t far removed from blowing a 4-1 lead.

Trailing by three, Hickman (5-3) rallied in the top of the sixth inning after senior Kaleb Harper led off by reaching on an error.

Rushing then changed pitchers, going from senior Kade Gibson to Tucker, and the latter proceeded to walk the next two batters.

Gibson had a solid night on the mound, allowing two unearned runs on three hits and two walks to go with seven strikeouts.

But with his pitch count at 91, the plan was in place to make a change, Rushing said.

Tucker ended up throwing 30 pitches in his one inning of work, and the coach was proud of how his team bounced back after giving up the lead.

“The only thing we’ve been talking about the last month is playing through adversity,” he said. “We finally got some adversity, and it’s cool to seem them do really well in a big moment like that.”

The Tigers got the final out in the top of the sixth by tagging Gallimore on a rundown between second and third.

Holcomb pitched a clean seventh inning on 10 pitches to give the Tigers a chance to win the game in regulation.

No batter had more than one hit for Hickman while Midyett had a team-high two RBIs.

Junior Micah Naranjo got the pitching start for Hickman and allowed two runs on four hits and one walk while striking out seven over four innings.