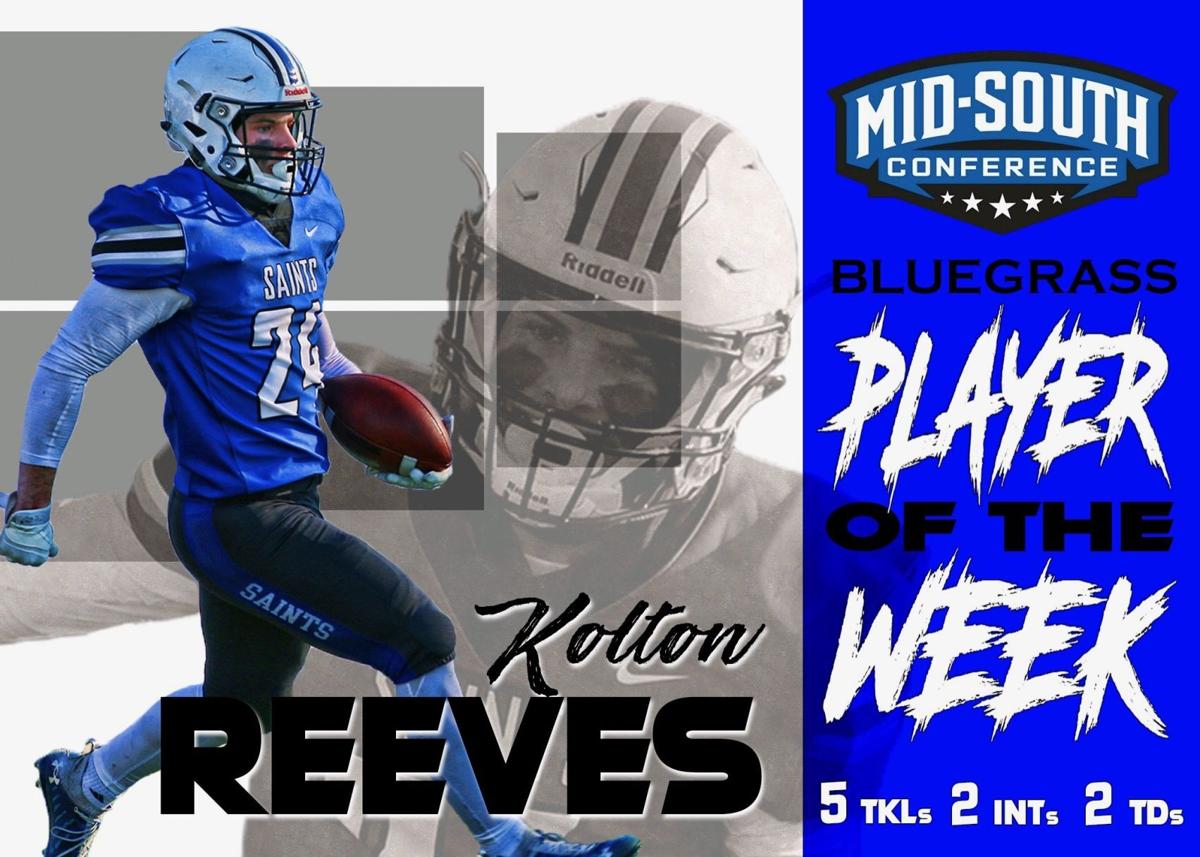 In the Saints’ second game of the season Feb. 20 against Campbellsville, freshman defensive back Kolton Reeves put up a performance that earned him both NAIA Defensive Player of the Week and Mid-South Bluegrass Division Football Player of the Week honors. Led by a pair of interception returns for touchdowns covering 117 yards, the Paducah native’s stat line also included five tackles and a fumble recovery in Thomas More’s 48-27 victory. With the 117 return yards, Reeves broke a school record that had stood since 2000, when Eric Fette had 100 return yards.

The NAIA Player of the Week is the first for the Thomas More football program since rejoining the NAIA in the summer of 2019, and Reeves was proud to earn the distinction so early in his collegiate career.

“It’s a nice accomplishment to have, especially as a freshman,” he told The Sun during a phone interview on Wednesday. “It’s nice to get that exposure not only for myself but also for the McCracken area.”

Reeves put up a stat line worthy of the recognition he received, but the game wasn’t all rosy for the freshman.

“I started the game off a little rocky. They (Campbellsville) busted a play on me on the first play of the game that I messed up on,” he said. “But my teammates tried to get me focused up. They were like, ‘Hey man, you’re better than that.’ And in the second half, things started clicking. Teammates were making blocks when I made the interceptions, and it just worked out.”

Reeves described his two pick-sixes as a “thrill.”

“Just to get an interception, you feel good about yourself. And as soon as you get it, it’s like, “I’m trying to take it to the end zone,’ ” he said. “I was booking it to the end zone, and when I finally got there, I was like, ‘Yes!’ ”

The 6-foot, 190-pound Reeves is making the most of his opportunity in being named a starter as a true freshman. Going in, he didn’t expect to earn a starting spot, and he credits his teammates with helping him succeed so early on.

“I’ve got some of the greatest teammates I’ve ever had,” he said. “They make it a lot easier for me to go out and perform.”

“Coach Clark’s practices mimic a college practice, so everything we did prepared me for college,” he said. “I’m not going to say I had an advantage over other kids, but I felt like I was better prepared just going through our practices in high school.”

With the COVID-19 pandemic moving the football season to the late winter and early spring, the Saints used the fall for prep work.

“We just started lifting that whole semester trying to get built for the upcoming season,” Reeves said.

The Saints got out to a 2-0 start this year with wins over Cumberland (Tenn.) and Campbellsville. Reeves said it’s a slight adjustment starting the season out in cold weather, but he’s grown to like it.

“In our last game, we had a wall of snow around the field, so it’s different,” he said. “Usually you want to play in the snow at the end of the season at championship time. So it’s a little different starting out in the cold and working your way to the hotter days. But I kind of like it, to be honest.”

If last Saturday’s performance is any indication, Reeves is adjusting to college football just fine. He’s enjoyed playing for the Saints thus far and encourages others to follow in his footsteps.

“If you’re a high school kid looking for a spot, Thomas More is the place to be,” he said.

Kolton is the son of Kim and Chris Reeves, and he has two younger siblings, Klayton and Kash. In his senior year at McCracken County High School, he was named a team captain and earned All Purchase team and All West Kentucky Conference honors. He holds the single-season record for tackles at MCHS with 104.