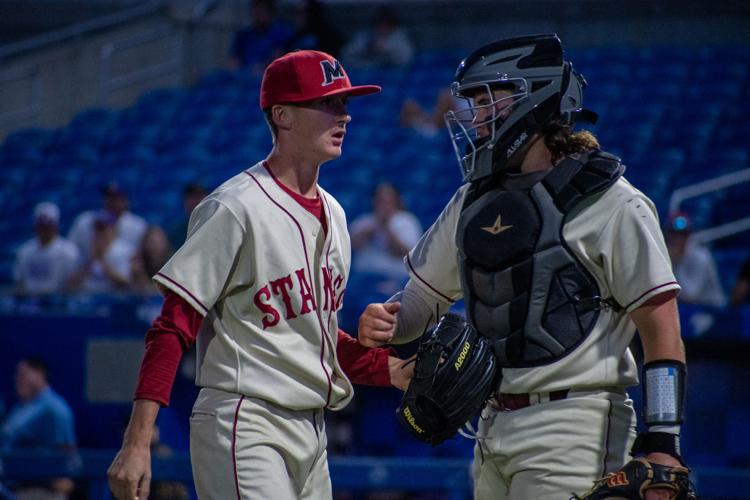 McCracken County’s Caleb Ehling and Jude Farley meet after Ehling works a 1-2-3 sixth inning against the Campbell County Camels. Ehling earned the 4-3 win and struck out seven in 41/2 innings of work. 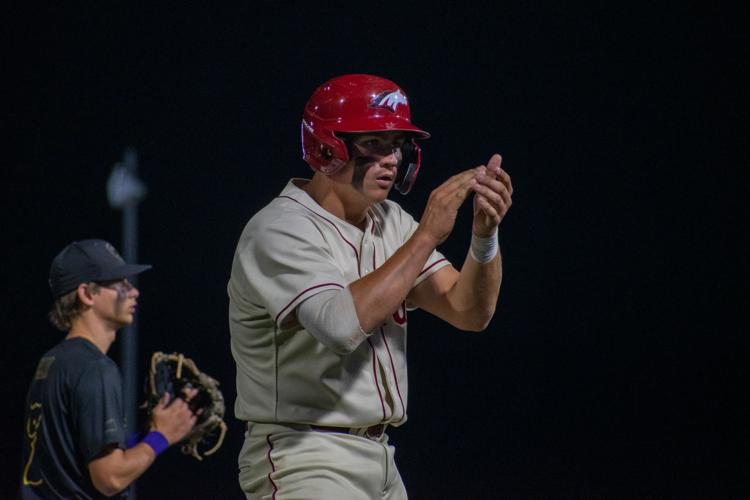 McCracken County’s Eli James hypes up his dugout during the 4-3 victory over Campbell County on Saturday night at Kentucky Proud Park. James went 1-for-2 with one walk and one run in the win.

McCracken County’s Caleb Ehling and Jude Farley meet after Ehling works a 1-2-3 sixth inning against the Campbell County Camels. Ehling earned the 4-3 win and struck out seven in 41/2 innings of work.

McCracken County’s Eli James hypes up his dugout during the 4-3 victory over Campbell County on Saturday night at Kentucky Proud Park. James went 1-for-2 with one walk and one run in the win.

LEXINGTON — Never count the McCracken County Mustang baseball program out even when they are down. On Saturday night, the Mustangs survived and clipped the Campbell County Camels in a 4-3 seven-inning dogfight at Kentucky Proud Park.

“Our guys are not going to quit, and you know, we didn’t play our best, but they had some timely hits,” McCracken County head coach Zach Hobbs said. “Campbell County is a good baseball team, and they are well-coached.”

Ross Aldridge started for McCracken County on the mound and lasted two innings. The sophomore hurler allowed four hits, two runs (one earned), one walk, and struck out one in his appearance.

“We just kept fighting,” Hobbs said. “Our guys are never going to give up, and at this stage, ugly pretty or whatever, survive and advance, which we’re trying to do. We get to come back to the final four again, and we’ve got a pretty good St. X club. So we got to come out and be ready to play baseball the best we can.”

The Mustangs and Aldridge squeaked out of the inning when Dylan Riley started a double play on Gross at second base and Tyler Fowler for the third out at first base.

Jake Napier struck out the side during the bottom half of the first inning. Although Napier struck out nine, he took the loss for the Camels. The senior threw four innings while allowing four hits, four runs (one earned), and three walks.

Caleb Ehling replaced Aldridge on the mound for McCracken during the top of the third. Ehling came in with one out and two on base. However, the sophomore lefty worked with dominance, inducing a groundout and striking out one after Vineyard scored on a passed ball.

“At that point (coming in), it was to get out of the inning and let our offense hit,” Ehling said. “I had to go out there and shut them down the best I could.”

Despite McCracken County being no-hit until the third inning, sophomore Scout Moffatt ripped a triple to snag the first Mustang hit. Moffatt plated the first run for the Mustangs on an RBI single by Dylan Riley. The Mustangs left Dylan Riley and Jack Bennett stranded in the bottom of the third as Nate Lang struck out on five pitches to end the inning.

Campbell County added one more run in the top of the fourth to make it 3-1. The RBI double by Caeleb James allowed Carson Clark to score. However, the inning ended as Vineyard grounded out to third baseman Bennett who fired the ball to first baseman Eli James.

With one out, Eli James and Cooper Ford drew back-to-back walks before Moffatt reached first base on an error by the Campbell infield. Jude Farley’s prowess at the plate moved the game to 3-2 as he knocked an RBI single to left field, scoring Eli James.

McCracken County tied the game when a pitch hit Miller Green with the bases loaded, which allowed Ford to score. Despite the Stangs rallying, Bennett struck out to end the inning. The Mustangs took the lead in the bottom of the fifth inning, making it 4-3. Lang led off with a seven-pitch walk before Eli James knocked a one-out single to left field. A fielder’s choice by Ford resulted in Zach Sims scoring on an error by the Camels. Ehling struck out two in the top of the sixth inning. Fowler struck out looking while Parker Schweitzer grounded out to Dylan Riley at shortstop, and Brayden Wells went down swinging.

Toward the end of the game, tensions flared as it became chirpy on and off the field. But Ehling on the mound didn’t let it affect him as he closed out the game. In fact, during the seventh inning, Ehling struck out the first two batters before Vineyard flew out to Dylan Riley to end the game.

“I tried to blur out everybody in the stands and remain focused,” Ehling said. “I like how our dugout is always in the game because that shows they are energized.”

Ehling earned the win for McCracken County. The lefty threw over four innings, allowing two hits, one run, one walk, and struck out seven batters.

“I’m so proud of these guys and how they fight and compete all the time,” Hobbs said. “We could have lost our cool or lost our composure, but they just kept playing and knew we had a chance. I love these guys, and I’m proud of them.”

Zach Franzen appeared in relief for the Camels. The freshman worked two innings, allowed one hit, and struck out one. On Friday night at Kentucky Proud Park, the McCracken County Mustangs will face the familiar foe, St. Xavier, in the final four of the 2022 KHSAA Baseball State Tournament. The two have met in five previous contests, with the Tigers taking three of the five against the Mustangs.