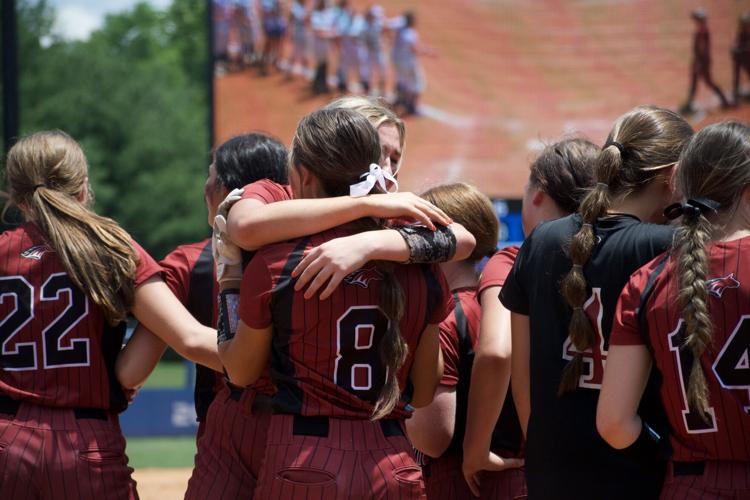 McCracken County’s KG Walker embraces senior Ariel Fox after the heartbreaking loss against Lexington Catholic in the semifinal round of the state tournament on Saturday afternoon. 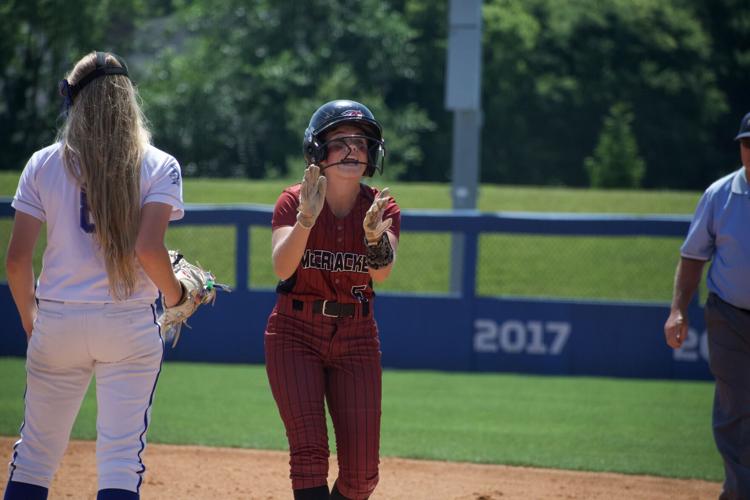 McCracken County’s Ellie Shoulders hypes up her dugout during the 6-1 loss to Lexington Catholic on Saturday afternoon. Shoulders went 1-for-3 in her final game for the 2022 season.

McCracken County’s KG Walker embraces senior Ariel Fox after the heartbreaking loss against Lexington Catholic in the semifinal round of the state tournament on Saturday afternoon.

McCracken County’s Ellie Shoulders hypes up her dugout during the 6-1 loss to Lexington Catholic on Saturday afternoon. Shoulders went 1-for-3 in her final game for the 2022 season.

LEXINGTON — When it comes to fast pitch softball, happiness and heartbreak often face off on the diamond. The game creates a sisterhood, an unbreakable bond that will go to battle together in every game — win or lose. For McCracken County’s sisterhood, the game served up heartbreak on Saturday afternoon.

The Lady Mustangs, who had only lost two games going into the semifinal round of the 2022 KHSAA Fast Pitch State Tournament, fell to Lexington Catholic, 6-1.

“We didn’t get the big hits we normally get when we have runners on base, and we had the people up that we wanted,” McCracken County head coach Tony Hayden said. “They made some big plays, but the errors were on routine plays. When it’s not your day, it’s not your day.”

Lexington Catholic jumped on the board in the first inning when Emily Lammers ripped an RBI double off of Ally Hutchins, scoring Abby Hammond. Despite Lammers in scoring position, the Mustangs could escape further damage in the inning as Ava Emmert grounded into a fielder's choice and Olivia Ryan flew out for the third out.

Although Annie White reached on an error with two outs in the top of the second inning, the junior was left on base as Izzy Story grounded out to the pitching circle.

“We tried to get them to understand when an umpire’s strike zone is tight for both pitchers. You have to be patient. You don’t have to swing at a ball you think is a strike because he wasn’t calling them,” Hayden said. “He was good for both pitchers and never deviated, so they knew, and we knew it. We couldn’t get settled in until about the fourth inning.”

The Knights plated two additional runs in the bottom of the second inning. With two outs, Kayla Mattingly scored on a wild pitch before Lucy Nash singled on a ground ball to Ellie Shoulders at second base.

The Lady Mustangs did not get their first hit until the top of the fourth inning, when Shoulders singled to center field. The next batter, Ariel Fox, reached on an error by the Knights.

Unfortunately, Hutchins grounded into a double play to make the first two outs in the inning. Lexington Catholic tagged Shoulders out at third, but Fox safely advanced to second base. The Mustang momentum ended as KG Walker grounded to the first baseman Lauren Kennedy.

“The work they put in from January to now, they completed their plan,” Hayden said. “Even though we got up here and beaten, the unfinished part is that we got where we wanted. We didn't get it done.”

The Lady Mustangs continued to fight going into the fifth inning as White reached on an error by Lexington Catholic and a pitch hit Zoe Smithson. However, the Knights kept McCracken County silenced as MiKaela Coburn and Rhea-Lee Joiner grounded out to end the inning.

White appeared in relief for the Lady Mustangs in the bottom of the fifth inning. The junior threw two innings in the circle, allowing two hits, three runs (one earned), and three walks.

Lexington Catholic continued to increase its lead in the fifth as Willoughby reached on an error by McCracken County as a ball cruised underneath Raygan Rodgers's glove. The error scored Emmert to make it 4-0.

The first out in the inning came with a standout play as Hutchins hurled the ball to home play, allowing Walker to touch home plate for the force out. However, the Knights added one more run as Caitlyn Kelley singled, scoring Willoughby.

The Lady Mustangs were down 6-0 going into the top of the seventh inning with heavy hitters. White knocked a perfectly placed lead-off single, landing in the outfield. The next batter, Story, reached on an error with momentum brewing for the Lady Stangs.

Senior Smithson’s final at-bat as a Mustang ended with a six-pitch strikeout. Smithson returned to the dugout with emotions written across her face.

McCracken County scored their lone run as Coburn singled to center field, scoring courtesy runner Cami Cox and advancing Addy Bennett to third base. Despite this, the final outs came as Joiner lined into a double play with a scorcher straight back to Hammond in the circle. The Knights tagged Bennett as she attempted to get back to third base to end the game.

The game ended with sophomore Shoulders consoling junior Joiner as she fell to the ground at John Cropp. For the two seniors Fox and Smithson, their final season was with an incredible run, and Hayden credited them for getting the team to this point in the season.

“We lost two of the best seniors we have ever had with the school. The best we have before was Bailey Vick and that group, which I compare for that season,” Hayden. “As John said, those two are irreplaceable. We don’t have anyone on this team that can replace them next year. We’re hoping we have two people step up and give us what they gave us.”

Per Hayden, Smithson will continue her softball career at Brescia, while Fox will attend the University of Kentucky for pre-med and hope to play at John Cropp as a Wildcat while she attends college.

WP: A Hammond; LP: A Hutchins