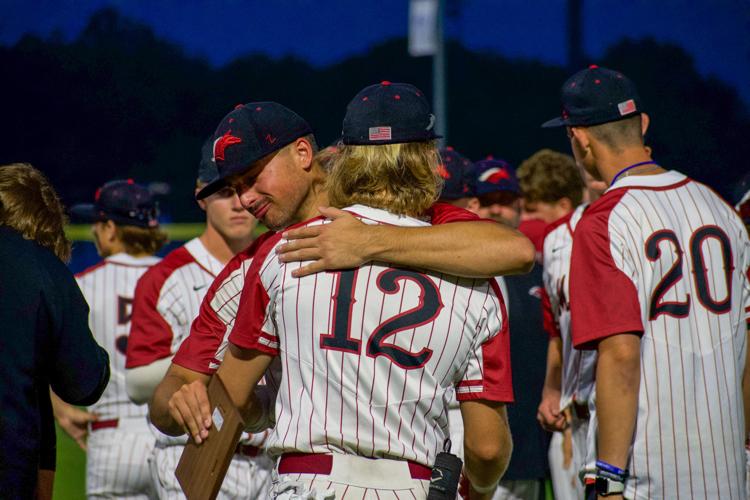 McCracken County’s Jack Bennett and Dylan Riley (12) embrace after the 5-4 loss in the semifinal round of the KHSAA State Tournament. Bennett and Riley competed in their final game as Mustangs on Friday night. 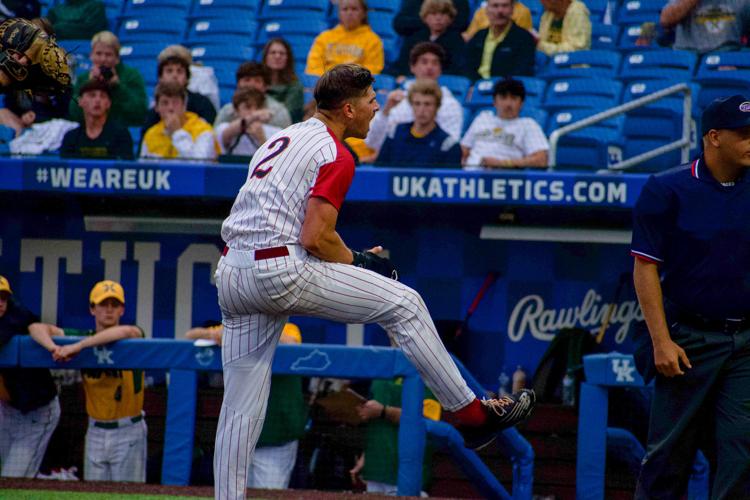 Jack Bennett hypes up the crowd after scoring in the 5-4 loss against the St. Xavier Tigers on Friday night. Bennett went 2-for-2 in his final appearance as a McCracken County Mustang.

McCracken County’s Jack Bennett and Dylan Riley (12) embrace after the 5-4 loss in the semifinal round of the KHSAA State Tournament. Bennett and Riley competed in their final game as Mustangs on Friday night.

Jack Bennett hypes up the crowd after scoring in the 5-4 loss against the St. Xavier Tigers on Friday night. Bennett went 2-for-2 in his final appearance as a McCracken County Mustang.

LEXINGTON — Baseball is not always a kind game. The game that makes men and forms brotherhoods also breaks hearts and often serves up a hot plate of disappointment. And on Friday night, the McCracken County Mustangs faced the cruel version of the game the team loves dearly.

“These guys battled, battled, and battled,” McCracken County head coach Zach Hobbs said. “We left some runners on base early, and it came back to haunt us at the end. But man, I’m so proud of these guys for the fight all year.”

The McCracken County Mustangs fell to a familiar foe St. Xavier in a heartbreaking 5-4 loss at Kentucky Proud Park in the semifinal round of the 2022 KHSAA Baseball State Tournament.

During the state tournament, McCracken County’s program was the first team to score against St. Xavier. The Tigers previously shut down Christian County and Central Hardin.

“This was a year that we were supposed to be down. That’s all we heard was McCracken’s down,” Hobbs said. “All these kids accepted roles and worked hard, bought in, and that’s why it hurts tonight. I thought this was going to be the group that did it.”

In the first inning, St. Xavier plated three runs. With one out, Cooper Smith tripled to left field as Cooper Ford leaped in the air in an attempt to snag the ball for the second out. But, after a bad read, the ball sailed over Ford’s head, allowing Smith to reach third.

Jake Bennett made it a 2-0 game as he ripped a home run into the home team’s bullpen. Jack Bennett, who started on the mound for McCracken County, struck out the next batter but gave up a solo home run to Landon Akers to make it 3-0.

“I’m so proud of them. I would go to battle with these dudes and how hard they fight and compete,” Hobbs said. “I love these guys and will miss the seniors a lot. But, unfortunately, we came up on the short end of the scoreboard tonight.”

Despite being down by three runs, McCracken County went to work in the bottom of the first inning. Jack Bennett knocked a two-out triple before Nate Lang drew a walk and Zach Sims loaded the bases after a pitch by Ty Starke smashed the lefthanded Sims’ hand.

Despite his hand immediately swelling and bruising, Sims stayed in the game to compete and help his team in what went on to be his final appearance in his junior season.

Unfortunately for McCracken County, the bases would remain loaded as St. Xavier collected their third out in the inning. Eli James struck out swinging on a four-pitch battle against Starke.

Caleb Ehling appeared in relief for the Mustangs in the top of the third inning. The sophomore came into the game from the bullpen with bases loaded and no outs. Ehling worked the mound, despite St. X scoring another run to make it 4-0 on a sacrifice fly by Akers.

McCracken County plated their first run during the bottom of the third inning as Miller Green led off with a line-drive single. Then, Jack Bennett drew a walk before Nate Lang singled on a hard ground ball to left field to load the bases. Next, Sims drew a walk, allowing Green to score from third.

The Mustangs rallied in the bottom of the fifth inning as Jack Bennett led off with a five-pitch walk. Lang brought Jack Bennett home on an RBI double to right field. On the throw to home from the outfield, the ball went into the net and allowed Lang to score from second on the umpire’s ruling. Lang’s performance pushed the game to 4-3.

The McCracken County bunch was not done fighting in the inning as Scout Moffatt ripped a double to center field with two outs. Moffatt’s double allowed Sims to score, making it 4-4. However, Moffatt was thrown out in an attempt to advance to third base to end the inning.

The game remained tied going into the top of the seventh inning. McCracken County ran into a mishap with two outs, allowing St. Xavier to take a 5-4 lead as Alec Hildenbrand scored.

Senior Jack Bennet wasn’t ready to say goodbye to a program that had been a part of his life for quite some time. On the fourth pitch of his at-bat in the bottom of the seventh inning, Jack Bennett ripped a double to left field and was in scoring position as the tying run.

Unfortunately, Bennett was left in scoring position as McCracken County fell in order after his double. Lang and Sims struck out before James popped out to first base to end the game.

“This group of seniors has really accomplished something. They fought through the COVID year and through years where we had some really good kids ahead of them. Some of these guys didn’t get an opportunity to play until this year as seniors,” Hobbs said. “Cameron Willis battled through, I think, two broken bones to compete this year. Cooper Ford stepped up, and you know Jack Bennett and Dylan Riley did great things for us.”

As Hobbs mentioned, his senior group for the 2022 season stepped up and competed with their whole hearts bought in. From Willis suffering a broken hamate bone to Jack Bennett winning Gatorade Player of the Year.

“Landen Jones is a guy with us that was a big part of the team culture,” Hobbs said. “He’s as good as coaches that we have in the dugout. We will miss this group of seniors; I’m so proud of them. I told them that I love them and that I’m here for them for anything because it’s bigger than baseball.”

Ehling took the loss for McCracken County. The sophomore allowed one hit and one run while walking three and striking out four in his final season appearance.