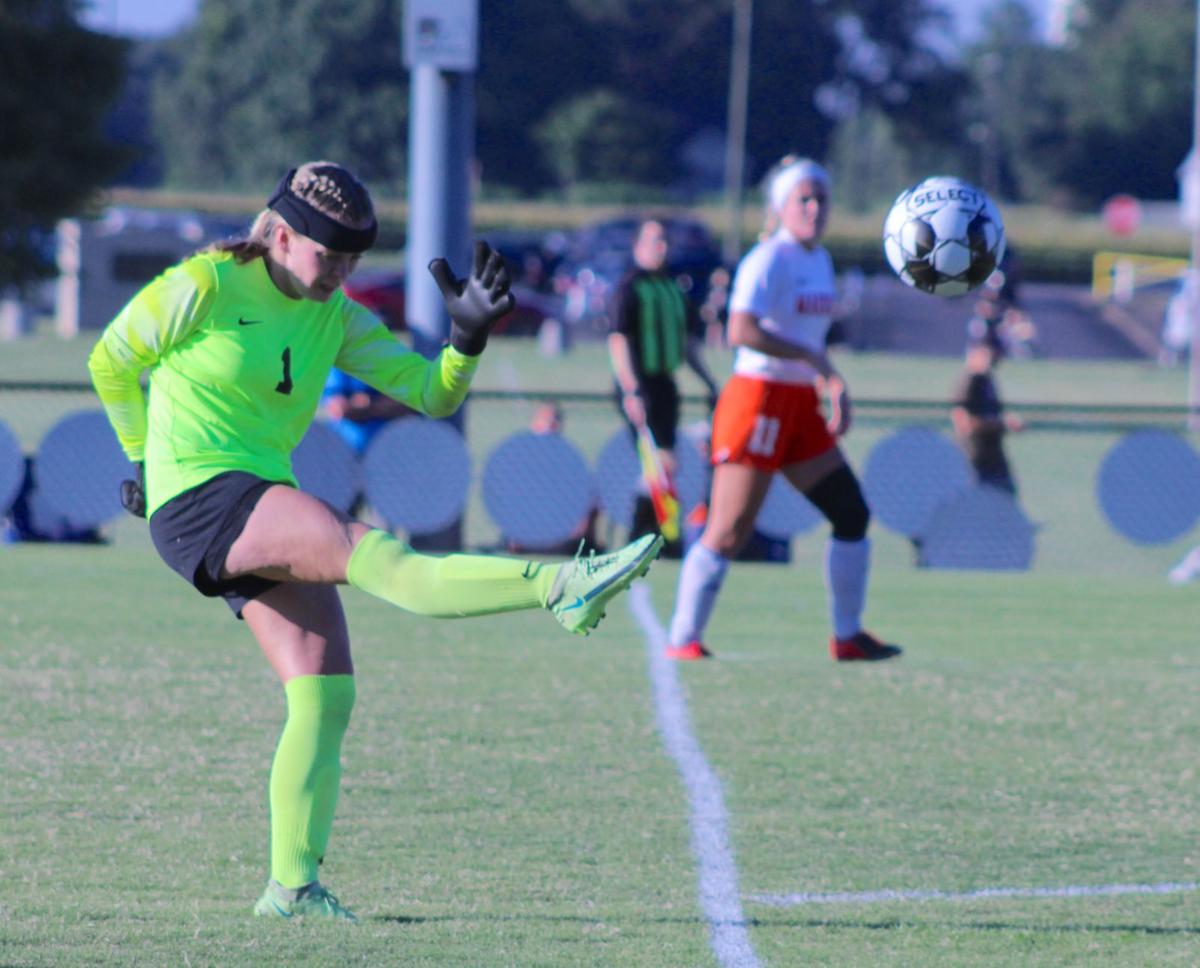 Above left: Marshall County goalkeeper Parker Perry booms a kick early in Tuesday’s 2-0 win over Murray. Above right: Marshall County’s Alex Shaverin (27) tries to find the opportunity to get past a Murray player in the second half Tuesday night. 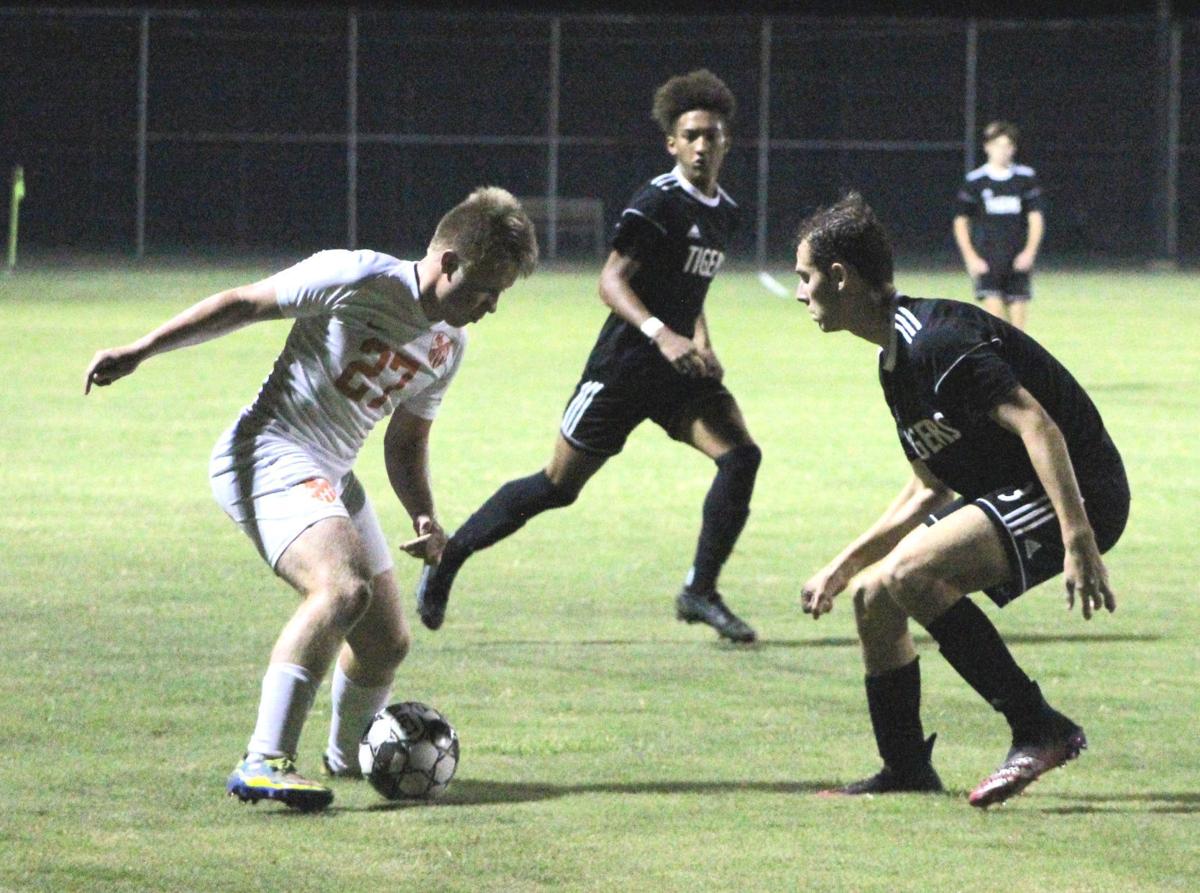 Marshall County’s Alex Shaverin (27) tries to find the opportunity to get past a Murray player in the second half Tuesday night.

Above left: Marshall County goalkeeper Parker Perry booms a kick early in Tuesday’s 2-0 win over Murray. Above right: Marshall County’s Alex Shaverin (27) tries to find the opportunity to get past a Murray player in the second half Tuesday night.

Marshall County’s Alex Shaverin (27) tries to find the opportunity to get past a Murray player in the second half Tuesday night.

Marshall County’s girls had plenty of scoring opportunities — approximately 18 of them on goal — Tuesday against Second District rival Murray High, but the Lady Marshals are not going to scoff at a 2-0 victory.

All the damage was done in the first half at Mallary France Soccer Complex with sophomore forward Zoe Maxlow delivering the ball to her junior cohort Kinsley Perry for Marshall’s first score in the 19th minute of play. Then with under two minutes left, Kelsey Crass got the fast break feed from Anna Robertson for the final goal.

There were kicks off the crossbar and shots directly into the grasp of Lady Tiger keeper Ella Parker, but in a district match and a rivalry one at that, any and all goals are welcomed.

“I thought we left some goals that we ‘coulda-shoulda’ scored but that’s part of it. You’re not gonna hit every shot. But I thought we had some good opportunities,” Lady Marshals head coach Michael Boone said. “There were some where we shot instead of passed or hit the goalkeeper’s hands instead of the back of net, but you’re not going to be disappointed in a 2-0 win at Murray against a pretty good Murray team.”

The win also marked the sixth consecutive shutout and 10th of 13 matches posted by Marshall County’s defense and keeper Parker Perry. Perry, a junior, has 67 saves against only six goals allowed during the team’s 11-2 campaign. She recorded four saves Tuesday.

Marshall (11-2, 5-0 in district) is ranked fourth in the KHSAA’s top 30 team defenses in the state, while Perry is atop the state’s keeper shutouts listing.

As Boone explained, defense is also the name of the game and credited Johnna Walker and Chase Hill.

“Johnna’s kind of leading the charge in getting people in the right position and her physicality of being able to hold people off the ball has improved even from last year,” the coach said. “Chase is fantastic with her physical presence in the middle, too.

“The midfield has done a good job preventing balls from being played that might be penetrating balls. Again, our team defense as a whole is pretty solid.”

Saturday, Marshall County will host Greenwood at 3 p.m. at Colburn Stadium. The Lady Gators are 6-4 against some familiar teams in the likes of Madisonville-North Hopkins (a 5-0 Greenwood win) and Sacred Heart (4-1 loss). Marshall had earlier beat Madisonville, 2-0, and lost 2-0 to Sacred Heart.

Boone noted the Lady Marshals and Lady Gators had played each other during summer camp and have faced off before as tests against Region 1 and 4 powerhouses.

“We know there’s a chance in the Sweet 16, Elite Eight that we might meet up,” he said. “It’s a good quality game we may see potentially later in the postseason.”

Marshals 4, Tigers 0: Marshall County’s boys squad build a commanding 3-0 lead over Murray in the first 27 minutes of play and sealed things in the 64th minute with the second straight William Lynch goal.

Lynch’s combination of speed and power helped score in the 27th minute in the first half for a 3-0 lead to take into intermission. His capper found the back of the Tigers’ net with a close range blast after dodging defenders.

Lynch is averaging 1.6 goals per match with a total tally of 21 to rank fourth in scoring in the state. He is also fifth in points (50) for goals and assists (8).

Colin Shadowen got things rolling for Marshall County (10-1-2, 5-0) with a header score in the 23rd minute, followed quickly with Jericho Evans’ goal for the 2-0 lead. Kian Court and Logan Parker provided assists.

“It was a fun match,” head coach Bryan Blevins said. “It was a little bit better this time other than the last time,” when Marshall fell behind 1-0 early but rallied for a 5-1 win. “This match, we came in a little bit more ready to go and thought we were able to withstand what they were trying to throw at us.”

Defensively, net minder Steven Claborn recorded three saves to help secure the shutout. It was the Marshals’ seventh of the season which has helped post Claborn second in state keeper shutouts with five.

It has been a balance of offense and defense for Marshall County, which is 13th in both the state’s top scoring and top defensive teams, per the KHSAA. Tabbed 12th in MaxPreps’ state prep soccer rankings, they are also sandwiched between top-ranked North Oldham, who defeated the Marshals 3-0 Saturday for their lone loss, and No. 16 Warren Central, who Marshall will face Saturday at 11:30 a.m. at Colburn Stadium.

“When you play top 25 teams, you don’t know each other and you just play soccer,” he said. “With Murray, you’ve got to play soccer but you’ve got to bring emotions to it. It’s a good test to get us grounded and push forward to where we need to go.”