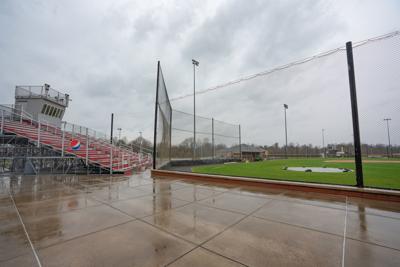 Everything was set for baseball season to begin this week around Kentucky.

The ongoing COVID-19 pandemic has brought to a full stop athletics around the country, including here in Paducah, where McCracken County was to begin its trek back to the state tournament, coming off last season’s finish as the state runners-up.

The Mustangs, with first-year skipper Zach Hobbs, new uniforms and some new faces on the coaching staff, were feeling good about where things seemed headed, with two scrimmages and a significant amount of intrasquad work under their belts.

“It was a complete shock, honestly,” McCracken senior second baseman Elijah Wheat said Thursday, describing his reaction to the sudden halt. “I didn’t ever think it would come to this, maybe not even having a season at all. I’m just trying to stay positive and just keep praying. Hopefully, if we do have a season, even if it is short, we can get one in and just have some fun.”

For Wheat, also McCracken’s quarterback, who committed to the University of the Cumberlands to play football, it seemed like, maybe the senior class, numbering eight in total, was playing with a lighter load.

“We definitely had a target on our back, after what we did last year,” said Wheat, who hit .333 with six doubles, three triples and 17 RBIs in 41 games. “But, I think we kind of came in more relaxed, especially for me, I came in more relaxed. I was just out there trying to have fun.”

There was optimism, too, from McCracken’s eight-player junior class, many of whom saw significant playing time last year.

“We were definitely really hungry,” McCracken junior outfielder/pitcher Ben Higdon said. “We kind of felt like this was our year. We had most everybody back (and) a lot of big pieces, a lot of guys who looked like they were ready to step up in big spots. We were really hungry and excited.”

And, Higdon’s help was needed, too.

McCracken graduated its top three pitchers, Jacob Ehling, Dylan Schneider and Garrett Crabtree, who combined for 162 of the Mustangs’ 262 2/3 innings and 161 of their 262 strikeouts.

Brandon Dodd was hoping for a big junior season, too.

The youngest of the Dodds to represent McCracken on the diamond, after cousin Audrey Dodd — the 2014 Kentucky Miss Softball — and older brother James Michael Dodd, a four-year standout for Geno Miller’s Mustangs (whose sophomore season at Freed-Hardeman was also cut short), there was growth potential for the left-handed hitting first baseman/designated hitter, who hit .345 with three doubles and 23 RBIs in 35 games a season ago.

Adjusting in the classroom, too

While the baseball season slammed on its brakes, the school year couldn’t.

Sure, no students are in the classroom right now, but they’re still learning remotely.

That’s been an adjustment, too.

“It’s such a different perspective, there,” Higdon said. “Going from being at school with your teachers and everything to having to do all this work online, it’s definitely different. As far as having one day to really prepare for this, I feel like our teachers did a great job. I think we have some of the best teachers. Having to adjust on the fly was a totally out-of-the-blue experience that nobody really saw (coming). We went from Friday (in school) to totally online classes.”

Hobbs ready, if or when season comes

For Hobbs, who spent 2007-10 as the skipper at Calloway County, and has to his own credit a First Region championship in three trips to the First Region title game, it’s a bittersweet start to his first year back as the head man, replacing Miller, who won 508 games in 17 seasons as a coach at three high schools.

“Things were going really well,” Hobbs said. “We had a really good fall and winter. We were ready to go.”

Still, though, the response from his team, Hobbs said, has been good.

“They’re taking it well,” he said. “Everybody wants a season. I miss the guys.”

There are some newer faces on Hobbs’ bench, this year.

Josh Byrd, who last season was the first base coach for Chris Johnson at Paducah Tilghman, joined his brother, McCracken boys basketball assistant and head girls track coach Jesse Byrd, and will be a varsity baseball assistant.

McCracken and Murray State alum Cole Womack and Lone Oak grad Kalen Parker are helping out, too, as is former Lone Oak pitcher Jack Coleman, who is the Mustangs’ new pitching coach.

Scott Matlock and Taylor Follis are back on the bench, too, after joining as assistants a season ago. Ronnie Coleman, Jack’s dad, will be the freshman team’s coach.

McCracken had, too, a veteran from the armed forces set to throw out the first pitch at each of the Mustangs’ 16 scheduled home games.

“It was really cool,” Hobbs said.