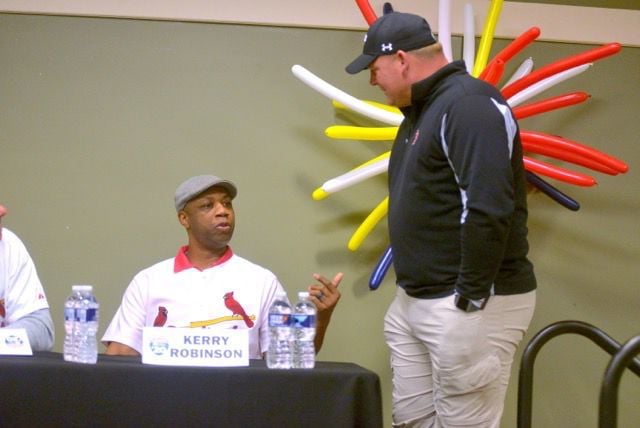 St. Mary baseball coach Chris Haas, right, talks with former teammate Kerry Robinson on Jan. 20 when the St. Louis Cardinals Caravan made one of its stops in Paducah. 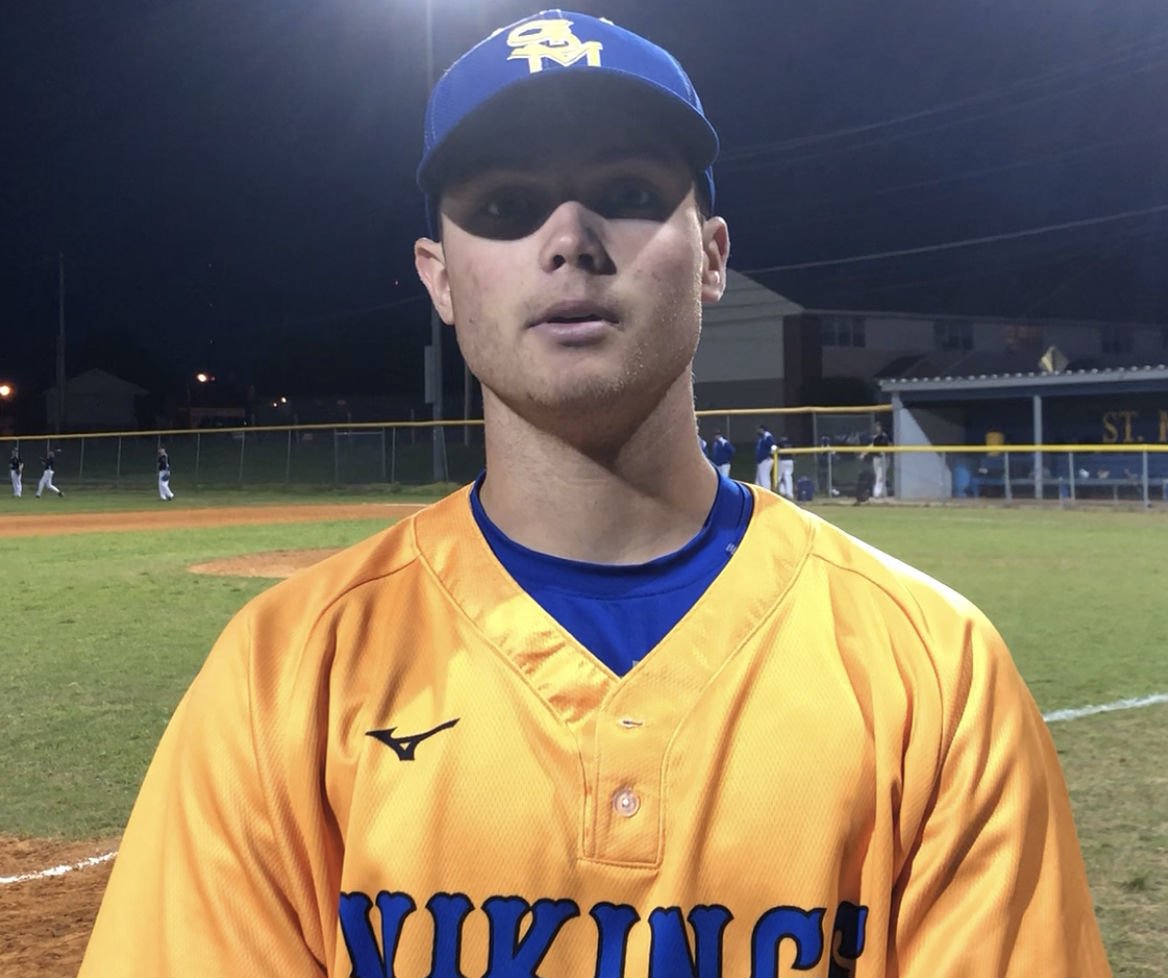 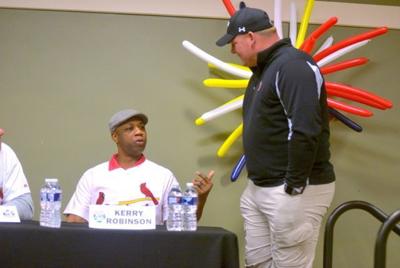 St. Mary baseball coach Chris Haas, right, talks with former teammate Kerry Robinson on Jan. 20 when the St. Louis Cardinals Caravan made one of its stops in Paducah.

In 1995, Chris Haas was a highly-touted baseball prospect for the St. Mary Vikings, playing for then-coach Louis Haas, his father.

Chris Haas — who in ’95 was taken by the St. Louis Cardinals with the 29th-overall pick in the Major League Baseball amateur draft — is now the skipper, in his second year at the helm. His son, Bryce, is a junior utilityman.

“It was a little bit of a circus,” Chris Haas said. “My first scrimmage game, it was against Lone Oak, and there were 25 scouts at the field at St. Mary. It’s something that I wasn’t necessarily anticipating. But, you’re like, ‘Man. This is cool. This is really cool. They’re coming to see me play.’

“But at the same time, it wasn’t about me. It was about the team and what we could do on the field to make the most of it and put a winner on the field there at St. Mary. We had a good stretch. I was fortunate that my dad was the coach.”

The process was, as Louis Haas told Joey Fosko, the late Paducah Sun sports reporter in May of 1995, mentally and physically exhausting, but with the benefit of time — and his usual humbleness — Chris Haas, who jumped between junior and senior year from outside Baseball America’s top 100 to inside its top 25, admitted he felt the pressure.

“You’re very proud that people are coming to see you, and you’re excited,” Chris said. “You’re proud to show them what you can do on the field, to see if you merit getting drafted where you hope you are. As the season goes on (and) as it gets closer to Draft Day, the stakes get a little bit higher.

“As the stakes get higher, you kind of put more pressure on yourself. Inevitably, in baseball, you’re going to hit a small rut. I did, my senior year. About a month before the draft, I struggled with the bat, not terribly, but everybody goes through that a little bit.”

Eventually, Draft Day came. And, even that had its nerve-wracking moment.

“This was before all the ESPN stuff, where people are showing up to (film) you throw on the jersey when you get drafted,” Chris said. “My dad and I, we’d done some stuff on the farm that morning, and you just sit around the house and wait for the phone call. You don’t know who’s going to call, but you know the draft is going on somewhere. You’re just waiting for the phone to ring.

“I’ll never forget. Tom McCormick was my scout, he called me and said, ‘Hey, Chris. We’ve got the 29th pick and we’re getting ready to pick you. I just wanted to call and let you know.’ I thanked him and he said, ‘As soon as we pick you, I’ll call you back.’

“An hour went by. Two hours went by. Three hours went by. So, dad gets on the phone. My uncle Eddie (Haas) was the assistant (general manager) to Dan Duquette in Boston. Eddie was at the draft. He (Louis) couldn’t get a hold of Eddie. He’d finally gotten hold of Paul Snyder, who was his roommate in pro ball. Paul was the scouting director with the Atlanta Braves. Paul confirmed that St. Louis did pick me with the 29th pick. But, there was a three- or four-hour stretch, there, where I was like, he (Tom) was going to call back, but he didn’t.

“It was a great opportunity and a fun experience, and to be able to share that with my dad, those memories, you can’t replace them, at all. It was a good time for both of us.”

Bryce making his own pathAnd, sure, while Bryce — Chris’s eldest son — would love to follow in his dad’s footsteps, he’s much more content blazing his own trail.

“Never once has he (my dad) said that he expects me to be him,” Bryce said. “I don’t expect me to be him. I’m not going to get drafted. I love baseball and I want to play in college, so bad. That’s why everything going on right now with the coronavirus has taken a toll on me. I’m making my own path.”

“I don’t know another kid his age who is a better student of the game than he is, and (who has) the knowledge he possesses about the game for a 17-year old,” Chris said. “That has a lot to do with growing up in a baseball family, ever since he was able to pick up a Wiffle-ball bat. He’ll be just fine. This is a big year for juniors. Bryce is making the most of it. He’s not playing the X-Box. He’s working hard, not only in conditioning and lifting weights, but still throwing and hitting. When the green-light happens, to where we can start the baseball season again, he’s going to hit the ground running.”