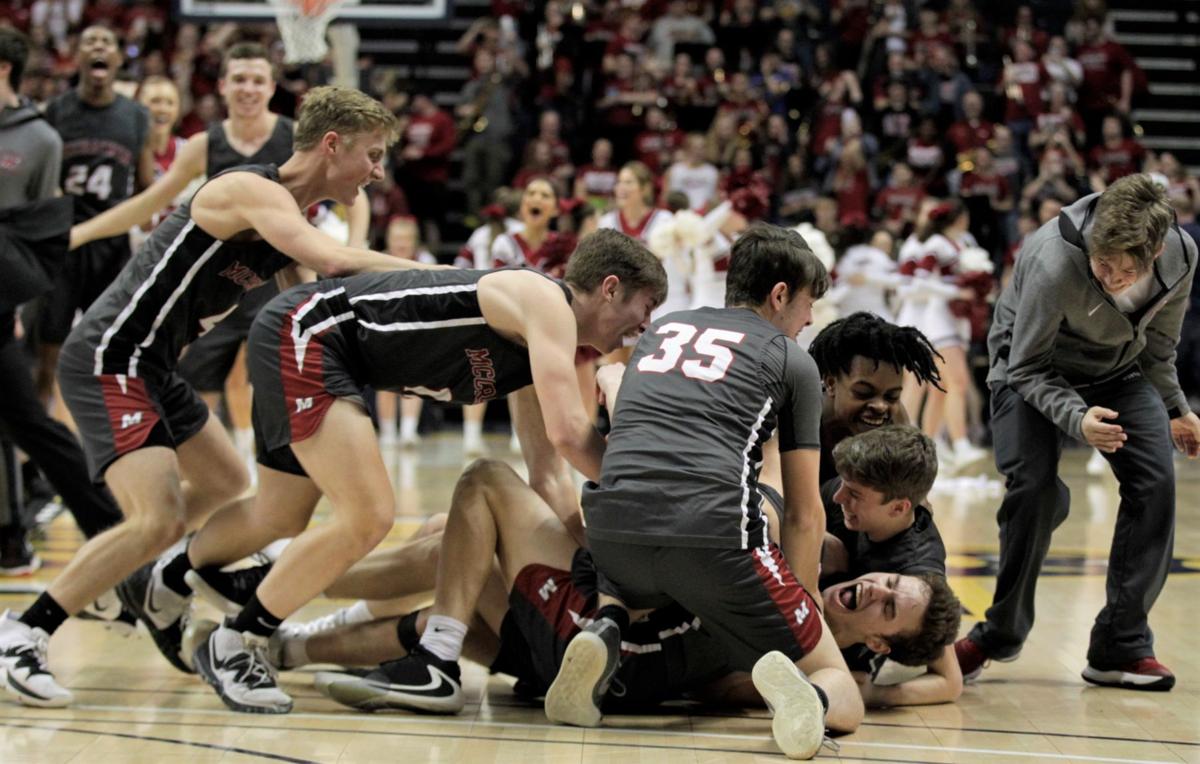 With a 43-42 win over Marshall County on Sunday, McCracken County celebrated its third First Region boys' basketball championship and the second in three seasons. 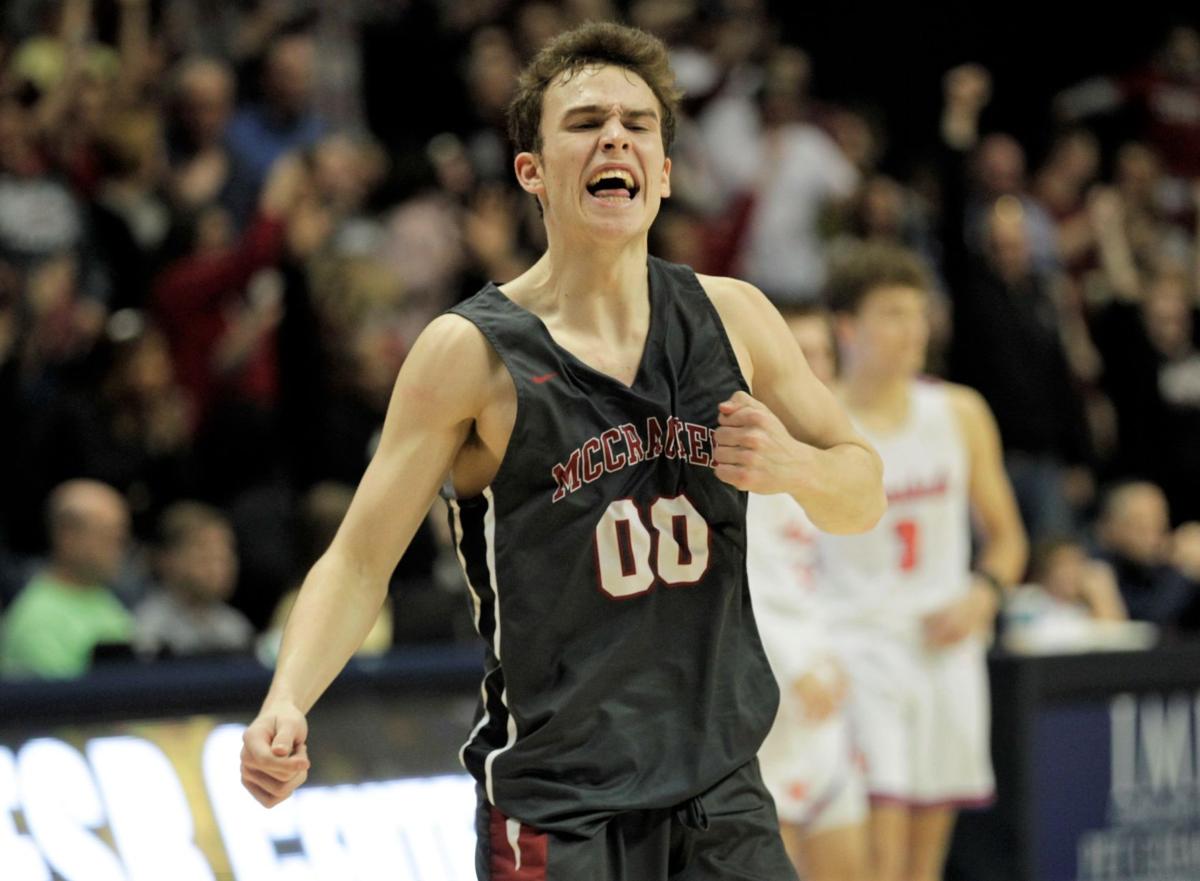 McCracken County forward Jackson Sivills had 21 points and 11 rebounds for the Mustangs. 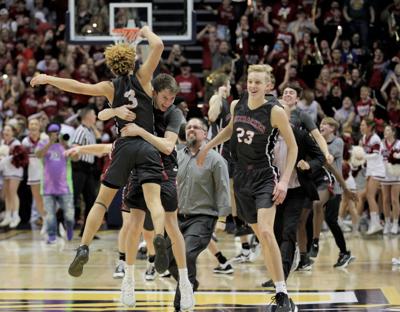 With a 43-42 win over Marshall County on Sunday, McCracken County celebrated its third First Region boys' basketball championship and the second in three seasons.

McCracken County forward Jackson Sivills had 21 points and 11 rebounds for the Mustangs.

MURRAY – The final minute of McCracken County’s 42-41 win over Marshall County in the First Region championship game at the CFSB Center on Sunday felt like an eternity.

With the Mustangs ahead 39-37, Marshall County guard Zion Harmon made a fadeaway jumper to tie it.

Harmon’s fourth foul, which sent McCracken County forward Jackson Sivills to the line with 28.3 seconds left, set up the second lead change, after both free-throws found their target.

Coming down the floor after a Tyler Powell three-pointer from the right corner gave Marshall County a 42-41 lead with 10 seconds left, McCracken guard Noah Dumas drew a foul that would send him to the free-throw line with his team’s season in tow.

He made both free-throws, putting the Mustangs ahead by one.

The score would stick, even after a controversial no-call might’ve sent Tyler Stokes to the free-throw line with a chance to tie the game or put the Marshals ahead with 1.8 seconds left.

For Sivills, who finished the last of his high-school games – but far from the final game on what will be his college floor – the 21-point, 11-rebound double-double, helped the Mustangs earn their second trip to Rupp Arena in three seasons.

“It’s been a great season with a great team,” said Sivills, who afterward was named the Joey Fosko First Region MVP, after the late Paducah Sun sports reporter. “I couldn’t ask for better.”

Neither team led by much.

The Mustangs had a two-point advantage, 19-17, at the half, after overcoming a 6-2 Marshall County start.

The largest lead, for anyone, was McCracken’s. It was 33-24 with 6.3 seconds left in the third quarter, before a half-court trey from Harmon as time expired cut that margin to six.

“That was a very low-scoring game,” McCracken coach Burlin Brower said. “It’s always hard to come by points in the regional tournament. It seems like the goal gets a little smaller and the ball gets a little bigger.”

While several of the Mustangs’ upperclassmen are celebrating their second regional title, this is the first for senior forward Ramon Heard, who transferred from Ballard Memorial prior to his junior season.

“It feels really good,” Heard said. “It’s a great experience for everybody and the whole team. It was real tough because we were down a man (Ronnie Jones). Like Coach (Brower) said, we had to come in here, be focused, pick up the slack and just leave it all on the court. We’re going to face (tough) competition, so we’re going to prepare, keep our bodies right, rest and come ready to play.”

Bryce Flatt, who earned the prestigious Rex Alexander Award, given to the senior who demonstrates excellence not only on the floor, but in the classroom, said the Marshals’ biggest improvement wasn’t necessarily with scoring or defense, but instead team chemistry.

“Over the season, we got closer and closer,” he said. “We started playing more together and looking to make the right play, not just looking for ourselves.”

And for Harmon, who finished his junior season – the first at Marshall County after eligibility issues from a transfer from Adair County forced him to sit out the 2018-19 campaign – with a 16-point game and 25.7 for the year, there’s confidence that the Marshals (23-11) will be back at The Bank for the final game of his senior year.

“We played well together,” he said. “We grew as a team. Sometimes, you’ve got to take it on the chin. There’s a lot of liabilities that we couldn’t capitalize on. It was a good season. I’m just going to keep on going.