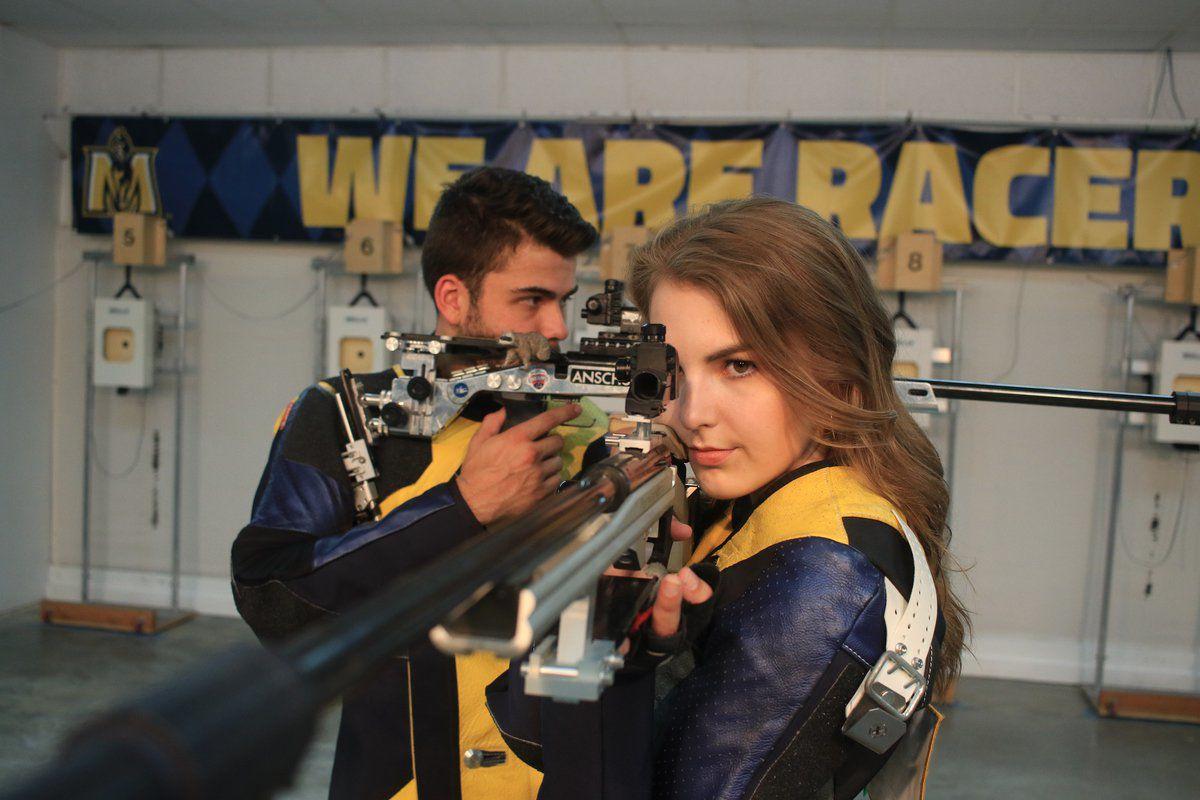 Murray State's Meike Drewell (foreground) and Shelby Huber pose with their rifles prior to the start of the 2019-20 Racer rifle season, which begins this weekend at Pat Spurgin Range in Murray. The Racers are seeking a fifth-straight OVC title and a chance at a national championship next spring. 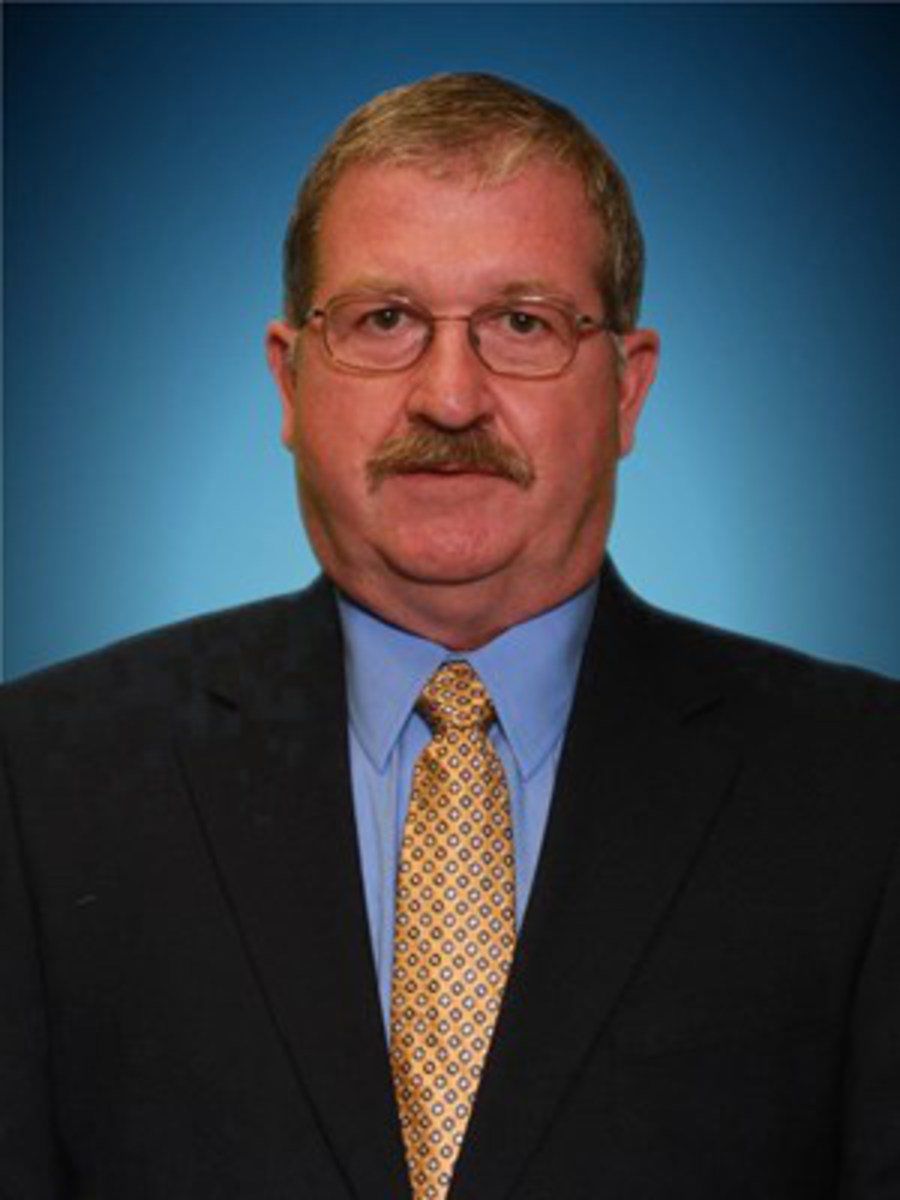 Murray State's Meike Drewell (foreground) and Shelby Huber pose with their rifles prior to the start of the 2019-20 Racer rifle season, which begins this weekend at Pat Spurgin Range in Murray. The Racers are seeking a fifth-straight OVC title and a chance at a national championship next spring.

And absolutely zero experience competing in the sport.

It isn't often a sterling resumé of this nature is the figurehead of a college athletic program.

But this is Alan Lollar, longtime skipper for Murray State rifle: a perennial power in the sharpshooting ranks.

A program with a national-title history.

An Olympic gold medalist -- Pat Spurgin -- the namesake of its home range, located in the subterranean concrete of Roy Stewart Stadium.

And a team burning with desire to (again) make it to the final day of the NCAA Championships, and come home as the top team in the country.

"We've been very close," Lollar said. "Last year, we were in it until the last air relay of the match. It's really hard to tell in this sport, because unless you're really in tune to the scores being shot ... people are shooting at different speeds, and some finish early. And so it's really hard for the general public to (know). We're actually working on ways to display scores, so that it's more normal for people. But I knew going into that last relay, we had our chance.

"And that's ... our stated goal is to play on the last day of the season. If you're playing on the last day, you've got a chance. And we just want to put ourselves in that position to take that chance. We did last year. We've done it the last three years at one time or another, but last year was probably as late as we've been in the match with a chance at it."

Four-year All-American and MSU Class of 2019 graduate MacKenzie Martin is back in Murray for this season as Lollar's first-ever coaching assistant during his tenure. She's one piece of the Racer puzzle, working to win a fifth-consecutive Ohio Valley Conference team title in 2020.

Like Roe and Schlapfer, she could've gone to the Olympic Training Center in Colorado, and admits she likely would've been boarded up with the rest of her squad on the U.S. National Team.

But also like Roe (U.S. Army Reserve) and Schlapfer (returned to her native Switzerland), she's carving her own path to the Olympics, and staying a little bit closer to her college roots for a reason.

"This coach is the coach I want," Martin said of Lollar. "He's the one doing everything he can for the team. He's never shot rifle, yet I swear he's the best rifle coach you could ever find. And I think it's because he's listened for the past decade-plus of people telling him what they're doing right, and how they're doing it. And so he's kind of made this big bank of information. ...

"He's the best mental coach you could ever ask for, because he reads every literature known to man on how to be a good mental shooter. Part of me thinks any sport he picked he would've been an amazing coach at, because he's made for it. I don't know how to describe it. He has all the good qualities of being a good leader."

In many sports, an athlete's mechanics are easy to diagnose if something is troubling. Shanking a golf ball? Correct your swing. Missing free throws? Adjust your feet and elbows. Failing to tackle? Get in the weight room.

But how do you correct a gunsmith? How do you work on a sport so heavily-laden with minutia, that heart rate, breathing, core posture, and even the psychological static can be the difference between shooting nine points per round, instead of 10?

"The way I describe it is we are 'anything but traditional,' " he said. "Every shooter in the NCAA on every NCAA team has all the skill they need to shoot 10s. It comes down to 'why do you not?' Our whole program, process, or whatever you want to call it, is built on communication from (shooters). If they will tell me what's bothering them and keeping them from doing that, then we look for the answer to that problem.

"One of my friends and mentors, Dick Weaver, taught me a lot about something called 'management by objective,' which is a fancy way of saying 'tell me what your problem is, and we will fix the problem.' That's the way we try to do it. The athletes that really work the best here are the ones who try to communicate.

"Football and basketball can watch a video, and they can show that they did this wrong, and that we need to fix this or drills for this. When it comes to our match, (all the shooters) look the same. You don't see movement. You don't see a lot of the things that would tell you what is going right or wrong. It has to be communicated by them. The field we compete on is five inches wide between our ears. If they can tell me what they need, I will do my best to find a way to get it to them."

Lollar believes he's got a squad that can come away with its fifth-consecutive OVC title because of a strong freshman class and critical middle relief.

But any success MSU has in 2019-20 likely has to come from seniors Meike Drewell (pronounced My-cah Drev-ell) and Shelby Huber, who've been critical cogs in MSU's last four years of championships.

Drewell led the Racers at the 2018 NCAA Championship with an 1,173 aggregate and a season-high 592 in air rifle.

"Shelby and I being seniors, we've already been here three years," she said. "We have the technical stuff of our position pretty much figured out for the most part. So for us, it's going to be mainly mental. Learning how to be leaders on the team and show up every single day and every single match. For us, it's really hardcore on the mental training before March. We both have shot in the NCAAs where we shot them last year, we know what to expect mentally. Now, after shooting it, this is the stuff to prepare for because we struggled with it last time."

Huber, meanwhile, shot in all 14 matches for MSU a year ago and was named to the All-OVC First Team in smallbore following the 2018 OVC Championships.

"This year, it seems like we're going to have a bit of a strong air rifle team versus the past," Huber said. "Murray has had a history of being a really good smallbore team (though), and essentially something that we train a lot in are the two sling positions in kneeling and prone. That's where you really make a difference in a big match like the NCAAs, or matches in general. If you get a really strong lead in sling, then it's really tough for another team to catch up. Air rifle scores end up being just about the same throughout because everyone is consistently good across different teams. That's something that's kind of our strategy, I guess. Being a sling team, in a sense."

MSU's 2019-20 season begins this weekend at home in a tri-match with conference foes UT Martin and Jacksonville State.

Anna Scheer So. Trussville, Ala.

Anna Scheer So. Trussville, Ala.