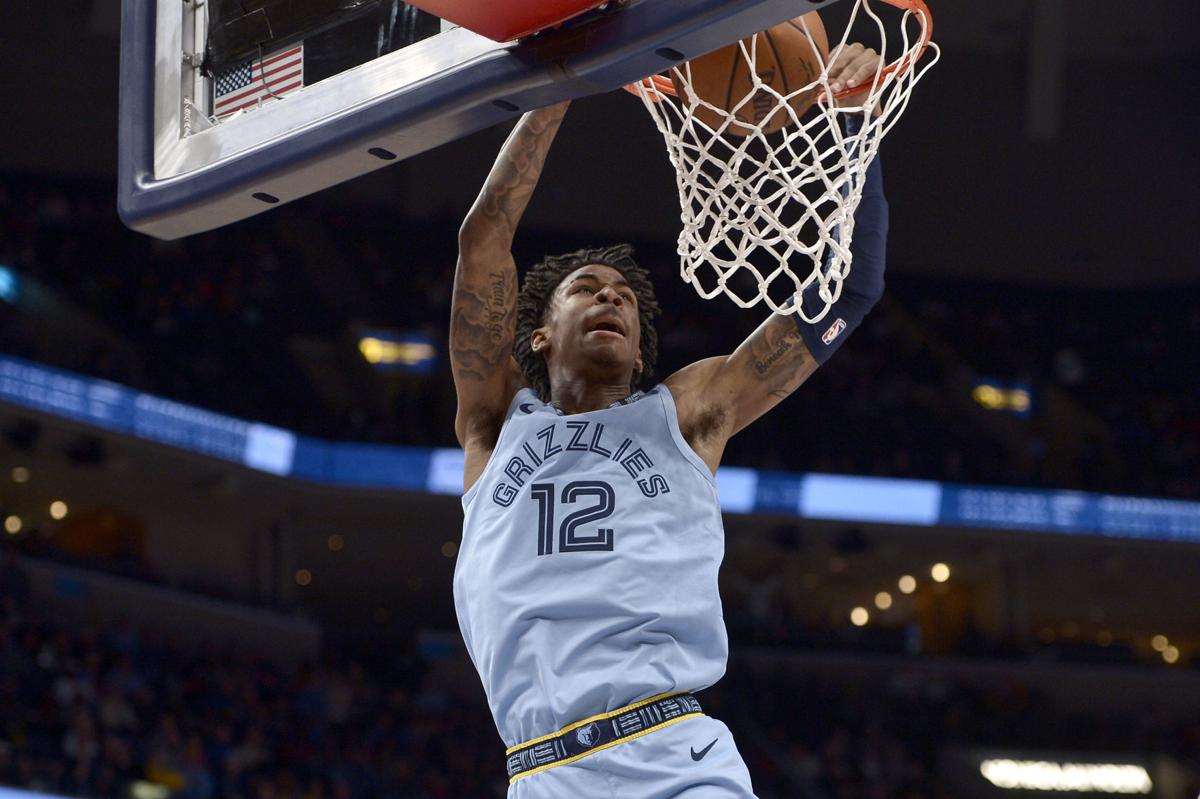 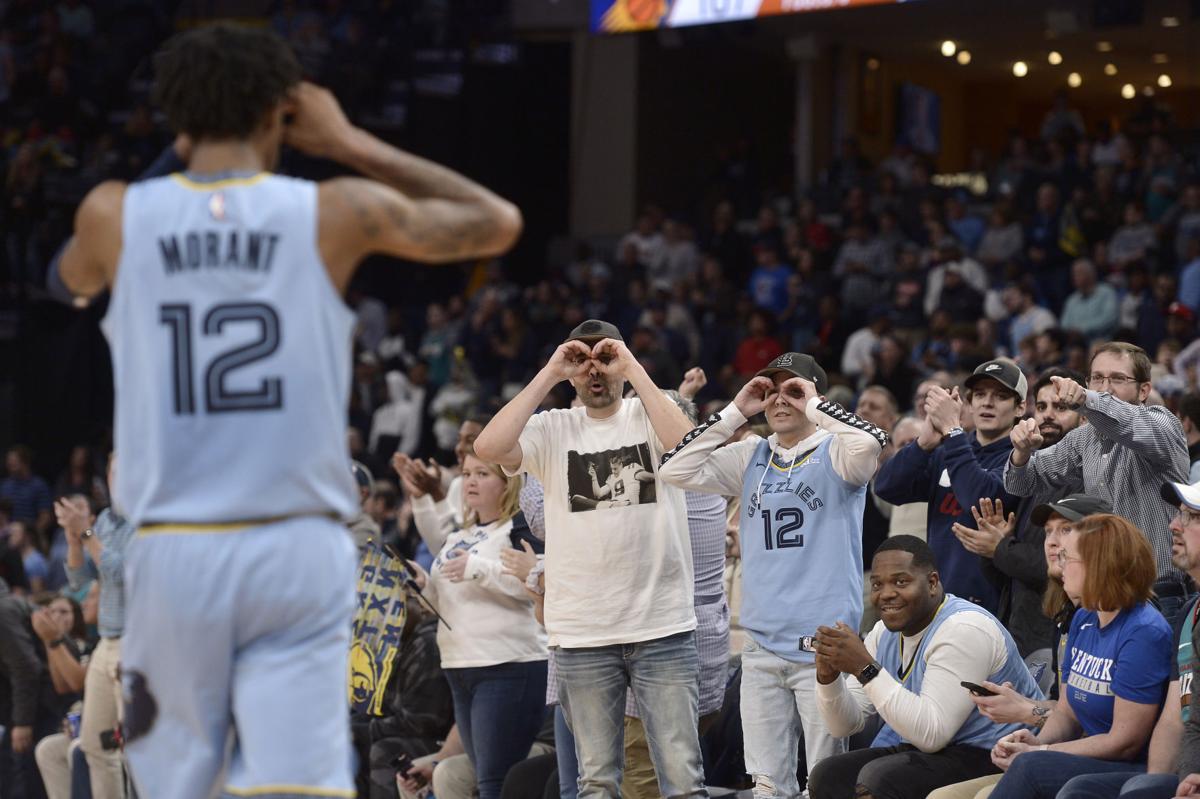 Memphis Grizzlies guard Ja Morant (12) gestures to fans after an assist in the second half of an NBA basketball game against the Phoenix Suns Sunday, Jan. 26, 2020, in Memphis, Tenn. (AP Photo/Brandon Dill) 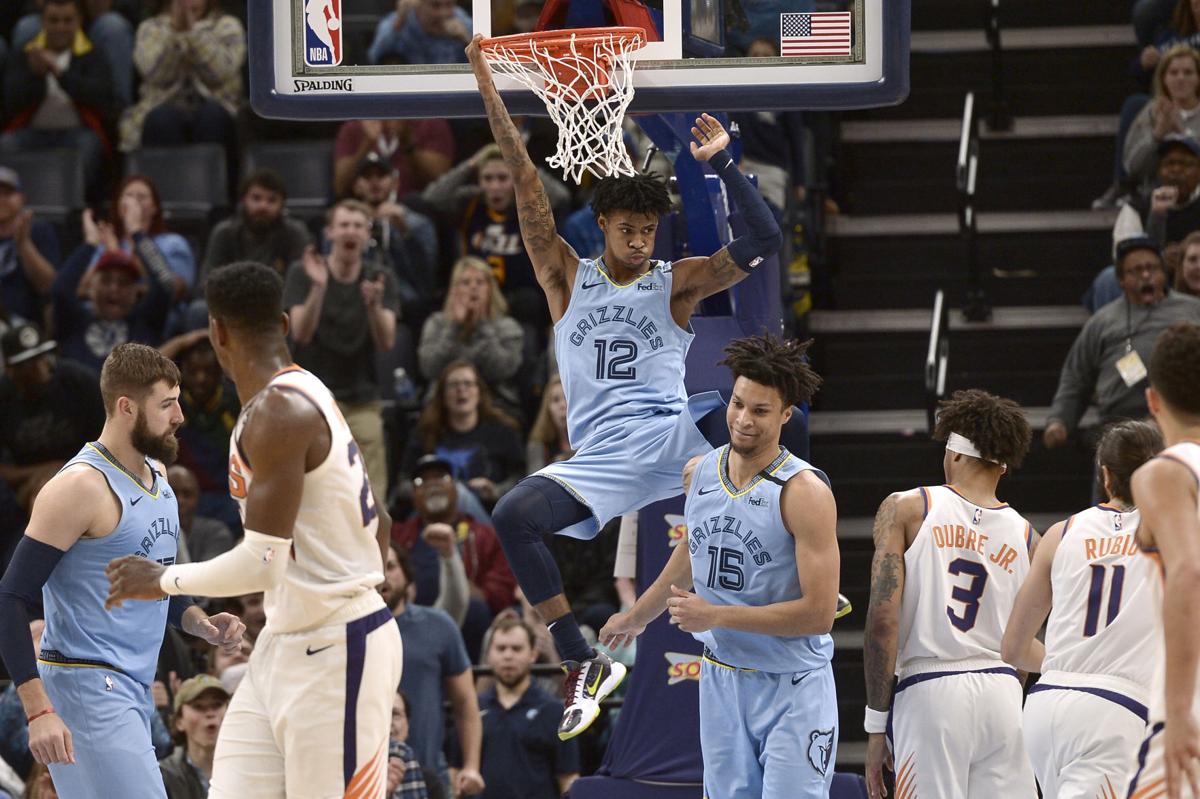 Memphis Grizzlies guard Ja Morant (12) hangs from the rim after a dunk in the second half of an NBA basketball game against the Phoenix Suns Sunday, Jan. 26, 2020, in Memphis, Tenn. (AP Photo/Brandon Dill)

Memphis Grizzlies guard Ja Morant (12) gestures to fans after an assist in the second half of an NBA basketball game against the Phoenix Suns Sunday, Jan. 26, 2020, in Memphis, Tenn. (AP Photo/Brandon Dill)

Memphis Grizzlies guard Ja Morant (12) hangs from the rim after a dunk in the second half of an NBA basketball game against the Phoenix Suns Sunday, Jan. 26, 2020, in Memphis, Tenn. (AP Photo/Brandon Dill)

Teams across the league paid their respects with the violations, some also coming in the eight-second variety, following the untimely death of the future NBA Hall-of-Famer (who donned No. 8 and No. 24 in his career) and eight others (including his 13-year-old daughter, Gianna) in a Sunday morning helicopter crash in the hills surrounding Calabasas, California.

Standing ovation as Ja Morant runs out the 24-second shot clock in honor of Kobe Bryant and Gianna. Then Ricky Rubio picks up an eight-second violation. Then, more cheers after a man holding a Kobe jersey is shown on the Jumbotron pic.twitter.com/m6c3AiSu0e

Morant scored 14 of his team-high 23 points in the fourth frame, adding eight assists, five rebounds and just three turnovers with 8-for-18 shooting.

“Growing up, AAU, 8 years old, that's who I watched,” Morant told reporters after the win, when asked about Bryant. “Lakers versus Celtics. Shoot, I feel like every kid – when you were young, if you had anything to throw in the trash – you would shoot it and say, 'Kobe!'”

The Grizzlies, now 22-24 and still clinging to the Western Conference 8-seed, needed all 23 from Morant, as Phoenix got 36 points from former Kentucky star Devin Booker, 27 points from Kelly Oubre Jr. and a double-double (17 points, 15 rebounds) from Deandre Ayton.

His performance follows a 16-point, 12-assist effort against the Detroit Pistons last Friday, a 125-112 road win, and comes four days after NBA All-Star voting from fans, coaches and players returned with him nabbing the seventh-most votes for all Western Conference guards – just ahead of Oklahoma City's Chris Paul and Golden State's D'Angelo Russell.

Ja Morant makes passes like this all the time. It's wild. A Mahomes style sidearm bullet crosscourt through traffic, no problem, hit the open 6-11 sniper. pic.twitter.com/hJLY3QdQ8Z

Last Friday, The Lexington Herald-Leader and its award-winning columnist, Mark Story, announced that Morant was one of 10 individuals named as a finalist for the prestigious annual “Sports Figure of the Year” award for 2019.

Chosen by media from across the Commonwealth and using a wide swathe of criteria, Morant is the second figure in Murray State history to crack the top-10, as former Racer football coach Houston Nutt finished fifth in overall voting in 1995.

Following a two-game stint with the Shangxi Loongs in the Chinese Basketball Association, former Murray State Racer point guard and 2015 NBA lottery pick Cameron Payne is back in the G-League – acquired by the Texas Legends on Saturday.

Speaking of the G-League, another former Murray State Racer – Isaiah Canaan – is rolling.