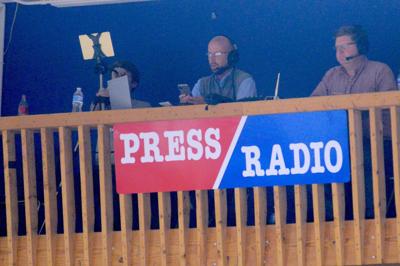 LEXINGTON – A familiar voice will have a wider audience these next two weeks.

Eric Chumbler, who does play-by-play for McCracken County’s various sports teams, will also be calling half of the KHSAA state basketball tournament, on the Sweet 16 Network, replacing the recently-retired Greg Ormay, a longtime staple of the state tournament.

“I was just so head-over-heels. It was so much fun. Then, getting the call this year, saying Doug is retiring, we’d like you to take that spot indefinitely with (Eastern Kentucky University voice) Greg (Stottlemeyer), and y’all do 50-50. It’s a dream come true. It’s something that I will value as long as I’m living to do it.”

By day, Chumbler is a financial adviser. He’s also been married to his wife, Mendy, for five years and together with her for the last 15.

Navigating the full-time needs of both, as well as his part-time radio gig, is often as challenging as it sounds.

“Some weeks, it’s hard,” Chumbler admitted. “These two weeks, especially. During times like right now where the market is really volatile, it takes working a lot of hours on weekends, just so I can get away at night to cover McCracken sports. It is a 50-hour job doing that a week, usually, and I do 10-20 hours a week doing this, it can make for some long weeks. But, I love every minute of it. I wouldn’t trade one hour for the world.

“She (Mendy) is my biggest cheerleader. I could not do it without her. She and I were meant to be together. She’s my biggest fan and I’m her biggest fan. I could not do it without her support. She sits behind me every single game, just so she can enjoy McCracken County sports and me calling McCracken County sports. She misses me, especially these next two weeks, but she’s extremely supportive because she knows this is my passion.”

A die-hard St. Louis Cardinals fan, Chumbler said he emulates some of his radio style on national broadcaster Joe Buck, the son of the late Cardinals voice Jack Buck.

“I remember the 1996 World Series,” Chumbler said. “That was the first time I was really exposed to Joe Buck. I just fell in love with it (his style) from that point on. I always wanted to be a broadcaster. Falling in love with the Cardinals was simultaneous with falling in love with broadcasting in the 90s. That is ultimately where I started.”

But, it’s locally where his passion, and his microphone, resides.

“To be a part of that Region 1 fraternity, I just absolutely love it,” Chumbler said. “I would put our voices in this region with those that I mentioned, and more, against anyone in the state.”

What if a professional call came? Would he answer?

“I would love to be just up the road in St. Louis one day,” Chumbler said. “I know that is hard to come by because they have some long-tenured broadcasters who are going to be there for a while. But, if that phone call ever came, I think my wife and I would have a quick conversation to see what we could do to be in St. Louis. I’d still love to find a way to cover McCracken County sports in the offseason. I love it that much.

In his seven seasons as the voice of the Mustangs, there are several moments that stand out.

“Of the 700-plus games that I’ve been able to call in seven years at this school, there are several things I’ll never be able to forget. The softball state championship (in 2015) on a walk-off hit to win the state title. Meagan Hayden’s three-pointer last year in the district championship (against Paducah Tilghman at St. Mary) to cap off an eight-point comeback in just a matter of seconds. The very first regional boys’ basketball championship (in 2014) when (the late) Kam Chumbler (his cousin) hit the game-winner at the buzzer.

“There are so many memories that I could share. Six regional championship baseball teams that made it to the state semifinals or finals. Pinning it down to one is almost impossible.

“But, in 700 games, that first basketball season when Kam Chumbler hit that shot to send McCracken County to state was special. I think that sealed the unity of the school in the sports programs.”