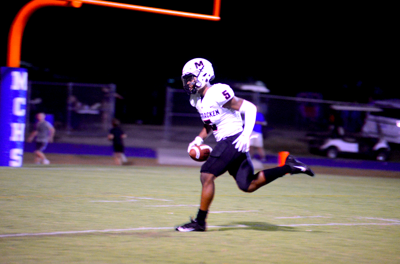 On Friday afternoon, he announced his commitment to Campbellsville University.

“Since a kid, playing rough backyard football with my older family, planting myself in front of the TV all day watching NBA and NFL, I’ve had the drive to want to make it a lifestyle,” Hayes said on Twitter. “With the decision that I’ve chose, I feel that the road to the pros is very doable. I’ve been given the chance to reunite with my oldest brother Darian and my best friend Tae’shawn at the University of Campbellsville!”

“At the end of the day, it’s all abuut the kid and the fit,” McCracken coach Marc Clark said. “I think people get caught up in going to play at this place or that place. The big thing is about going to get an education. I’m excited that Frank gets four-plus years at football. A lot of people don’t get those opportunities and I’m excited for him to get that opportunity.

“I’ve seen a lot of maturation from Frank from the time he was a sophomore to his senior year. Everyone could tell frank was a good athlete. Having arguably one of the best single seasons from a receiver who’s played in the state of Kentucky, we’re really going to miss him.”