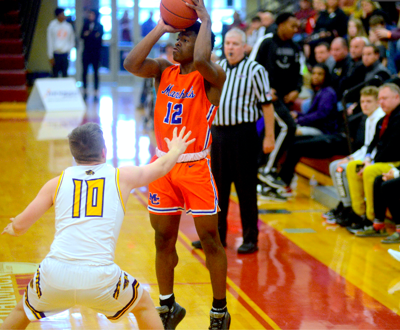 Zion Harmon will be staying in Kentucky to play college basketball.

The Hilltoppers had put on a full-court press in recent weeks, with WKU coach Rick Stansbury, as well as a pair of assistants, in attendance at Murray State’s CFSB Center for Marshall County’s First Region tournament opener, a 79-45 win over Graves County, as well as its 43-42 loss to McCracken County in the championship game.

“I’m ready to get this show on the road at the next level,” Harmon said in a video released to social media.

He averaged 25.4 points and 3.3 rebounds a game for the Marshals (23-11), after a KHSAA ruling and subsequent legal battle kept him on the bench for his sophomore season, after transferring from Adair County — where he notched 32.7 points and 3.3 rebounds as a freshman. Before that, Harmon spent his eighth-grade season at Bowling Green, scoring 16.8 points a game for the Purples.

There was speculation that Harmon might reclassify to the class of 2020 and move on right away to WKU, however he seemed to squash that after the Marshals’ loss to McCracken in the First Region title game.

“We’ll be back next year,” Harmon told The Sun on March 8.

Murray State, Seton Hall, Maryland and Kansas were also in his top five. WKU posted a 20-10 record this season.