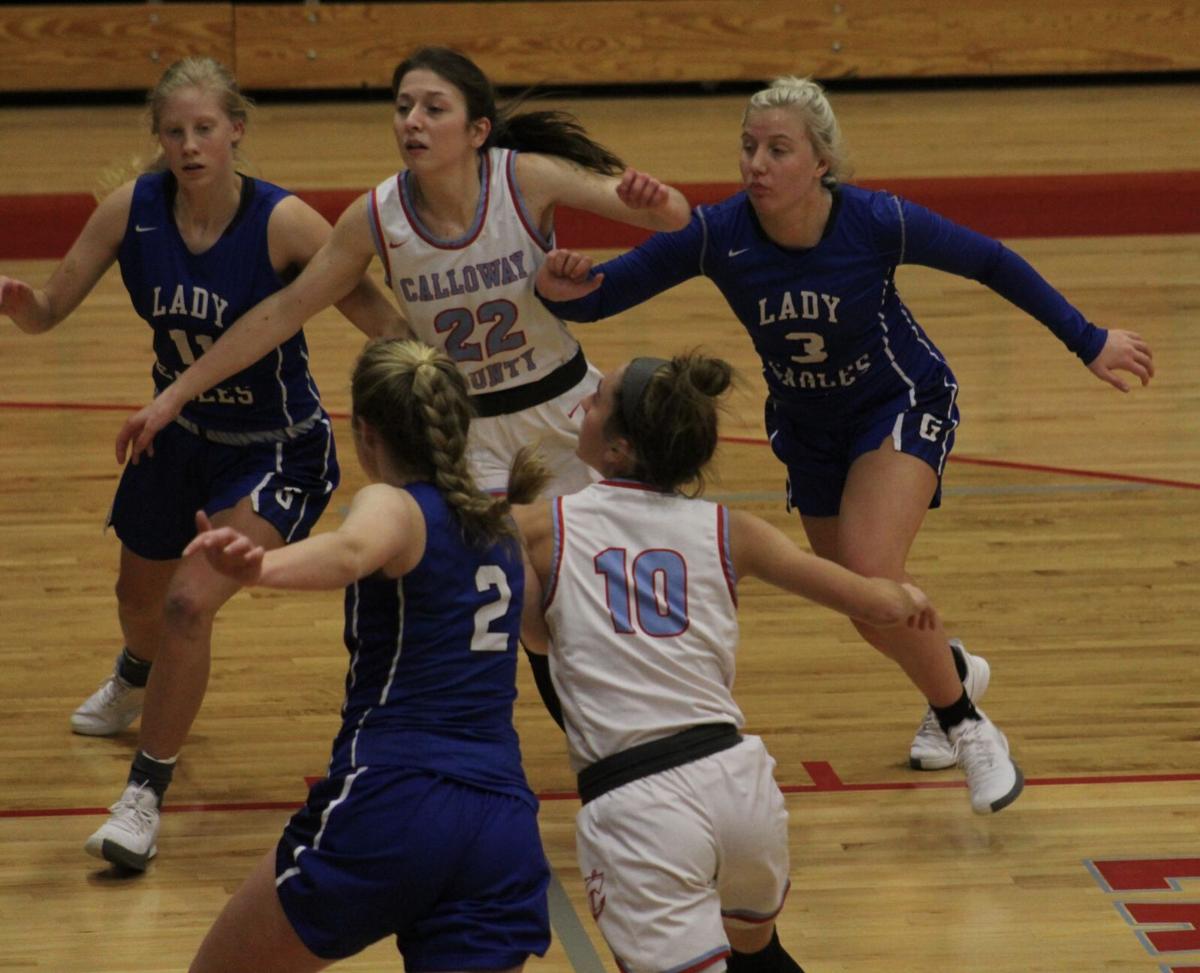 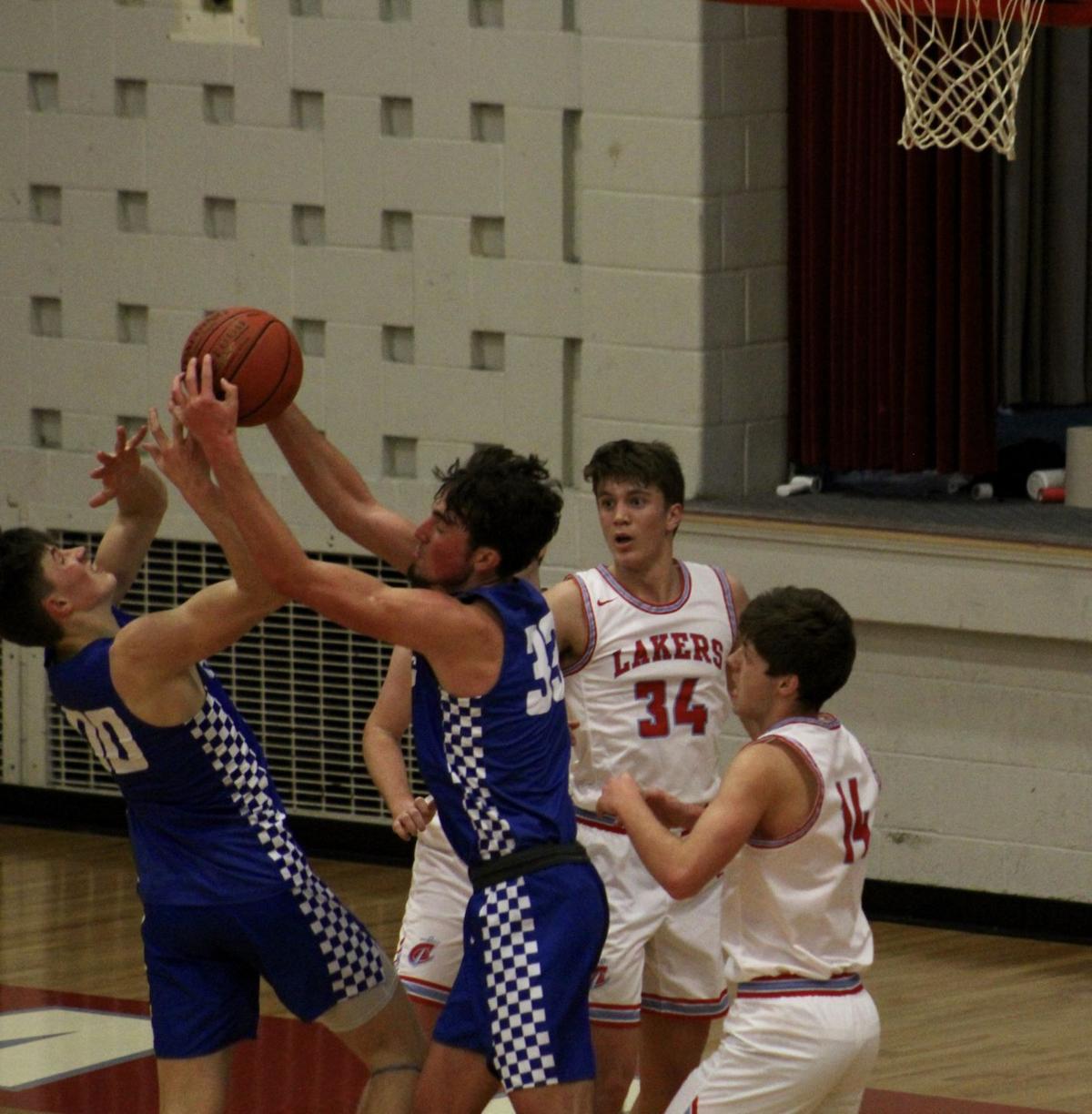 Above left: Graves County senior forward John Ben Brown (33) pulls down a hard-fought rebound during the second quarter of action on Tuesday night. Brown finished the night with 14 points and 13 rebounds in the Eagles’ 53-48 win over Calloway County. Above right: Graves County guards Nealey Jackson (3) and Anna Whitaker (2) and forward Avery Myatt (11) crash the boards during a free throw attempt on Tuesday night.

Above left: Graves County senior forward John Ben Brown (33) pulls down a hard-fought rebound during the second quarter of action on Tuesday night. Brown finished the night with 14 points and 13 rebounds in the Eagles’ 53-48 win over Calloway County. Above right: Graves County guards Nealey Jackson (3) and Anna Whitaker (2) and forward Avery Myatt (11) crash the boards during a free throw attempt on Tuesday night.

Following a road win against McLean County on Saturday afternoon, the Lady Eagles took down Calloway County in convincing fashion on Tuesday night, defeating the Lady Lakers 50-30 at Jeffrey Gymnasium.

With a 4-0 record under his belt, first-year head coach Lyndon Dunning laid the groundwork for continuing his team’s early success.

“We’ve got to stay humble,” Dunning said. “We have to keep a one game at a time mentality, because the first time you look ahead and forget about who’s your next opponent, that’s when it’ll come back to bite you.”

Dunning added that although the Lady Eagles’ bench has lost a big post threat in Avery Thompson, he still believes he has a loaded roster.

“I think our depth is a weapon not a lot of teams in this region have, even with the loss of Avery Thompson. I want to dedicate tonight’s win to her for how she’s handled things and for what a great kid she is.”

The Lady Eagles are expected to be without Thompson for the remainder of the season after she suffered a torn ACL over the weekend.

Graves County controlled the tempo early on Tuesday night, playing the game at their pace while forcing a multitude of missed Lady Laker shots in the paint.

In the second half, it was all Graves County. Graves County outscored Calloway County 17-2 in the third quarter including a 13-0 run to finish the frame.

Junior guards Ellie Carter and Nealey Jackson added six points apiece in the second half, as the Lady Eagle defense swallowed up the Lady Lakers, forcing a team total 18 turnovers.

Following Jackson’s 15 point, six rebound effort, Dunning had nothing but praise for his starting shooting guard.

“Nealey’s been battling through some things, but she’s been a positive attitude for our team the whole year,” Dunning said. “She knocked down a huge three and did so many other things for us tonight.

“I told the girls at halftime, ‘Play like Nealey, and we’ll win this game.’ ”

Picking up the first win of the season is always an enjoyable feat.

And when you do it as a team effort, that’s just the icing on the cake.

Davis led the team in scoring with 15 points including three triples, while Brown picked up his first double-double of the season, scoring 14 points and pulling down 13 boards.

Following the win, Brown said he went into the matchup with the Lakers knowing he had to hit the boards.

“I knew going into tonight’s game that the winning factor was going to be rebounding,” Brown said. “(Calloway) is a tall team and I knew I had to come down with (rebounds) if we were going to win. I just went in with the mindset that I’ve got to get that ball.”

In addition to Brown and Davis’ big nights, the Eagles got an increase of production from their younger guys, as freshman guard Lukas Pigg scored five points and dished out six assists in his first varsity start, and junior forward Noah Jones added four points and four rebounds off the bench.

With win No. 1 of 2021 in the books, Graves County head coach Josh Frick said he was proud of his team’s all-around performance on Tuesday night.

“It was a total team effort,” Frick said. “It wasn’t always the prettiest thing but we had guys step up. I thought we really competed hard and made really good, winning plays down the stretch. We’re just trying to piece things together right now, it’s been an interesting year so far but I’m proud of how our guys came out and fought and competed tonight.”