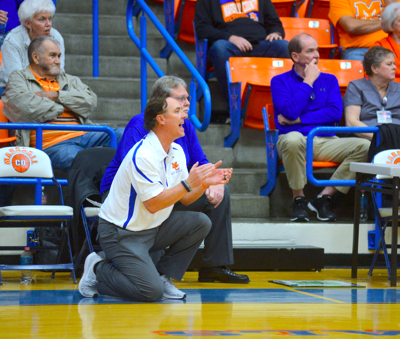 AW: Looking at this Henderson County team, especially down the stretch, how have the Lady Colonels changed the most since playing Marshall in January?

KP: They have become more balanced on offense, relying less on senior Emilee Hope. Hope is still the main offensive threat and one of the best 3-point shooters in the state, but the growth of junior guard Sadie Wurth as an offensive weapon has been important in Henderson County’s success the last half of the season. Wurth, who was a starter at Webster County as a sophomore, has taken on an expanded role late in the season. Her scoring average has climbed to 10.9 points a game and she was the most valuable player on the floor in Henderson County’s 66-49 win over Madisonville in the Second Region final when she scored 17 points.

AW: Emilee Hope is the leader of the pack in Henderson, but what about the supporting cast? Who else should Marshall County fans keep an eye on?

KP: Beyond Wurth, freshmen Graci Risley and Jarie Thomas have become more of a factor in the Lady Colonels’ rotation. Risley is another 3-point threat, while Thomas gives Henderson County more of an inside presence off the bench. Kaytlan Kemp isn’t a big scorer but she’s a pesky defender, much like Wurth, who can rattle ballhandlers with her quickness.

AW: What keeps Henderson from being a one-and-done in the state tournament this year? Who or what is the X-Factor?

KP: The Lady Colonels’ experience in the state tournament is important, especially in a first-round game. This will be the fifth state tournament game for Hope. Nine members of this year’s team saw action in last year’s first-round loss to North Laurel in Rupp Arena. With seven trips to the Sweet 16 in the last eight years, Henderson County’s coaching staff knows all of the ins-and-outs that comes with participating in the state tournament and that helps make the pregame routine as normal as possible.

AW: Do you have a prediction for this game?

KP: There’s no doubt that both teams are better than they were in early January, but Henderson County has prepared for this with a challenging schedule that included top teams from Indiana as well as three other teams that in the Kentucky state tournament field. The Lady Colonels gained confidence from their 14-game winning streak late in the season. If they can keep Halle Langhi in check inside, Henderson County will take an 8-point win.