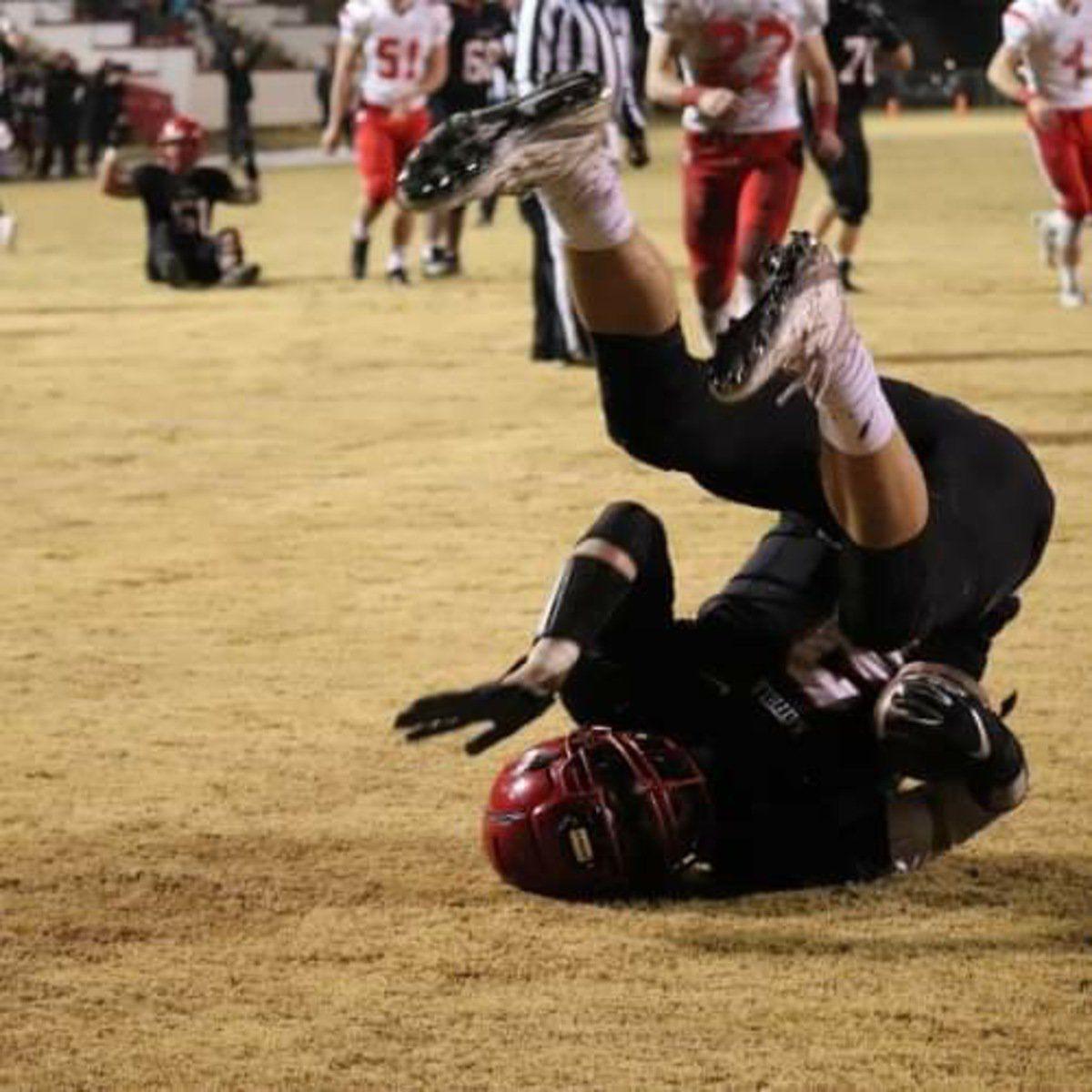 Kade Neely stumbles backward into the end zone on his 11-yard touchdown catch in the second quarter of Mayfield's 35-7 win over Beechwood on Friday night. 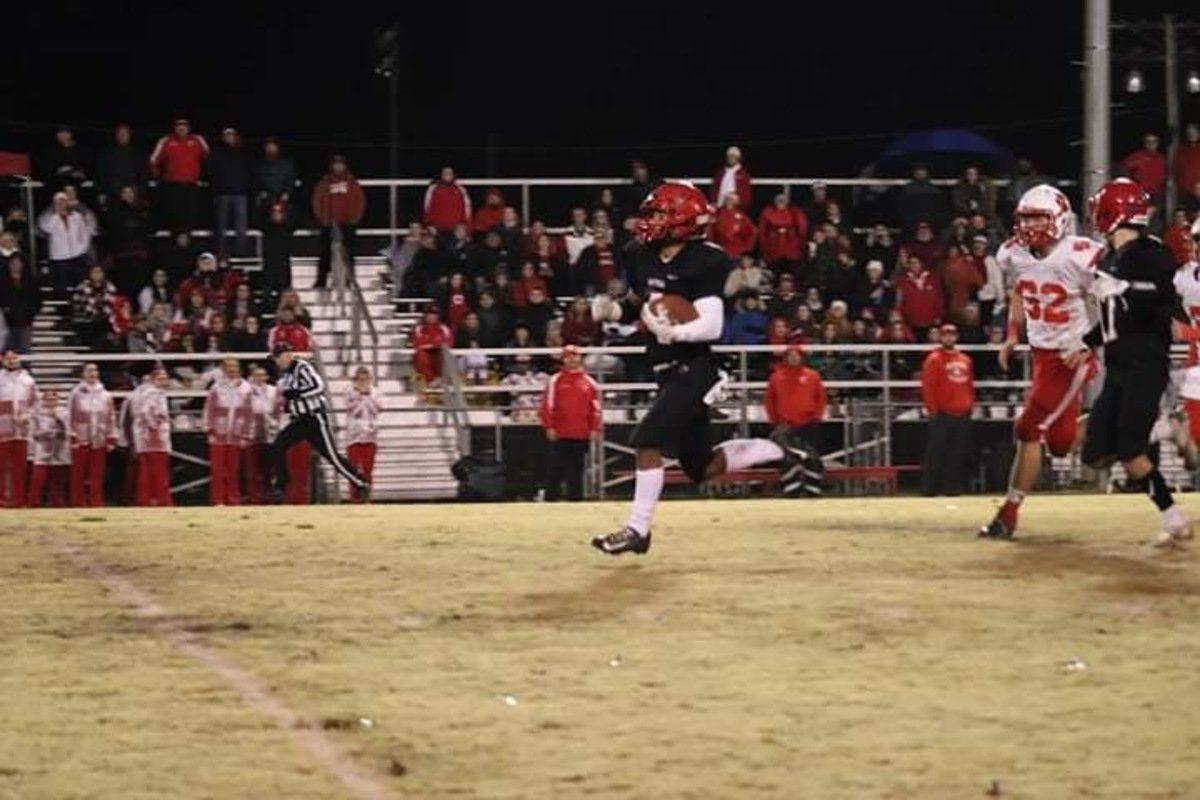 Kylan Galbreath races to the end zone on one of his three touchdown runs in Mayfield's 35-7 win over Beechwood in a Class 2A semifinal on Friday at War Memorial Stadium. The Cardinals will play Somerset at noon (CT) next Saturday in the Class 2A championship game at Kroger Field in Lexington.

Kade Neely stumbles backward into the end zone on his 11-yard touchdown catch in the second quarter of Mayfield's 35-7 win over Beechwood on Friday night.

Kylan Galbreath races to the end zone on one of his three touchdown runs in Mayfield's 35-7 win over Beechwood in a Class 2A semifinal on Friday at War Memorial Stadium. The Cardinals will play Somerset at noon (CT) next Saturday in the Class 2A championship game at Kroger Field in Lexington.

MAYFIELD -- The field at War Memorial Stadium was well-chewed up after Mayfield's 35-7 win over Beechwood in a Class 2A semifinal on Friday night.

Nobody in a dark uniform, no coach with a bird on his hat and nobody in the larger section of bleachers -- least of all Kylan Galbreath -- had any complaints about it, either.

Galbreath did most of that damage, running 17 times for 252 yards and three touchdowns, including a pair of 80-yard trips to paydirt -- really, pay-mud, on this particular evening -- for the Cardinals (13-1), who play Somerset (13-1) at noon (Central Time) next Saturday at Kroger Field in Lexington for a Class 2A title. The win was Mayfield's 900th all-time, as the Cardinals became only the fourth school in America to reach as many wins.

"We knew their defense was a pretty good run-stop defense," the junior tailback said. "So, (Mayfield offensive coordinator) coach (Stephen) Hatchell told me when I get the ball, don't try to cut or anything, just run hard every play. I did it and it worked."

On its first possession, which has become the norm lately, Mayfield struck.

Jayden Stinson connected with Kade Neely on a 79-yard pass-and-catch with 10:12 left in the first quarter.

Two possessions later, Galbreath broke free on the first of his 80-yard touchdowns, and after Micah Haley's second extra point of the evening, the Cardinals had a 14-0 advantage with 6:36 left.

Stinson and a wide-open Neely connected again on a 11-yard strike. With 7:40 until halftime, Mayfield led 21-0.

Beechwood quarterback Cameron Hergott orchestrated the Tigers' response on their only scoring play of the night -- a 41-yard throw to Parker Mason on fourth-and-6 -- to put his team on the board. With 3:19 left in the half, it was 21-7.

That score would hold into the break.

Galbreath's 10-yard run with 9:04 left in the third quarter and his second 80-yarder with 7:08 left in the game would cap the scoring.

The question was posed to Mayfield coach Joe Morris earlier in the week about what, if anything, the Cardinals' coaching staff would need to do to prevent a let-down a week removed from a 58-14 shellacking of Edmonson County on that same field.

After emphasizing that it wouldn't be the case, the Cardinals showed it on the field -- thanks in part, many said, to the team's best week of practice all season.

"What an effort by our guys," Morris said. "Defensively, in the first half, we played just amazing, giving our guys short fields. Defensively, that's the best we've played all year."

The unit that acted as the Cardinals' unsung heroes was the offensive line, which limited negative plays and kept Stinson upright behind the line of scrimmage the entire evening.

"This offseason, we had so many question marks," he said.

"I think they've done nothing but fill those spots and lived up to expectations. They've really done what we've asked of them, and that's all we can do."

Mayfield running back Kylan Galbreath on the Cardinals return to the Class 2A title game.