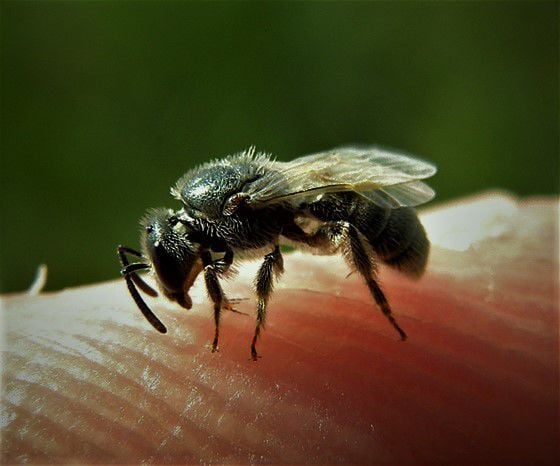 A sweat bee lands on human skin to lap up salt, not attack, but press her (and your luck) and she’ll sting. 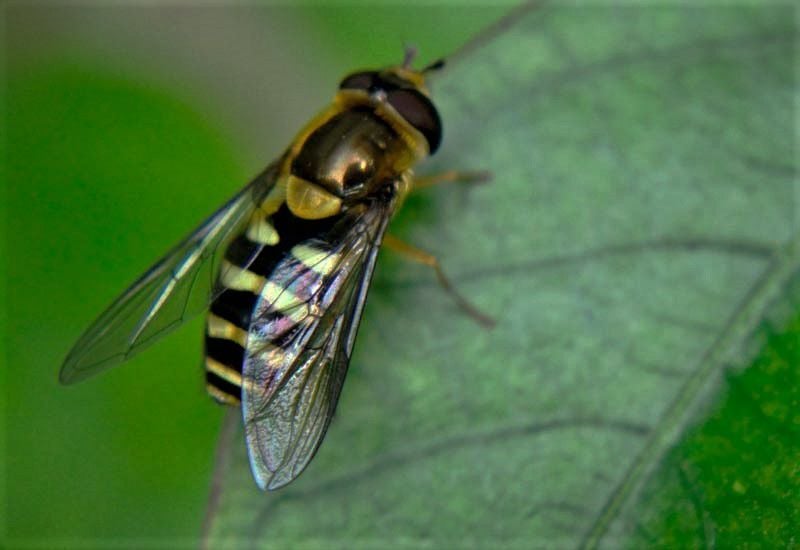 A sweat bee lands on human skin to lap up salt, not attack, but press her (and your luck) and she’ll sting.

If you don’t know the difference between sweat bees and corn flies, you just haven’t been stung enough.

Spend much time outside in summer heat and you likely will meet sweat bees, corn flies or both. These are genuine pester bugs, and some folks lump them together. Yet, they are more dissimilar than apples and oranges, neither fruit packing any defensive venom.

Sweat bees are, indeed, a variety of bees. Some folks lump corn flies with them, calling latter sweat bees, too. But, nope, they are certainly not the same animal.

Sweat bees are exceedingly small bees, averaging maybe a quarter inch long, of many species. There are reputedly more than 1,000 sweat bee species in America.

There is diversity in all these species, but most that are commonly seen are mainly black and, though too small to be clearly seen, are covered with fuzzy bristles like the exterior of a far larger bumblebee.

The sweat bee has two pairs of translucent wings like other bees and wasps. And female sweat bees each pack a stinger in the business end of her abdomen or butt section. Each has venom production to fuel that tiny stinger.

Sweat bees help us by being plentiful pollinators. They feed on pollen and plant nectars, but pollen of various plants gets stuck in the bristles of their fuzzy outer covering. As they move about while feeding, they cross-pollinate the plants as they make their rounds.

That is pretty handy of them. But here is the downside. These bees’ diet is short on salt and they crave it when available. When a human is active out in summer heat, the sweat that dampens his or her skin is full of salt, attracting the aptly named sweat bees like a magnet.

The bees smell or taste the salinity in perspiration when in proximity to a human, and their reaction is to light on the massively larger being and get a sip of the sweat.

That’s no problem until the human feels a tickle on the skin and swats it or until the person bends an elbow, presses an arm against their side or makes some other movement that traps or presses against a miniature bee stopped for a sweat slurp.

If the sweat bee that is suddenly restricted or squeezed is a female, she can poke out a diminutive stinger and administer the slightest little dose of venom. It does not pack a wallop, but depending upon a person’s level of reaction, it smarts.

A sweat bee sting does not measure comparably with that of, say, a wasp or even a honeybee, but you would rather avoid it if you can. One learns not to put the squeeze on a sweat bee if its presence is recognized.

Some sweat bee species are solitary, each female typically nesting in a little hole in the ground. She hatches out offspring there through solo efforts. Other species are said to be eusocial, which mean a small colony of them may live in and work from the same nest.

It is claimed that some colony-living sweat bees will even defend their nest, possibly stinging intruders. I’ve never observed the likes of this, but stings from sweat sippers are routine.

And then there are corn flies, which some people don’t know from sweat bees. The corn fly, also named a hover fly, is precisely a fly and not a bee. Accordingly, it has a single pair of wings and not two pair.

The corn fly also is about a quarter of an inch long, but this insect is typically yellow and black banded (sort of those bumble bee colors) with prominent dark eyes. The coloration is similar to that of a yellowjacket wasp, but the corn fly is way, way smaller.

Behavior gave this bug the alternate name of hover fly. It is like a tiny helicopter in that it often just hovers in place, but it can move in any direction with great agility. Sometimes it will hover around a human until it seems time to cautiously land … for a drink.

Corn flies, like sweat bees, are attracted to us because they also crave the salt in our sweat. They, too, feed on pollen, but our salty sweat apparently is a special treat for them.

A saving grace is that corn flies do not have any stinger equipment or any venom that can be injected into us. They lap at the sweat on our skin, but they cannot sting, bite or otherwise assail us. If they land to sip a salty drink, a slap at the tickle source won’t get you a painful, defensive injection.

The worst thing about these hover flies is that sometimes they will collect in a random formation and hover in front of your eyes as they await a serving of sweat. They will not hurt you, but they will annoy you incidentally.

Corn flies like open areas and they are especially abundant around agriculture fields, especially corn and soybeans. For the minor aggravation they may perpetrate, they actually do some positive work. Larval corn flies do eat aphids that can damage crops.

A minor irritation of summer, being bugged by sweat bees and/or corn flies is not any sort of hot weather deal breaker. Both are easy enough to tolerate, but it is helpful to recognize which one you can squash on your skin without consequences.