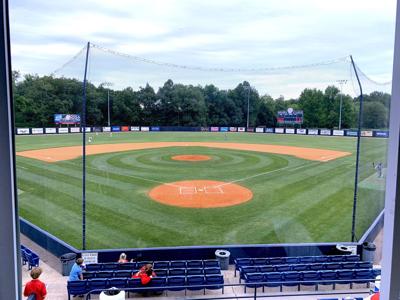 With the remainder of high-school basketball season and the entirety of spring sports in limbo, an unpleasant effect of the ongoing COVID-19 pandemic, the Ohio Valley League, a wooden-bat summer baseball league with teams throughout western Kentucky — including in Paducah and Fulton — still plans to start its season on time, on June 1.

“We’ve been meeting, the Brooks Stadium Commission and the Chiefs … with everybody involved on a weekly basis about promotions and different things we’re doing,” Paducah Chiefs general manager Greg McKeel said Wednesday. “The bottom line is our team is in place, everybody’s signed, our host families are in place, we’re selling season tickets again, we’re doing program ads, so we’ve pretty well got everything in place for the season to start.

With only a two-month season to work with, in the first place, McKeel said he doesn’t believe the league will go with a shortened schedule. As the summer progresses, there are typically rainouts to reschedule, but nothing on as large a scale as a full season.

“There are a lot of things, there, that would have to fall right for us to be anything but a full season, in my opinion,” McKeel said. “Right now, our focus is that we’re going to stay the course and we’re going to get this thing done.”

The teams in the OVL feature both collegiate players and recently-graduated high-school seniors, so this year — should the season start on time, or close to it — the summer-ball slate may be more important than it has been in the past, since the NCAA canceled all of its spring activities, including the College World Series.

“They’re real anxious for these kids to play, since they can’t play this spring,” McKeel said, describing interactions he’s had with the coaches of the players on the Chiefs’ roster in recent weeks. “Even more so than ever before, they want them coming here to play, because they want them getting better and getting their skills honed, so that they’re ready to come back in the fall and spring and play for them again next year. It’s real important.

“Truthfully, to have coaches call at this time of year and check on our season, and what we’re doing with it, is probably a first.”

McKeel said the impact will be felt in the community, too, if or when the season begins.

“People are going to be starved for baseball, in my opinion, because they’ve missed the spring season and Major League Baseball is not going. I think this will be a big thing for Paducah and the area, if we can play this year. I think that will increase our attendance. I think it’s going to be huge.

“The other thing, too, is people concerned about travel. I’m sure that will wind down some, but they can stay home and stay local to see something without having to travel to St. Louis or to Cincinnati, or to some of these other places, to see something.”

Coaching staff finalized for 2020Assuming the season starts on time, McKeel said Joe Hall will return for his sixth season as the Chiefs’ skipper.

Joining him will be second-year hitting coach Cameron Gudgell, who spent the 2019 high-school campaign as Ballard Memorial’s baseball coach before moving on to take a teaching job in Florida.

The newest face, though, is a familiar one.

MacArthur “Mac” Rogers, 58, will be with the Chiefs full-time this summer, after coming in last year to help some of the pitching staff with mechanical issues. Rogers, a Wichita, Kansas, native and a 31st-round pick of the Atlanta Braves in 1983, played four professional seasons with three stops in Durham, North Carolina, with the Durham Bulls in 1984, 1985 and 1986.

“We’re excited about that,” McKeel said. “He’s excited about doing it. He’s a little bit semi-retired, so he’s got time to spend on it.”

While the entire team has not yet been announced, there is a local player slated to play for the Chiefs this summer.

Right-handed pitcher Brady Betts, who graduated last summer from Paducah Tilghman, is a freshman at the University of South Carolina Upstate.

He is one of Chris Johnson’s six seniors from the Class of 2019 to go on and play collegiately.