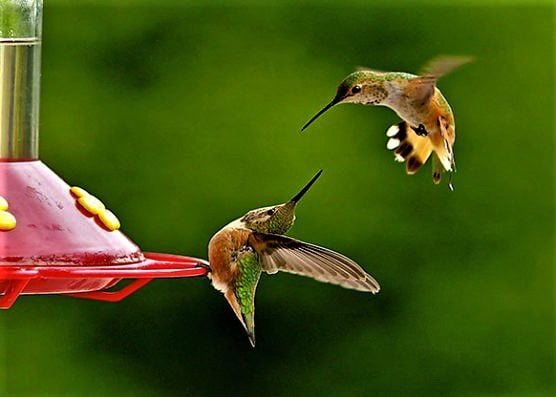 It is common for ruby-throated hummingbirds drawn to the same feeder to show territorial aggression, usually in one chasing away others. 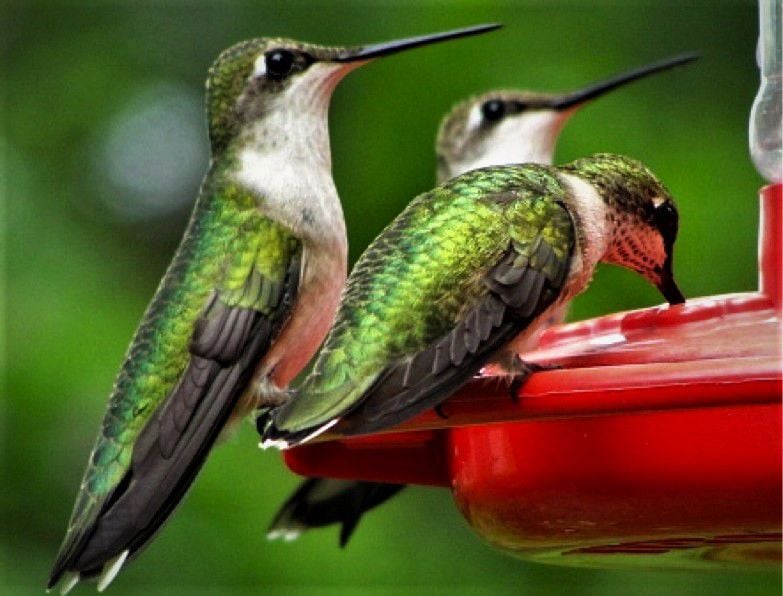 They are not all selfish, however, some share without signs of hostility.

If sharing is caring, hummingbirds apparently do not care.

A reader recently checked with me about a perceived problem that I have heard bemoaned plenty of times. It seems that the sugar water feeder that she has provided for her neighborhood hummingbirds is getting adequate attention from the tiny fliers. Her issue, however, is that one surly bird won’t let any of the others dine there.

The little bitty bully chases away any other that would dare hover and sip the sweet solution from the feeder.

As long as people have known of and practiced the hobbyist pursuit of attracting hummingbirds and feeding them with homemade “nectar,” they have been finding out that some of those tiny birds are just jerks. Some simply will not cooperate and share with others. Seems they want to hog the feeders for themselves.

When you get into feeding hummers in the eastern U.S., what you hope to attract is the ruby-throated hummingbird. That is the sole native nesting hummingbird here.

The ruby-throated hummer that has a ruby-colored throat is the adult male. The hummers that lack that red patch on the goozle are the same species but females, or for a time, juvenile males.

There really is not another bird species to confuse with these tiny hummers. They are only about 3 inches long, and a skinny little beak makes up about 20% of that. While the adult males have the ruby coloration on the throat and upper breast, all are a pretty emerald green on the upper body and a buff of white below.

They have tiny feet and short legs that are difficult to see without a good look, convincing some people that hummers are legless and must fly all the time. They aren’t, and they don’t.

Some of the most amusing behavior of ruby-throats is the manner in which they fly. They can zip around at a fast rate of speed; they can hover in one place, or they can move precisely in any direction sort of like a miniature helicopter.

These unique aerial skills are possible because their little wings flap at up to 80 beats per second, moving so fast that they appear only as a blur. By adjusting the angle of the wing stokes, a hummer can move up, down, forward or backward at will. The incredibly fast wing strokes give off a humming sound, like an insect on steroids, that give the hummingbird its name.

Hummingbirds are difficult to observe unless you lure them close and give them reason to be stationary at least momentarily. That is why people love to put out feeders with visually attractive red (like flowers) colors and mixtures of four parts water and one part sugar inside. Hummers will find and readily adapt to a feeder of this sort as a regular food source.

And then the problem as mentioned at the start of this writing emerges. Increasingly, one hummer will swoop in while others are trying to feed, chasing them away.

There are at least two things to which we can attribute to some of the crazy zooming and aerial ballet that goes on between ruby-throats. There is courtship behavior and there is territorial aggression.

Males will swoop playfully around the ladies of their reproductive interest. This is typically a one-on-one display early on in the mating season. It could be happening now, but I suspect some of this already is complete, some females already being bred and into the nesting activities.

The other part of this is territorial defense. Some of this is male ruby-throats staking claim to breeding territory and exhibiting to other males that they are not welcome there. Most of this is chasing and intimidating, but reputedly there are rarer instances in which two socially dominant males will be involved, and when the chased intruder will not relent, the two males may do physical battle by crashing into each other.

Another territorial conflict comes into play when a hummer, male or female, decides that a certain feeder ought to be personal property and not available to others. This, I believe, is what most people who maintain feeders see when one bird is swooping and chasing after another.

The problem here is that it is natural competitive behavior. You can’t very well chastise the bully and tell it not to act like a bird. It is what hummers do.

The good news is that, over time during a season, hummers competing for food often will begin to grow more accustomed to each other and will increasingly share at a feeder with less strife. After all, it is difficult to get a fair share of sugar water if one spends so much effort trying to chase off others. You can’t eat and bully others at the same time.

Authorities suggest that hummer-feeding folks who are troubled by territorial behavior can provide more placid dining by putting out additional feeders. Some say put them out of sight of each other, but another school of thought suggests putting feeders in clusters, even several of them within a relative few feet of each other. These say the abundance of feeding stations decreases the hostility with which bully birds seem to exhibit.

Either way, know that hummers buzzing and chasing each other in a feeding area is natural behavior. Consider just enjoying the show.