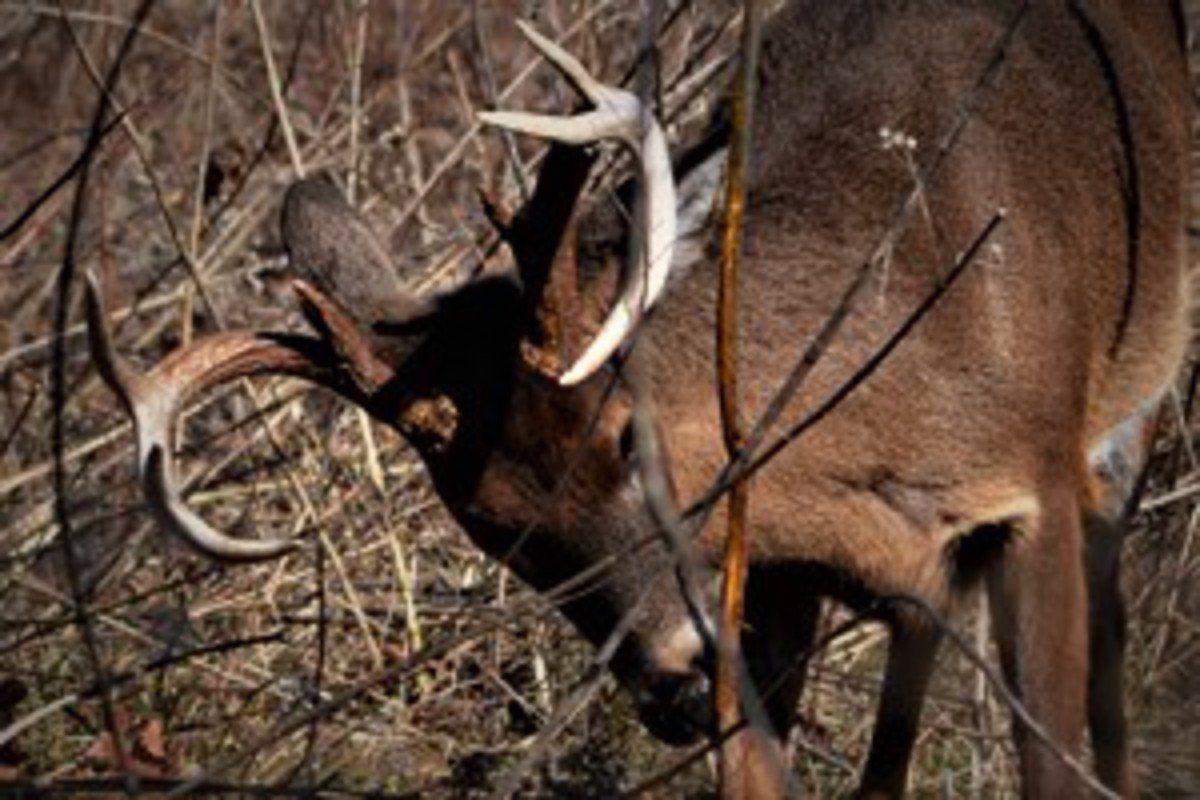 Weeks ago, a buck now ready to shed was using its antlers to thrash brush and trees, making rubs as territorial markings. 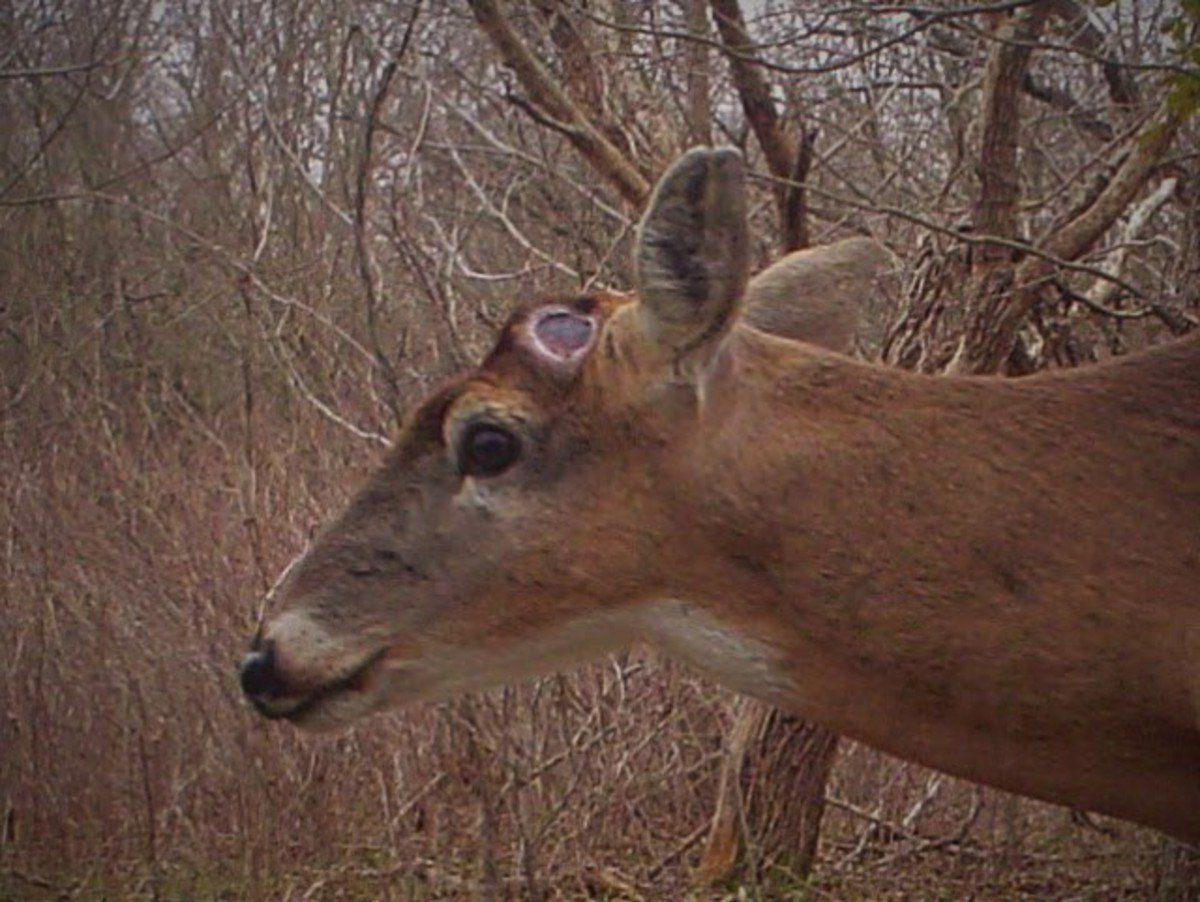 Even a bigger buck with only bare pedicels where antlers used to be seems to lack the authority it once commanded.

Weeks ago, a buck now ready to shed was using its antlers to thrash brush and trees, making rubs as territorial markings.

Even a bigger buck with only bare pedicels where antlers used to be seems to lack the authority it once commanded.

It must be a disarming feeling for a whitetail buck when first one, then the other of his antlers drop off his head.

After flaunting that un-modestly menacing male weaponry up there for about half a year, plop, plop, and the buck finds himself round-headed again. The social status that went with that bristling rack falls away as surely as does the bone, and he's again as antlerless as the does in the neighborhood.

This is the season when antlers are being shed, an annual event for male whitetails. It started for some a few weeks ago and will continue on into spring for others. The present may be approaching the peak time of antler departure for a large chunk of the deer population.

The antlers that grow and are brandished on a buck deer's head are very transitional. Time is fleeting, and so is the bone that forms up there on a buck's noggin. The antlers are very much intertwined with the physiological and behavioral part that bucks play in the whitetail breeding cycle.

What are they for? Well, antlers certainly are weapons, tools of both aggression and defense. While a buck would apply his antlers toward a predator if simple escape isn't an option, he also uses the bony beams and daggers on his head in territorial and breeding-rights combat against rival bucks.

Short of outright fighting, the antlers also serve to display social status -- size, strength and dominance of bucks initially inferred by size of antlers. If another calls his bluff, he might have to fight, but in many cases a buck can intimidate and get his way just by showing up with a rack that appears to make him cock of the walk.

This time of year, with the breeding season kaput, bucks find themselves with sagging testosterone levels. When this sexually related hormone drops, and bucks become incapable of romancing the does, a physical change comes.

As this endocrinal switch is flipped, cells begin to reabsorb calcium at the base of a buck's antlers at the pedicels, the sort of socket-like places from which the antlers grow. The antler connections to the skull weaken as the calcium leaches away.

Sometimes an antler will dislodge if a buck bumps something with it. Antlers may be jarred loose with a sudden movement and stop, as when a buck jumps a fence and lands. Given the chance, an antler grows so loose that eventually its own weight will cause it to topple.

Occasionally, both of a buck's antlers will be shed together at about the same time, but seemingly this is much the exception. It's common to encounter one-antlered bucks this season of the year. Antlers may drop days apart.

A shed antler will leave a raw-looking pedicel, the antler base that at first will be a bit bloody. The antler itself may reveal a bit of blood at the rounded base end if found soon after being shed.

A raw pedicel on a buck's head will scab over in a short while, however, and the tissues that grow to cover the base will transform to become the first sign of the new antler that will begin sprouting there in just a few weeks after the old one departs.

Most new antlers start protruding in April into May, growing rapidly at first, then slowing up to mineralize and harden into finished bone by late August to early September.

Studies have shown that older, mature bucks tend to shed their antlers the earliest, sometimes as early as mid to late December. Younger bucks, especially yearlings wearing their first set of antlers, retain their rack longer, often into March or even April.

Nutrition is another factor that is seen to effect antler loss. Bucks in prime habitats are known to retain their racks a little longer. Conversely, bucks living on poorer diets in leaner habitat tend to drop their antlers sooner.

Not surprisingly, many people covet shed antlers almost as much as those antlers that come with a buck deer attached. During the season when antlers are being dropped, some people make a pursuit of searching for these displaced headgear implements.

Antler hunting is a study in deer behavior. Where antlers are found obviously reflects where buck deer go, but also it is related to how much time they spend there.

A good number of antlers are found in feeding areas, if nothing else because antlers are more visible in green plantings, still-barren harvested grain fields and other open ground. More antlers likely are deposited (but harder to find) in thicker, overgrown bedding areas where bucks spend time recovering from the rigors of the past breeding season.

While antlers are only temporary on the heads of buck deer, they are likewise short-lived on the ground, too. Rodents soon begin gnawing away at antlers for the minerals that these bone artifacts offer. Those antlers that fall in wooded areas are rather quickly assailed by the squirrels that find them there.

Shedding antlers seems a mostly painless transition for a buck. But it must be a blow to the ego when your claim to dominance and your all-purpose poking kit wobbles, falls and sticks in the dirt. Then, maybe you seek the solitude of bedding cover even more hours of the day, practically defenseless and dethroned.