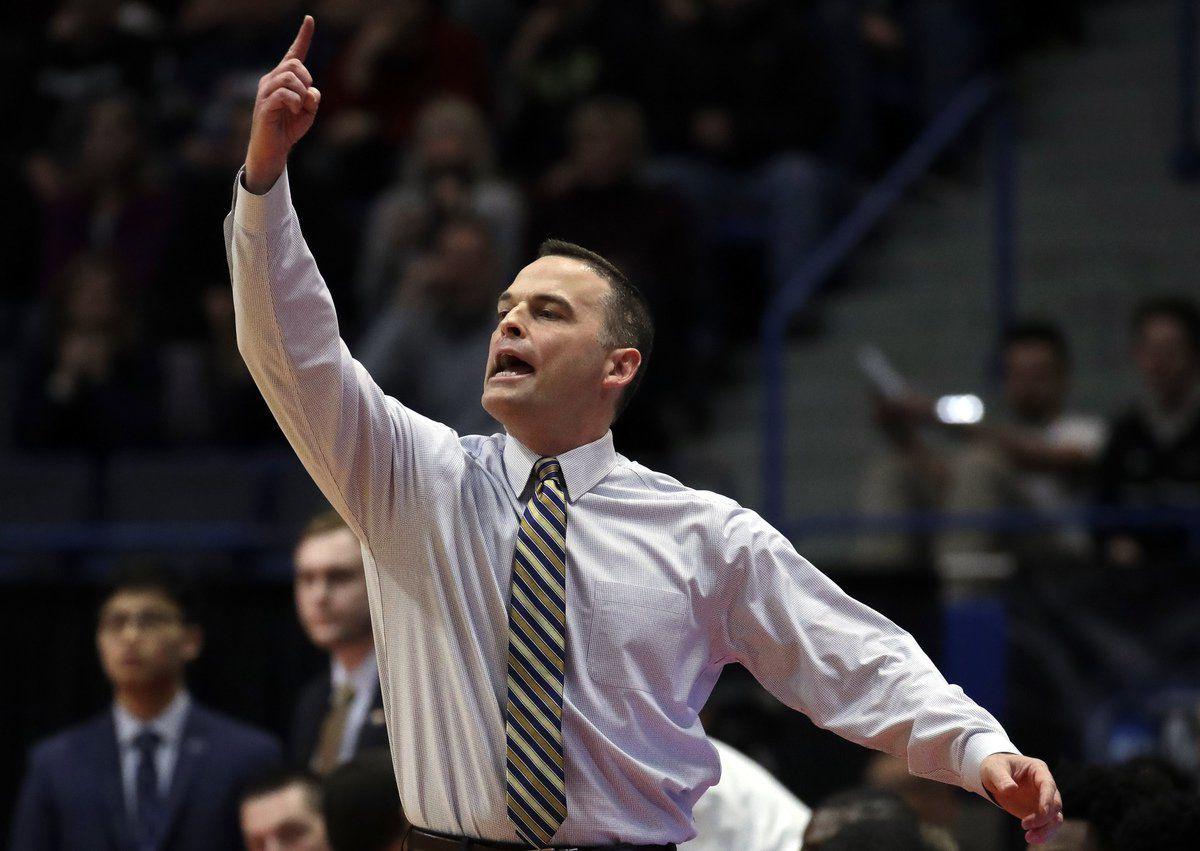 Murray State head coach Matt McMahon instructs his team against Florida State in the NCAA Tournament last March 23 in Hartford, Conn. McMahon now gets to instruct his team on a preseason trip to the Bahamas, following 10 days of extended practice leading up to the exhibition games. 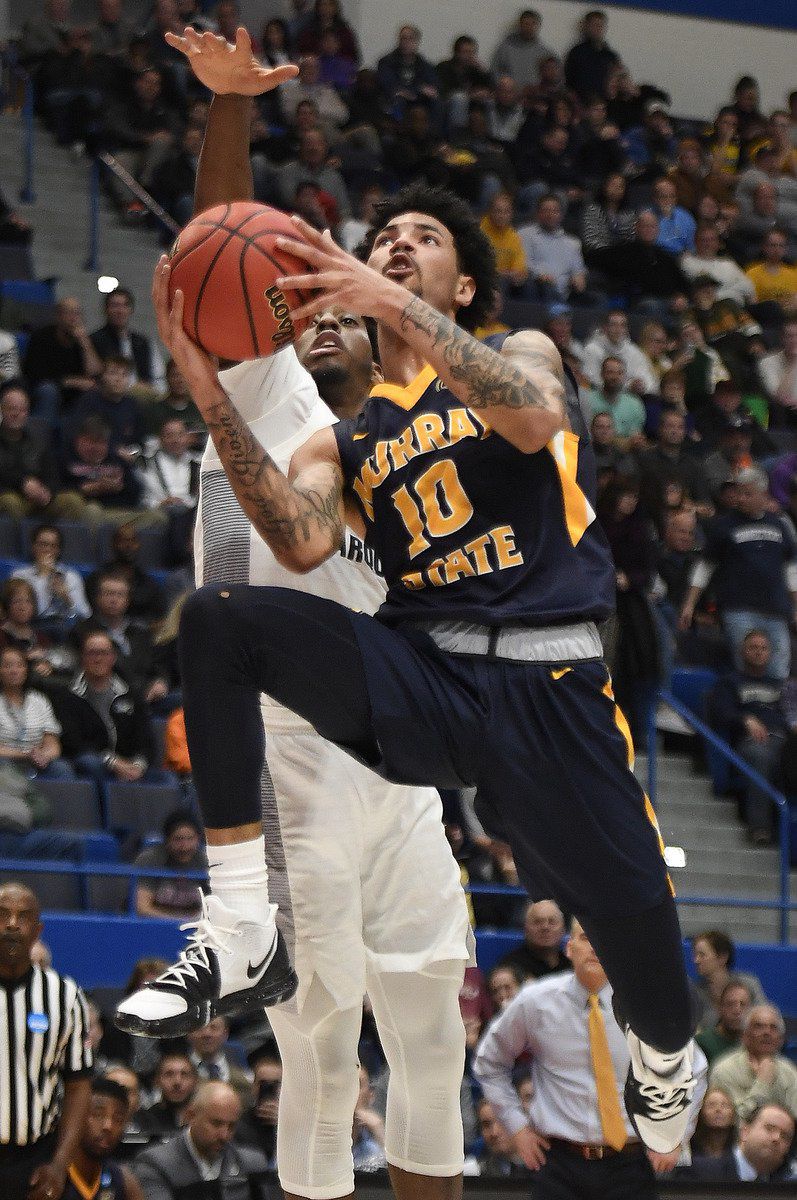 Murray State's Tevin Brown (front) goes up to the basket as Marquette's Sacar Anim defends during the NCAA Tournament on March 21 in Hartford, Conn. Brown and returning senior forward Anthony Smith are expected to be leaders heading into the 2019-20 season, which begins Friday with the Racers headed to Nassau, Bahamas, for preseason exhibitions.

Murray State head coach Matt McMahon instructs his team against Florida State in the NCAA Tournament last March 23 in Hartford, Conn. McMahon now gets to instruct his team on a preseason trip to the Bahamas, following 10 days of extended practice leading up to the exhibition games.

Murray State's Tevin Brown (front) goes up to the basket as Marquette's Sacar Anim defends during the NCAA Tournament on March 21 in Hartford, Conn. Brown and returning senior forward Anthony Smith are expected to be leaders heading into the 2019-20 season, which begins Friday with the Racers headed to Nassau, Bahamas, for preseason exhibitions.

For the Murray State men's basketball program, a preseason trip to the Bahamas comes at the perfect time. And not just because of the chance to visit beautiful beaches, gorge on all-you-can-eat seafood or take advantage of snorkeling opportunities.

No, fifth-year Racer skipper Matt McMahon and his staff understand the fluidity of their situation heading into the 2019-20 season. The graduations of OVC Defensive Player of the Year Shaq Buchanan and four-year forward Brion Sanchious -- coupled with the rapid ascent of point guard Ja Morant as the No. 2 pick in the 2019 NBA Draft -- have created a natural void of production that must be replaced.

Add in the facts that two critical cogs in senior forward Anthony Smith and freshman guard De'Quan Smith are returning to the rotation after season-ending injuries -- and six other new faces are on the team (Jason Holliday, Chico Carter, Noah Kamba, Demond Robinson, Matthew Smith, Rodriguez Thomas) -- and suddenly, there's a lot in play for next year.

So much was in flux that McMahon and Murray State officials actually sped up plans to take the overseas trip now.

"I think there's never a bad time to go to the Bahamas," McMahon said, jocosely. "But from a team standpoint, it was probably in the plans, moreso, for next year. ... We had to fast-track it to make it happen this summer.

"Thankfully, the support of (MSU President) Dr. Bob Jackson and our new athletic director, Kevin Saal, and the generous supporters we have here ... we were able to make it happen on a short turnaround."

The Racers leave for Nassau, the Bahamas' capital, today, and will face up against professional Bahamas Select teams Friday through Sunday at Kendal Isaacs National Gymnasium.

The first expectation? Try to win. The team was awarded 10 extra practice sessions in order to prepare for the trip, and McMahon notes that extra time has been critical to chemistry and evaluation.

But the second expectation? Try to have fun.

"I don't expect it to be any clinic in execution, but what I am looking for is that we continue to establish what the culture of our team will be," he said. "That we play extremely hard. That we're unselfish. And that we compete at a very high level. I think it's important to get that established right away."

The entire team will travel, but McMahon said Robinson (concussion) may not play, and specifically mentioned junior Brion Whitley (lower leg, out two weeks) and senior Darnell Cowart (pre-existing knee injury, off-season surgery) will not be playing, simply as a precaution.

The two Smiths -- Anthony and Da'Quan -- are completely cleared, and will "play a ton."

"You'll never see a platoon for me, but we will play everybody a lot of minutes," McMahon added. "Multiple combinations. Probably will decide who starts the first game on the bus ride over. Have no clue. Usually that's the first question. 'Who's your starting five?' But I have no idea. We're going to mix-and-match.

"The games, I want them to be a lot of fun. We play to win any time you put the Murray State jersey on, but we're going to play everybody and get a lot of different looks."

Every offseason, McMahon specifically targets guys he believes can transition into leaders both off and on the court.

Last year, it was Morant and Buchanan.

This time around, it's Brown and A. Smith.

"I think for us to be really good, it has to happen (with them)," McMahon said. "I think Anthony sets the tone every day. I'm challenging him to be more vocal in his leadership, but he comes to work every day and gives maximum effort in everything we do. I've never seen him take a rep off in his two-plus years here, and I think that's really important.

"I think Tevin, it's been his third year in the program now. Double-figure scorer. Guy who should be positioned and ready to be an all-conference-type player. Those two guys and their two years in the program? They're 54-11. I think they know what winning looks like not only on game day, but in your preparation in the weight room, the meeting rooms, the film sessions, off the court and how we conduct ourselves here. I think it's going to be important for them to grow and step into those type of roles."

Brown seems fully cognizant of what's being asked of him, and he said Anthony Smith's return will help.

"It's a big plus, because (Anthony's) been here just as long as I have," Brown said. "He's seen how the program's run, and he knows how to help me push the new guys get to where we need to be.