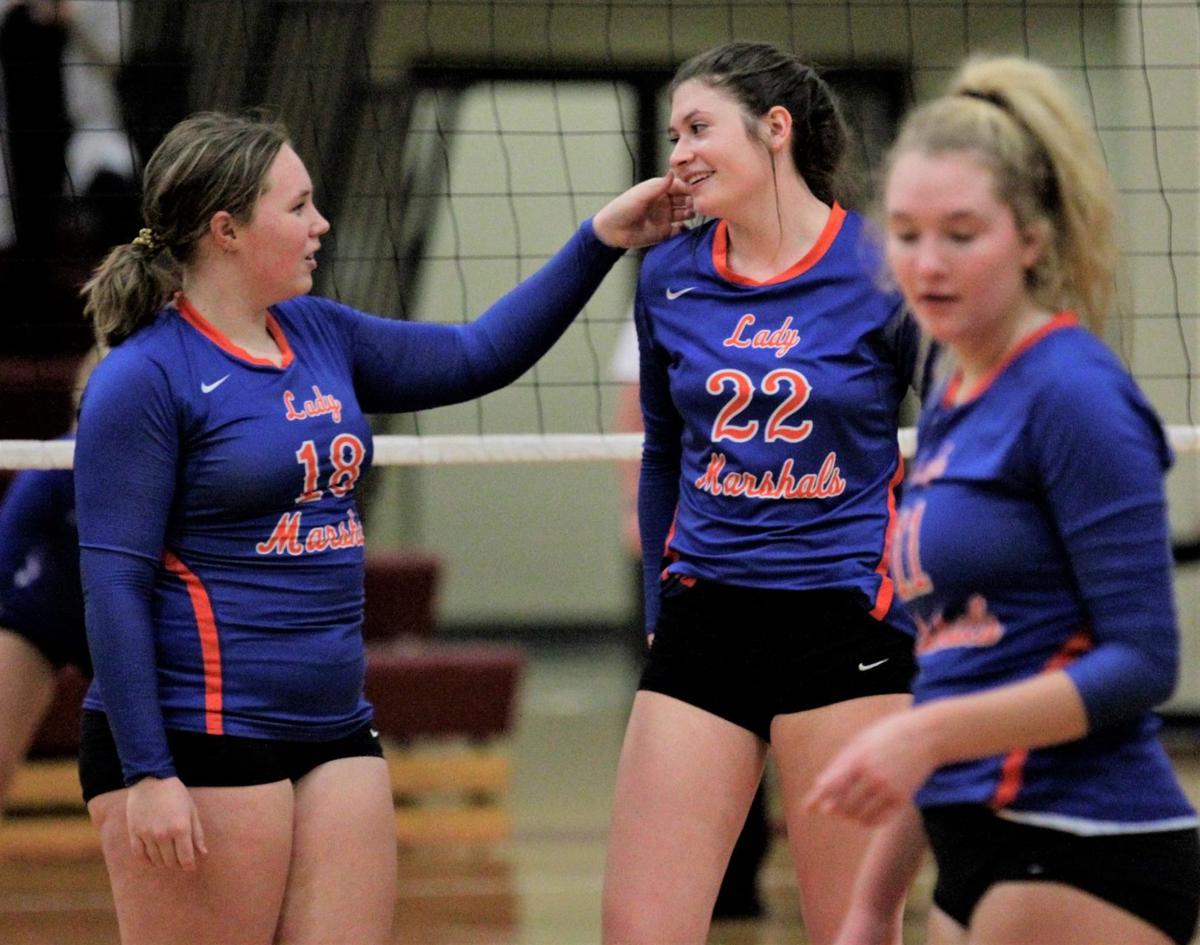 Top-15 in the state in kills, Marshall County’s Halle Langhi (22) unofficially added another 18 to her resume on Tuesday night, in a 3-1 win over Graves County to advance into the 2020 First Region semifinals against McCracken County. 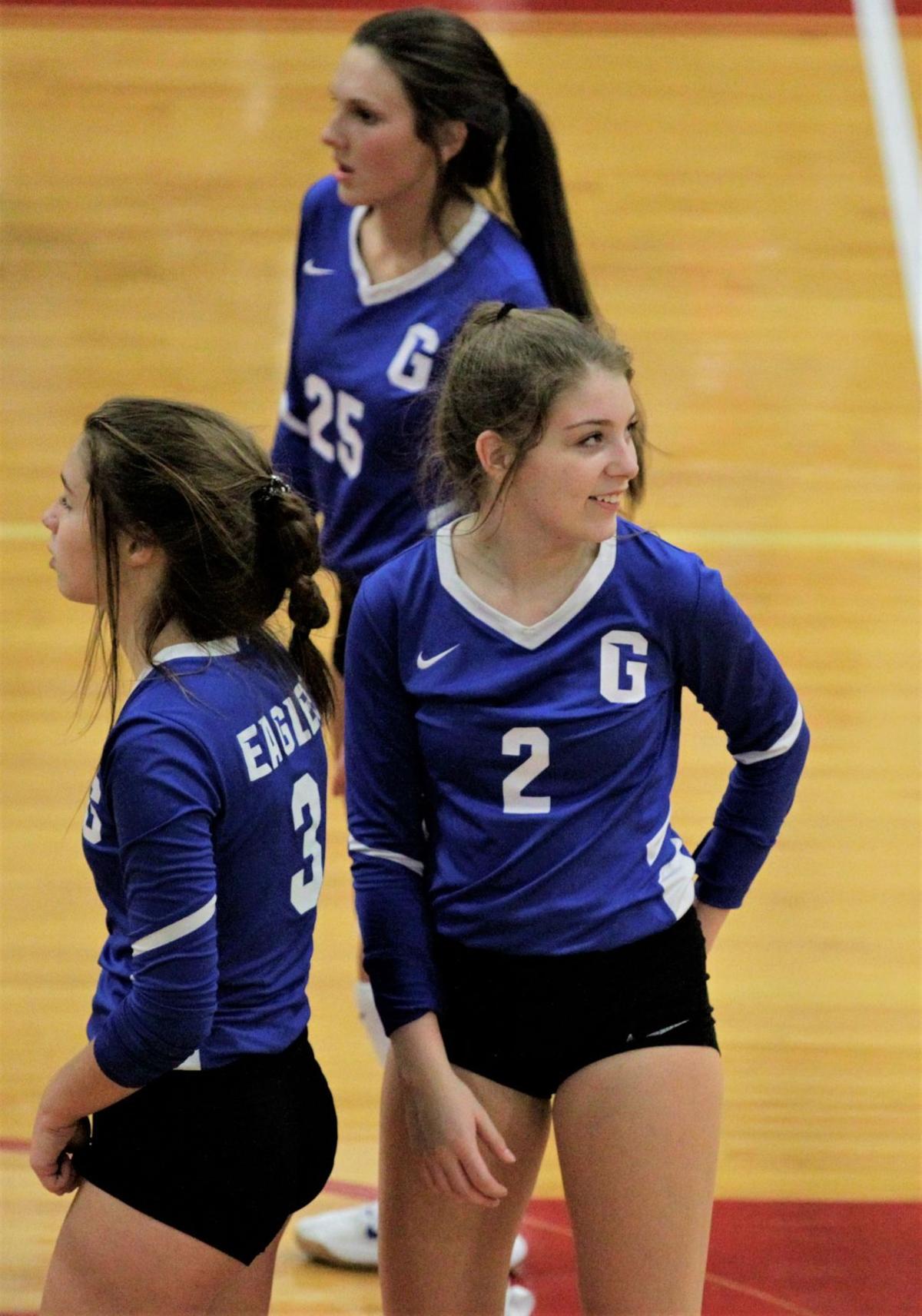 The state’s leader in total kills, Graves County’s Audrey Dowdy (2) had another 20 (with 20 digs) in Tuesday’s 3-1 season-ending loss to Marshall County in the First Region quarterfinals in Paducah.

Top-15 in the state in kills, Marshall County’s Halle Langhi (22) unofficially added another 18 to her resume on Tuesday night, in a 3-1 win over Graves County to advance into the 2020 First Region semifinals against McCracken County.

The state’s leader in total kills, Graves County’s Audrey Dowdy (2) had another 20 (with 20 digs) in Tuesday’s 3-1 season-ending loss to Marshall County in the First Region quarterfinals in Paducah.

And it did not disappoint.

In the second set, a Dowdy kill made it 3-1 before Langhi immediately responded with her own dunk, to make it 3-2. Later in the frame, Langhi would follow up a Dowdy spike with her own strong service — three aces in five points — to give Marshall County a 15-5 advantage. And up 19-12, Langhi would again answer with an undoubtable thud for an eight-point advantage.

In the third set, Dowdy followed up a Langhi strike to give the Lady Eagles a 13-12 lead. When Dowdy made it 15-12 on a shot from the left side and over two blockers, again, Langhi responded...over two defenders from the opposite side.

Dowdy would score again to make it 17-15, and then clinched Graves County’s only set win with a shot right at Langhi that caromed off into the stands.

In the end, the two unofficially combined for nearly 40 kills (Langhi with 18, Dowdy with 20), and a fun — perhaps unintentional duel — between them.

“She’s a really great player, and every time she got a kill, I felt like I had to get a kill to help my team,” Langhi said. “And as a team, we always talk about how we have to stop Audrey.”

A reasonable choice. Dowdy, who earlier this year surpassed both 1,000 career kills and 1,000 career digs, came into Tuesday’s matchup as the state’s leader in overall kills (444) and fourth in kills per set (5.55). Langhi, meanwhile, has been no slouch in the kills department, either, averaging 4.8 kills/set — 12th best in the state.

And much like Dowdy did all night, Langhi faced so many attempted blocks, only to blast through them with relative ease.

“I agree with (Halle),” Dowdy said. “I feel like if she gets a kill, I need to come back and score just as much as she can... Because I want be as good as everyone else, if not better.”

Simply put, if the ball came near either of them on the outsides on Tuesday night, it was safe to mark down a point.

“I feel like I get the most points on the outside,” Langhi added. “It just feels more comfortable for me. ... and I’m a strong hitter, and I feel like (teams) make sure that they block me. That’s how we are. You always want to pick out teams’ strongest players, and try to figure out how to stop them.”

Added Dowdy: “I believe, personally, tonight I didn’t play the best that I could, but it was one of my better matches of the season. Overall, I had a pretty good season ... and next season, I just want to focus on scoring as much as possible, and in as many different ways as possible. The line shot from the outside, scoring more crosses, harder tips, deeper points, and service aces.”

If Langhi and Dowdy improve heading into 2021, as they undoubtedly will, what a treat that would be for First Region volleyball.