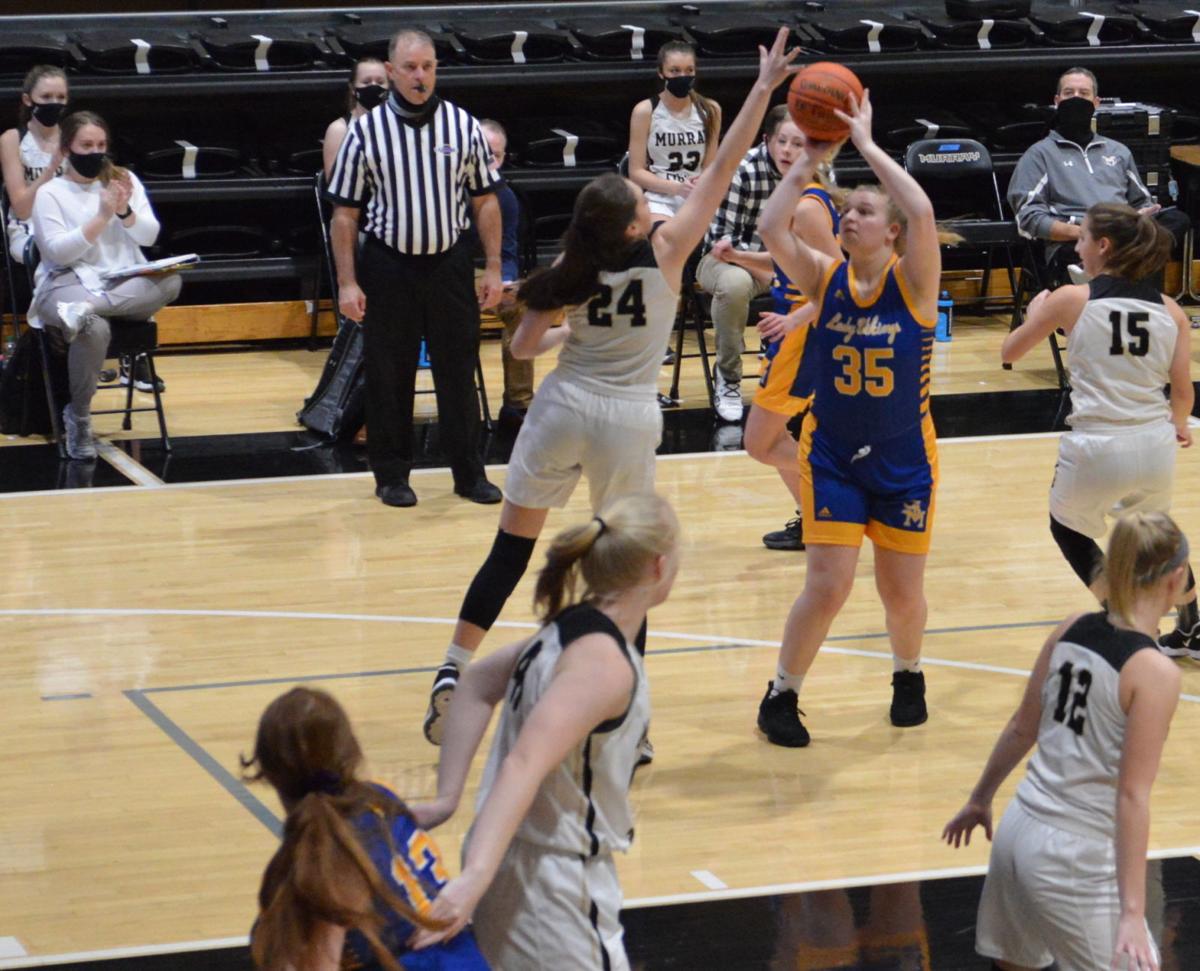 St. Mary senior Lillian Brown (35) looks to get off a shot against the outstretched arm of Murray’s Jade Oakley during Monday’s game. 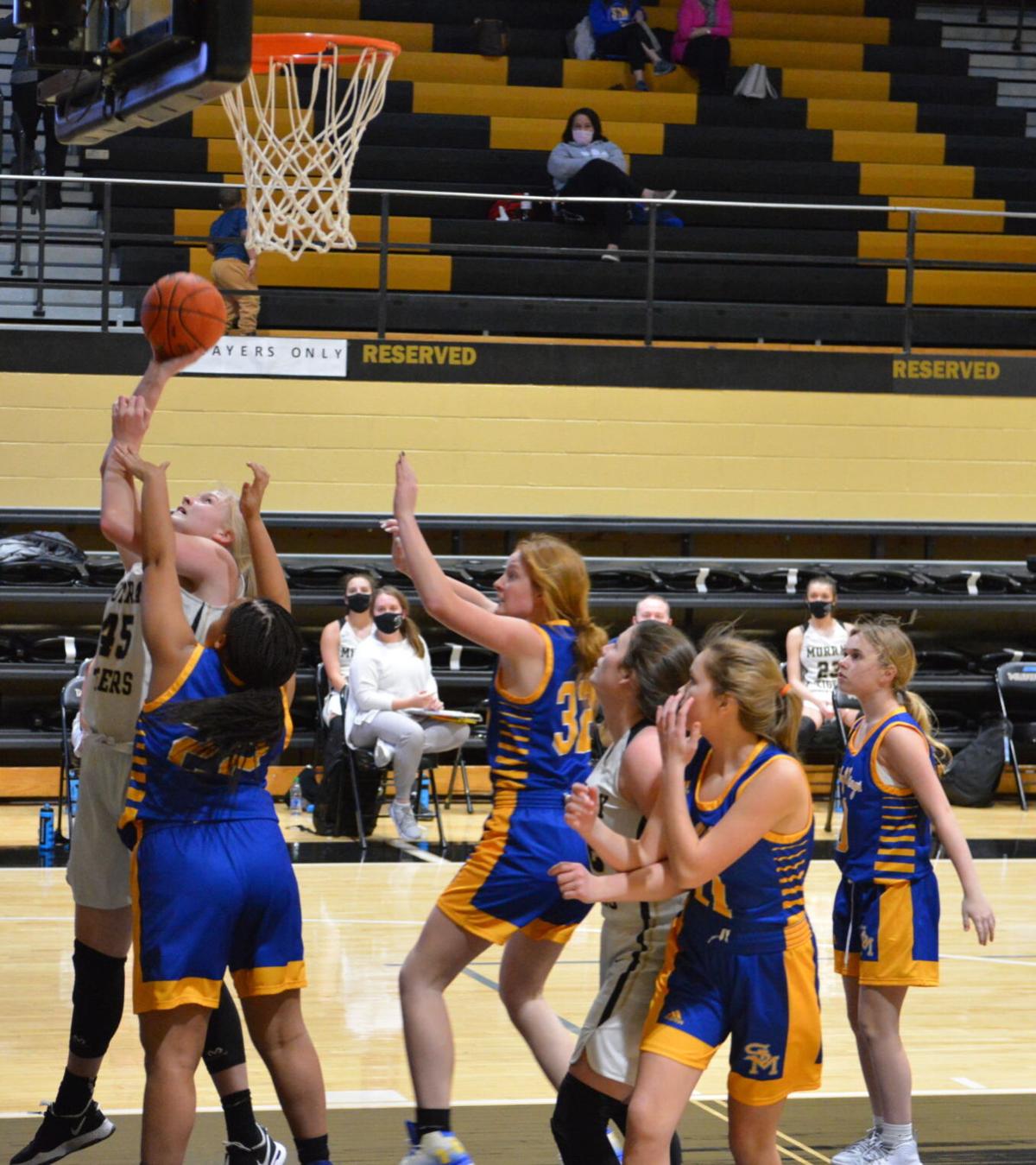 Murray sophomore Alyssa Daughrity gets inside positioning for a layup against St. Mary’s Jaylin Johnson and Anistyn Thomas during Monday’s game. Daughrity scored a team-high 14 points in the Lady Tigers’ 49-9 win.

St. Mary senior Lillian Brown (35) looks to get off a shot against the outstretched arm of Murray’s Jade Oakley during Monday’s game.

Murray sophomore Alyssa Daughrity gets inside positioning for a layup against St. Mary’s Jaylin Johnson and Anistyn Thomas during Monday’s game. Daughrity scored a team-high 14 points in the Lady Tigers’ 49-9 win.

MURRAY — Head coach Tom Foust had no idea just how well his Murray Lady Tiger basketball team would play on the defensive end of the floor Monday night against visiting St. Mary.

“No,” Foust said matter-of-factly when asked if, before the game, he thought his team would limit the Lady Vikings to single-digit scoring in what was an eventual 49-9 victory. “But we wanted to put this one away early.”

The Lady Tigers (2-1) did just that, jumping out to an early 8-0 lead en route to an 18-2 edge at the end of the first quarter and 32-3 halftime lead in the All “A” Classic Region 1 quarterfinal game.

“We just wanted to put a lot of pressure on the ball,” Foust said of his team’s defensive play, which generated numerous tie-ups and turnovers. “In our scouting report, we really focused in on matchups. It was hit or miss with some of the things we were trying to do, but the kids worked hard out there.”

Eighth-grader Caroline Crider scored all three first-half points for St. Mary (1-3) while senior Angela Gierhart and sophomore Alyssa Daughrity accounted for 10 points apiece in the opening half for Murray.

Sophomore Kaitlynn Burrus generated all six of St. Mary’s points over the final two periods to finish as the Lady Vikings’ leading scorer on the night. Daughrity (14 points) and Gierhart (13 points) led the way for Murray.

“It’s a work in progress with Alyssa. She’s thrust into a huge role, and she’s learning a little something every night. She’s figuring out how to get open in different ways,” Foust said. “Angela is a motor for us most nights. I hate that she has to do so much on both ends, but she’s always up to the task.”

Standing 6-foot-1, Daughrity used her height advantage to full effect Monday by corralling passes from her teammates near the basket for easy layups. Though she led the team in scoring, she was modest about her impact.

“I guess I did OK,” she said. “It’s nice being tall sometimes because it makes it easy for paint touches. With the guards passing into me, that’s a big help.”

Murray led 49-7 at the end of the third quarter and did not score in the fourth, which featured a continuously running clock.

With the win, the Lady Tigers advance to the tournament semifinals to play Hickman County on Thursday at Mayfield High School beginning at 6 p.m.

“It’s super important for us,” Daughrity said of the victory. “We’re trying as hard as we can, and this was a good game to motivate us and help us clean up some stuff to try and work on in practice for later in the tournament.”

“It’s huge,” he said. “That’s one of our goals this year is to see how far we can go in this thing. We’ve had a really good run at the All A tournament for the last decade, really, and we want to keep it going.”