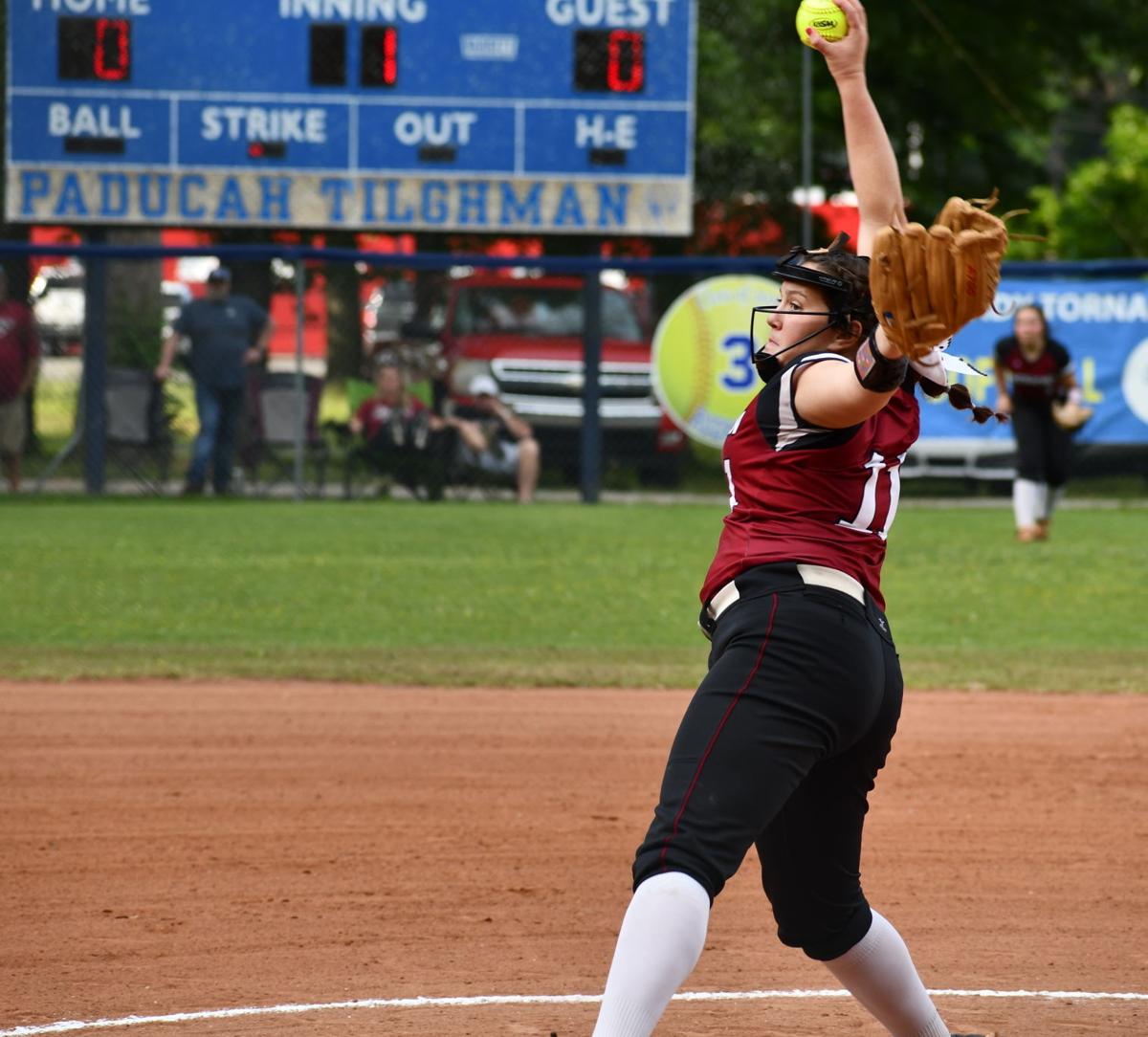 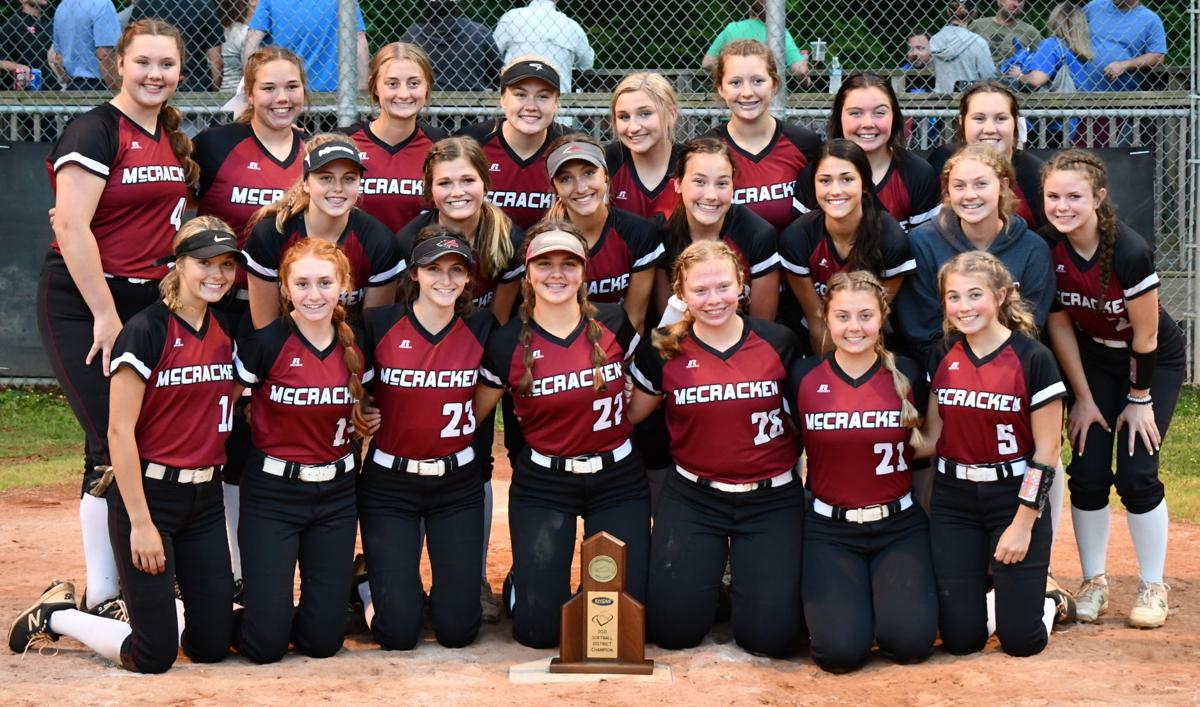 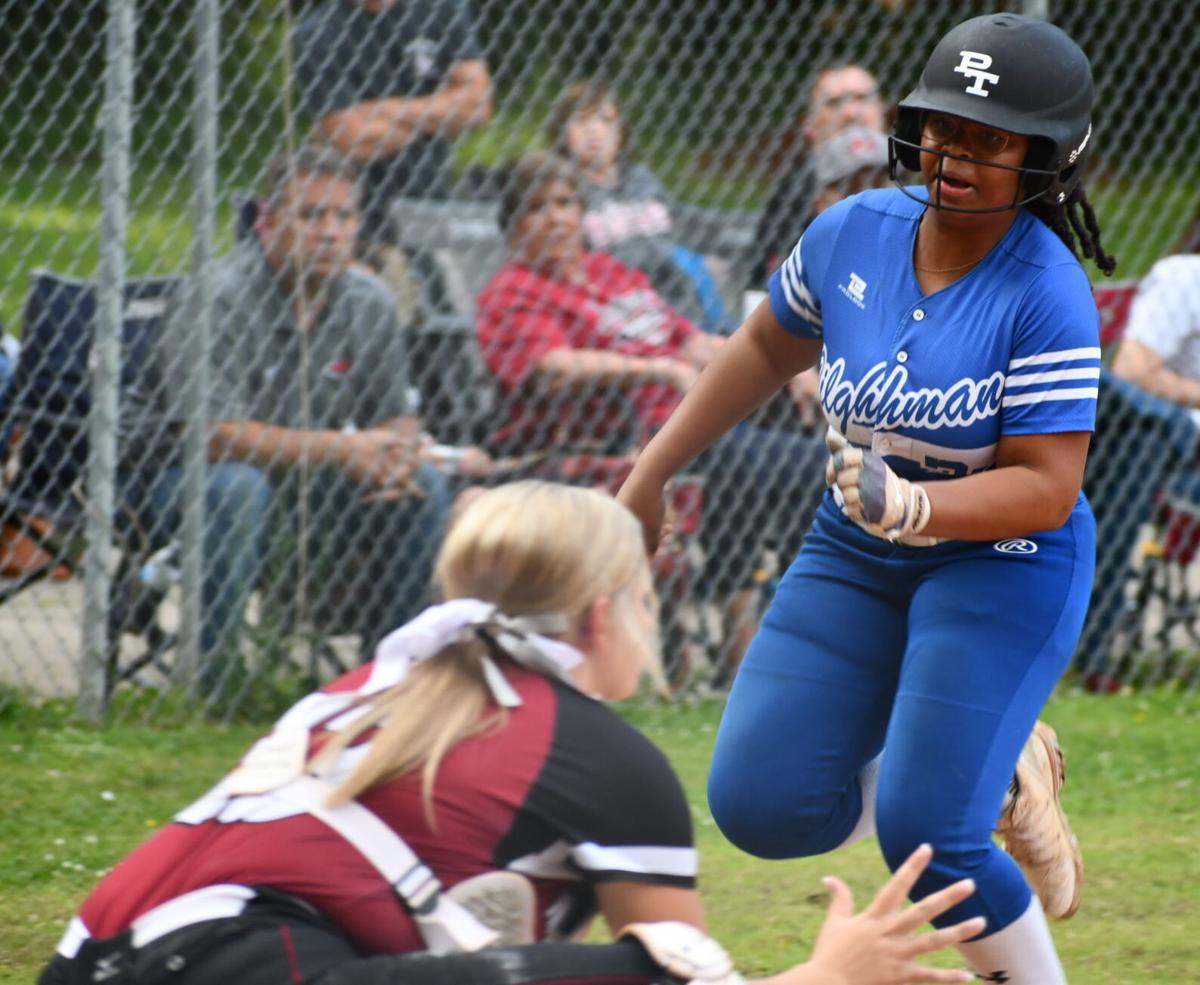 Above left: Paducah Tilghman’s Cristin Ware runs toward home plate as McCracken County catcher KG Walker awaits a throw in the first inning of Thursday’s game. Ware ended up being tagged out at the plate. Above right: McCracken County’s Abigayle Duren pitches during Thursday’s district championship game at Paducah Tilghman. Duren allowed four hits, no walks and no runs over 5 2/3 innings in the Lady Mustangs’ 8-1 win.

Above left: Paducah Tilghman’s Cristin Ware runs toward home plate as McCracken County catcher KG Walker awaits a throw in the first inning of Thursday’s game. Ware ended up being tagged out at the plate. Above right: McCracken County’s Abigayle Duren pitches during Thursday’s district championship game at Paducah Tilghman. Duren allowed four hits, no walks and no runs over 5 2/3 innings in the Lady Mustangs’ 8-1 win.

McCracken County’s bats got off to somewhat of a slow start in Thursday’s Second District softball championship game at Paducah Tilghman. But some standout pitching gave the Lady Mustangs plenty of time to wake up offensively en route to an 8-1 victory to claim the district title.

“This means a lot, especially since this is my senior year and how we didn’t get to play last year at all,” Lady Mustang pitcher Abigayle Duren said of the win.

Duren played a huge role in the victory, throwing an efficient 51 pitches over 5 2/3 innings and giving up four hits and no walks while striking out two in shutting out the Lady Blue Tornado (12-16) in that span. She was excited to have been given the opportunity to pitch in a big game.

“We didn’t know who was going to throw in this game, and when they gave me the ball, I was super pumped and ready to kick some Tornado butt,” she said.

Catcher KG Walker had a front-row seat to Duren’s performance in the circle and was highly complimentary of the outing.

“She’s a very good pitcher, and she hit her spots really well tonight,” Walker said. “She has good control and perfect speed, and when she hits her spots and her changeup is on, nobody can touch her.”

Ally Hutchins pitched in relief of Duren and allowed one run on two hits while striking out two over the final 11/3 frames.

The performance the Lady Mustangs (27-6) got from their pitchers was huge in light of the offense producing just three runs through the first five innings. It was a far cry from their 12-1 and 15-0 victories over Tilghman from the regular season.

“That pitcher — slow. And slow gets us,” Walker said. “But once we settled down and took control of our at-bats, we started to hit how we should.”

Walker was referring to the deliveries from Tilghman pitcher Reagan Hartman, who was facing the Lady Mustangs for the first time this season. She held McCracken mostly in check until ceding a five-run sixth inning. Overall, the freshman pitcher allowed the eight runs on 11 hits and five walks while striking out six over all six frames.

The Lady Mustangs started the scoring with two runs in the second inning on a one-out, two-RBI single from Bailey Watts after the first three batters — Annie White, Zoe Smithson and Izzy Story — loaded the bases via singles. Hartman worked out of that early jam with minimal damage and held McCracken scoreless over the next two frames.

Duren said she felt a little more pressure to continue pitching well with her team clinging to the slim 2-0 lead. She credited Watts with making some nice catches in the outfield.

“They were crowding the plate, so I couldn’t really throw inside, and I prefer to roll inside mostly,” she said. “So I threw it out, and my right fielder, Bailey Watts, saved it a lot. She played an epic game.”

The Lady Mustangs increased their lead to 3-0 after leading off the fifth inning with consecutive singles from Ariel Fox, Ally Hutchins and Walker that loaded the bases. A one-out RBI sacrifice fly from Smithson plated Fox, but the Lady Mustangs were unable to add anything else in the frame.

The McCracken offense finally broke through with the big five-run sixth inning.

An RBI groundout from Ashby Murt made it a 4-0 game, and Walker followed a pair of walks with a two-RBI triple to centerfield for what seemed like the final nail in the coffin.

“I went up there, and I was like, ‘I’m going to get a good hit. I’m not going to try to hit a home run, but I’m going to rock it into centerfield,’ ” Walker said of that at-bat. “She (the centerfielder) was playing up, and I knew I’d get a double or a triple. I’m not the fastest, but I was trying to zoom.”

That triple ended with a not-so-graceful slide into third base but was hugely effective nonetheless.

“That triple was epic even though the dive was not that pretty,” Duren said. “That was a game-changer because it showed us that, ‘Alright, we’ve got this in the bag now.’ ”

Two batters later, Smithson extended the lead to 8-0 with a two-RBI double.

Tilghman’s lone run came in the seventh inning with Hutchins in the circle. Hanna Scott led off and reached base after being hit by a pitch, and courtesy runner Ellie Brown came around to score on a double from Rosie Minter.

The Lady Tornado finished with six hits, two of which came from Scott.

“I think we can go far,” she said. “If we play as a team and hit to our ability and our defense plays tough, I think we’ve got this.”

All games will be played at Graves County High School.