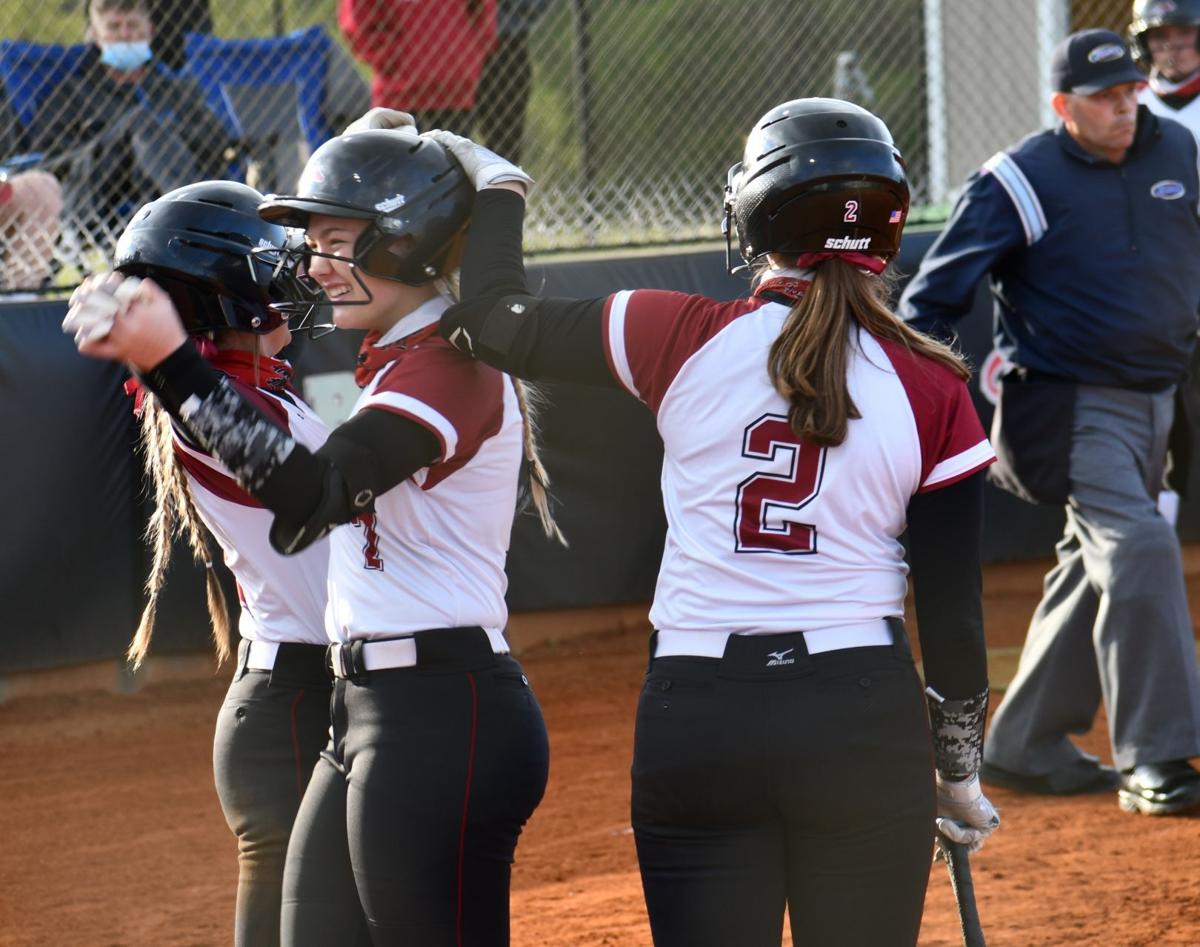 McCracken County sophomore Ally Hutchins (center) is congratulated by a pair of teammates after hitting one of her two home runs in Thursday’s game against Madisonville-North Hopkins. The Lady Mustangs hit a total of five homers in their 10-3 win. 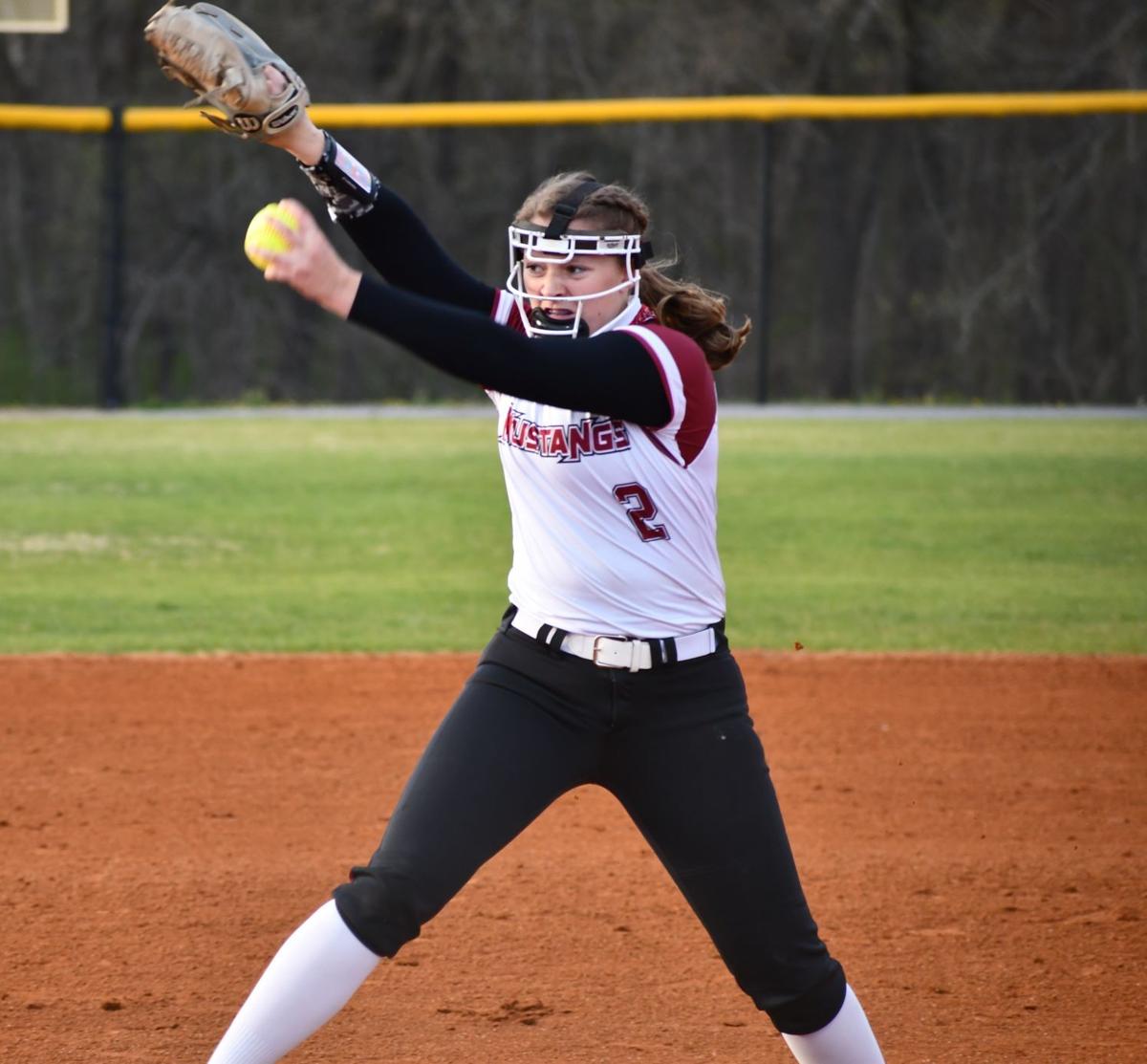 McCracken County sophomore Annie White winds up for a pitch during Thursday’s game against Madisonville-North Hopkins.

McCracken County sophomore Ally Hutchins (center) is congratulated by a pair of teammates after hitting one of her two home runs in Thursday’s game against Madisonville-North Hopkins. The Lady Mustangs hit a total of five homers in their 10-3 win.

McCracken County sophomore Annie White winds up for a pitch during Thursday’s game against Madisonville-North Hopkins.

Four McCracken County softball players earned a total of five free pizzas from Rocket Fired Pizza on Thursday night. How? By hitting the ball out of the ballpark.

“We’ve been waiting for them to start hitting like that,” McCracken head coach Tony Hayden said. “We’re a power-hitting team, there’s no doubt about that.”

The Lady Mustangs tallied nine hits, including five home runs, in their 10-3 win Thursday over visiting Madisonville-North Hopkins. And with Rocket Fired Pizza sponsoring a pizza reward to every Lady Mustang who hit a homer, those freebies started to add up throughout the game. Sophomore Ally Hutchins led the way in that department with a pair of home runs Thursday.

“Ally is going to be a great player,” Hayden said. “She has played a lot of good travel ball and is a good all-around player.”

Hutchins finished the game going 3-for-4 at the plate with a solo and two-run homer along with a single. Also getting free pizzas on Thursday were freshman K.G. Walker (home run, single, three RBIs), sophomore Izzy Story and senior Abigayle Duren. Walker’s homer was a two-run round-tripper while those from Story and Duren were solo shots. Sophomore Annie White also had a solid night at the plate, finishing with a double, a single and two RBIs.

“They (Madisonville) did something a lot of teams have been doing to us, and that’s throwing a little slower and making us wait, and we’re very anxious hitters. But our girls did what they were supposed to do tonight,” Hayden said.

White also put in a solid performance in the pitching circle. Over seven innings, she allowed the three runs on six hits, a walk and two hit batters while striking out seven.

“Annie did a good job,” Hayden said. “This is two games in a row she’s thrown real well. I was real pleased with her tonight.”

The Lady Mustangs (4-1) defeated the Lady Maroons (1-5) by an 11-2 score on March 29, and they scored double-digit runs again in Thursday’s rematch. They put up four runs in the first inning alone. Junior Ariel Fox led off the first frame with a walk, and Hutchins made it a 2-0 game with a one-out home run. White followed with a double and scored on Walker’s homer.

Duren’s solo home run in the second inning put McCracken up 5-0 before the Lady Maroons were able to get on the board with a two-run third frame. Junior Amber Osborne hit a two-out, two-run home run that also scored sophomore Zoe Davis, who finished with a pair of singles and three stolen bases.

The Lady Maroons made it a 7-3 game in the top of the fifth via an RBI double from sophomore Brenna Sherman.

McCracken closed out the scoring in the bottom of the sixth with a two-RBI single from White and an RBI single from Walker en route to the Lady Mustangs’ fourth win in their first five games of the season.

“I’m real pleased with our start to the season because we didn’t really know what to expect after not playing last year and with kids coming back and playing different positions,” Hayden said. “It’s been a work in progress, and it’s still going to be a work in progress. But we’re very pleased with how we’ve played.”